“Strout managed to make me love this strange woman I’d never met, who I knew nothing about. What a terrific writer she is.”—Zadie Smith, The Guardian

“Just as wonderful as the original . . . Olive, Again poignantly reminds us that empathy, a requirement for love, helps make life ‘not unhappy.’”—NPR

Prickly, wry, resistant to change yet ruthlessly honest and deeply empathetic, Olive Kitteridge is “a compelling life force” (San Francisco Chronicle). The New Yorker has said that Elizabeth Strout “animates the ordinary with an astonishing force,” and she has never done so more clearly than in these pages, where the iconic Olive struggles to understand not only herself and her own life but the lives of those around her in the town of Crosby, Maine. Whether with a teenager coming to terms with the loss of her father, a young woman about to give birth during a hilariously inopportune moment, a nurse who confesses a secret high school crush, or a lawyer who struggles with an inheritance she does not want to accept, the unforgettable Olive will continue to startle us, to move us, and to inspire us—in Strout’s words—“to bear the burden of the mystery with as much grace as we can.”

“Olive is a brilliant creation not only because of her eternal cantankerousness but because she’s as brutally candid with herself about her shortcomings as she is with others. Her honesty makes people strangely willing to confide in her, and the raw power of Ms. Strout’s writing comes from these unvarnished exchanges, in which characters reveal themselves in all of their sadness and badness and confusion. . . . The great, terrible mess of living is spilled out across the pages of this moving book. Ms. Strout may not have any answers for it, but she isn’t afraid of it either.”—The Wall Street Journal

An excerpt from Olive, Again

She had delivered the baby in the backseat of her car; her car had been parked on the front lawn of Marlene Bonney’s house. Marlene was having a baby shower for her daughter, and Olive had not wanted to park behind the other cars lined up on the dirt road. She had been afraid that someone might park behind her and she wouldn’t be able to get out; Olive liked to get out. So she had parked her car on the front lawn of the house, and a good thing she had, that foolish girl—her name was Ashley and she had bright blond hair, she was a friend of Marlene’s daughter—had gone into labor, and Olive knew it before anyone else did; they were all sitting around the living room on folding chairs and she had seen Ashley, who sat next to her, and who was enormously pregnant, wearing a red stretch top to accentuate this pregnancy, leave the room, and Olive just knew.

She’d gotten up and found the girl in the kitchen, leaning over the sink, saying, “Oh God, oh God,” and Olive had said to her, “You’re in labor,” and the idiot child had said, “I think I am. But I’m not due for another week.”

She rocked her foot up and down.

The big wristwatch of her dead husband, Henry, which she wore, and had worn since his stroke four years ago, said it was four o’clock. “All right then,” she said. And she got her jacket—it was June, but not warm today—and her big black handbag and she went and got into her car—which had that gunky stuff still left on the backseat from that foolish girl, although Olive had tried to clean it as best she could—and she drove to Libby’s, where she bought a lobster roll, and then she drove down to the Point and sat in her car there and ate the lobster roll, looking out at Halfway Rock.

A man in a pickup truck was parked nearby, and Olive waved through her window to him but he did not wave back. “Phooey to you,” she said, and a small piece of lobster meat landed on her jacket. “Oh, hell’s bells,” she said, because the mayonnaise had gotten into the jacket—she could see a tiny dark spot—and would spoil the jacket if she didn’t get it to hot water fast. The jacket was new, she had made it yesterday, sewing the pieces of quilted blue-and-white swirling fabric on her old machine, being sure to make it long enough to go over her hind end.

Agitation ripped through her.

The man in the pickup truck was talking on a cellphone, and he suddenly laughed; she could see him throwing his head back, could even see his teeth as he opened his mouth in his laughter. Then he started his truck and backed it up, still talking on his cellphone, and Olive was alone with the bay spread out before her, the sunlight glinting over the water, the trees on the small island standing at attention; the rocks were wet, the tide was going out. She heard the small sounds of her chewing, and a loneliness that was profound assailed her.

It was Jack Kennison. She knew this is what she had been thinking of, that horrible old rich flub-dub of a man she had seen for a number of weeks this spring. She had liked him. She had even lain down on his bed with him one day, a month ago now, right next to him, could hear his heart beating as her head lay upon his chest. And she had felt such a rush of relief—and then fear had rumbled through her. Olive did not like fear.

And so after a while she had sat up and he had said, “Stay, Olive.” But she did not stay. “Call me,” he had said. “I would like it if you called me.” She had not called. He could call her if he wanted to. And he had not called. But she had bumped into him soon after, in the grocery store, and told him about her son who was going to have another baby any day down in New York City, and Jack had been nice about that, but he had not suggested she come see him again, and then she saw him later (he had not seen her) in the same store, talking to that stupid widow Bertha Babcock, who for all Olive knew was a Republican like Jack was, and maybe he preferred that stupid woman to Olive. Who knew? He had sent one email with a bunch of question marks in the subject line and nothing more. That was an email? Olive didn’t think so.

“Phooey to you,” she said now, and finished her lobster roll. She rolled up the paper it had come in and tossed it onto the backseat, where that mess still showed in a stain from that idiot girl.

“I delivered a baby today,” she had told her son on the telephone.

“Did you hear me?” Olive asked. “I said I delivered a baby today.”

“Where?” His voice sounded wary.

“In my car outside Marlene Bonney’s house. There was a girl—” And she told him the story.

“Huh. Well done, Mom.” Then in a sardonic tone he said, “You can come here and deliver your next grandchild. Ann’s having it in a pool.”

“A pool?” Olive could not understand what he was saying.

Christopher spoke in a muffled tone to someone near him.

“Ann’s pregnant again? Christopher, why didn’t you tell me?”

“She’s not pregnant yet. We’re trying. But she’ll get pregnant.”

Olive said, “What do you mean, she’s having it in a pool? A swimming pool?”

“Yeah. Sort of. A kiddie pool. The kind we had in the backyard. Only this one is bigger and obviously super clean.”

“Why? Because it’s more natural. The baby slides into the water. The midwife will be here. It’s safe. It’s better than safe, it’s the way babies should be born.”

“As soon as we know she’s pregnant, we’ll start counting. We’re not telling anyone that we’re even trying, because of what just happened to the last one. But I just told you. So there.”

“All right then,” Olive said. “Goodbye.”

Christopher—she was sure of this—had made a sound of disgust before he said, “Goodbye, Mom.”

Elizabeth Strout is the #1 New York Times bestselling author of Lucy by the Sea; Oh William!; Olive, Again; Anything Is Possible, winner of the Story Prize; My Name Is Lucy Barton; The Burgess Boys; Olive Kitteridge, winner of the Pulitzer Prize; Abide with Me; and Amy and Isabelle, winner of the Los Angeles Times Art Seidenbaum Award for First Fiction and the Chicago Tribune Heartland Prize. She has also been a finalist for the PEN/Faulkner Award and the Orange Prize in London. She lives in Maine. 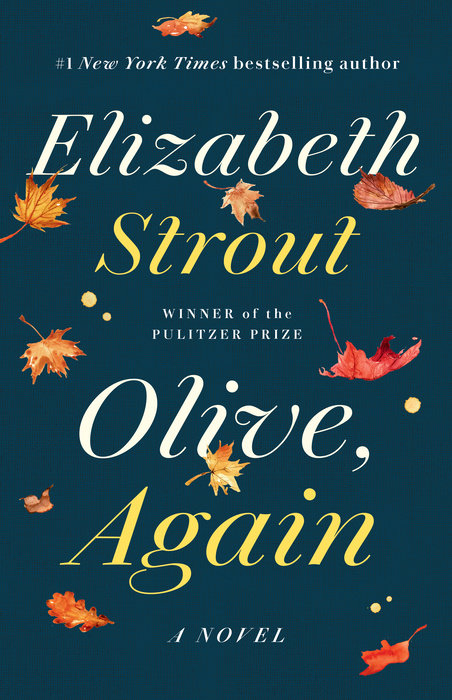