An Epic Journey into Greenland's Buried Past and Our Perilous Future

A riveting, urgent account of the explorers and scientists racing to understand the rapidly melting ice sheet in Greenland, a dramatic harbinger of climate change

“Jon Gertner takes readers to spots few journalists or even explorers have visited. The result is a gripping and important book.”—Elizabeth Kolbert, Pulitzer Prize–winning author of The Sixth Extinction

Greenland: a remote, mysterious island five times the size of California but with a population of just 56,000. The ice sheet that covers it is 700 miles wide and 1,500 miles long, and is composed of nearly three quadrillion tons of ice. For the last 150 years, explorers and scientists have sought to understand Greenland—at first hoping that it would serve as a gateway to the North Pole, and later coming to realize that it contained essential information about our climate. Locked within this vast and frozen white desert are some of the most profound secrets about our planet and its future. Greenland’s ice doesn’t just tell us where we’ve been. More urgently, it tells us where we’re headed.

In The Ice at the End of the World, Jon Gertner explains how Greenland has evolved from one of earth’s last frontiers to its largest scientific laboratory. The history of Greenland’s ice begins with the explorers who arrived here at the turn of the twentieth century—first on foot, then on skis, then on crude, motorized sleds—and embarked on grueling expeditions that took as long as a year and often ended in frostbitten tragedy. Their original goal was simple: to conquer Greenland’s seemingly infinite interior. Yet their efforts eventually gave way to scientists who built lonely encampments out on the ice and began drilling—one mile, two miles down. Their aim was to pull up ice cores that could reveal the deepest mysteries of earth’s past, going back hundreds of thousands of years.

Today, scientists from all over the world are deploying every technological tool available to uncover the secrets of this frozen island before it’s too late. As Greenland’s ice melts and runs off into the sea, it not only threatens to affect hundreds of millions of people who live in coastal areas. It will also have drastic effects on ocean currents, weather systems, economies, and migration patterns.

Gertner chronicles the unfathomable hardships, amazing discoveries, and scientific achievements of the Arctic’s explorers and researchers with a transporting, deeply intelligent style—and a keen sense of what this work means for the rest of us. The melting ice sheet in Greenland is, in a way, an analog for time. It contains the past. It reflects the present. It can also tell us how much time we might have left.

An excerpt from The Ice at the End of the World

Introduction
The View from Above

Late one afternoon in April 2015, I found myself standing on the side of a desolate airport runway in Kangerlussuaq, Greenland, looking west toward an overcast sky. Next to me stood a group of NASA employees, all of them scanning the same gray clouds. There wasn’t much small talk. As the temperatures dipped below freezing, we blew on our hands and kept our eyes fixed on the horizon. “We’re running late,” Luci Crittenden, a NASA flight operations engineer, finally declared. She looked down at her watch, then stomped her feet to keep off the chill.

Not long after, we heard a dull roar in the distance. And soon enough, we could see it coming—a stout-bellied U.S. Army C-130, trailing a plume of black exhaust. “Uh-oh, I think it’s on fire,” a woman standing next to me, Caitlin Barnes, remarked. I knew this was a joke—sort of. When the aircraft landed a few minutes later, the problem as far as I could tell wasn’t an overheated engine, but old age. The plane taxied down the runaway, made a quick hairpin turn, and came to a vibrating halt in front of us, its rotating propellers making a thunderous racket. If a dozen rusted rivets had popped off the fuse­lage, or if a wheel from the landing gear had rolled off, I would not have been surprised. The machine looked positively ancient.

No one said much. But then Jhony Zavaleta, a NASA project manager, yelled over the din: “Nineteen sixty-five!”

Apparently, this was the year the aircraft had been built. I wasn’t sure if Zavaleta was amazed by the fact or alarmed. And in some ways it didn’t matter now. For the next few weeks, barring any mishap, the C-130 would fly this group around Greenland, six days a week, eight hours a day. It had spent months in the United States being custom­ized for the task. Under the wings, belly, and nose cone were the world’s most sophisticated radar, laser, and optical photography instruments—the tools used for NASA “IceBridge” missions, like this one. The agency’s strategy was to fly a specially equipped aircraft over the frozen landscapes of the Arctic so that a team of scientists could collect data on the ice below.

The IceBridge program had come into existence at a moment when the world’s ice was melting at an astonishing rate. Our plane’s instruments would measure how much the glaciers in Greenland had thinned from previous years, but the trend was already becom­ing obvious: On average, nearly 300 billion tons of ice and water were lost from Greenland every year, and the pace appeared to be accelerating. Yet it was also true that hundreds of billions of tons meant almost nothing in the vast expanse of the Arctic. The ice covering Greenland, known as the Greenland ice sheet, is about 1,500 miles long and almost 700 miles wide, comprising an area of 660,000 square miles; it is composed of nearly three quadrillion—that is, 3,000,000,000,000,000—tons of ice. In some places, it runs to a depth of two miles.1 And so the larger concern, at least as I saw it, was not what was happening in Greenland in 2015, or even what might take place five or ten years hence. It was the idea that some­thing had been set in motion, something immense and catastrophic that could not be easily stopped.

Ice sheet collapse was not a topic of everyday conversations in New York or London. Even if you happened to know some of the more unnerving details—about rapidly retreating glaciers, for in­stance, or about computer forecasts that suggested the Arctic’s future could be calamitous—it was easier to think of the decline in ice as a faraway dripping sound, the white noise of a warming world. Still, by the time I signed on with the IceBridge team, the fate of the world’s frozen regions seemed to me perhaps the most crucial scientific and economic question of the age: The glaciers are going, but how fast? The ice disappearing from Greenland, along with ice falling off distant glaciers in Antarctica, would inevitably raise sea levels and drown the great coastal cities that a global civilization—living amidst the as­sumption of steady climates and constant shorelines—had built over the course of centuries. But again, the pressing question: How soon would that world, our world, confront the floods?

Not long after the C-130 landed, we clambered up a staircase and stepped into the passenger cabin. We entered a long, cavernous room with a grime-streaked floor that smelled strongly of engine oil. Elec­trical cables snaked up the walls. Arctic survival packs swung from a ceiling net. I noticed a crude, freestanding lavatory toward the back of the room; an old drip coffeemaker and microwave oven were se­cured to a table along the far wall, with Domino Sugar sacks piled high on a pallet underneath. Positioned in the center of the cabin, in front of several rows of seats, were banks of gleaming computer con­soles and high-resolution screens. And bolted to the floor was a mas­sive instrument that resembled a cargo container you might attach to the roof of your car to haul gear on a vacation. This was a laser tool—an altimeter—to measure the height of the ice below.

On the outside, the plane looked ready for the scrapyard. On the inside, it was a fortress of technology. I took another look around. The science team was already logging on to the computers, readying themselves for the schedule of flight missions that the IceBridge team would follow this year. The pilots, with fresh crewcuts, were introduced to us as aces recruited from the navy and air force. Then they, too, excused themselves so they could check the instruments in the cockpit and get ready.

The first flight, I was told, would leave the following morning at eight-thirty sharp. “Be here or be left behind,” John Sonntag, the mission leader and a native Texan, told me after we walked back out to the tarmac. Sonntag had been deployed to Greenland more times than he could properly recall. He had an easy manner, a friendly grin. But he meant what he said. The work was too important to accept delays. His team had come here, pretty much to the end of the world, to understand how and why trillions of tons of ice were melting into the ocean. They were not acting on the assumption that they would soon find out, but with each flight and yearly mission, the data piled up: ice lost; water gained. The goal was to gather more and more evidence in the hope that it would ultimately lead us toward an answer—before it was too late.

Jon Gertner is a journalist and historian whose stories on science, technology, and nature have appeared in a host of national magazines. Since 2003 he has worked mainly as a feature writer for The New York Times Magazine. His first book, The Idea Factory: Bell Labs and the Great Age of American Innovation, was a New York Times bestseller. A frequent lecturer on technology and science history, Gertner lives with his family in New Jersey.

An Epic Journey into Greenland's Buried Past and Our Perilous Future 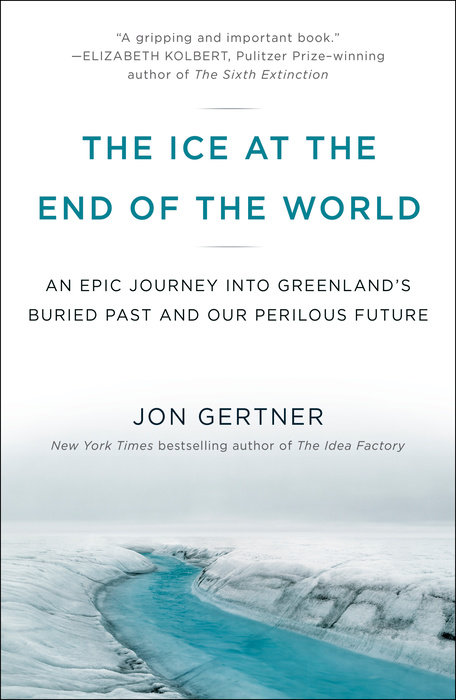