From the New York Times bestselling author of The Unlikely Pilgrimage of Harold Fry comes an exquisite love story about Queenie Hennessy, the remarkable friend who inspired Harold’s cross-country journey.

“This lovely book is full of joy. Much more than the story of a woman’s enduring love for an ordinary, flawed man, it’s an ode to messy, imperfect, glorious, unsung humanity.”—The Washington Post

A runaway international bestseller, The Unlikely Pilgrimage of Harold Fry followed its unassuming hero on an incredible journey as he traveled the length of England on foot—a journey spurred by a simple letter from his old friend Queenie Hennessy, writing from a hospice to say goodbye. Harold believed that as long as he kept walking, Queenie would live. What he didn’t know was that his decision to walk had caused her both alarm and fear. How could she wait? What would she say? Forced to confront the past, Queenie realizes she must write again.

In this poignant parallel story to Harold’s saga, acclaimed author Rachel Joyce brings Queenie Hennessy’s voice into sharp focus. Setting pen to paper, Queenie makes a journey of her own, a journey that is even bigger than Harold’s; one word after another, she promises to confess long-buried truths—about her modest childhood, her studies at Oxford, the heartbreak that brought her to Kingsbridge and to loving Harold, her friendship with his son, the solace she has found in a garden by the sea. And, finally, the devastating secret she has kept from Harold for all these years.

A wise, tender, layered novel that gathers tremendous emotional force, The Love Song of Miss Queenie Hennessy underscores the resilience of the human spirit, beautifully illuminating the small yet pivotal moments that can change a person’s life.

An excerpt from The Love Song of Miss Queenie Hennessy

All you have to do is wait!

Your letter arrived this morning. We were in the dayroom for morning activities. Everyone was asleep.

Sister Lucy, who is the youngest nun volunteering in the hospice, asked if anyone would like to help with her new jigsaw. Nobody answered. “Scrabble?” she said.

“How about Mousetrap?” said Sister Lucy. “That’s a lovely game.”

I was in a chair by the window. Outside, the winter evergreens flapped and shivered. One lone seagull balanced in the sky.

A patient nodded, and Sister Lucy fetched paper. By the time she’d got sorted, pens and a glass of water and so on, he was dozing again.

Life is different for me at the hospice. The colors, the smells, the way a day passes. But I close my eyes and I pretend that the heat of the radiator is the sun on my hands and the smell of lunch is salt in the air. I hear the patients cough, and it is only the wind in my garden by the sea. I can imagine all sorts of things, Harold, if I put my mind to it.

Sister Catherine strode in with the morning delivery. “Post!” she sang. Full volume. “Look what I have here!”

Sister Catherine passed several brown envelopes, forwarded, to a Scotsman known as Mr. Henderson. There was a card for the new young woman. (She arrived yesterday. I don’t know her name.) There is a big man they call the Pearly King, and he had another parcel though I have been here a week and I haven’t yet seen him open one. The blind lady, Barbara, received a note from her neighbor—­Sister Catherine read it out—­spring is coming, it said. The loud woman called Finty opened a letter informing her that if she scratched off the foil window, she would discover that she’d won an exciting prize.

“And, Queenie, something for you.” Sister Catherine crossed the room, holding out an envelope. “Don’t look so frightened.”

I knew your writing. One glance and my pulse was flapping. Great, I thought. I don’t hear from the man in twenty years, and then he sends a letter and gives me a heart attack.

I stared at the postmark. Kingsbridge. Straight away I could picture the muddy blue of the estuary, the little boats moored to the quay. I heard the slapping of water against the plastic buoys and the clack of rigging against the masts. I didn’t dare open the envelope. I just kept looking and looking and remembering.

Sister Lucy rushed to my aid. She tucked her childlike finger under the flap and wiggled it along the fold to tear the envelope open. “Shall I read it out for you, Queenie?” I tried to say no, but the no came out as a funny noise she mistook for a yes. She unfolded the page, and her face seeped with pink. Then she began to read. “It’s from someone called Harold Fry.”

She went as slowly as she could, but there were a few words only. “I am very sorry. Best wishes. Oh, but there’s a P.S. too,” said Sister Lucy. “He says, Wait for me.” She gave an optimistic shrug. “Well, that’s nice. Wait for him? I suppose he’s going to make a visit.”

Sister Lucy folded the letter carefully and tucked it back inside the envelope. Then she placed my post in my lap, as if that were the end of it. A warm tear slipped down the side of my nose. I hadn’t heard your name spoken for twenty years. I had held the words only inside my head.

“Aw,” said Sister Lucy. “Don’t be upset, Queenie. It’s all right.” She pulled a tissue from the family-­size box on the coffee table and carefully wiped the corner of my closed-­up eye, my stretched mouth, even the thing that is on the side of my face. She held my hand, and all I could think of was my hand in yours, long ago, in a stationery cupboard.

At the coffee table, Finty still scratched away at the foil window on her letter. “Come on, you little bugger,” she grunted.

“Did you say ‘Harold Fry’?” Sister Catherine jumped to her feet and clapped her hands as if she was trapping an insect. It was the loudest thing that had happened all morning, and everyone murmured “Oh, oh, oh” again. “How could I have forgotten? He rang yesterday. Yes. He rang from a phone box.” She spoke in small broken sentences, the way you do when you’re trying to make sense of something that essentially doesn’t. “The line was bad and he kept laughing. I couldn’t understand a word. Now I think about it, he was saying the same thing. About waiting. He said to tell you he was walking.” She slipped a yellow Post-­it note from her pocket and quickly unfolded it.

“Walking?” said Sister Lucy, suggesting this was not something she’d tried before.

“I assumed he wanted directions from the bus station. I told him to turn left and keep going.”

A few of the volunteers laughed, and I nodded as if they were right, they were right to laugh, because it was too much, you see, to show the consternation inside me. My body felt both weak and hot.

Sister Catherine studied her yellow note. “He said to tell you that as long as he walks, you must wait. He also said he’s setting off from Kingsbridge.” She turned to the other nuns and volunteers. “Kingsbridge? Does anyone know where that is?”

Sister Lucy said maybe she did but she was pretty sure she didn’t. Someone told us he’d had an old aunt who lived there once. And one of the volunteers said, “Oh, I know Kingsbridge. It’s in South Devon.”

“South Devon?” Sister Catherine paled. “Do you think he meant he’s walking to Northumberland from all the way down there?” She was not laughing anymore, and neither was anyone else. They were only looking at me and looking at your letter and seeming rather anxious and lost. Sister Catherine folded her Post-­it note and disappeared it into the side pocket of her robe.

I closed my eyes. A little later I felt the sisters hook their arms beneath me and lift my body into the wheelchair. It was like the way my father carried me when I was a girl and I had fallen asleep in front of the range. “Stille, stille,” my mother would say. I held tight on to your envelope, along with my notebook. I saw the dancing of crimson light beyond my eyelids as we moved from the dayroom to the corridor and then past the windows. I kept my eyes shut all the way, even as I was lowered onto the bed, even as the curtains were drawn with a whoosh against the pole, even as I heard the click of the door, afraid that if I opened my eyes the wash of tears would never stop.

Harold Fry is coming, I thought. I have waited twenty years, and now he is coming.

Rachel Joyce is the author of the Sunday Times and international bestsellers The Unlikely Pilgrimage of Harold Fry, The Love Song of Miss Queenie Hennessy, and Perfect. The Unlikely Pilgrimage of Harold Fry was short-listed for the Commonwealth Book Prize and long-listed for the Man Booker Prize and has been translated into thirty-six languages. Joyce was awarded the Specsavers National Book Awards New Writer of the Year in 2012. She is also the author of the digital short story A Faraway Smell of Lemon and is the award-winning writer of more than thirty original afternoon plays and classic adaptations for BBC Radio 4. Rachel Joyce lives with her family in Gloucestershire. 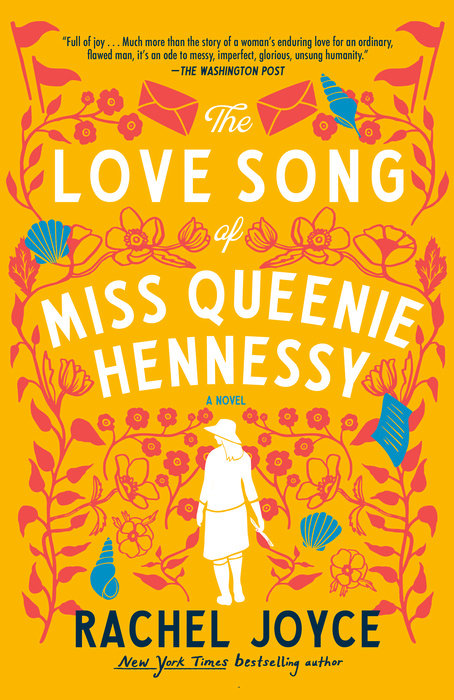