A Lizzy and Diesel Novel

NEW YORK TIMES BESTSELLER • Lizzy and Diesel are back in a wicked adventure from Janet Evanovich and Emmy Award–winning co-author Phoef Sutton.

Before he was murdered and mummified nearly a century ago, notorious bootlegger Collier “Peg Leg” Dazzle discovered and re-hid a famous pirate’s treasure somewhere along the coast of New England. A vast collection of gold and silver coins and precious gems, the bounty also contains the Stone of Avarice—the very item reluctant treasure seeker Lizzy Tucker and her partner, Diesel, have been enlisted to find. While Lizzy would just like to live a quiet, semi-normal life, Diesel is all about the hunt. And this hunt is going to require a genuine treasure map and a ship worthy of sailing the seven seas . . . or at least getting them from Salem Harbor to Maine.

Greed is eternal and insatiable, and Lizzy and Diesel aren’t the only ones searching for the lost pirate’s chest. People who have dedicated their entire lives to finding it are willing to commit murder or make a deal with the devil just to hold the fortune in their hands. One of those people may even be Wulf, Diesel’s deceptively charming and enigmatic cousin. Wulf desires the Stone of Avarice. He also desires Lizzy. It’s hard to say how far he’s willing to go to gain either one.

Wicked Charms is a swashbuckling adventure full of raiders, monkeys, minions, and mayhem. Lizzy and Diesel are going to have to do everything they can to keep their heads above water and hope they’re living a charmed life.

An excerpt from Wicked Charms

My name is Lizzy Tucker, and I live in a small, slightly tilted historic house that sits on a hill overlooking Marblehead Harbor in Massachusetts. I inherited the house from my Great-­Aunt Ophelia when I was twenty-­eight, and I’m not much older now. I share the house with a tiger-­striped shorthaired cat. When he was rescued from the shelter his tag said Cat 7143, and it’s stuck as his name. Cat has one eye, half a tail, and I’m pretty sure he was a ninja in a past life. I’m a Johnson & Wales culinary school graduate, and when I’m not being asked to save the world I work as a pastry chef at Dazzle’s Bakery in Salem.

It was ten o’clock at night, Cat and I were watching television in bed, and a big, scruffy, incredibly hot guy walked into my bedroom.

“Originally? Switzerland, but I was mostly raised in Southern California.”

“That’s not what I mean. What are you doing in my ­bedroom?”

He kicked his shoes off. “I’m undressing. And then I’m going to bed.”

“Extenuating circumstance,” he said, peeling off his shirt. “I’m between places of residence.”

“I don’t care if you’re between a rock and a hard spot. You can’t stay here.”

His jeans hit the floor. “Of course I can. We’re partners.”

“Don’t get your panties in a bunch. I have total ­self-­control.”

I leaned forward for a closer look. “Are those parrots on your boxers?”

Okay, I have to admit it. The whole package was cool. The guy’s name is Diesel. That’s it. Only one name. And the name suits him because he plows over you like a freight train. He’s over six feet of hard-­muscled male perfection. His dark blond hair is thick and sun-­streaked and perpetually mussed. His eyes are brown and unreadable. His smile is like Christmas morning. His attitude is deceptive—­casual on the outside but intense on the inside. His moral code is all his own.

“All right. You win,” I said, knowing there was no way I could physically remove him. “You can sleep on the couch.”

He stuck his thumb into the waistband on his boxers. “I don’t fit on the couch.”

Too late. The boxers were on the floor with his shirt and jeans.

I clapped my hands over my eyes. “I can’t believe you just did that.”

I have a queen-­size bed. Plenty big enough for me and Cat. Not big enough for me and Cat and Diesel. Truth is, I wouldn’t mind getting romantic with Diesel, but we have an odd relationship. Diesel isn’t normal. And it would seem that I’m not normal, either. I thought I was normal until Diesel popped into my life shortly after I moved to Marblehead. Now weird is the new normal.

The way Diesel tells it, there are some people on Earth who have enhanced abilities that can’t be explained in ordinary ways. They might be useful abilities, such as Diesel’s talent for opening locks. Or they might be hellacious powers, such as calling down lightning or levitating a garbage truck. Crazy, right? It gets even better. Supposedly there are seven ancient stones that hold the powers of the seven deadly sins. They’re known as the seven SALIGIA Stones. If these stones fall into the wrong hands, all hell will, quite literally, break loose. I’m one of two people in the world who have the ability to locate the stones. Sort of like a human divining rod. Lucky me. So far, Diesel and I have acquired two of the stones, nearly getting blown up and kidnapped and chopped into tiny pieces with a broadsword in the process. When we find a stone, Diesel sends it off to some higher power for safekeeping. At least that’s his story.

“We’re not supposed to sleep together,” I said.

“Sleeping is okay. Getting busy not so much.”

Turns out if two people with enhanced abilities get busy, one of them will discover that their special powers have gone up in smoke. If I could be sure it was my special powers that would disappear, I’d be happy to take one for the team. But what if it was Diesel who got cleaned out? I’d be on my own to save the world. This wouldn’t be a good thing.

I grabbed a pillow and put it between us. “Just to be safe,” I said.

“Sweetheart, if I decide to risk my abilities, that pillow isn’t going to save you.”

My alarm went off at four-­fifteen in the morning, and I rolled over into Diesel. He was deliciously warm, he smelled like gingerbread cookies, and the pillow was missing.

“Something’s poking at me under the covers,” I said. “That better not be what I think it is.”

“Maybe you should take a look just to be sure you’ve identified it correctly.”

“That would be awkward.”

“I could deal,” Diesel said.

I sensed him smile in the dark room. “No doubt.”

He moved over me and kissed me. There was some tongue involved, and heat flooded into every part of me. So maybe I could save the world on my own if it came down to that, I thought. Maybe I didn’t care if one of us lost our abilities. Maybe I just cared about running my hands over every fantastic part of him, and then following it with my mouth, and then the inevitable would happen. Oh boy, I really wanted the inevitable.

He slipped out of bed and got dressed in the clothes that were lying on the floor. “There’s a problem,” he said.

Janet Evanovich is the #1 bestselling author of the Stephanie Plum novels, the Fox and O'Hare novels, the Knight and Moon novels, the Lizzy and Diesel series, the Alexandra Barnaby novels, and coauthor of a graphic novel, Troublemaker, with her daughter, Alex.

Phoef Sutton is a writer, producer, and novelist who has written for shows such as Cheers, NewsRadio, and Boston Legal. Sutton is also the winner of two Emmy Awards, a Golden Globe, and a Peabody Award.

A Lizzy and Diesel Novel 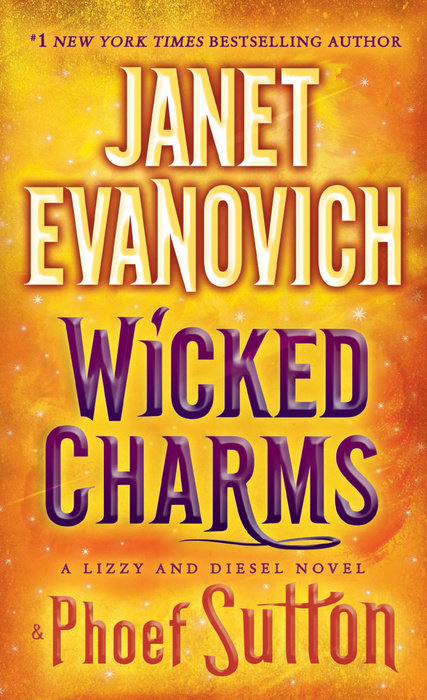