NEW YORK TIMES BESTSELLER • After The Black Elfstone and The Skaar Invasion comes the penultimate volume in the Fall of Shannara, a saga more than four decades in the making.

The Skaar have arrived in the Four Lands, determined to stop at nothing less than all-out conquest. They badly need a new home, but peaceful coexistence is not a concept they have ever understood. An advance force under the command of the mercurial princess Ajin has already established a foothold, but now the full Skaar army is on the march—and woe betide any who stand in its way.

But perhaps the Skaar victory is not quite the foregone conclusion everyone assumes. The Druid Drisker Arc has freed both himself and Paranor from their involuntary exile. Drisker’s student, Tarsha Kaynin, has been reunited with Dar, chief defender of what is left of the Druid order, and is learning to control her powerful wishsong magic. If they can only survive Tarsha’s brother, Tavo, and the Druid who betrayed Drisker Arc, they might stand a chance of defeating the Skaar. But that is a very big if . . . as Tavo now carries the Stiehl—one of the most powerful weapons in all the Four Lands—and is hellbent on taking his revenge on everyone he feels has wronged him.

An excerpt from The Stiehl Assassin

A winter tableau, stark and compelling.

Not a hundred yards from the west gates of the fortress walls of Paranor, a small clearing is revealed within the giant old growth, barely visible through the curtain of new snowfall. An earlier snow leaves the clearing and the surrounding forest in a foot-deep covering of white. Darkness no longer shrouds the world, as the night has diminished and the first glimmerings of dawn have surfaced on the distant horizon.

All is silent in the forest; birds and animals alike have gone still.

All is sleep-claimed and frozen in place; there is an unnatural feeling to the air as Tavo Kaynin staggers forward, thrown off balance by the force of his thrust.

He has slipped from hiding, crept up on his sister from behind, bearing in his hand the legendary blade known as the Stiehl, and has driven it through her back. The killing blow is the culmination of a journey he has pursued since he decided that she betrayed him through abandonment and neglect and therefore must die. The satisfaction he feels when he strikes her down is immense, a release of pent-up frustration and rage that has haunted him for weeks. Here, at last, is an end to it. Here, at last, is the revenge he has been seeking.

Yet even as he revels in his success, he experiences an unexpected sense of loss. His sister is the last of his family, the last connection to anything from his old life, and a sudden welling-up of doubt and deep mistrust of his own feelings infuses him. By killing her, he brings about a desperately needed resolution to his madness. Or does he? What has he truly done?

A split second later, his feelings are scattered to the winds blowing softly around him.

Something is wrong, he realizes.

His weapon and arm have both passed completely through her body, have found no substance but only empty air. He staggers off balance now as a result, his momentum unhindered by his anticipated encounter with flesh and blood—by a solidity he should have found from driving his knife into her body. Instead, she is no longer even in evidence—she has vanished entirely—and he realizes instantly that he is mistaken about everything.

“Stand where you are!” Drisker Arc hisses as he wheels toward Tavo.

Tavo tries to regain his feet and flee, but the Druid is already on top of him, his hands fastening about his arm, wrenching it so violently that the Stiehl drops into the snow and disappears. At the same time, he sees that his sister stands to the other side of the Druid, unharmed and watching in shock.

He has been tricked.

He responds instinctively, lashing out at the Druid and his sister and their two companions—the Blade and the Elven prince—summoning the magic of his wishsong. But his voice is stilled before any sound can gather sufficient force to save him. He manages but one small croak before the Druid has hold of his throat and has closed off his windpipe. Air wheezes from his lungs, but it is not nearly enough to do more than produce a truncated gasp. He thrashes and squirms in his captor’s grip, but he cannot break free.

Everything begins to go black.

“Dar Leah!” the Druid calls out sharply, and the Blade is there instantly. “Take him from me.”

Tavo is gripped immediately by new hands and pulled down into the snow. A blade presses up against his throat, the sharp edge cutting into his skin. The implication is clear. If he moves, he will die. He sees how matters stand, and while a fresh wave of rage and frustration surges through him, he knows better than to test that blade. He goes limp in those strong hands and hopes that Clizia will save him.

Drisker has placed himself in front of Tarsha, and the Elven prince has moved up beside him. Together, they present a wall of defense against whatever Clizia Porse might choose to do. It seems to Tavo that she will choose to do nothing but will instead disappear back into the night. Why shouldn’t she? Tavo would, if their places were reversed. He has failed her completely. He has disobeyed her instructions to kill the Druid first and Tarsha after, and as a result he has been defeated entirely. The Druid witch is a demanding mistress and she will see him as both an ineffective and an unnecessary ally. She will not risk herself further.

His head sinks in despair.

Moments pass, and nothing happens. She is already gone, he thinks. The clearing has turned silent with fresh expectation, the snowfall growing heavier and the dawn’s light fading back into deepest gray as a result. Breath from those gathered about him clouds the air in white puffs, and a small shifting of bodies provides the only evidence that all is not frozen solid.

Drisker Arc contradicts him at once. “She is here.”

The truth is quick to show itself as the words leave his lips. A massive wind arises out of nowhere, surging through the little clearing, emerging from the woods with rage and purpose, whipping against the poised figures with such violence that they stagger back several steps in response to the battering, ducking their heads protectively. The darkness deepens and the howling of the sudden wind reaches an ear-shattering crescendo.

She comes for me, Tavo thinks, elated.

But the blade still presses up against his neck, and his magic still will not respond to his efforts to summon it, so his own attempts to free himself fail as the hands of his captor tighten further.

Shadows gather and close around him, and the Druid makes warding gestures that summon blue lines of magic to pulse and shimmer against the dark. The little company huddles watchfully in the teeth of the wind, keeping one another and Tavo close, letting no one come at them unexpectedly.

Then finally the Elf brings out his talismanic stones, and light flashes out into the woods. Drisker comes to his feet, prepared to lash out, but the Elfstones find nothing of Clizia close by, their brightness ending not two dozen feet into the gloom. An instant later the wind dies, the shadows disappear, and the world returns to what it was in the early-dawn light.

“For now, yes,” the Druid agrees. “She has hidden herself to prevent us from finding her. This magic is ancient and strong enough even to thwart the Elfstones. Very rare.”

They all rise, the Blade dragging Tavo up with him. They all stand together to look off into the forest, making sure they are not mistaken. But the silence of the forest is deep and unbroken; Clizia Porse has fled.

“What was that about?” the Blade asks.

“Whatever it was, it failed,” the Elf offers, kicking snow from his boots.

Next to them, Tavo is aware that Tarsha is looking over at him, and he cannot bring himself to meet her gaze. He is unable to face what he knows he will see in her eyes. Enraged as he is by his failure to kill her, he is also unexpectedly ashamed that he even thought to try. A new consciousness is seeping through him—one that is making him question everything he believed was true. Fluken is nowhere to be found, his voice stilled. All his advice now seems empty and self-serving. If Fluken were truly a friend, he would be there to help Tavo. He would be standing by Tavo as he has repeatedly claimed he would. But Fluken does not live up to his promises. He flees with the witch, a faithless liar.

“She did not fail,” Drisker says suddenly, breaking the silence. He is nudging the snow in front of him with his boot. “She did exactly what she intended to.”

He kneels down and musses the snow about with his gloved hand for a moment, then looks up. “She regained the Stiehl.” 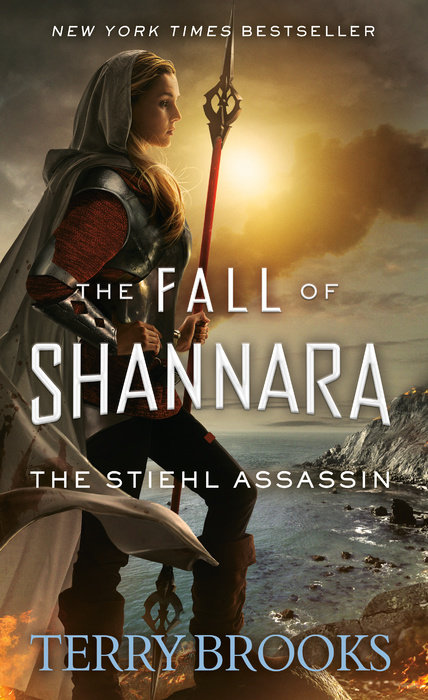