A Multilayered Love Story . . . with Recipes

“Honey, you are 300 sandwiches away from an engagement ring.”

When New York Post writer Stephanie Smith made a turkey and Swiss on white bread for her boyfriend, Eric (aka E), he took one bite and uttered those now-famous words. While her beau’s declaration initially seemed unusual, even antiquated, Stephanie accepted the challenge and got to work. Little did she know she was about to cook up the sexiest and most controversial love story of her generation.

300 Sandwiches is the story of Stephanie and E’s epic journey of bread and betrothal, with a whole loaf of recipes to boot. For Stephanie, a novice in the kitchen, making a sandwich—or even 300—for E wasn’t just about getting a ring; it was her way of saying “I love you” while gaining confidence as a chef. It was about how many breakfast sandwiches they could eat together on future Sunday mornings, how many s’mores might follow family snowboarding trips, how many silly fights would end in makeup sandwiches. Suddenly, she saw a lifetime of happiness between those two slices of bread.

Not everyone agreed. The media dubbed E “the Internet’s Worst Boyfriend”; bloggers attacked the loving couple for setting back the cause of women’s rights; opinions about their romance echoed from as far away as Japan. Soon, Stephanie found her cooking and her relationship under the harsh glare of the spotlight.

An excerpt from 300 Sandwiches

My parents met over sandwiches.

Sporting an Afro and a black pantsuit, the 1975 version of my mother, Jeanette, walked into a White Castle on Main Street in Orange, New Jersey, for some post-­clubbing eats. She immediately recognized the guy ahead of her in line. They’d grown up together, lived on the same block, gone swimming at the local park together. Art—­the version who had yet to become my father—­wore Coke-­bottle glasses, a bell-­bottom suit, and a mustache so thick you could do pull-­ups off it.

My father paused. “Hmmm,” he said, thinking of his smoothest line: “I don’t know the name, but anyone as fine as you, I should know her name.”

As they waited for sliders (before sliders were a thing), they exchanged phone numbers and agreed to go out.

On their first date, my father picked my mother up at her house in a “loud, souped-­up” red Dodge Charger.

“It was so loud that when he started the car, you shook in your seat,” my mother has said.

Her friends Debbie and Pam were also at the house, and the three of them packed a roadie of Scotch in their purses before they went out.

My father took my mother and her two friends to dinner in Manhattan, double-­parking the loud Charger. When they were finished, Dad took the friends home, and he and Jean drove around and talked.

“What would you say if I asked you to marry me?” Dad said.

“Will you give me everything I want?” answered my mom.

“I’ll give you everything in my power.”

“Sure, why not?” Mom said. He pulled up in front of my mom’s house, dropped her off, and drove home.

“I thought he was just joking, or just saying that to get in my pants,” Mom told me later. I asked Dad about proposing on the first date. He said, “I knew what I wanted.”

When I moved to New York, I knew what I wanted: a job.

I was a child of the ’80s and ’90s, Chicago-­raised—­my folks moved there six years after their fateful meeting. I cheered for the Bulls and Bears, learned about pop culture and politics from MTV, and spent more time worrying about my next volleyball practice than about whether or not boys liked me. I had a Cosby Show upbringing, except that the Brooklyn brownstone was replaced by a two-­story home in a subdivision in the mall suburbs of Chicago.

I wasn’t a nerd, but I was a Goody Two-­shoes who followed rules and listened to my parents and rode my bike, up and down the safe streets lined with station wagons and American-­made sedans, until the street lights would come on.

My house was typical suburban living. And my parents were a happy co-­parenting couple. My dad, no longer the player who met my mom, was a man of two worlds. During the week, he was Corporate Joe; he wore suits and carried a briefcase and commuted to downtown Chicago to his banking job. If he wasn’t working in Chicago, he was flying every Monday morning to a different state for work and flying home on Friday night in time for dinner. We turned driving back and forth to the airport into quality family time, listening to talk radio in the mornings or Soul II Soul singing “Back to life, back to reality” on the extended remixed cassette single (it was the ’90s, people), and telling Dad what he’d missed at home during the week on Friday nights.

When he arrived home, Corporate Joe transformed himself into Country Joe—­trading his suit and briefcase for flannel shirts and Dockers and fishing poles or shotguns.

My father, who was in the United States Navy for four years before he kicked off his career, can best be described as woodsy. He hunted deer, elk, quail, pheasant, and whatever else ran wild in the upper half of the country. He fished regularly, and bought me my first fishing pole—­one of those red stick poles with no reel—­when I was four. We had a small cabin in Michigan, on a lake in an unincorporated small town outside of Kalamazoo, where he loved getting away to fish or hunt. His Jeep or Blazer or pickup truck was always full of fishing tackle, camouflage overalls, poles, and duck calls. He taught me to swim, to bait my own hooks and properly cast a reel, to drive a boat on the water and back up a trailer to pick up a boat at the dock.

One of his proudest moments was when I caught a twenty-­pound catfish with that rod by bobbing the bait into the water near the dock. The fish was so large it almost pulled me in. Dad scrambled over to grab the pole and helped me pull up the writhing animal. “I got it! Hold on!” he screamed. Before Dad could reach for the net, the fish snapped my frail pole in half. He thrust his hand into the water to grab the fish with his bare hands, but it slipped away. “Wow, Stephie!” he said, out of breath. “That was a big fish! You almost had him!” To this day, he tells the story to friends as if I did.

My mother, Jeanette, was not a minivan type of mom—­she drove a Camaro. A Z28 steel-­gray Camaro. I don’t remember many other moms picking their kids up from playgrounds in sports cars back then, but I will never forget her obsession with getting a T-­top. She sat behind the wheel wearing aviator sunglasses and a wide smile, her fluffy black Farrah Fawcett hair blowing in the breeze, whipping around the streets of our subdivision on our way back home.

Jeanette ran the home like a boss. Mom believed she could be an equal partner in her marriage if she took care of the home while Dad was the breadwinner. That’s what her generation did. She took pride in having a neat and orderly house, where the laundry was folded at all times, the carpet was freshly vacuumed, and something warm and filling was cooking in the kitchen. She made cookies for the school bake sales and was a member of the PTA. She packed for vacations a week in advance, always had a week’s worth of groceries in the fridge, and never let her car have less than half of a tank of gas in it. My mother was ready for anything.

But she also relished playtime, and she was a top member of the village bowling league. True story: My mother was recruited to join the team after she bowled a 260 during her very first outing. Twenty years later, we still stay up until 1:00 a.m. bowling on Nintendo Wii. “Still got it,” she said once, as she beat me in the final frame.

Mom went all out for the holidays, putting up decorations and buying gifts. Anything I wanted, I got. Remember that Christmas of 1984, when people were looting toy stores across the country to buy their kids Cabbage Patch Dolls? Moms were fighting in parking lots to get their hands on those scrunch-­faced dolls. And guess who got TWO for Christmas that year? This girl!

Mom went back to work when I hit middle school, eventually launching her own property management firm. Yes, the boss of her own firm. “I stayed in the workforce just in case something happened to my husband,” she said, again ready for anything. Even then, she always had a hot meal ready for us when we came home. Always putting our needs first.

My parents have had a great marriage that’s lasted almost forty years. My father always kissed my mother good-­bye before he left for work, and always hugged and kissed her first thing when he came back home. Always.

Dad also called once or twice a day to check in at home, every time closing the conversation with “I love you.” I only recall them fighting once, at the airport, over something really silly, and I remember my father buying roses and apologizing profusely afterward.

Through the years, no matter what challenges they faced, Mom and Dad always spoke positively of their marriage, and of the institution. They never pressured me to find a husband and have kids, though they wanted those things for me when I was ready. They wanted me to start a career, travel, experience life, and marry someone who was a loyal, loving match.

As well as my father provided for our family, Mom still put a lot of emphasis on being independent. “Don’t rely on a man,” she always said. “You can get married and fall in love and all, but don’t rely on a man for your existence.”

This was deeply ingrained in my psyche, so deeply that I stayed focused on schoolwork and only had one sort-of serious boyfriend in high school, and that guy was afraid to come over because my dad kept hunting rifles in a gun closet in our living room—­locked up and unloaded, but present. That boyfriend, the nice, smart, athletic boy who’d had a crush on me since fourth grade, only saw me in class. The one time he came to my house was Christmas during our sophomore year of high school, when he dropped off a gift for me. He was so nervous he couldn’t sit still the twenty minutes he was there, and then ran out of my house, forgetting to take home the gift I’d given him.

A few years later, I got into Northwestern University and studied journalism. I had your typical college hookups, but very few relationships. There were sorority date parties at the Texas Star Fajita Bar downtown or the Green Dolphin Street jazz club. But most of my college dates were focused on loftier goals, such as getting two PhDs before turning twenty-five, or running for office, or turning pro. One guy asked me out twice, and canceled both times at the last minute—after I already had my date-night outfit perfectly pressed—for meetings with NFL scouts.

A Midwestern girl living in New York, Stephanie Smith is a New York Post Page Six reporter and writer whose blog, 300 Sandwiches, made her an Internet sensation. She is a self-described foodie with a love for chocolate, sushi, and pork buns. This is her first book.

A Multilayered Love Story . . . with Recipes 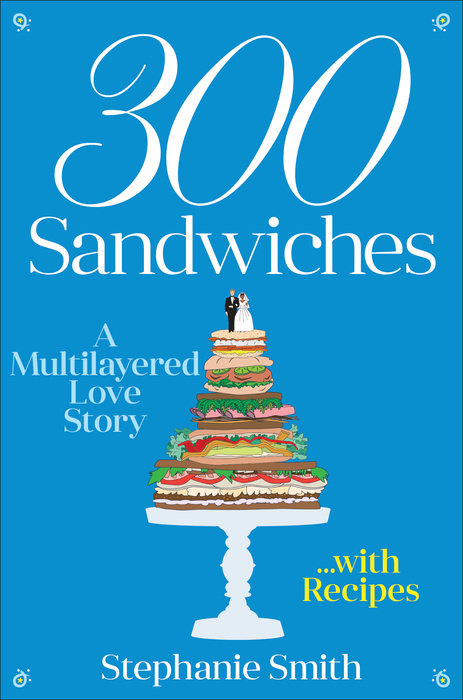