Abraham Lincoln and the American Struggle

“In his captivating new book, Jon Meacham has given us the Lincoln for our time.”—Henry Louis Gates, Jr.

ONE OF THE BEST BOOKS OF THE YEAR: The Christian Science Monitor, Kirkus Reviews

A president who governed a divided country has much to teach us in a twenty-first-century moment of polarization and political crisis. Hated and hailed, excoriated and revered, Abraham Lincoln was at the pinnacle of American power when implacable secessionists gave no quarter in a clash of visions bound up with money, race, identity, and faith. In him we can see the possibilities of the presidency as well as its limitations.

At once familiar and elusive, Lincoln tends to be seen as the greatest of American presidents—a remote icon—or as a politician driven more by calculation than by conviction. This illuminating new portrait gives us a very human Lincoln—an imperfect man whose moral antislavery commitment, essential to the story of justice in America, began as he grew up in an antislavery Baptist community; who insisted that slavery was a moral evil; and who sought, as he put it, to do right as God gave him to see the right.

This book tells the story of Lincoln from his birth on the Kentucky frontier in 1809 to his leadership during the Civil War to his tragic assassination in 1865: his rise, his self-education, his loves, his bouts of depression, his political failures, his deepening faith, and his persistent conviction that slavery must end. In a nation shaped by the courage of the enslaved of the era and by the brave witness of Black Americans, Lincoln’s story illustrates the ways and means of politics in a democracy, the roots and durability of racism, and the capacity of conscience to shape events.

An excerpt from And There Was Light

My Mind and Memory

“The short and simple annals of the poor.” That’s my life, and that’s all you or anyone else can make out of it. —Abraham Lincoln, writing in 1860

Equal rights for all men: Emancipation! —The Reverend Adam Shoemaker, an influential Baptist in the world of Lincoln’s youth

The roads were rough, the conversation unusual. In about his fortieth year, around 1850, Abraham Lincoln folded his long, angular frame into a one-horse buggy in Springfield, Illinois, for the nineteen-mile trip from the capital city to the courthouse in Petersburg, the seat of neighboring Menard County. He was riding with his law partner William Herndon, who recalled that the case they were to try “was one in which we were likely . . . ​to touch upon the subject of hereditary traits.”

Pondering the subject, Lincoln spoke of his mother, the late Nancy Hanks Lincoln. It was a striking, introspective, and candid moment. “He said . . . ​that she was the illegitimate daughter of Lucey Hanks and a well-bred Virginia farmer or planter,” Herndon recalled, “and he argued that from this last source”—the Virginia grandfather—“came his power of analysis, his logic, his mental activity, his ambition.” Lincoln had thought much on the subject. “His theory . . . ​had been that . . . ​illegitimate children are oftentimes sturdier and brighter than those born in lawful wedlock,” Herndon said, “and in his case, he believed that his better nature and finer qualities came from this broad-minded, unknown Virginian.”

The buggy bumped along. Lincoln was pensive. “The revelation—painful as it was—called up the recollection of his mother, and . . . ​he added ruefully, ‘God bless my mother; all that I am or ever hope to be I owe to her,’ and immediately lapsed into silence.” Lincoln’s quiet was more anguished than peaceful. “Burying himself in thought,” his companion recalled, “he drew round him a barrier which I feared to penetrate.”

Herndon was struck by the details of the exchange and the depth of feeling evident in Lincoln’s tone. Aside from the date and location of his birth—Sunday, February 12, 1809, in Hardin County, Kentucky—Lincoln “usually had but little to say of himself, the lives of his parents, or the history of the family,” Herndon recalled. “There was something about his origin he never cared to dwell upon.” To a correspondent who asked for information on his background once he became a national figure, Lincoln said, “There is not much of it, for the reason, I suppose, that there is not much of me.”

There was, in fact, much to Lincoln—and the best parts of him, he believed, came not from those forebears whom he knew, but from those he did not: the mysterious Virginia gentleman grandfather and long-dead Lincolns. The roots of his ambition to rise above his frontier birth may lie in his imaginative connection to ancestors, known and unknown, who had left a mark on the world. As a child and a youth, living in poverty, embarrassed by stories of promiscuity in his mother’s family, and facing a life of spirit-sapping labor and drudgery, Lincoln likely sought solace in the belief that he was a son of forebears who had transcended their time and place. If they could do so, the young Lincoln believed, then perhaps he could, too.

The family’s New World saga had begun with Samuel Lincoln, who had emigrated from Norwich, England, settling in Hingham, Massachusetts, about 1637. Puritan dissenters in England, the Lincolns of Hingham were prominent in their religious community in the Massachusetts Bay Colony, prospering in business and helping to build Hingham’s handsome Old Ship Church. Samuel and his wife, Martha Lincoln, had eleven children. One of their grandchildren, Mordecai, became a successful man in central Pennsylvania, marrying Hannah Saltar, a well-connected daughter of a New Jersey family that included lawmakers in the colonial assembly and an acting royal governor.

In 1716, Hannah Lincoln gave birth to John Lincoln, who continued the family’s migration south and west when he and his wife, Rebecca Flowers Lincoln, settled on a large farm on Linville Creek in the Shenandoah Valley in 1766. (He was to be known to history as “Virginia John” Lincoln.) Their son Abraham, the grandfather of the sixteenth president, had been born in Pennsylvania in 1744 and became an eager militiaman, earning the rank of captain. In 1774, he fought in Lord Dunmore’s War, a conflict between colonial forces under the command of John Murray, Lord Dunmore, the royal governor of Virginia, and a Shawnee-led Indian confederacy. Four years later, Lincoln was part of General Lachlan McIntosh’s operation to capture Britain’s Fort Detroit, a center of frontier resistance to the American Revolution; the campaign failed for lack of men and supplies.

Following familial pattern, Captain Abraham soon pressed on—in his case, leaving his father’s orbit in the Shenandoah for the Kentucky wilderness in 1780. In 1786, an Indian attacked and killed Captain Abraham—“not in battle,” as Lincoln would tell the story, “but by stealth, when he was laboring to open a farm in the forest.” According to tradition, the Indian warrior was then about to take one of Captain Abraham’s young sons captive. Another son, Mordecai, “jumped over the fence—ran to the fort” and shot the Indian at a distance of about 160 paces. He had aimed (“drew his ‘beed’ ”) at a silver half-moon medallion the Indian was wearing. The assailant was discovered, dead, the next day. “The story of his death by the Indians, and of Uncle Mordecai, then fourteen years old, killing one of the Indians,” Abraham Lincoln would recall of his grandfather, “is the legend more strongly than all others imprinted on my mind and memory.” The younger son who was saved that day, Thomas Lincoln, would become the father of Abraham Lincoln.

The slaying of Captain Abraham was the transformative event of Thomas Lincoln’s life. His father’s death diminished the family’s capacities, and, as the youngest son, Thomas found himself in a particular predicament. Mordecai Lincoln, having saved Thomas’s life, lost interest in the boy’s fortunes. “Owing to my father being left an orphan at the age of six years, in poverty, and in a new country, he became a wholly uneducated man,” Abraham Lincoln recalled. A kinswoman of Mary Lincoln’s recalled that “the reason why Thomas Lincoln grew up unlettered was that his brother Mordecai, having all the land in his possession . . . ​turned Thomas out of the house when the latter was 12 years old; so he went out among his relations . . . ​and there grew up.” Thomas, then, was not part of the more successful and established branch of his family. “These Lincolns,” a contemporary recalled, “were excellent men—plain, moderately educated, candid in their manners and intercourse, and looked upon as honorable as any men I have ever heard of.”

But not Thomas Lincoln. His son was blunt about his father’s plight: “Thomas . . . ​by the early death of his father and very narrow circumstances of his mother, even in childhood was a wandering laboring boy and grew up literally without education,” Abraham Lincoln recalled. “He never did more in the way of writing than to bunglingly write his own name.” Described as “an uneducated man, a plain unpretending plodding man [who] attended to his work, peaceable good and good natured,” Thomas was hired out for a year with an uncle, Isaac Lincoln, who had settled on the Watauga, a stream of the Holston River in what became upper East Tennessee. Forever struggling, Thomas became a carpenter and a farmer. “He was, we are told,” William Herndon wrote, “five feet ten inches high, weighed one hundred and ninety-five pounds, had a well-rounded face, dark hazel eyes, coarse black hair, and was slightly stoop-shouldered.” By 1806, Thomas had met and, in a ceremony conducted by the Methodist minister Jesse Head, married Nancy Hanks, a daughter of Lucey Hanks and, as Abraham Lincoln believed, the unknown Virginia gentleman.

The Hanks family was a source of embarrassment to Abraham Lincoln. He described his grandmother Lucey, whom a grand jury once charged with fornication, as “a halfway prostitute.” In kinder moments, he cast her as a victim. “My mother’s mother was poor and credulous, &c.,” he said, “and she was shamefully taken advantage of by the man.” Lincoln lived, too, with rumors that he was not the son of Thomas Lincoln. “That Nancy Hanks was of low character but that Thomas Lincoln married her,” recalled John B. Helm, a Kentucky neighbor of the Lincolns’. One story in local circles was that Nancy Hanks had been impregnated by a man named Abraham Enlow (also sometimes spelled “Enloe”) before her marriage to Thomas Lincoln and that Abraham Lincoln was Enlow’s natural son. “She was a woman that did not bear a very virtuous name, and it was hard to tell who was the father of Abe,” a Kentucky contemporary of Lincoln’s recalled. The story circulated for decades—and Enlow insisted it was true. However, as Herndon was told, “Abe Enlow was as low a fellow as you could find.”

Abraham Lincoln and the American Struggle 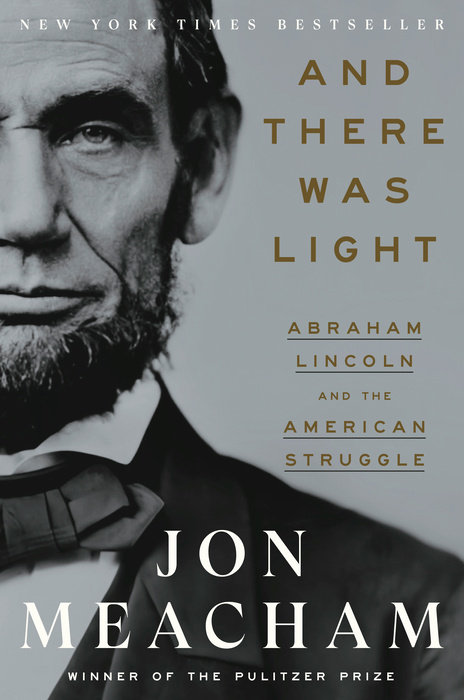