“Destined to become one of the classics of the genre” (Newsweek), the riveting, unforgettable story of a girl whose indomitable spirit is tested by homelessness, poverty, and racism in an unequal America—from Pulitzer Prize-winning journalist Andrea Elliott of The New York Times

Invisible Child follows eight dramatic years in the life of a girl whose imagination is as soaring as the skyscrapers near her Brooklyn shelter. Dasani was named after the bottled water that signaled Brooklyn’s gentrification and the shared aspirations of a divided city. In this sweeping narrative, Elliott weaves the story of Dasani’s childhood with the history of her family, tracing the passage of their ancestors from slavery to the Great Migration north. As Dasani comes of age, the homeless crisis in New York City has exploded amid the deepening chasm between rich and poor.

Dasani must guide her siblings through a city riddled by hunger, violence, drug addiction, homelessness, and the monitoring of child protection services. Out on the street, Dasani becomes a fierce fighter to protect the ones she loves. When she finally escapes city life to enroll in a boarding school, she faces an impossible question: What if leaving poverty means abandoning your family, and yourself?

By turns heartbreaking and inspiring, Invisible Child tells an astonishing story about the power of resilience, the importance of family, and the cost of inequality. Based on nearly a decade of reporting, Invisible Child illuminates some of the most critical issues in contemporary America through the life of one remarkable girl.

An excerpt from Invisible Child

She wakes to the sound of breathing.

The smaller children lie tangled under coats and wool blankets, their chests rising and falling in the dark. They have yet to stir. Their sister is always first.

She looks around the room, seeing only silhouettes—the faint trace of a chin or brow, lit from the street below. Mice scurry across the floor. Roaches crawl to the ceiling. A little sink drips and drips, sprouting mold from a rusted pipe.

A few feet away is the yellow mop bucket they use as a toilet, and the mattress where the mother and father sleep, clutched. Radiating out from them in all directions are the eight children they share: two boys and five girls whose beds zigzag around the baby, her crib warmed by a hair dryer perched on a milk crate.

They have learned to sleep through anything. They snore with the pull of asthma near a gash in the wall spewing sawdust. They cough or sometimes mutter in the throes of a dream. Only their sister Dasani is awake.

She is tiny for an eleven-year-old and quick to startle. She has a delicate oval face and luminous eyes that watch everything, owl-like. Her expression veers from mischief to wonder. People often remark on her beauty—the high cheekbones and chestnut skin—but their comments never seem to register. What she knows is that she has been blessed with perfect teeth. When braces are the stuff of fantasy, straight teeth are a lottery win.

Slipping out from her covers, Dasani goes to the window. On mornings like this, she can see all the way past Brooklyn, over the rooftops and the projects and the shimmering East River. Her eyes can travel into Manhattan, to the top of the Empire State Building, the first New York skyscraper to reach a hundred floors. This is the type of fact that she recites in a singsong, look-what-I-know way. She fixes her gaze on that distant temple, its tip pointed celestially, its facade lit with promise.

Even Dasani’s name speaks of a certain reach. The bottled water had come to Brooklyn’s bodegas just before she was born, catching the fancy of her mother, who could not afford such indulgences. Who paid for water in a bottle? Just the sound of it—Dasani—conjured another life. It signaled the presence of a new people, at the turn of a new century, whose discovery of Brooklyn had just begun.

By the time Dasani came into the world, on May 26, 2001, the old Brooklyn was vanishing. Entire neighborhoods would be remade, their families displaced, their businesses shuttered, their histories erased by a gentrification so vast and meteoric that no brand of bottled water could have signaled it. And as prosperity rose for one group of people, poverty deepened for another, leaving Dasani to grow up—true to her name—in a novel kind of place.

Her skyline is filled with luxury towers, the beacons of a new Gilded Age. The city’s wealth has flowed to its outer edges, bringing pour-over coffee and artisanal doughnuts to places once considered gritty. Among them is Dasani’s birthplace, Fort Greene, Brooklyn, where renovated townhouses come with landscaped gardens and heated marble floors. Just steps away are two housing projects and, tucked among them, a city-run homeless shelter where the heat is off and the food is spoiled.

It is on the fourth floor of that shelter, at a window facing north, that Dasani now sits looking out. Nearly a quarter of her childhood has unfolded at the Auburn Family Residence, where Dasani’s family—a total of ten people—live in one room. Beyond the shelter’s walls, in the fall of 2012, Dasani belongs to an invisible tribe of more than twenty-two thousand homeless children—the highest number ever recorded, in the most unequal metropolis in America. Almost half of New York’s 8.3 million residents are living near or below the poverty line.

Dasani can get lost looking out her window, until the sounds of Auburn interrupt. Different noises mean different things. She sorts them like laundry. The light noises bring no harm—the colicky cries of an infant down the hall, the hungry barks of the Puerto Rican lady’s Chihuahuas, the addicts who wander the projects, hitting some crazy high. They can screech like alley cats, but no one is listening.

The sound that matters has a different pitch. It comes loud and fast, with a staccato rhythm. The popping of gunshots. The pounding of fists. The rap of a security guard’s knuckles on the door. Whenever this happens, Dasani starts to count.

She counts her siblings in pairs, just like her mother said. The thumb-suckers first: six-year-old Hada and seven-year-old Maya, who share a small mattress. The ten-year-olds next: Avianna, who snores the loudest, and Nana, who is going blind. The brothers last: five-year-old Papa and eleven-year-old Khaliq, who have converted their metal bunk into a boys-only fort.

They are all here, six slumbering children breathing the same stale air. If danger comes, Dasani knows what to do. She will kick them awake. She will tell them to shut up. They will drop to the floor in silence.

Except for Baby Lee-Lee, who wails like a siren. Dasani keeps forgetting to count the newest child. She had been born in April, shattering the air with her cries. Until then, Dasani considered herself a baby expert. She could change diapers, pat for burps, check for fevers. She could even tell the difference between a cry for hunger and a cry for sleep.

Lee-Lee’s cry was something else. Only a mother could answer it, and for a while their mother was gone.

Nearly a year ago, the city’s child protection agency had separated thirty-four-year-old Chanel Sykes from her children after she got addicted to opioids. Her husband also had a drug history. But under court supervision, he had remained with the children, staying clean while his wife entered a drug treatment program.

Now Chanel is back, her custodial rights restored. Still, the baby howls. This is usually the sound that breaks Dasani’s trance, causing her to leave the window and fetch Lee-Lee’s bottle.

Dasani feels her way across the room that she calls “the house”—a 520-square-foot space containing her family and all their possessions. Toothbrushes, love letters, a dictionary, bicycles, an Xbox, birth certificates, Skippy peanut butter, underwear. Hidden in a box is Dasani’s pet turtle, kept alive with bits of baloney and the occasional Dorito. Taped to the wall is the children’s proudest art: a bright sun etched in marker, a field of flowers, a winding path. Every inch of the room is claimed.

“We each got our own spot,” Dasani says.

Each spot is routinely swept and sprayed with bleach and laid with mousetraps. The mice used to terrorize Dasani, leaving pellets and bite marks. Nowadays, Room 449 is a battleground. On one side are the children, on the other the rodents—their carcasses numbering up to a dozen per week. To kill a mouse is to score a triumph.

“We burn them!” Dasani says with none of the tenderness reserved for her turtle. “We take the sticks and smash they eyes out! We break their necks. We suffocate them with the salt!”

In the dim chaos of Room 449, she struggles to find Lee-Lee’s formula, which is donated by the shelter but often expired. Dasani squints to check the date. Now the bottle must be heated. The only way to do this is to leave the room, which brings its own dangers. Over the next year, 9-1-1 dispatchers will take some 350 calls from Auburn, logging twenty-four reports of assault, four reports of child abuse, and one report of rape.

Dasani opens a heavy metal door, stepping into the dark corridor. She is sure the place is haunted. Auburn used to be a hospital, back when nurses tended to the dying in open wards. Dasani’s room was “where they put the crazies,” she says, citing as proof the broken intercom on the wall. Right outside is a communal bathroom with a large industrial tub. A changing table for babies hangs off its hinge. Mothers shower quickly, posting their children as lookouts for the building’s predators.

Dasani slips down three flights of stairs, passing a fire escape where drugs and weapons are smuggled in. She trots into the cafeteria, where more than a hundred families will soon stand in line to heat their prepackaged breakfast. With only two microwaves, this can take an hour. Tempers explode. Knife fights break out.

Luckily, in this predawn hour, the cafeteria is still empty. Dasani places the bottle in the microwave and presses a button. Baby Lee-Lee has yet to learn about hunger, or any of its attendant problems. If she cries, others answer. Her body is still small enough to warm with a hair dryer. She is the least of Dasani’s worries.

Andrea Elliott is an investigative reporter for The New York Times and a former staff writer at The Miami Herald. Her reporting has been awarded a Pulitzer Prize, a George Polk Award, a Scripps Howard Award, and prizes from the Overseas Press Club and the American Society of News Editors. She has served as an Emerson Collective fellow at New America, a visiting journalist at the Russell Sage Foundation, and a visiting scholar at the Columbia Population Research Center, and is the recipient of a Whiting Foundation grant. In 2015, she received Columbia University’s Medal for Excellence, given to one alumnus or alumna under the age of forty-five. She lives in New York City. This is her first book. 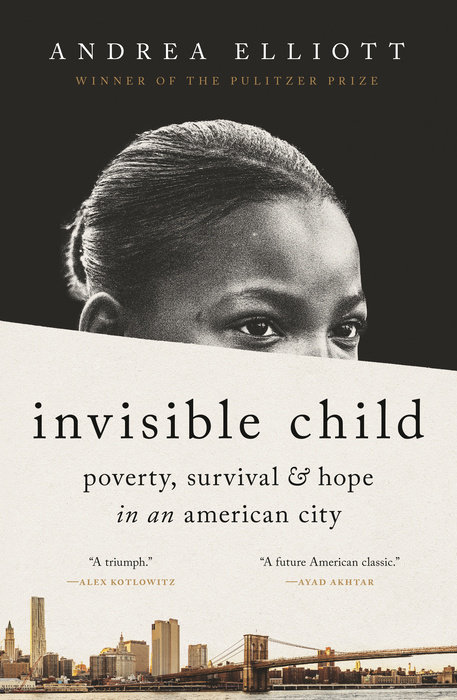