The American Soldier of Fortune Who Became a God in China

“So marvelously improbable, so rich in exotic detail, that if often reads more like a historical thriller than the serious work of history that it is.”—Los Angeles Times

With the same flair for history and narrative that distinguished his bestseller, The Alienist, Caleb Carr tells the incredible story of Frederick Townsend Ward, the American mercenary who fought for the emperor of China in the Taiping rebellion, history's bloodiest civil war. The Devil Soldier is a thrilling, masterfully researched biography of the kind of adventurer the world no longer sees.

Praise for The Devil Soldier

“If ever a book of history were made for the movies, Caleb Carr's The Devil Soldier is it.”—Chicago Tribune

An excerpt from The Devil Soldier

“A NEW RACE OF WARRIORS”

On May 2, 1860, the city of Nanking, China—nestled between a wide bend in the Yangtze River and a commanding promontory called Purple Mountain—was alive with celebration. Its citizens, who had been in open rebellion against the Manchu emperor in Peking for the better part of a decade, had endured a bitter siege during the winter, one that had finally been broken by a daring series of feints and raids by the rebel armies. After long months of privation, the way now seemed clear to bring badly needed food, arms, and treasure into the city. And so the people of Nanking lifted their voices in thanks to the god whose worship had made them outlaws in their own country: Shang-ti, the “Supreme Lord,” whose eldest son was called Jesus and whose second son, the rebels believed, was their own leader, their T’ien Wang (“Heavenly King”). The scattering of the Manchu emperor’s soldiers—or, as the followers of the T’ien Wang called them, the “demon imps”—before the walls of Nanking was taken as yet another sign that the T’ien Wang had truly been dispatched by Shang-ti to bring down the Manchu dynasty and establish the T’ai-ping t’ien-kuo (“Heavenly Kingdom of Great Peace”) in China.

In the midst of the May 2 rejoicing, the T’ien Wang dispatched a message to his senior advisers and assistants, summoning them to an immediate council of war to determine the future of the great Taiping movement. The message was brought out of the T’ien Wang’s sumptuous yellow palace by one of his female attendants: Taiping men were generally forbidden from entering the inner sanctum of their leader, who lived alone with a retinue of concubines and cited Solomon and his hundreds of wives as a hallowed example. Making its way from splendid residence to splendid residence, the summons finally reached the colonnades and gilded domes of the palace of the Chung Wang, or “Faithful King.” (The T’ien Wang’s lieutenants, though subordinate to him, all incorporated the word wang, or “king,” into their titles.) The Chung Wang had been more responsible than any man for lifting the recent siege of Nanking. Indeed, his considerable military talents had ensured the survival of the rebellion for a number of years. And he had been honored in return: Once a poor mountain farmer and laborer called Li Hsiu-ch’eng, he now controlled troops numbering in the hundreds of thousands, as well as a vast fortune in silver. But in the spring of 1860 the Chung Wang was a deeply troubled man, vexed by doubts about the Taiping cause that no amount of honor or reward could ease.

Though only thirty-seven at the time he was summoned to the May 2 council of war, the Chung Wang had about him, said an Englishman who knew him in Nanking, “a trace of arduous mental and physical exertion” that “gave him a rather worn and older appearance. His figure light, active and wiry, was particularly well formed;… his bearing erect and dignified, his walk rapid but stately. His features were very strongly marked, expressive, and good, though not handsome according to the Chinese idea, being slightly of a more European cast than they admire.” An anxious, restless man, the Chung Wang seemed to find spiritual ease only on the battlefield: “His large eyes flashed incessantly, while the lids were always twitching. From his energetic features, and the ceaseless nervous movement of his body … no one would imagine that he could possess such perfect coolness in battle; yet I have often since observed him in action, when, in spite of his apparent excitability, his self-possession was imperturbable, and his voice … unchanged, save being more rapid and decisive in moments of greatest danger.”

Like many of the hundreds of thousands of Taiping adherents, the Chung Wang had joined the rebellion less out of genuine devotion to the strange amalgam of Christianity and Chinese mysticism that was the T’ien Wang’s faith than out of weariness with Manchu oppression. In the two centuries since Tartar tribesmen had swept down out of Manchuria and into China, deposing the Ming and establishing their own Manchu dynasty, their rule had degenerated into a system of corruption and repression that left China’s poorest provinces in a state of near-constant rebellion. Young peasants joined these uprisings almost as a matter of course: “When I was young at home as an ordinary person,” the Chung Wang later recalled of the Taiping movement, “I understood nothing, but joined up in the excitement.” In the ensuing decade of the 1850s, as the Taipings made their way from province to province and became the greatest threat to Manchu rule in the history of the dynasty, the Chung Wang battled his way up and out of the rebel ranks. But he also witnessed internecine conflicts among the Taiping leaders, brutal suppressive measures undertaken by the Manchus, the T’ien Wang’s withdrawal into a private world of debauchery, and the slaughter of millions of his fellow peasants by both rebel and imperial troops. By 1860 the Chung Wang was weary and losing heart: “There were many people in the [T’ien Wang’s] Heavenly Dynasty who did harm to the people; what could I alone do, for all my compassion? Power was not in my hands, so what could I do?… Once you are riding a tiger’s back it is difficult to dismount.”

The lifting of the siege of Nanking had not given the Chung Wang any commensurate sense of relief. In fact, his worries, especially those concerning his sovereign, had only multiplied. After the victory, said the Chung Wang, “no edict was pronounced praising the generals; the field commanders were not received in audience, nor were the court officials. The Sovereign was not interested in the affairs of government, but merely instructed his ministers in the knowledge of Heaven, as if all was tranquil.” Militarily, the Chung Wang knew that the rebel position at Nanking was still far from secure. The “demon imps” would be back, and, unless the Taipings could break out of the Nanking region and secure open routes to adequate sources of supply, the imperialists would eventually crush the movement, if only through attrition. The rebels’ next move would be crucial, and the May 2 council of war thus took on immense importance.

Knowing this, the Taiping chiefs arrived at the meeting wearing their most impressive regalia and armed with battle plans that each was convinced would prove the salvation of the Heavenly Kingdom. The T’ien Wang made it a point on such occasions to wear robes of imperial yellow—previously reserved for the occupant of the Dragon Throne in Peking—as well as a tall headdress reminiscent of the Ming dynasty. The Chung Wang wore a coronet of gold, in the shape of a tiger flanked by two eagles and decorated with precious stones and pearls. Rebels these men may have been—but the plundering of more than half of China had allowed their movement to take on singularly imperial trappings.

Plans for a spring campaign were proposed and discarded. The Shih Wang, or “Attendant King,” proposed a move southeast, toward the farms of Chekiang and Fukien provinces and the rich ports of Ningpo and Foochow. But such a long march to the coast, the other wangs argued, would leave the upper stretches of the Yangtze River badly exposed and the western approach to Nanking open. The Ying Wang, or “Heroic King,” wished to march in this direction and reinforce the city of Anking, rightly considered the gateway to the Nanking region.

It was the T’ien Wang’s cousin and prime minister—the Kan Wang, or “Shield King”—who proposed the plan that most appealed to his sovereign. It incorporated the objects of the Shih Wang’s and the Ying Wang’s plans but achieved them more efficiently than either. The Taiping forces, said the prime minister, should strike out from Nanking in two great pincers, one to the north side of the Yangtze and one to the south. In a pair of wide sweeps that would shatter the Manchu forces in central China, the two armies would converge not on Anking but much farther to the west, at Hankow. The “demon imps,” their attention fixed on Nanking and Anking, would not be ready for such a move. The Shih Wang’s suggestion that the rebellion be resupplied through a move to the seacoast was also accepted. Ningpo and Foochow were too distant, however, to be incorporated into the Kan Wang’s scheme. Instead, the port of Shanghai in the rich province of Kiangsu was selected as a target. Attacking here before moving west, the Taiping southern pincer would secure needed supplies—including twenty armed river steamships for use on the Yangtze—and hopefully establish friendly relations with the Westerners who traded at the port and who worshiped, the Taipings believed, their own Shang-ti.

The Chung Wang had misgivings about the prime minister’s plan but thought it the best of those put forward and elected to support it. That was enough for the T’ien Wang, who approved the strategy as well as the assignment of the Chung Wang to lead the vital southern army, which was to conquer the province of Kiangsu, move on to Shanghai, then wheel rapidly west and approach Hankow. Yet the Chung Wang’s heart was still not at rest: He was given only one month to take the provincial capital of Soochow in Kiangsu, and the T’ien Wang’s language in ordering him to do so was, in the young commander’s opinion, “severe.” But, as the Chung Wang observed, “things being what they were, and since I was employed by him, I had to obey.”

With the plan settled, the Taiping armies were assembled and addressed by their commanders. Uniforms of red, yellow, white, and orange silk, emblazoned with the names of commanders and individual units, as well as hundreds of brilliantly colored banners and thousands of long spears, all moved in splendid agitation as the Taiping soldiers enthusiastically answered the exhortations of their chiefs. Having abandoned the shaved forehead and long pigtail that were signs of Chinese submission to the Manchus, the Taiping men wore their hair loose and uncut (earning them the epithet chang-maos, or “long-haired rebels”), and sometimes wound it in red and yellow turbans. And there were women in the ranks, as well: The Taipings had rejected the crippling custom of binding feet, and the daughters of the cause were able to move about freely. Taken as a whole, the Taiping hordes were an impressive and, in the Chinese experience, unprecedented sight.

The American Soldier of Fortune Who Became a God in China 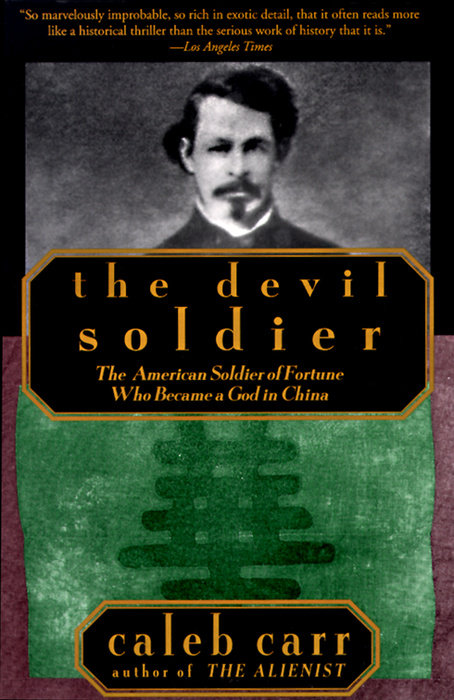