Food, Free Will, and How the Food Giants Exploit Our Addictions

From the #1 New York Times bestselling author of Salt Sugar Fat comes a powerful exposé of how the processed food industry exploits our evolutionary instincts, the emotions we associate with food, and legal loopholes in their pursuit of profit over public health.

“The processed food industry has managed to avoid being lumped in with Big Tobacco—which is why Michael Moss’s new book is so important.”—Charles Duhigg, author of The Power of Habit

Everyone knows how hard it can be to maintain a healthy diet. But what if some of the decisions we make about what to eat are beyond our control? Is it possible that food is addictive, like drugs or alcohol? And to what extent does the food industry know, or care, about these vulnerabilities? In Hooked, Pulitzer Prize–winning investigative reporter Michael Moss sets out to answer these questions—and to find the true peril in our food.

Moss uses the latest research on addiction to uncover what the scientific and medical communities—as well as food manufacturers—already know: that food, in some cases, is even more addictive than alcohol, cigarettes, and drugs. Our bodies are hardwired for sweets, so food giants have developed fifty-six types of sugar to add to their products, creating in us the expectation that everything should be cloying; we’ve evolved to prefer fast, convenient meals, hence our modern-day preference for ready-to-eat foods. Moss goes on to show how the processed food industry—including major companies like Nestlé, Mars, and Kellogg’s—has tried not only to evade this troubling discovery about the addictiveness of food but to actually exploit it. For instance, in response to recent dieting trends, food manufacturers have simply turned junk food into junk diets, filling grocery stores with “diet” foods that are hardly distinguishable from the products that got us into trouble in the first place. As obesity rates continue to climb, manufacturers are now claiming to add ingredients that can effortlessly cure our compulsive eating habits.

A gripping account of the legal battles, insidious marketing campaigns, and cutting-edge food science that have brought us to our current public health crisis, Hooked lays out all that the food industry is doing to exploit and deepen our addictions, and shows us why what we eat has never mattered more.

An excerpt from Hooked

This was 1990. Cigarettes were the main order of business at the company’s headquarters on Park Avenue in Manhattan, just south of Grand Central Station. The conference room tables were adorned with ashtrays and bowls filled with packs of cigarettes. The ceilings had fans to disperse the smoke. The walls sported images of the Marlboro Man and Virginia Slims and the company’s other iconic cigarette brands.

When Parrish traveled to Richmond, Virginia, where a Philip Morris factory three football fields long turned out 580 million cigarettes a day, it was all smoking all the time, from the receptionist who would take a slow drag before she greeted you, to the free packs that visitors twenty-­one and older could take home along with a bumper sticker that read “I support smokers’ rights.”

Parrish was the general counsel of Philip Morris, where it was his job to defend the company in public and in the courts at a time when cigarettes were under attack, and that gave him lots of stress to deal with. Cigarettes soothed his nerves, though there were other aspects of smoking beyond the nicotine that he found compelling. “There are times when I like fiddling with the cigarette before I even light it,” he explained back then. “There are times when I like to see the smoke go up. I like the sensation at the back of my throat.”

But the most notable thing about Parrish’s smoking was how often he didn’t. He didn’t smoke at home. He didn’t smoke on weekends. Now and then, he would light up in a bar, but outside of the company’s offices, he felt no compulsion to smoke. Which seemed, at the time, to contradict the idea that cigarettes were addictive.

He was not alone in this. Surveys found that one in five smokers had five or fewer cigarettes a day; some even skipped days altogether. This phenomenon helped form the bulwark of Philip Morris’s defense against efforts to hold the company accountable for smoking-­related deaths. As dangerous as cigarettes might be to one’s health, how could they be called addictive if millions of people used them so casually?

At least, that’s what the company argued back then. Philip Morris had lawyers on staff who compiled thick dossiers on addiction to use as talking points in court. Some of the studies they collected presented smoking as a matter of choice, in which weak self-­control prevented people from being able to quit.

Philip Morris also had staff scientists on hand to counter research that compared smoking to abusing drugs. When one such paper emerged from the National Institute on Drug Abuse, quoting addicts who said it was easier for them to quit heroin than cigarettes, a Philip Morris researcher wrote a rebuttal that called this a false equivalency. “What does this statement mean?” the scientist scoffed. “Do heroin abusers find it difficult to give up soft-­drinks, coffee, or sex?”

Philip Morris also had a chief executive who, in 1994, was willing to climb Capitol Hill and, in front of cameras and under oath, affirm the company’s position. “I believe nicotine is not addictive,” William Campbell said in that highly publicized appearance. He was joined at the table by six other tobacco company chiefs, all of whom readily agreed on this point.

Indeed, smoking was no more addictive than Twinkies, one of the CEOs said in that same congressional inquiry, and Philip Morris expanded on this comparison in various forums. When the National Institute on Drug Abuse paper had sought to define addiction as the repeated consumption of a toxic substance with undesirable consequence, the company scientist wrote in a memo, “Many people use sugar, saccharin, coffee, soft-­drinks, and candy, repeatedly through the day, and all of these can be ‘toxic’ under certain conditions. Does that mean that ingestion of all these chemical compounds produces ‘addiction’?”

The scientist was getting at one of the more challenging aspects of addiction. People, even experts, may think they know an addiction when they see one. But putting a definition to paper can easily cast such a big net that even water could qualify as an addictive substance, given that the body craves it, and under some circumstances—drinking too much while running a marathon, for example—­can fatally disrupt the body’s chemistry. On the other hand, the definition could be so restrictive that even some illicit drugs wouldn’t fit the bill. The users of cocaine, for instance, don’t develop a physical dependence or suffer the pain of withdrawal, which at one time were considered to be hallmarks of addiction.

In 1994, when the Food and Drug Administration’s drug abuse advisory committee considered adding cigarettes to its list of addictive substances, Philip Morris mustered eight experts in its defense, including a prominent psychiatrist. “In my judgment, the better characterization of cigarettes is that they are ‘habit-­forming,’ not addictive,” the psychiatrist attested. “Cigarettes lie somewhere between high cholesterol foods such as eggs, on the one hand, and heroin, on the other, and they are much, much closer to steak and eggs.”

This pairing of cigarettes with food was a bit awkward for Philip Morris. The company was best known for tobacco, but a slight majority of its revenue was derived from groceries. Through its acquisition of General Foods and Kraft in the 1980s, Philip Morris had become the single largest manufacturer of processed food in the United States. Its dozens of brands included household staples such as Kool-­Aid, Capri Sun, Cocoa Pebbles, and Lunchables.

The tobacco and food divisions shared a difficult relationship. Some at Kraft had been appalled when Philip Morris took over their company, and they sought to preserve their products’ wholesome image by distancing them from the cigarettes. But the consequences of a diet heavy in processed food was already starting to get as much bad press as nicotine. Some at Philip Morris, including Parrish, had an even darker view of certain foods than they did of cigarettes. Parrish could put his smokes away at the end of the workday, but not so the company’s Oreos. “I’m dangerous around a bag of chips or Doritos or Oreos,” he told me. “I’d avoid even opening a bag of Oreos because instead of eating one or two, I would eat half the bag.”

Philip Morris believed in taking the public’s pulse on all matters that might provide legal or marketing intelligence for its business, and the surveys it ran on addiction showed that Parrish wasn’t alone. Many people seemed to share similar problems with food. In 1988, the polling company Louis Harris asked people to name the substances or activities that they felt were addictive, and to rate them on a 1 to 10 scale, 10 being the maximum loss of control. Smoking was given an 8.5, nearly on par with heroin. But overeating, at 7.3, was not far behind, scoring higher than beer, tranquilizers, and sleeping pills. This statistic was used to buttress the company’s argument that cigarettes might not be exactly innocent, but they were a vice on the order of potato chips and, as such, were manageable.

Despite Philip Morris’s best efforts to paint cigarettes as no more addictive than junk food, the ground began to shift under its tobacco business. In the late 1990s, the company was still winning most of the lawsuits brought by smokers who developed emphysema and other health troubles, but the cases were getting harder to defend. Even when Philip Morris prevailed, it was losing in the court of public opinion. By 2000, not quite one in two people thought the government should step in to regulate cigarettes with restrictions on manufacturing and marketing aimed at curbing their use. Overseas, where the company had big expansion plans, the World Health Organization was moving to help other countries draw up their own controls.

Philip Morris knew that if it didn’t come up with a way to save its public image, it could forget about winning the burgeoning numbers of new smokers in Europe, Asia, and Latin America. “Our problems are so large and the negativism about Philip Morris runs so deep that we believe we must reach much further than other companies would have to if we are to achieve our objectives,” Steve Parrish told the attendees of a conference on corporate image that year.

Parrish had such a plan, though it was so brazen that the company’s leaders twice rejected it as pure heresy. In the end, however, he got them to see the brilliance of the move. Philip Morris had already made one concession—going on the record with statements that cigarettes could be dangerous to health, though it still couched this as a matter of personal choice. With the legal threats piling up, however, and regulators winding up for a knockout punch, Parrish convinced the company to act. It played dead, like Muhammad Ali in his 1974 bout with George Foreman where, in the move dubbed the “rope-­a-­dope,” Ali slouched against the ropes in what looked like a vulnerable position and let Foreman tire himself out with harmless jabs before coming back at him full force. The company would exhaust its attackers by embracing their most powerful blow, the very thing the company had fought hardest against. It would concede addiction.

MICHAEL MOSS is the author of the #1 New York Times bestseller Salt Sugar Fat: How the Food Giants Hooked Us, a Pulitzer Prize-winning investigative reporter formerly with the New York Times, a keynote speaker, and occasional guest on shows like CBS This Morning, The Dr. Oz Show, CNN's The Lead, All Things Considered, and The Daily Show.

Food, Free Will, and How the Food Giants Exploit Our Addictions 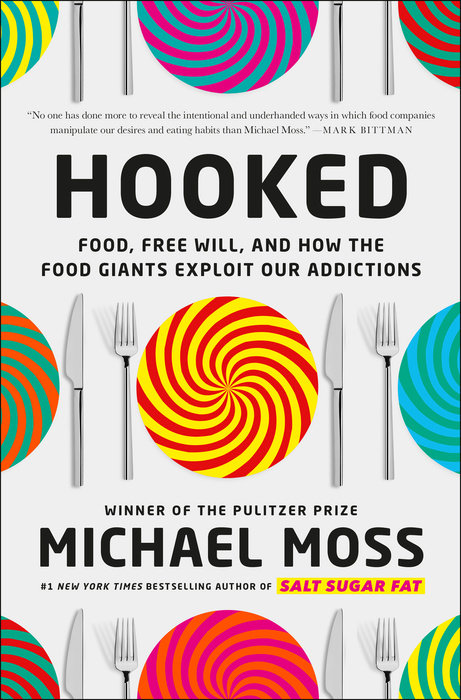