In the tradition of New Adult superstar Jessica Sorensen, Ellie Cahill’s debut novel is a charming friends-with-benefits story . . . with a twist!

What if after every bad breakup, there was someone to help “cleanse your palate”—someone who wouldn’t judge you, who was great in bed, someone you were sure not to fall in love with? “Sorbet sex” could solve everything—as long as it never got too sweet.

Joss and Matt have been friends since freshman year of college, meeting one night after Joss is dumped by her boyfriend. After a few drinks, Matt humors her with a proposition: that he’ll become her go-to guy whenever she needs to heal a broken heart. In return, she’ll do the same for him. The #1 Rule: They’ll never fall in love with each other. People scoff at the arrangement. But six years later, Joss and Matt are still the best of friends . . . with benefits.

Through a string of boyfriends and girlfriends—some almost perfect, some downright wrong—Joss and Matt are always there for each other when the going gets tough. No strings. No attachments. Piece of cake. No problem. After all, since they wrote the rules, surely they can play by them. Or can they?

“Hands down, one of my favorite New Adult reads . . . Ellie Cahill is definitely one to watch!”—New York Times bestselling author Cora Carmack

“This is one of those books that make you forget everything around you. Prepare to be consumed by this story.”—Sophie Jordan, New York Times bestselling author of Wild

“Fun, sexy, and full of amazing chemistry, When Joss Met Matt is an entertaining escape that will leave you smiling with every turn of the page.”—Cassie Mae, author of The Real Thing

An excerpt from When Joss Met Matt

It took me weeks to work up the courage, but on a sunny Friday in May, I was finally ready to tell Matt that we couldn’t go on like this anymore. But, of course, I was stuck at work. I spent the afternoon feeling like I was standing with my toes curled around the end of the high dive. The anticipation was killing me. When I finished with the last patient of the day—­a rabbit named Bugs—­I rushed Nellie through the narcotic count and sterilizing the instruments. I wanted to get on the phone with Matt. Like yesterday.

“Come on, come on, come on . . .” I cupped my hands to the window and peered inside. There, on the floor of the passenger side, my phone was waiting. “Oh, thank you!” I didn’t know who I was talking to. The words just fell out of my mouth and a tide of relief made my knees weak.

I scooped up the phone and, clasping it to my chest, took a deep breath. I could do this.

“Just call him. All you have to do is call him. Figure out the rest later.”

But when I looked down at the screen there was already a text message from Matt himself waiting for me.

Joss, I need you tonight. Call me.

My heart shot into my throat. He only said he needed me for one reason, and one reason alone. It was only supposed to be after a breakup. He’d been seeing someone? The thought was like having a bucket of ice water dumped over my head.

All the time I spent figuring out how to tell him how I felt, and he was busy going out with someone? He’d never said a word.

“Oh God, I’m an idiot.” I let my head come down on the steering wheel, a little harder than I expected. “Ow.”

Maybe I’d misunderstood. Maybe he’d said it by accident. Maybe his autocorrect had done one of those weird things . . . maybe I was grasping at straws.

A knock on the window made me jump. It was my best work friend, Nellie, and she was laughing hard enough to make her ponytail bob up and down wildly. I turned the engine over and let the window down.

“That was hilarious,” she said.

“You scared the crap out of me.”

“Yeah, yeah. Call him.” The laughter was gone from her voice now.

“Ah-­ah!” She held up a cautionary finger. “I don’t care. You were ready five minutes ago and I’m not going to let you weasel your way out of this.”

“Shhh!” she snapped. “Call. Now.” And when I didn’t move she made as if to reach through the window to do it for me.

I yanked my phone out of reach, smacking the plastic Mardi Gras beads dangling from the rearview mirror with the back of my hand. They chittered gaily together. “I will.”

She rested her elbows on the window ledge and gestured with one hand for me to go ahead.

I glared at her, but she just made that Nellie face that said, “Go ahead and try to change my mind. See how that goes for you.”

“I hate you,” I told her, but pressed the speed dial button for Matt. I turned the display so she could see his name and number.

“Thank you!” Her voice was perky now. “Now you better tell him, or I’ll have to hit you with my shoe on Monday, mmmkay? ’Kay.” And with that, she was gone, fingers waggling.

“You’re a terrible frie—­” I started to call after her, but Matt cut me off.

Instant butterflies. “I got your message.”

He got right to the point. “Are you busy?”

“Do you want to have dinner?”

“Dinner? You know, where you eat?”

I couldn’t help smiling, even while my stomach churned. “Yeah, I know dinner.”

Maybe I’d misinterpreted his text. Maybe it really had been one of those autocorrect disasters. “Um, sure. I guess.”

We said our goodbyes and disconnected. I stared at the blank phone for a moment. He would never suggest dinner if all he wanted was Sorbet. So maybe tonight was my night after all. The thought made my stomach go into a full-­on Olympic gymnastics floor routine, my heart pounding and cold sweat making my skin prickle. I was going to need some serious courage, and I couldn’t think of a store that sold it on my way home from work.

Seven years had led up to this. It was something of a miracle we were still on speaking terms after all we’d been through, and I was about to put it all on the line.

To think it had all started over my inability to drink beer.

Ellie Cahill is a freelance writer and also writes books for young adults under the name Liz Czukas. She lives outside Milwaukee, Wisconsin, with her husband, son, and the world’s loudest cat. 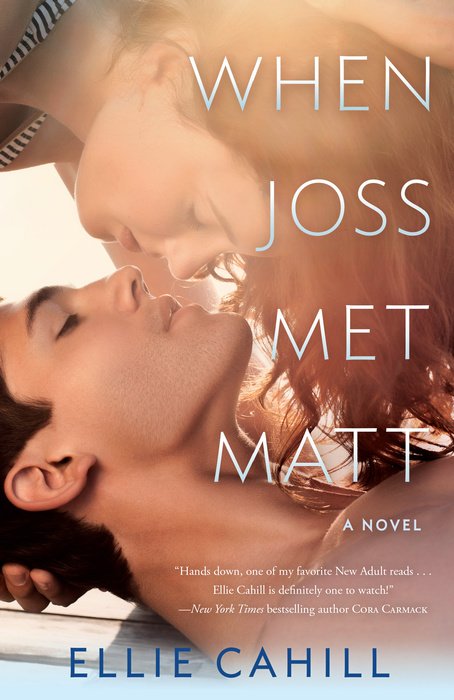