NEW YORK TIMES BESTSELLER • The long-awaited new novel from the bestselling, prize-winning author of Cloud Atlas and The Bone Clocks.

“A sheer pleasure to read . . . Mitchell’s prose is suppler and richer than ever . . . Making your way through this novel feels like riding a high-end convertible down Hollywood Boulevard.”—Slate

Utopia Avenue is the strangest British band you’ve never heard of. Emerging from London’s psychedelic scene in 1967, and fronted by folk singer Elf Holloway, blues bassist Dean Moss and guitar virtuoso Jasper de Zoet, Utopia Avenue embarked on a meteoric journey from the seedy clubs of Soho, a TV debut on Top of the Pops, the cusp of chart success, glory in Amsterdam, prison in Rome, and a fateful American sojourn in the Chelsea Hotel, Laurel Canyon, and San Francisco during the autumn of ’68.

David Mitchell’s kaleidoscopic novel tells the unexpurgated story of Utopia Avenue’s turbulent life and times; of fame’s Faustian pact and stardom’s wobbly ladder; of the families we choose and the ones we don’t; of voices in the head, and the truths and lies they whisper; of music, madness, and idealism. Can we really change the world, or does the world change us?

An excerpt from Utopia Avenue

Dean hurries past the phoenix theatre, dodges a blind man in dark glasses, steps onto Charing Cross Road to overtake a slow-­moving woman and pram, leaps a grimy puddle, and swerves into Denmark Street where he skids on a sheet of black ice. His feet fly up. He’s in the air long enough to see the gutter and sky swap places and to think, This’ll bloody hurt, before the pavement slams his ribs, kneecap, and ankle. It bloody hurts. Nobody stops to help him up. Bloody London. A bewhiskered stockbroker type in a bowler hat smirks at the long-­haired lout’s misfortune and is gone. Dean gets to his feet, gingerly, ignoring the throbs of pain, praying that nothing’s broken. Mr. Craxi doesn’t do sick pay. His wrists and hands are working, at least. The money. He checks that his bankbook with its precious cargo of ten five-­pound notes is safe in his coat pocket. All’s well. He hobbles along. He recognizes Rick “One Take” Wakeman in the window of the Gioconda café across the street. Dean wishes he could join Rick for a cuppa, a smoke, and a chat about session work, but Friday morning is rent-­paying morning, and Mrs. Nevitt is waiting in her parlor like a giant spider. Dean’s cutting it fine this week, even by his standards. Ray’s bank order only arrived yesterday, and the queue to cash it just now took forty minutes, so he pushes on, past Lynch & Lupton’s Music Publishers, where Mr. Lynch told Dean all his songs were shit, except the few that were drivel. Past Alf Cummings Music Management, where Alf Cummings put his podgy hand on Dean’s inner thigh and murmured, “We both know what I can do for you, you beautiful bastard; the question is, What will you do for me?,” and past Fungus Hut Studios, where Dean was due to record a demo with Battleship Potemkin before the band booted him out.

“All right mate, sit down on the step here. Where’s it hurt?”

The man whimpers and leans into Dean. “Aaa-­aaaggh.”

“What seems to be the problem?” The new arrival is Dean’s age, has short hair and a sensible duffel coat. He loosens the collapsed man’s tie and peers into his eyes. “I say, my name’s Hopkins. I’m a doctor. Nod if you understand me, sir.”

The man grimaces, gasps, and manages to nod, once.

“Good.” Hopkins turns to Dean. “Is the gentleman your father?”

“Nah, I never seen him till now. His chest hurts, he said.”

“Chest, is it?” Hopkins removes a glove and presses his hand against a vein in the man’s neck. “Highly arrhythmic. Sir? I believe you’re having a heart attack.”

The man’s eyes widen; fresh pain scrunches them up.

“Exactly. Run there as fast as you can, tell them a chap’s having a heart attack outside the tobacconist on Denmark Street and that Dr. Hopkins needs a stretcher team, pronto. Got all that?”

Hopkins, Denmark Street, stretcher. “Got it.”

“Good man. I’ll stay here to administer first aid. Now run like the bloody clappers. This poor devil’s depending on you.”

Dean jogs across Charing Cross Road, into Manette Street, past Foyles bookshop, and through the short alley under the Pillars of Hercules pub. His body has forgotten the pain of his fall just now. He passes dustmen tipping bins into a rubbish van on Greek Street, pounds up the middle of the road to Soho Square, where he scares a pool of pigeons into flight, nearly loses his footing a second time as he turns the corner onto Frith Street, and bounds up the steps of the clinic and into a reception area where a porter is reading the Daily Mirror. donald campbell dead, declares the front page. Dean gasps out his message: “Dr. Hopkins sent me . . . a heart attack on Denmark Street . . . needs a stretcher team, on the double . . .”

The porter lowers the newspaper. Flakes of pastry cling to his mustache. He looks unconcerned.

“’Course I did. You’re shouting in my face.”

The porter snorts inwards, deep and hard. “Withdraw a hefty sum of money from a bank prior to your encounter with this ‘Dr. Hopkins,’ did you?”

The porter flicks crumbs off his lapel. “Still in possession of that money, are you, son?”

“It’s here.” Dean reaches into his coat for his bankbook. It’s not there. It must be. He tries his other pockets. A trolley squeaks by. A kid’s bawling his eyes out. “Shit—­I must’ve dropped it on the way over . . .”

Dean remembers the man falling against his chest . . . “No. No. It was a real heart attack. He could hardly stand up.” He checks his pockets again. The money’s still missing.

“It’s cold comfort,” says the porter, “but you’re our fifth since November. Word’s got round. Every hospital and clinic in central London has stopped sending stretchers for anyone called Hopkins. It’s a wild goose chase. There’s never anyone there.”

“Are you about to say, ‘They didn’t look like pickpockets’?”

Dean was. “How could he’ve known I had money on me?”

“What’d you do if you were going fishing for a nice fat wallet?”

Dean thinks. The bank. “They watched me make the withdrawal. Then they followed me.”

The porter takes a bite of sausage roll. “Hole in one, Sherlock.”

“You could file a report at the cop shop, but don’t hold your breath. For the Old Bill, Soho’s surrounded by signs saying, ‘Abandon Hope, All Ye Who Enter Here.’ ”

“My landlady’s a bloody Nazi. She’ll turf me out.”

The porter slurps his tea. “Tell her you lost it trying to be a Good Samaritan. Maybe she’ll take pity on you. Who knows?”

Mrs. Nevitt sits by the tall window. The parlor smells of damp and bacon fat. The fireplace looks boarded up. The landlady’s ­ledger is open on her writing bureau. Her knitting needles click and tap. A chandelier, forever unlit, hangs from the ceiling. The wall­paper’s once-­floral pattern has sunk into a jungle gloom. Photographs of Mrs. Nevitt’s three dead husbands glower from their gilt frames. “Morning, Mrs. Nevitt.”

“Not half. I got out my rent money, but two pickpockets did me over on Denmark Street. They must’ve seen me cash my bank order and followed me. Daylight robbery. Literally.”

She thinks I’m spinning her a yarn, thinks Dean.

“More’s the pity,” Mrs. Nevitt continues, “you didn’t persevere at Bretton’s, the Royal Printers. That was a proper position. In a respectable part of town. No ‘muggings’ in Mayfair.”

“No concern of mine, I’m sure. My concern is rent. Am I to take it you want more time to pay?”

Dean relaxes, a little. “Honest, I’d be ever so grateful.”

David Mitchell is the award-winning and bestselling author of Slade House, The Bone Clocks, The Thousand Autumns of Jacob de Zoet, Black Swan Green, Cloud Atlas, Number9Dream, and Ghostwritten. Twice shortlisted for the Man Booker Prize, Mitchell was named one of the 100 most influential people in the world by Time in 2007. With KA Yoshida, Mitchell translated from the Japanese the internationally bestselling memoir The Reason I Jump. He lives in Ireland with his wife and two children. 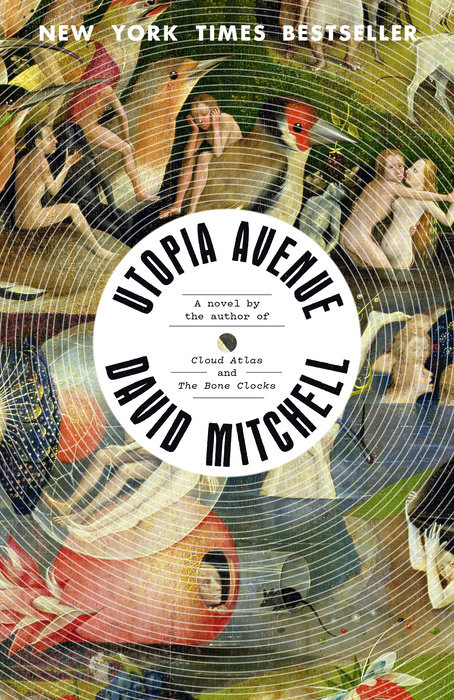