The powerful story of a college basketball team who carried an era’s brightest hopes—racial harmony, social mobility, and the triumph of the underdog—but whose success was soon followed by a shocking downfall

“A masterpiece of American storytelling.”—Gilbert King, Pulitzer Prize–winning author of Devil in the Grove

The unlikeliest of champions, the 1949–50 City College Beavers were extraordinary by every measure. New York’s City College was a tuition-free, merit-based college in Harlem known far more for its intellectual achievements and political radicalism than its athletic prowess. Only two years after Jackie Robinson broke the Major League Baseball color barrier—and at a time when the National Basketball Association was still segregated—every single member of the Beavers was either Jewish or African American. But during that remarkable season, under the guidance of the legendary former player Nat Holman, this unheralded group of city kids would stun the basketball world by becoming the only team in history to win the NIT and NCAA tournaments in the same year.

This team, though, proved to be extraordinary in another way: During the following season, all of the team’s starting five were arrested by New York City detectives, charged with conspiring with gamblers to shave points. Almost overnight these beloved heroes turned into fallen idols. The story centers on two teammates and close friends, Eddie Roman and Floyd Layne, one white, one black, each caught up in the scandal, each searching for a path to personal redemption. Though banned from the NBA, Layne continued to devote himself to basketball, teaching the game to young people in his Bronx neighborhood and, ultimately, with Roman’s help, finding another kind of triumph—one that no one could have anticipated.

Drawing on interviews with the surviving members of that championship team, Matthew Goodman has created an indelible portrait of an era of smoke-filled arenas and Borscht Belt hotels, when college basketball was far more popular than the professional game. It was a time when gangsters controlled illegal sports betting, the police were on their payroll, and everyone, it seemed, was getting rich—except for the young men who actually played the games.

Tautly paced and rich with period detail, The City Game tells a story both dramatic and poignant: of political corruption, duplicity in big-time college sports, and the deeper meaning of athletic success.

An excerpt from The City Game

On a warm October afternoon, in the hours after a rain, the oldest buildings on the City College campus glisten and shimmer in the light. Their stone walls are heavy and dark and rough hewn, flecked throughout with crystalline mica (the same ingredient that gives sparkle to the city’s sidewalks), and in a college open only to residents of New York City the stone itself is as local as can be, having spent the entirety of creation on that very spot.

In the latter years of the nineteenth century, the trustees of the College of the City of New York realized that the school’s rapidly growing population, then crammed into a single building downtown on Lexington Avenue, required a new, larger campus. A site was purchased on St. Nicholas Heights, a steep, rocky bluff overlooking western Harlem, where the wind sweeps in from the Hudson River, and in 1897 the commission was awarded to the distinguished New York architect George B. Post. Setting quickly to work, Post hit on an ingenious cost-­saving measure: The Manhattan schist that would have to be excavated from the site, he realized, could be used to construct the buildings themselves. The college was thus to be made from its own bedrock, painstakingly quarried and shaped and raised into the sky, and the amount removed for the foundations turned out to be almost exactly the amount that was needed for the walls. “Nature herself seemed to have been aware that the College of the City of New York was to locate there and provided accordingly,” marveled the reviewer for The American Architect and Building News. “Had the rock been planned to order it could not have been better suited to the purpose.”

After two years of design, three of delay, and four of construction, City College’s new uptown campus finally opened in 1907. The campus that George Post had created—­five large buildings grouped around a central quadrangle—­was built in the style then known as Collegiate Gothic, a medieval dreamscape of turrets and gables and parapets, inscribed crests, arched doorways, and leaded glass in broad mullioned windows. Many of the excavated stones had emerged from the earth streaked and stained with rust; rather than set those aside, however, Post ordered that the most heavily discolored ones should be reserved for the exterior walls. It was a mandate that bewildered and maddened the Italian stonemasons who had been hired for the job, but Post was adamant, insisting that the imperfections would provide welcome variations in color and tone. Perhaps most striking of all, he had trimmed the dark-­gray schist not in the more traditional fashion, with a lighter-­colored stone such as lime or sandstone, but instead with smooth terra-­cotta glazed the snowiest white. It was a daring choice, and little appreciated by the critics of the time. Writing in The Architectural Record, Montgomery Schuyler called Post’s mix of materials “violent and disturbing” and “a serious blemish on the artistic result,” and further expressed the hope that Manhattan’s sooty air would eventually darken the terra-­cotta. (In 1939, however, thirty-­two years after CCNY opened its uptown campus, the WPA Guide to New York City reported: “The schist has aged and blackened, but the terra cotta remains a pristine white.”)

Something else, though, is odd about that terra-­cotta. A sharp-­eyed observer walking past any of Post’s original buildings will notice an unexpected assemblage of creatures cavorting on the trim overhead: gargoyles and grotesques, more than six hundred of them in all, dragons and owls and shrieking harpies, and a host of whimsical little men robed and cowled like medieval monks (or the scholarly ancestors of Disney’s movie dwarfs), laughing, scowling, leering, beckoning with crooked fingers to the pedestrians below. George Post himself had overseen the design of all the grotesques; each was different, and each had been crafted to reflect the activities of the building on which it was placed. On the Chemistry Building the little men seem to be conducting experiments, stirring beakers and grinding ingredients with a mortar and pestle. The Mechanics Arts Building features laborers: They hammer and drill, beat on anvils, fan bellows; one struggles to turn a gigantic bolt that seems to be emerging from the building itself. In Wingate Hall, home of the school gymnasium, the front doorway is framed by a pair of recumbent lions, but the heroic effect at street level is undercut by the scene going on above, where a squad of grinning tumblers use the building’s cornice as a kind of gymnastic bar, throwing themselves into a variety of acrobatic contortions.

Inside Wingate on this particular day, Wednesday, October 5, 1949, City College’s basketball team was conducting its first practice of the season—­an event scarcely noticed by the rest of the campus. Cars honked on rain-­slicked Convent Avenue, the thoroughfare that bisected the campus; the ginkgo trees along the avenue were tinged now with gold, their leaves like delicately tinted Japanese fans, providing a burst of color in a landscape otherwise mostly bare. The young men hurrying through the quadrangle wore cardigan sweaters and button-­down shirts and pressed slacks; some of the older ones, mostly World War II veterans in school on the GI Bill, preferred jackets and ties. The women wore low-­heeled pumps, and sweater sets with pleated skirts, bought at discount stores like Loehmann’s or Alexander’s in the Bronx or, downtown, Best & Company or S. Klein. Some of the more scholarly-­looking of the men wore horn-­rimmed glasses in black or tortoiseshell, the women cat’s-­eye glasses in black or white or silver. Those who weren’t on their way somewhere stood on the sidewalk in front of the Main Building, or in clusters by the statue of General Alexander Webb, hero of the Battle of Gettysburg and the college’s second president. They tossed raincoats over their arms, looking up doubtfully at the unsettled sky; many of them smoked cigarettes and talked.

A reporter from The Saturday Evening Post, observing City College students a couple of years earlier, had written that a visitor to the campus “will hear them talking like social workers determined to correct all the injustices of a harsh world by next Tuesday.” But that was just an easy quip meant for a middle-­American readership; far more likely, a visitor on this afternoon would have heard them talking about parties or dates from the previous weekend, or about plans for the upcoming one. Several of the Brooklyn movie theaters were showing the Cary Grant comedy I Was a Male War Bride; afterward, if things went well, there might be a burger and a malted at Garfield’s cafeteria or a slice of cheesecake at Junior’s. Up in the Bronx, the Ritz was showing My Favorite Brunette, another good date film, while guys who were on their own could catch Jimmy Cagney in White Heat at the Fordham. Some of the students likely talked about the latest news of the mayoral race (William O’Dwyer, the Democrat, seemed to be cruising to reelection), or, if their families owned a television set, the Milton Berle show from the night before, or perhaps their classes or one of the lectures upcoming that week. Professor Henry Leffert’s comparative literature class was always popular; later that month there would be a lecture titled “Novels of the Forties” by a promising young writer named Gore Vidal. (Professor Leffert was himself a notable figure on the campus. He wore a beret, collected modern art, and frequented the opera and the ballet, and though he was a fierce advocate of higher culture he also admitted to reading the novels of Mickey Spillane. When a student once asked him why, he replied, “Well, it’s good to see how the other half lives. After all, there are so many of you.”)

Surely much of the talk, too, was about the first game of the World Series, played in Yankee Stadium earlier that afternoon between the Yankees and the Dodgers. The game had been a tense, tautly contested pitchers’ duel—­scoreless until the bottom of the ninth—­and for those two and a half hours the city had come almost to a halt. Commuters on their way to Grand Central or Penn Station missed their trains to duck into a local tavern to drink a beer and watch the game; in the garment district, racks of dresses and furs clogged sidewalks, left there by shipping clerks clustered around radios in the doorways of office buildings. For days, most of the papers had been running previews of the Series not on the sports pages but the front page; the headline of that morning’s Daily Mirror had read yankees 3 to 2 to win opener. It seemed to no one especially remarkable that one of the city’s major newspapers would devote its front page to a presentation of the latest gambling odds.

Matthew Goodman is the author of three previous books of nonfiction: Eighty Days: Nellie Bly and Elizabeth Bisland’s History-Making Race Around the World; The Sun and the Moon: The Remarkable True Account of Hoaxers, Showmen, Dueling Journalists, and Lunar Man-Bats in Nineteenth-Century New York; and Jewish Food: The World at Table. A New York Times bestseller, Eighty Days has been translated into eight languages. Goodman’s work has appeared in The American Scholar, Harvard Review, Salon, and many other publications. He lives in Brooklyn, New York, with his wife and two children. 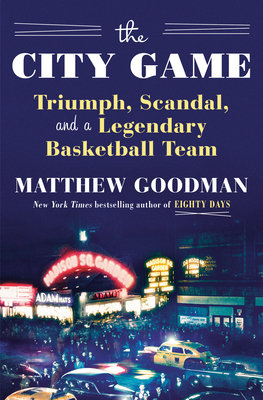