Prepare your palette for more than a dozen all-new recipes in this eBook-exclusive companion to the official Game of Thrones cookbook! Discover the tastes of Dorne, including one dish from The Winds of Winter, the highly anticipated next chapter of George R. R. Martin’s beloved series, A Song of Ice and Fire.

The most culturally distinct region of the Seven Kingdoms, Dorne is the sun-soaked desert land characterized by its unique customs and brash resistance to the Iron Throne. The Dornish people are known for their bold passions—perhaps best exemplified by the Red Viper himself, Oberyn Martell—and this fiery temperament has yielded a perfect pairing: their delicious cuisine. Packed with fresh flavor, zesty seasonings, and plenty of heat, this eclectic sampling of Southern delights can be enjoyed all year round, with savory fare to warm your bones in Winterfell and frozen desserts to help you keep cool in Sunspear. Inside, you’ll find:

With all the imagination, authenticity, and tongue-in-cheek humor that won A Feast of Ice and Fire a cult following, From the Sands of Dorne is an oasis for foodies everywhere.

An excerpt from From the Sands of Dorne: A Feast of Ice & Fire Companion Cookbook

Of all the regions in Westeros, Dorne is the most exotic. Because it lies in the south of Westeros, separated from the rest of the continent by high mountains, Dorne has remained culturally independent from the rest of the seven kingdoms. Dornish identity is full of remnants of their Rhoynish past and has been shaped by a history of resistance to foreign rule. This independent spirit combined with the hot, arid climate has produced a cuisine as bold as Dorne itself.

Hot climates often breed hot tempers, not to mention crops of fiery peppers. That same climate not only calls for quick-to-cook meals, but also refreshing drinks and chilled desserts, the ice for which could be brought down from the mountains and stored in special icehouses.

Foreign influences continue to creep into Dorne as well. Trading galleys gather at Planky Town, where they unload the eastern spices so beloved by the Martells, and fill their holds with citrus, olives, and Dornish wines for King’s Landing and the Free Cities.

I tried to take all of these factors into consideration as I built this collection of recipes, adding dishes that could exist in Dorne based on the Dornish culture, climate, access to trade routes, and connection to historical cultures that may have provided inspiration for the region. This approach includes numerous limitations—for example, many real world dishes that I might think of as Dornish include tomatoes, which are not found in Westeros. However, the result is a cookbook that is authentic to the world of ASoIaF. In addition to these new recipes, I have included several previously unpublished recipes based on dishes in A Dance of Dragons, and one from George Martin’s upcoming The Winds of Winter. I hope you find them as delicious and exhilarating as I do. May the fiery peppers leave you feeling Unbowed, Unbent, and Unbroken.

Yours in mutual fandom,
Chelsea

A Note on Fiery Peppers:
Although in our own history peppers were a New World ingredient, they appear in many places in Westeros, predominantly Dorne. Fortunately for many of us, dried chile peppers of a wider and wider variety are increasingly finding their way to markets. So the next time you’re preparing to make a Dornish dish, push aside that bottle of generic red pepper flakes and try something new. This list is by no means exhaustive, but is a great place to start exploring the wild world of chiles:

Aleppo peppers, about on par with anchos for heat, have a unique and subtle tartness all their own. A pinch of ground Aleppo pepper makes an ideal topping for just about anything.

Anchos are the dried form of the poblano pepper and are often described as having a sweet, almost raisin-like flavor. They tend to run mild to medium-hot.

Chipotles are smoked, dried jalapeño peppers. That smoky flavor comes through, despite the fact that they’re on the hotter side, making a flavorful addition to any dish.

Bird’s-eye peppers are tiny, but their heat is long. With as much flavor as burn, they don’t overwhelm, but still satisfy those who wish for a more intense heat than the other offerings.

Ghost peppers are perhaps the best-named peppers for a Dornish house such as House Manwoody, with its crowned skull banner. This is about as hot as it gets, and extreme care should be taken when handling them.

Although this dish takes some careful assembling, the flavorful payout is well worth the fuss. It sports a number of interesting flavors: black beans redolent with cumin, a sauce of roasted peppers and sausage, creamy feta, and egg, all atop a homemade tortilla. It’s just the sort of interesting and filling breakfast that a well-heeled Dornishman might choose to start his day.

Start by making the tortillas: Combine the cornmeal and a pinch of salt, then begin adding the hot water, stopping when you have a workable dough. Knead this a few times to make sure it is thoroughly mixed, then divide the dough into four balls. Place one of these balls of dough between two sheets of parchment paper and begin gently flattening it with a rolling pin. Continue flattening until the tortilla is very thin, then carefully peel back the paper. Repeat with the remaining dough.

Set a dry skillet over medium heat. When it is hot, gently drop a tortilla into the pan. Cook it for about 1 minute on each side, or until the tortilla starts to turn a golden brown. Set the tortilla aside and repeat until all the tortillas are cooked.

Next, puree the roasted red peppers in a food processor with just enough of the olive oil to make the mixture smooth (about 1 tablespoon); set the puree aside. In a small saucepan over medium heat, fully cook the sausages, or heat them through if they are precooked. Pour in the pepper puree and cook for another minute. Set the pan aside.

In a separate pan, heat the remaining olive oil and add the minced garlic. Cook until the garlic is light brown and fragrant, then add the black beans, stirring until the beans are hot. Set aside.

Fry the eggs sunny-side up, sprinkling them with a little smoked paprika and salt for color and flavor.

To assemble the dish, lay a tortilla on a plate. Spread a quarter of the beans on it, then top them with a fried egg. Add a few dollops of the pepper and sausage mix, then sprinkle cheese and parsley over all. Serve and enjoy!

Cook’s Note: Looking for a quicker breakfast? You can easily make the tortillas, sausage mixture, and beans the night before, then reheat them in the morning and fry up the eggs. Or use good-quality premade corn tortillas instead of making your own.

Chickpeas are among the oldest domesticated legumes and are popular in many Mediterranean cuisines. When coated with honey and spices in a range of heat profiles, these crunchy morsels pack a sweet and spicy punch. Equally suited to idle snacking in the shade of an orange tree and to use as an on-the-go protein slipped into a saddlebag, the only downside to these tasty snacks is that they will be gone long before you’re tired of them.

Preheat the oven to 375°F and lightly oil a baking sheet. Rinse the chickpeas, pat them dry, and remove the loose skins (although removing the skins is not a must, it’s a good idea, as they will burn in the oven). Arrange them on the baking sheet. Bake for 45 minutes, moving them around on the baking sheet occasionally, or until crunchy. Leave the oven on.

Meanwhile, combine the other ingredients in a medium bowl. When the chickpeas are crunchy, add them—while still hot—to the bowl of seasoning mixture, toss them until they’re well coated, then return them to the baking sheet and bake for another 5 minutes. The chickpeas, when cool, should be crunchy. If not, return them to the oven for 5 additional minutes or until they become so. Store the chickpeas in an airtight container.

Chelsea Monroe-Cassel currently runs Inn at the Crossroads, a popular food blog based on A Song of Ice and Fire, which she started with her A Feast of Ice and Fire co-author, Sariann Lehrer. An avid fans of the fantasy genre, Monroe-Cassel brings to the table a unique combination of artistry, historical knowledge, and love of food. 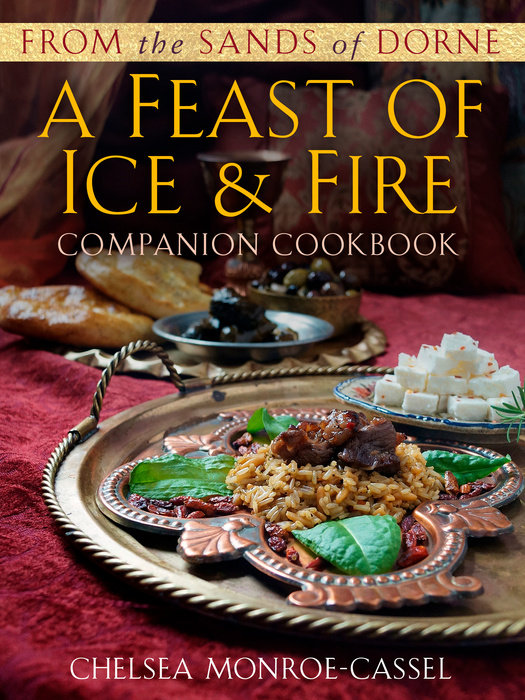