A Novel of Suspense

On the Norwegian sea, an icebreaker forges its way through frozen waters to a remote island in the Arctic, carrying a scientific team that hopes to unearth the bodies of long-dead miners. Washington Post reporter Frank Daly has the story of a lifetime. But his plan to join the scientists on their historic mission is ruined by a ferocious storm. When he meets up with the ship upon its return to port in Norway, it is clear that something has gone terribly wrong.

Fear haunts the faces of the crew. No one will talk. And someone wants Daly to stop asking questions. But the more he uncovers, the more dangerous the stakes become. Until at last he comes face-to-face with a shocking secret, a secret that pitches him into a harrowing race to prevent nothing less than . . . apocalypse.

An excerpt from The First Horseman

Tommy was nervous. Susannah could tell, because she knew he liked to talk, and yet, he hadn't said a word for fifty miles. Not that she could blame him. She was nervous, too. And excited. And scared.

It was dusk when they got off the Taconic Parkway, switching on the headlights as they traveled through rolling farmland, a Ralph Lauren landscape where the houses were so perfect, you just knew they were owned by doctors and lawyers. They were "mini-estates," or enclaves with names like "Foxfield Meadows," and they didn't really grow anything except, maybe, sun-dried tomatoes and arugula.

As they passed the Omega Institute, Susannah wondered aloud—what's that? And the driver, Tommy, made a sound like a duck—kwak-kwak-kwak! So both of them laughed (a little too loud), and Susannah thought, Some kind of New Age thingie.

Not that she'd be the one to do it—she couldn't hurt a fly. That was Vaughn's job, the teeth and the fingers. And giving the injections. He had to do that, too, because he was the doctor. (And a good one, Tommy said. "Vaughn's an 'Old Blue,' aren't ya, Vaughn?" Whatever that was.)

Still, you had to wonder why it was necessary to do the teeth. And the fingers. Why not just . . . dump them? Or, better yet, leave 'em where they lay.

Susannah thought about it for a while, then shrugged to herself. Solange moves in strange ways, she thought, smiling at the in-joke. Sometimes he did things just to be theatrical. Make a splash. Shake 'em up.

Not that it made any difference. They weren't going to get caught. Everything had been rehearsed, from the knock on the door to the handcuffs, and there wasn't anything they hadn't thought through.

Like the U-Haul. The U-Haul was Solange's idea, and it was brilliant because, once they'd fixed it up, it gave Vaughn a sort of operating room in the back. So he could do what he had to do even while they were driving away.

And it was inconspicuous, too. Because U-Hauls were everywhere. There wasn't anywhere in America they didn't belong. Not even here. Everybody used them.

Her job was to get inside the house and, once there, make sure the Bergmans couldn't get to their gun. So it was two jobs, really, and what made everyone think she could bring it off was the fact—she wasn't bragging, really, it was just a fact of life—the fact that she was "cute." Cheerleader cute. And pregnant. Which made her kind of vulnerable-looking.

And that made people trust her. Which was important. Because the Bergmans were totally paranoid—like someone was out to kill them. Susannah smiled at the thought. Talk about irony—hello?

But mostly it was scary and horrible, and she wished that she wasn't a part of it, except: it had to be done. She knew it had to be done because Solange said so, and Solange never lied. Ever.

And it wasn't going to be painful. Vaughn said they wouldn't feel a thing. Just "a bee sting" from the needle. And that would be that.

Unless, of course, something went wrong. Like, if they had a Doberman or something. But, no: they didn't have a dog, because if they did, Lenny would have mentioned it. Lenny was their son, and if there was a Doberman walking around, he'd have told them about it.

Like Marty did with the gun. Not that Marty was related to them, but he was close. He'd said, I don't think the old f*** knows how to use it, but he's got a .38 Special that he keeps in the vestibule—in a little table, just under the telephone. I used to kid him about being "strapped," and he'd say, "What are you talking about, what strap? I don't see any strap." And the thing is, he wasn't kidding. I mean, like this guy is livin' in another century.

Even so...what if the needle broke off, or the woman started screaming? Everything would go real bad, fast. Like with Riff—when she was a kid, and the car hit him. And her father tried to put him down with the .22, but he was so nervous, he couldn't find the heart. So . . . he just kept shooting.

If that happened, or something like that, there'd be blood all over the place—and all over them. And the thing is, legally, what they were doing was murder. Which, for someone who'd been brought up Catholic, even if she didn't practice anymore, was about as bad as it gets.

Because killing was wrong. She knew that. No ifs, ands, or buts. Killing someone was dead wrong—

Unless you were a soldier. And that's exactly what they were—she and Tommy and Vaughn, and the French guy in the back of the truck. They were soldiers. Knights, even. Just like in the Crusades.


Susannah was thinking about the Secret War, Solange's war, her war, when the turn signal began to click, and the truck turned down a two-lane country road, scattering a clutch of deer that were feeding on the verge.

A battered U-Haul with Arizona tags, the truck trembled and shook as it rattled over the washboarded lane, slowing down at every letter box, then speeding up, then slowing down again as the driver hunted for the right address. Finally, the truck came to a stop beside a rusting mailbox:

For a long moment Tommy stared at the silvery, stick-on letters, muttering to himself. Then he killed the headlights, backed up, shifted into Drive and, holding his breath, entered the long driveway.

Susannah squirmed in her seat and took a deep breath. Exhaling, she made a sort of stuttering sound, then wet her lips with her tongue.

The truck crunched slowly over the gravel toward the front porch of a white farmhouse. There, beneath a bower of old walnut trees, Tommy killed the engine, the passenger door opened, and Susannah climbed out.

She was, as anyone could see, pretty, young, and pregnant, with huge brown eyes and ash-blond hair. She wore a yellow sun dress under a tattered, gray cardigan that was much too big, and which might well have been her father's. With a "Here goes" glance at the driver, she took a deep breath and mounted the steps to the porch, glancing at the pots of mums on either side.

Reaching the top of the steps, she hesitated, suddenly queasy and weak. For a long moment she swayed in front of the door. Finally, she knocked—ever so softly, secretly hoping that no one was home.

There was no answer at first, but she could hear the television inside, and so she knocked again. Louder this time. And then again, almost banging on the screen door.

Eventually, the inner door swung open, and a woman in her fifties peered out from behind the latched screen door. "Hello?" She pronounced the word as if it were a question.

Martha Bergman's eyes took in the pregnancy, then drifted to the U-Haul, where a wiry young man (the girl's husband, she supposed) gave a little wave. The side of the truck was painted with the image of a senorita, a Spanish lady peering coyly over the top of her fan. U-Haul liked to do that, painting the trucks with scenes that suggested where they were from: cowboys and lobsters and skyscrapers. Martha figured that this truck must be from New Mexico, or someplace in the Southwest.

"Can I help you?" Martha asked.

"I hope so," Susannah replied, shifting her weight from one foot to the other. "We're really lost."

Martha's face softened. "Where are you looking for?"

The girl shook her head and shrugged. "That's the problem. We lost the number. But I know it's one of these houses—one of the houses on Boice Road."

Martha's face settled into a frown. Then her eyes fell to Susannah's stomach and, suddenly reassured, she smiled, unhooked the latch to the screen door, and held it open. "Of course," she said. "Come on in. The telephone's over there, on the little table."

"That's so nice of you," Susannah said as she stepped into the vestibule. "And, wow—what a beautiful house!" In fact, it was a lot like her parents' house, with fake Bokharas on the hardwood floors and overstuffed furniture from the Pottery Barn.

From the next room a man's voice boomed out above the noise of the television. "Martha! What are you doing? You're missing it!"

"Who are you talking to?" the man asked.

"I'm letting a young woman use the phone," Martha answered, and, turning to Susannah, sighed hugely. "The Jets are playing," she explained.

John Case is the pseudonym of an award-winning investigative reporter and the author of the New York Times bestsellers The Genesis Code and The First Horseman, as well as two nonfiction books about the U.S. intelligence community. He lives in Afton, Virginia.

John Case is the pseudonym of an award-winning investigative reporter and the author of the New York Times bestseller The Genesis Code, as well as two nonfiction books about the U.S. intelligence community. A resident of Washington, D.C., he is the proprietor of a company that specializes in international investigations for law firms and labor unions.

Jim Hougan has won awards for his investigative journalism. He is the author of three nonfiction books: Decadence, about the sixties and seventies; Spooks, about the American intelligence community; and Secret Agenda, about Watergate. With his wife, Carolyn Hougan, he has written three thrillers under the pseudonym John Case: the New York Times bestseller The Genesis Code, The First Horseman, and most recently, The Syndrome. An Alicia Patterson and Rockefeller Foundation fellow, Hougan is the former Washington editor of Harper’s Magazine. He has also reported for National Public Radio’s All Things Considered and produced documentary films for Frontline, 60 Minutes, A&E, and the Discovery Channel. He and his wife live in Afton, Virginia.

A Novel of Suspense 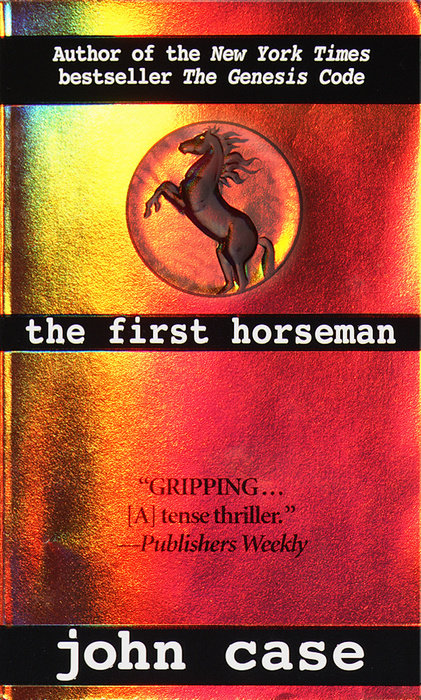