One of the best memoirs of 2016 (Library Journal) and winner of the Northern California Book Festival Award! Fresh, charming, and irresistible, Champagne Baby turns a familiar tale on its head: Instead of yet another American seeking the French secret to good living, a Frenchwoman finds her purpose—much to her surprise—in the U.S.

Laure Dugas was born into a family of winemakers from two storied regions of France: Champagne and the Rhône Valley. But she wants little to do with the family business. It is only when her uncle offers to send her to New York City to learn English and represent his wines to the American market that Laure bids adieu to her boyfriend and begins her journey of discovery.

The job, it turns out, is both harder and easier than expected. Laure must speak in a new language about a subject in which she has no expertise. With the pedigree of an expert, even as she feels like a fraud, Laure dives into an industry still dominated by men, winning over restaurateurs and sommeliers, diligently developing her palate, and traveling across the vast country that is her new home.

For the first time, Laure is able to distinguish among the famous wines of her native land. She learns to greet a wine by the nose and judge a bottle not by its industry rating but by the balance of its flavors. Overcoming homesickness, culture shock, and the trials of a long-distance relationship, Laure manages to settle into her new milieu, her wine-glass-half-full attitude turning an eight-month stint into a three-year adventure.

Part coming-of-age memoir, part travelogue, sprinkled throughout with regional maps and wine recommendations, Champagne Baby imparts the critical lessons that pair with both wine and life: You’re Better Than the Cheapest Bottle, There’s Always Occasion for Champagne, and Trust Your Palate. It encourages readers to view themselves and their surroundings with newfound appreciation, and to raise their glasses with open-mindedness and joy.

Includes maps of wine regions throughout

“A coming-of-age story of a French girl in love with America, Champagne Baby is a compulsive read filled with keen observations and sharp descriptions of place and culture—a modern, exuberant tale of two cities and discovery.”—Mireille Guiliano, #1 New York Times bestselling author of French Women Don’t Get Fat

“Dugas’s story of being a recent university student and eager to jump at life’s chances will resonate with audiences both young and old, wine aficionados and newcomers.“—Library Journal (starred review)

“Champagne Baby is, like the best bottle of wine, fun and complex, sensual and smart, and totally satisfying.”—Hannah Howard, columnist, “Scoop du Jour”

“An enticing story that evolves and ventures into unexpected directions and nourishes a result that Dugas had never imagined.”—Richard Vine, PhD, author of The Curious World of Wine

“[A] delightful memoir . . . [Dugas] entertainingly reflects on what she learned about herself, her family’s wine business, and wines in general while living in the U.S.”—Kirkus Reviews

“This insightful memoir has the capacity to inspire and charm the novice wine drinker while also reinforcing and reminding the well-seasoned palate of the romance, the seduction of wine.”—Booklist

An excerpt from Champagne Baby

When I was a baby in Paris, my mother would dip her finger in champagne and rub it on my lips, to acclimate me to the taste and smell, she told people, because our family was from Champagne. I have no memory of this. The modern parent would be horrified. You are getting your baby drunk! You are giving her brain damage! But I’m sure she did it in good fun, and I don’t feel too much the worse for it

My mother’s grandparents cultivated our family’s first vines in Champagne in the 1930s before the war, and good wine still comes from our vineyard (a small one not found in many guides). My paternal grandfather managed all the wine distribution that came through Bercy during the war. My father went in a slightly different direction, selling fine spirits throughout France. His brother, my Uncle Alain, is a respected vintner in the esteemed Châteauneuf-du-Pape geographic appellation of the Rhône Valley. Wine is most definitely in my blood.

So you might think I am some kind of wine princess, that I was schooled in everything there was to know about wine from the moment I could speak, that in my youth I could have recited the great vintages of France the way the child of the Church knows her catechism. Oh pfft, you say, no wonder she is writing about wine: She’s French! Her family is in the business! And you would be right about my family, but not about me. I don’t deny that I grew up surrounded by wine. As a girl I watched my mother open a bottle of her family’s champagne at nearly any excuse. A friend stopping by the house? Champagne! The sun coming out after a little rain? Alors! Champagne! But the truth is that I knew almost nothing about it, except that there was plenty in the pantry. My pedigree, as it were, came with no “special” understanding at all, simply proximity.

And so what it comes to is this, and I have no compunction about sharing it with you right away: entitlement is the very opposite of what makes for the most rewarding, most open experience of wine. Growing up, I drank only one kind of champagne—my family’s—and could not have described any other, or even what made ours any good (though it benefits from some of the best terroir of Champagne, in Ambonnay).

Being French is not the answer, either. While France, in my opinion, possesses the tradition and know-how to make the best wines in the world, that doesn’t mean every French citizen can tell the difference between a Chablis and a Pouilly-Fumé (just as, despite what I learned as a child, from the TV show Dallas, not every American knows how to herd cattle). Being French can, in fact, actually breed complacency. I’ve seen plenty of my fellow countrymen and -women act a certain way to suggest they’re naturally gifted when it comes to wine, when that couldn’t be further from the truth. Nationality alone is not enough.

I’m a prime example. If you’d told me as a little girl that I would one day operate my own wine bar and store, premised on the pleasures of French wine, I’d have laughed out loud. It was the last thing I wanted to do, having grown up in a family like mine. And anyway, credentials guarantee nothing—in life as in wine. By the time I was nearly finished with university, I was still naïve about both. And I did not learn, really learn, what it means to love both until I left my family and my country at twenty-three, and moved to New York City.
This is the story I want to tell you.

1.
Nobody Knows Everything
On ne peut pas tout connaître

I’ve always had the unfortunate tendency to leap before I look. It’s not very French of me, but I can’t help it. So when my uncle pulled me aside after a family dinner in the summer of 2006 to offer me the chance to work in the U.S., I didn’t say I would think about it or consult with others. I said yes. He’d heard I wanted to learn English, and he needed someone to work with his new American wine importer, which was based in New York. Never mind that to do the job well I would need a minimum of two things, neither of which I had: a minimal competency in the English language, and a much deeper understanding of French wine. Never mind that I had a boyfriend in Paris, Jules, who had already patiently waited for me as I studied in Spain for a year. Nevermind also that my uncle needed someone for only the first six months of 2007, after which I would be on my own.

I said yes immediately, before I could think twice. Even my uncle was surprised; after a moment he asked if I’d heard correctly that this would mean traveling around les États-Unis—the whole country. I assured him I had, and he laughed and said that in that case we’d have to make our preparations.

My answer might have been different if he had told me that in January I’d find myself in front of a hundred and fifty sales representatives in Seattle, conducting a tasting of his wine with a shaky hand. I’d never spoken in front of even fifteen people, but there I was, not only expected to speak but to speak intelligently, while secretly knowing that I had only a fraction of the experience of every other person there. When it came to wine, all my uncle and I had in common was a last name.

I stood outside the tasting room unable to feel my toes out of nervousness, mouthing a script I’d gone over a hundred times. The opening monologue describing Château la Nerthe and what made it special was easy enough. It was the prospect of then having to walk the sales reps through the wine itself that worried me. If you’d handed me a glass of wine that morning, I could have instinctively told you whether it was good or bad—but not why. If you’d asked me to describe what I was tasting, I wouldn’t have known where to start.

There were a hundred ways for me to screw it up. The scripted pauses, which I needed to remember not to say out loud. I didn’t even know what fruit the English words “black currant” referred to. And what was a ruby color, exactly? I’d never seen a ruby in real life.

I’d have turned around and walked back to France if my audience hadn’t been expecting me. I opened the door, with only one thought echoing in my head: What have you gotten yourself into?

As I’ve said, it’s how I’ve always been, pressing on first and asking questions later. I said yes to my uncle, and yes to myself, that summer, and decided I’d move to America early, in November. That way, I thought, I’d be able to find a place to live, learn English, study wine, and conquer New York City, all in the two months before my job was to start. I was certain it would be plenty of time.

Laure Dugas was born in Paris to a family of winemakers and has worked for some of the biggest names in champagne. After three years in New York City, she moved back across the Atlantic to open a wine bar and store in the Batignolles neighborhood of Paris. L’Ébéniste du Vin was such a success that a year later Laure and her husband opened an oyster bar next door to it, then opened another restaurant in early 2016. Laure Dugas lives with her husband and daughter in Paris. 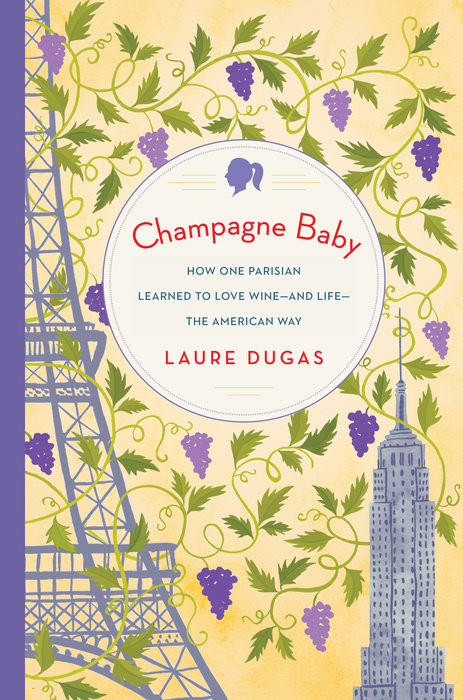