The early fiction of one of the nation’s most celebrated writers, Truman Capote, as he takes his first bold steps into the canon of American literature

Recently rediscovered in the archives of the New York Public Library, these short stories provide an unparalleled look at Truman Capote writing in his teens and early twenties, before he penned such classics as Other Voices, Other Rooms, Breakfast at Tiffany’s, and In Cold Blood. This collection of more than a dozen pieces showcases the young Capote developing the unique voice and sensibility that would make him one of the twentieth century’s most original writers.

Spare yet heartfelt, these stories summon our compassion and feeling at every turn. Capote was always drawn to outsiders—women, children, African Americans, the poor—because he felt like one himself from a very early age. Here we see Capote’s powers of empathy developing as he depicts his characters struggling at the margins of their known worlds. A boy experiences the violence of adulthood when he pursues an escaped convict into the woods. Petty jealousies lead to a life-altering event for a popular girl at Miss Burke’s Academy for Young Ladies. In a time of extraordinary loss, a woman fights to save the life of a child who has her lover’s eyes.

In these stories we see early signs of Capote’s genius for creating unforgettable characters built of complexity and yearning. Young women experience the joys and pains of new love. Urbane sophisticates are worn down by cynicism. Children and adults alike seek understanding in a treacherous world. There are tales of crime and violence; of racism and injustice; of poverty and despair. And there are tales of generosity and tenderness; compassion and connection; wit and wonder. Above all there is the developing voice of a writer born in the Deep South who will use and eventually break from that tradition to become a literary figure like no other.

With a foreword by the celebrated New Yorker critic Hilton Als, this volume of early stories is essential for understanding how a boy from Monroeville, Alabama, became a legend in American literature.

Praise for The Early Stories of Truman Capote

“Succeeds at conveying the writer’s youthful rawness . . . These stories capture a moment when Capote was hungry to capture the rural South, the big city, and the subtle emotions that so many around him were determined to keep unspoken.”—USA Today

“A window on the young writer’s emerging voice and creativity . . . Capote’s ability to conjure a time, place and mood with just a few sentences is remarkable.”—Associated Press

An excerpt from The Early Stories of Truman Capote

Parting of the Way

Twilight had come; the lights from the distant town were beginning to flash on; up the hot and dusty road leading from the town came two figures, one, a large and powerful man, the other, young and delicate.

Jake’s flaming red hair framed his head, his eyebrows looked like horns, his muscles bulged and were threatening; his overalls were faded and ragged, and his toes stuck out through pieces of shoes. He turned to the young boy walking beside him and said, “Guess this is just about time to make camp for tonight. Here, kid, take this bundle and lay it over there; then git some wood--and make it snappy too. I want to make the vittels before it’s all dark. We can’t have anybody seein’ us. Go on there, hurry up.”

Tim obeyed the orders and set about gathering the wood. His thin shoulders drooped from the strain, and his gaunt features stood out with protruding bones. His eyes were weak but sympathetic; his rose-bud mouth puckered slightly as he went about his labor.

Neatly he piled the wood while Jake cut strips of bacon and put them in a grease-coated pan. Then, when the wood was ready to be fired, he searched through his overalls for a match.

“Damn it, where did I put those matches? Where are they, you ain’t got ’em, have you, kid? Nuts, I didn’t think so; ah, here they are.” He drew a paper of matches from a pocket, lit one, and protected the tiny flame with his rough hands.

Tim put the pan with the bacon over the small fire that was rapidly catching. The bacon remained still for a minute or so and then a tiny crackling sound started, and the bacon was frying. A very rancid odor came from the meat. Tim’s sick face turned sicker from the fumes.

“Gee, Jake, I don’t know whether I can eat any of this junk or not. It doesn’t look right to me. I think it’s rancid.”

“You’ll eat it or nothin’. If you weren’t so stingy with that piece of change you got, we could a got us somethin’ decent to eat. Why, kid, you got a whole ten bucks. It doesn’t take that much to get home on.”

“Yes, it does, I’ve got it all figured out. The train fare will cost me five bucks, and I want to get a new suit for about three bucks, then I want to git Ma somethin’ pretty for about a dollar or so; and I figure my food will cost a buck. I want to git lookin’ decent. Ma an’ them don’t know I been bummin’ around the country for the last two years; they think I’m a traveling salesman--that’s what I wrote them; they think I’m just coming home now to stay a while afore I start out on a little trip somewhere.”

“I ought to take that money off you--I’m mighty hungry--I might take that piece of change.”

Tim stood up, defiant. His weak, frail body was a joke compared to the bulging muscles of Jake. Jake looked at him and laughed. He leaned back against a tree and roared.

“Ain’t you a pretty somethin’? I’d jes’ twist that mess of bones you call yourself. Jes’ break every bone in your body, only you been pretty good for me--stealin’ stuff for me an’ the likes of that--so I’ll let you keep your pin money.” He laughed again. Tim looked at him suspiciously and sat back down on a rock.

Jake took two tin plates from a sack, put three strips of the rancid bacon on his plate and one on Tim’s. Tim looked at him.

Jake looked at him. “I thought you said that you didn’t want any of this rancid meat.” Putting his hands on his hips he said the last eight words in a high, sarcastic, feminine voice.

Tim remembered, he had said that, but he was hungry, hungry and cold.

Jake laughed and stuck all the three pieces in his mouth.

Not another word was spoken. Tim went sulkily over in a corner, and, reaching out from where he was sitting, he gathered pine twigs, neatly laying them along the ground. Finally, when this job was finished, he could stand the strained silence no longer.

“Sorry, Jake, you know how it is. I’m excited about getting home and everything. I’m really very hungry too, but, gosh, I guess all there is to do is to tighten up my belt.”

“The hell it is. You could take some of that jack you got and go get us a decent meal. I know what you’re thinkin’. Why don’t we steal some food? But hell, you don’t catch me stealin’ anything in this burg. I heard from buddies that this place,” he pointed a finger toward the lights that indicated a town, “is one of the toughest little burgs this side of nowhere. They watch bums like eagles.”

“I guess you’re right, but you understand, I just ain’t goin’ to take any chances on losin’ none of this dough. It’s got to last me, ’cause it’s all I got an’ all I’m liable to get in the next few years. I wouldn’t disappoint Ma for anything in the world.”

Morning came gloriously, the large orange disc known as the sun came up like a messenger from heaven over the distant horizon. Tim had awakened just in time to see the sunrise.

He shook Jake, who jumped up demanding: “What do you want? Oh! it’s time to get up. Hell, how I hate to get up.” Then he let out a mighty yawn and stretched his powerful arms as far as they would go.

“This is shore goin’ to be one hot day, Jake. I shore am glad I ain’t goin’ to have to walk. That is, only as far back into that town as the railroad station is.”

“Yeh, kid. Think of me, I ain’t got any place to go, but I’m goin’ there, just walkin’ in the hot sun. I wish it would always be like early spring, not too hot, not too cold. I sweat to death in summer and freeze in winter. It’s a heck of a climate. I think I’d like to go to Florida in the winter, but there ain’t no good pickins there anymore.” He walked over and started to take out the frying utensils again. He reached into the pack and brought out a bucket.

“Here, kid, go up there to that farm house about a quarter of a mile up the road and git some water.”

Tim took the bucket and started up the road.

“Hey, kid, ain’t you goin’ to take your jacket? Ain’t you afraid I’ll steal your dough?”

“Nope. I guess I can trust you.” But down deep in his heart he knew that he couldn’t. The only reason he hadn’t turned back was because he didn’t want Jake to know that he didn’t trust him. The chances were that Jake knew it anyway.

Up the road he trudged. It was not paved, but even in the early morning the dust still stuck. The white house was just a little bit farther. As he reached the gate, he saw the owner coming out of the cow shed with a pail in his hand.

“Hey, Mister, can I please have this bucket filled with some water?”

“I guess so. There’s the pump.” He pointed a dirty finger toward a pump in the yard. Tim went in. He grasped the pump-handle and pushed it up and down. Suddenly the water came spilling out in a cold stream. He reached down and stuck his mouth to the spout and let cold liquid run in and over his mouth. After filling the bucket he started back down the road.

He broke his way through the brush and came back into the clearing. Jake was bending over the bag.

“Damn, they jes’ ain’t nothin’ left to eat. I thought, at least, there were a couple of slices of that bacon left.”

“Gee, but you’re generous.” Jake looked at him disgustedly.

Tim picked up his jacket and reached in the pocket. He brought out a worn leather wallet and unfastened the catch.

“I’m about to produce the dough that’s goin’ to take me home.” He repeated the words several times, caressing it each time.

Truman Capote was born September 30, 1924, in New Orleans. After his parents’ divorce, he was sent to live with relatives in Monroeville, Alabama. It was here he would meet his lifelong friend, the author Harper Lee. Capote rose to international prominence in 1948 with the publication of his debut novel, Other Voices, Other Rooms. Among his celebrated works are Breakfast at Tiffany’s, A Tree of Night, The Grass Harp, Summer Crossing, A Christmas Memory, and In Cold Blood, widely considered one of the greatest books of the twentieth century. Twice awarded the O. Henry Short Story Prize, Capote was also the recipient of a National Institute of Arts and Letters Creative Writing Award and an Edgar Award. He died August 25, 1984, shortly before his sixtieth birthday. 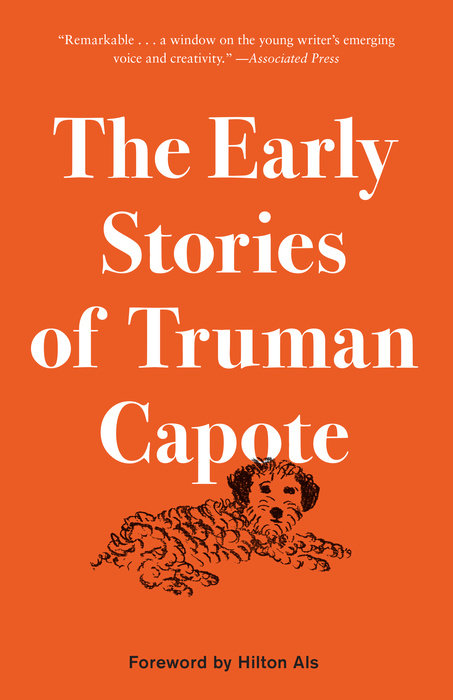