When a woman inherits her estranged mother’s bookstore in London’s Primrose Hill, she finds herself thrust into the pages of a new story—hers—filled with long-held family secrets, the possibility of new love, and, perhaps, the single greatest challenge of her life.

When Valentina Baker was only eleven years old, her mother, Eloise, unexpectedly fled to her native London, leaving Val and her father on their own in California. Now a librarian in her thirties, fresh out of a failed marriage and still at odds with her mother’s abandonment, Val feels disenchanted with her life.

In a bittersweet twist of fate, she receives word that Eloise has died, leaving Val the deed to her mother’s Primrose Hill apartment and the Book Garden, the storied bookshop she opened almost two decades prior. Though the news is devastating, Val jumps at the chance for a new beginning and jets across the Atlantic, hoping to learn who her mother truly was while mourning the relationship they never had.

As Val begins to piece together Eloise’s life in the U.K., she finds herself falling in love with the pastel-colored third-floor flat and the cozy, treasure-filled bookshop, soon realizing that her mother’s life was much more complicated than she ever imagined. When Val stumbles across a series of intriguing notes left in a beloved old novel, she sets out to locate the book’s mysterious former owner, though her efforts are challenged from the start, as is the Book Garden’s future. In order to save the store from financial ruin and preserve her mother’s legacy, she must rally its eccentric staff and journey deep into her mother’s secrets. With Love from London is a story about healing and loss, revealing the emotional, relatable truths about love, family, and forgiveness.

An excerpt from With Love from London

“There are far better things ahead than any we leave behind,” says the stranger sitting next to me on the airplane—a sixtysomething woman with feathered bangs and a hair tie clinging so tightly to her left wrist that I’ve spent most of the flight worried it might turn into a medical emergency.

In my years of assorted travel, I’ve had a long history of questionable airplane seatmates: the ninety-year-old man who touched my leg 3,781 times, then lapsed into a flatulence-fueled nap; the crying baby of all crying babies; the woman who drank too many mini bottles of rum and passed out on my shoulder, drooling.

However, on this particular flight, it seems I’ve been graced by the “Sentimental Orator.” We’d barely cleared the runway, and Chatty in seat 26B had already quoted Shakespeare, Marilyn Monroe, and, if I remember correctly, Muhammad Ali.

My tired, blank stare obviously troubles her, because the corners of her mouth plummet into a disappointed frown. “You poor child,” she says, shaking her head. “You don’t know C. S. Lewis? A shame.”

And it is. I’ve just been accused of not knowing a quote by one of my favorite authors, though I’m presently too exhausted to defend myself. But what’s sadder? The very quote itself.

“There are better things ahead than any we leave behind.”

My eyes shoot open as the plane begins to descend over London and a burst of turbulence jostles me against the Sentimental Orator who, I predict, will soon start reciting Gandhi, or maybe Mother Teresa.

The plane rattles again as it slips beneath a cloud, landing gear deployed. A moment later, we’re touching down at Heathrow with a thud.

I peer out the window. So, this is London.

The Sentimental Orator gasps and fumbles for her inhaler as I take in my first view of England and its seemingly endless gray. A thick layer of fog and dark clouds blend like a muddled watercolor painting—and my own gray mood. Gray on gray on gray.

I sigh as I collect my bag from the overhead compartment and walk numbly ahead. I’m thirty-five years old. This should be chapter thirteen of my life—maybe even chapter sixteen. But somehow, I feel as if I’ve been catapulted back to the very beginning, or worst, thrust into a laborious rewrite.

“Chapter 1: An American Divorcee in London.”

“Miss,” the Sentimental Orator says, tapping my shoulder. “I think you forgot . . . ​your book.”

She hands it to me and I eye the cover with equal parts humiliation and denial. How to Get Divorced and Not Lose Your Mind. I’d only read two chapters, as covertly as possible, but quickly lost interest and tucked it into the seat pocket for the next passenger’s guaranteed delight. I mean, what therapist in their right mind would title a chapter: “The Best Way to Get Over Someone Is to Get Under Someone”?

“You poor thing,” the Sentimental Orator says, smiling to herself.

Give this model citizen a gold star!

“Are you going through a divorce?”

Is it just me, or did she say the word “divorce” several decibels louder? The pair of women to our left look over, their faces beaming pity—for me.

I nod. “Yeah—recently.” More nearby eyes descend on me. I might as well have a sticker on my back that reads: recently divorced.

“Remember, dear,” my transatlantic seatmate says, “that it takes six months for every year you were together to get over someone.”

I’d heard this before—from other well-meaning people—but it always left me feeling confused and, well, a bit terrified. Nick and I were married for twelve years, so by those calculations, will I wallow in sadness and self-loathing for . . . ​six more? Who made up this ridiculous statistic, and can we all agree that it’s completely bogus?

It has to be, right?

I sidestep a couple in front of me to avoid the Sentimental Orator’s inevitable, forthcoming question: “Do you mind my asking . . . ​what happened?” And then I’d be backed into that awful corner, where I’m required to explain that my husband, an attorney, left me for the twenty-three-year-old paralegal he’d been secretly seeing for months. And yes, I actually believed he was working late all those nights. Her name? Oh, it’s Missy, who shows off her endless legs and fake eyelashes on Instagram.

They’re a couple now. Missy and Nicky. MadeForEachOther, or so read one of her recent posts, where she casually hinted at the new love in her life: my husband, or rather, soon-to-be ex-husband.

I feel like a zombie as I walk to the passport control area, grateful to have parted ways with the Orator. I scan my passport into a machine, and it begins flashing red and beeping. A moment later, a customs officer appears to tell me I’ve been randomly selected for further screening.

Of course I have.

“Miss, I’ll need you to come with me,” he says, leading me to a nearby room, where I hand him my passport. “Here for a holiday?”

“Uh—” I stammer as he fumbles through my bag, my underwear right on top of my jeans, and the old ratty AC/DC sweatshirt I can’t seem to part with, even if Nick did give it to me the year we first started dating. “A holiday?” I shake my head. “No.”

“Business then?” he continues, as he searches through my carry-on bag with gloved hands.

I swallow hard, deflecting his intense gaze, which feels as if it’s piercing into me. “My mother died,” I finally blurt.

A tinge of humanity appears in his eyes—only a glimmer, but it’s there. Perhaps that’s the only good thing about death—that it softens the hardest edges.

I nod as he leads me out a separate entrance, then follow the signs to baggage claim, where I collect my two large suitcases on carousel 11 and make my way outside to find a cab. I wave at a waiting driver, who’s leaning against his car, smoking a cigarette.

Now that the divorce is nearly final and the Seattle house sold, Primrose Hill will be my landing place. Still, it’s foreign to me.

Sarah Jio is the #1 international, New York Times, and USA Today bestselling author of eleven novels. She is the host of the ModAboutYou podcast and also a longtime journalist who has contributed to Glamour, The New York Times, Redbook, Real Simple, O: The Oprah Magazine, Bon Appétit, Marie Claire, Self, and many other outlets, including NPR's Morning Edition. Jio's books have been published in more than twenty-five countries. She lives in Seattle with her husband, three young boys, three stepchildren, and two puppies. 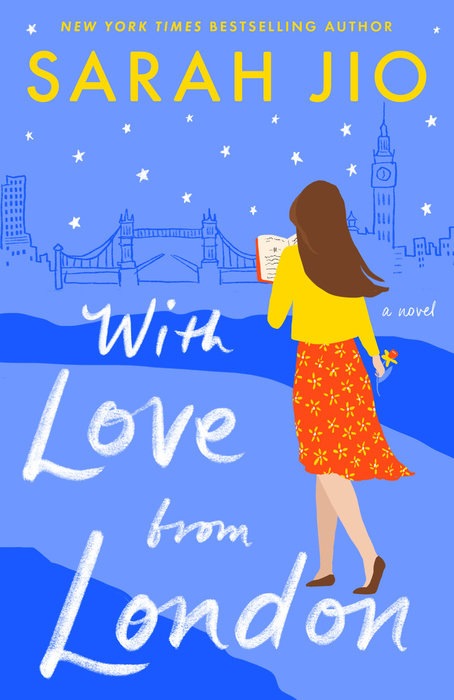