“This absorbing and important book recounts the titanic struggle over the implications of the Civil War amid the impeachment of a defiant and temperamentally erratic American president.”—Jon Meacham, Pulitzer Prize–winning author of The Soul of America

When Abraham Lincoln was assassinated and Vice-President Andrew Johnson became “the Accidental President,” it was a dangerous time in America. Congress was divided over how the Union should be reunited: when and how the secessionist South should regain full status, whether former Confederates should be punished, and when and whether black men should be given the vote. Devastated by war and resorting to violence, many white Southerners hoped to restore a pre–Civil War society, if without slavery, and the pugnacious Andrew Johnson seemed to share their goals. With the unchecked power of executive orders, Johnson ignored Congress, pardoned rebel leaders, promoted white supremacy, opposed civil rights, and called Reconstruction unnecessary. It fell to Congress to stop the American president who acted like a king.

With profound insights and making use of extensive research, Brenda Wineapple dramatically evokes this pivotal period in American history, when the country was rocked by the first-ever impeachment of a sitting American president. And she brings to vivid life the extraordinary characters who brought that impeachment forward: the willful Johnson and his retinue of advocates—including complicated men like Secretary of State William Seward—as well as the equally complicated visionaries committed to justice and equality for all, like Thaddeus Stevens, Charles Sumner, Frederick Douglass, and Ulysses S. Grant. Theirs was a last-ditch, patriotic, and Constitutional effort to render the goals of the Civil War into reality and to make the Union free, fair, and whole.

Praise for The Impeachers

“In this superbly lyrical work, Brenda Wineapple has plugged a glaring hole in our historical memory through her vivid and sweeping portrayal of President Andrew Johnson’s 1868 impeachment. She serves up not simply food for thought but a veritable feast of observations on that most trying decision for a democracy: whether to oust a sitting president. Teeming with fiery passions and unforgettable characters, The Impeachers will be devoured by contemporary readers seeking enlightenment on this issue. . . . A landmark study.”—Ron Chernow, Pulitzer Prize–winning author of Grant

An excerpt from The Impeachers

Secretary of War Edwin Stanton leaned over the bedside of his good friend, Abraham Lincoln, and, tears spilling down his cheeks, spoke the memorable phrase: now he belongs to the angels—or the ages. No one is quite sure which word, “angels” or “ages,” Stanton uttered, but each works poignantly well.

Many were likely surprised by Stanton’s sobs. And his eloquence. Most knew him as hard, implacable, and gruff. He barked out orders to his inferiors, he kept the lamps burning in the War Department all through the night, and he’d organized the Union army with precision. His long beard trailed down to the middle of his chest, as if he had no time to bother with a barber, and he took exercise by standing at his high desk for as many as fifteen hours a day. He was so devoted to the War Department, in fact, that people were likely not surprised, three years later, when Stanton assumed center stage during the impeachment controversy.

Of all people, though, President Lincoln might have understood best what motivated his secretary of war. For if Stanton had ever unburdened himself, it would have been to his chief executive. These two men—Lincoln, tall and lean and genial; Stanton, shorter, squatter, and far more volatile—were friends. Wrapped in a plaid shawl and with his hat pulled down over his forehead, during the war Lincoln would walk over to the War Department and sit in the small room next to Stanton’s office, where Lincoln kept a desk. He and Stanton waited, each of them anxious, for telegraph dispatches from the many fields of battle. Sometimes they relaxed together, occasionally driving north of the city to the leafy retreat known as the retired soldiers’ home, where the secretary of war, like Lincoln and his family, escaped from summer heat. These men truly loved each other, said Representative Henry Dawes, who knew them both.

Edwin Stanton had also shared with Lincoln grief of a more personal sort. Like Lincoln’s boy Willie, Stanton’s young son had also died in 1862. But Stanton mainly sought relief in work, and unlike Lincoln, always appeared to be on guard, shouldering sorrows that acquaintances only sometimes glimpsed. After Stanton’s father, a well-liked physician, had died suddenly in 1827, the thirteen-year-old Stanton took charge of the Steubenville, Ohio, household that included his mother, his brother, and his two sisters. He completed only one year at Kenyon College but studied law in the office of his guardian, becoming the sort of brilliant attorney on whom nothing was lost—and who left nothing to chance. He prepared cases with a meticulous, even furious, attention to detail, and he argued with aggressive often insolent vigor. He might insult a witness or a judge, or tell the opposing counsel to quit whining. A stocky, broad-shouldered man with brown, sharp eyes under steel-rimmed spectacles that he often wiped, he was not an easy person to like, and there were a great many people who did, in fact, dislike him.

As Henry Dawes would recall, Edwin Stanton was also “prone to despond.” When he was twenty-two, he married Mary Lamson, and after the burial of their firstborn daughter, Stanton disinterred the child and placed her remains in a metal box that he kept on the mantelpiece. When his wife died not long afterward—Stanton was thirty—he stopped eating and sleeping and in the night would rush from room to room, lamp in hand, crying out, “Where is Mary?” Not long after that, Stanton, learning that his brother Darwin had cut his own throat, ran to Darwin’s house, where blood was pooling on the floorboards. He then raced out into the freezing cold in such a hurry that friends, fearing for his life, coaxed him back and stayed with him until he calmed down. Stanton took responsibility for Darwin’s family but never seemed to recover. “I feel indifferent to the present, careless of the future—” he said, “in a state of bewilderment the end of which is hidden.”

Yet Stanton’s law practice was thriving. He moved to Pittsburgh, where he argued on behalf of the state of Pennsylvania before the Supreme Court to prevent a bridge from being built across the Ohio River because, Stanton claimed, it would prevent tall steamboats from traveling under it and thereby restrict interstate commerce. The case dragged on for almost a decade, and though Stanton technically lost, steamboat travel continued. Then in 1856, Stanton married Ellen Hutchison, a woman from a wealthy Pittsburgh family and Stanton’s junior by sixteen years. Though Lincoln’s secretary John Hay described her “as white and cold and motionless as marble, whose rare smiles seemed to pain her,” the marriage seems to have been happy in spite of Stanton’s working long hours—and his even longer absences.

Attorney General Jeremiah S. Black had appointed Stanton as special U.S. counsel to inspect alleged Mexican land grants in California. During his protracted stay in the West—almost a year—Stanton immediately learned Spanish to gather the documents scattered througout the state, or that were allegedly lost, and he exposed several bogus land grant deals, one of which actually claimed ownership of San Francisco. In early 1859, he returned to Washington, where he had moved his family, and built an impressive brick house, three stories high, on the north side of K Street. He was a prosperous, sought-after man in a country about to break apart.

He was also involved in legal spectacles, serving on the defense team for Daniel Sickles, the Democratic congressman from New York who had recently shot and killed District Attorney Philip Barton Key. There was no doubt as to Sickles’ guilt, but the trial was something of a circus, featuring two of Washington’s well-known political creatures, the flamboyant Sickles and the deceased Philip Key. Sickles had served as James Buchanan’s secretary when Buchanan was minister to the Court of St. James during the Franklin Pierce administration. The good-looking District Attorney Key was the son of Francis Scott Key, composer of “The Star-Spangled Banner.” He also happened to be the lover of Sickles’ wife.

Along with six other lawyers, Edwin Stanton defended Sickles before a packed Washington courtroom eager for salacious details about the affair. Sickles admitted he’d killed Key but pleaded not guilty by reason of “temporary insanity,” the first time such a plea had been offered in the United States. Sickles had to be insane, his lawyers contended; what man wouldn’t be driven crazy by his wife’s infidelity? The all-male jury voted to acquit Sickles, another triumph for Edwin Stanton.

The next year, 1860, during the last days of his presidency, James Buchanan reshuffled his cabinet and appointed Stanton as attorney general. But unlike President Buchanan, who dithered over how to handle the threat of secession, Stanton was firm. America was the only democracy in the world, Stanton asserted more than once, and he was committed to its preservation—even if that meant leaking information to Republican Senator William H. Seward about President Buchanan’s intentions toward a besieged Fort Sumter in 1860. Little wonder that among his enemies, Stanton earned a reputation as disingenuous, if not downright duplicitous.

Brenda Wineapple is the author of the award-winning Hawthorne: A Life, Genêt: A Biography of Janet Flanner, and Sister Brother: Gertrude and Leo Stein. Her essays, articles, and reviews have appeared in many publications, among them The American Scholar, The New York Times Book Review, Parnassus, Poetry, and The Nation. A Guggenheim fellow, a fellow of the American Council of Learned Societies, and twice of the National Endowment for the Humanities, she teaches in the MFA programs at Columbia University and The New School and lives in New York City. 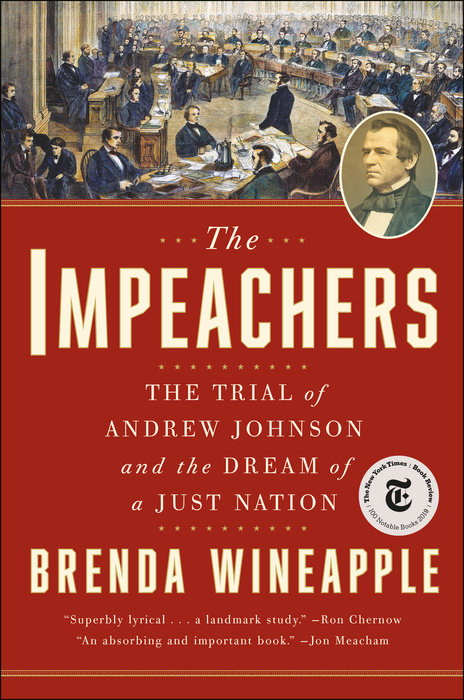