A radiant collection of letters from the renowned author of Invisible Man that trace the life and mind of a giant of American literature, with insights into the riddle of identity, the writer’s craft, and the story of a changing nation over six decades

These extensive and revealing letters span the life of Ralph Ellison and provide a remarkable window into the great writer’s life and work, his friendships, rivalries, anxieties, and all the questions about identity, art, and the American soul that bedeviled and inspired him until his death. They include early notes to his mother, written as an impoverished college student; lively exchanges with the most distinguished American writers and thinkers of his time, from Romare Bearden to Saul Bellow; and letters to friends and family from his hometown of Oklahoma City, whose influence would always be paramount.

These letters are beautifully rendered first-person accounts of Ellison’s life and work and his observations of a changing world, showing his metamorphosis from a wide-eyed student into a towering public intellectual who confronted and articulated America’s complexities.

An excerpt from The Selected Letters of Ralph Ellison

Letters from the Thirties

Ralph Ellison’s letters from the 1930s tell an affecting story of his journey from boy to man. He writes from Tuskegee, Alabama; from New York City; and, in between, from Dayton, Ohio, where, after his mother’s unexpected death, he enters the months of his young man’s moratorium, writing Richard Wright that boyhood is over.

“Geography is fate,” Ellison often said in later life, sometimes swiveling a formidable cigar between his thumb and fingers. Certainly the thirties letters show these three places shaping the emotional and psychological geography he was fated to bring to his life. Tuskegee, home to the flourishing, first-among-equals national black college in the black belt of the fiercely Jim Crow Deep South; Dayton, epitome of small-town middle America, surrounded by woods teeming with game and wild pears; New York, the country’s greatest city, with the “black metropolis” of Harlem within its borders—in different ways each place sharpened the edges of a personality that Ellison associated with the territory in which he was born and bred: the southwestern part of Oklahoma, in particular Oklahoma City.

The young Ralph Ellison who arrived at Tuskegee was a homeboy just leaving home. Still a kid, he was savvy and street-smart about some things, naive about others, especially the false masks and true faces of power. Of the more than fifty letters he wrote from Tuskegee, all but six were to his mother, Ida Bell. (Four were to his younger brother, Herbert, whom Ralph affectionately calls “Huck,” and instructs to “watch your tenses and endings, don’t write fool when you mean fooling or fooled”; one was to his stepfather, John Bell, referred to as “Mister John” or “Mr. Bell,” whom he praises as a generous, much “above the average stepfather”; and a long letter was to Vivian Steveson, his old flame from Oklahoma City.)

“Dear Mama,” he writes his first day at Tuskegee, a salutation that for the next three years alternates only with “Dearest Mama.” His sign-offs on the numerous letters to his mother are not so uniform. They seem to vary according to his shifting sense of self at the moment he is writing. “Your Hobo Son, Ralph W. Ellison,” he wittily signs that first letter. Other sign-offs over the years include “Your son” (multiple times), “Till next time,” “Ralph,” “Your son Ralph,” “Your son Ralph W. Ellison,” “As ever,” “Yours as ever,” more and more often “With love” or “Love,” and, on one occasion, “Be good.”

His first letter contains a list of fourteen items he needs ASAP and unpaid bills he wants his mother to pay in Oklahoma City. There is plenty of rushed chatter, but he does not mention the deep gash he received just above his eye fleeing railroad bulls in Decatur, Alabama, on the last leg of his journey to Tuskegee. That omission belies the frankness that usually marks Ellison’s letters to his mother. For three years at Tuskegee he writes her about his mundane activities; his joys and sorrows, intense and fleeting; his adventures and needs, financial and emotional; and his gradual awareness, in the process of becoming a young man, of the unforgiving nature of the world. He writes with enviable ease about all facets of his life, holding back little, as if writing his mama was a way of keeping faith with himself, especially his feelings.

Not far beneath the conventions of Ralph’s mother-son relationship there is often the strong feel of a steady, abiding friendship. Always his mother, Mama is also a friend-in-trust with whom young Ellison is comfortable—or, if not always comfortable, at least determined to share the flow of his life.

Ralph’s lot at Tuskegee was a difficult one. “You know I travel with the richer gang here and this clothes problem is a pain,” he writes with a larger dash of self-pity than perhaps he realizes. At the same time that he sympathizes with the on-and-off employment and hand-to-mouth existence of his mother and stepfather in the Oklahoma City of the Depression, his letters home are full of appeals for money. He asks for as much as “Mama” and “Mister John” can spare for his band uniform, black drill shoes, winter coat, and other incidental needs and small pleasures: “I have no razor blades, no soap, no haircut, no toothpaste, no anything. I wish you would send as many of these as possible as soon as possible. You could send a box, and you could cook a cake? and send a few sardines etc.”

Reminders of the amount and due date of Tuskegee’s numerous fees and charges usually accompany Ralph’s list of personal needs. Yet, sensing his sacrificing mother’s “Ellison pride,” he also includes details of his activities, accomplishments, and musical performances, especially his occasional solos, ready-made for her to share with family and friends back in Oklahoma City—those he calls “dear folks” in letters and knows are rooting for him to succeed as their native son.

However, what stands out more than eighty years later is Ellison’s candor with his mother about the deeper currents merging with the flow of his ordinary life. Writing to her, he shares his personality along with the point of view he is developing toward the world around him.

Consider his chilling, yet not sensationalized account of brazen, repeated efforts by the Tuskegee registrar and dean of men to compel him to trade sexual favors in exchange for official permission to be away from campus for a week in the summer. “This is just some more of the mess I’ve mentioned before,” he writes his mother in August 1934. “The person trying to study should not be worried and nagged at because he does not consent to prostitute himself.”

Though Ida Bell’s response to her son is not explicit, Ralph’s comments imply she has understood him and he has been comforted by her quiet support for his refusal to accept the abusive conditions imposed on him, even if the consequences are forfeiting privileges that are his due as a Tuskegee student and free person. Other accounts of how power works in the world, written to his mother from Tuskegee and later from New York, foreshadow his “On Being the Target of Discrimination.” Written and published in 1989, this memoir/essay is a riveting, witty account of how in the years after his father’s death, when he was three and his brother Herbert a mere six or seven weeks old, their mother fought Jim Crow by schooling her boys in the power of little conspiracies to resist segregation by pretending to accept its values and conditions.

His letters to his mother also display a disarming honesty and directness about how Ellison sees the young women at Tuskegee. Though not graphic, his observations leave no doubt that, for him, sexual activity is necessary, normal, and healthy. His nonchalance makes clear he feels no need to conceal or evade his experience for fear of his mother’s disapproval.

In the last letter he wrote from Tuskegee in June 1936, he refuses to fudge his diminishing romantic interest in his former Oklahoma City girlfriend, Vivian Steveson, whom his mother continues to regard with favor. “You seem to feel that I miss her. This is a nice romantic way to have things happen: but in this case it’s hardly true to life. There are two or three others who have come my way since she did and I must confess that I miss either of them much more than I ever did miss Vivian, and I would much rather see anyone of them any day than that little lady. You must understand Mama that I don’t feel just as you do about things.”

Other letters are memorable for touching, sometimes amusing, expressions of Ellison’s love for his mother. He closes an upbeat, chatty Christmas letter of 1934 with a play on the nickname he bristled at hearing white men use to her face as a small boy. “Be a good Brownie,” he tells her, tongue in cheek, “and write soon.” And in March 1935, he brags of showing close friends Walter Williams and Hazel Harrison a charming photograph just received from Ida. “The picture,” he writes her, “is the most appreciated thing you have sent since I’ve been here . . . and when you looked up at me from the frame—well I felt very strange, it was the next best thing to seeing you.” 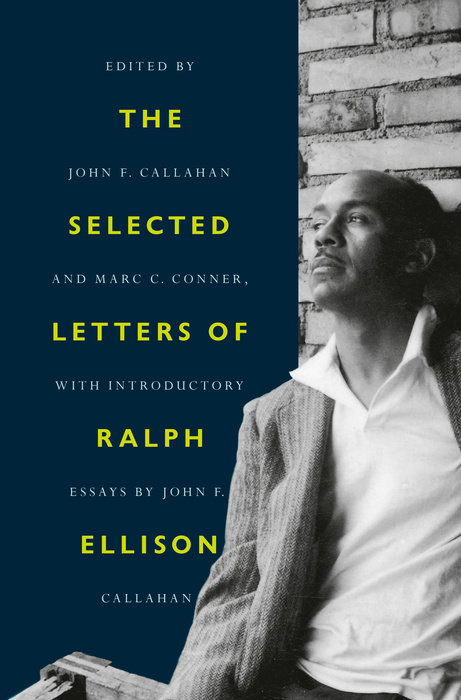