A Brothers of Mayhem Novel

Sizzling with passion and suspense, perfect for fans of Joanna Wylde and Julie Ann Walker, the Brothers of Mayhem series revs up as a headstrong beauty faces off against an outlaw motorcycle club—and falls for the bad boy she never saw coming.

Cassidy Ryder refuses to be intimidated by anyone, even the hell-raising, hard-drinking Brothers of Mayhem. The daughter of their former president, she’s not above smashing a few heads to keep her teenage brother safe. But when Cassidy’s big mouth gets her in trouble, the only thing that saves her is some quick thinking from the Brothers’ bartender. He’s commanding and strong, and as smooth as the whiskey he pours: the ultimate temptation for a girl who swore she’d never be a biker’s plaything.

But Thorn Savalas is no ordinary biker. He’s a cop, and he’s worked too hard earning the Brothers’ trust to blow his cover over a female—even one who rocks a pair of jeans like Cassidy. The only way to protect her is by claiming she’s his old lady. Trouble is, Thorn can’t just pretend. He wants Cassidy, and every scorching touch tells him she feels the same. But acting on their hottest fantasies could leave them both exposed . . . even if nothing else has ever felt so real.

“This savage contemporary is filled with action, deception, and emotional and sexual tension that leave readers panting right up until the highly anticipated climax.”—Publishers Weekly

“There is plenty in the way of fast bikes, leather, and inside details into the culture of this MC to keep readers invested in the romance.”—Library Journal

“A new take on [MC romance with] characters you root for, a villain you can’t help but hate, scenes that leave you wondering what else could possibly happen next, and characters you want to know more about in the future books in the series.”—Once Untold

“This one is spicy, with several detailed and well-paced sex scenes. . . . I loved the romance between Cassidy and Thorn.”—The Romance Factor

“Irresistible . . . Carla Swafford did a wonderful job creating every single one of the characters. . . . I enjoyed . . . Hidden Heat immensely and I can’t wait for the next book of the series.”—Collector of Book Boyfriends & Girlfriends

“The story was very captivating. It held my attention from the very beginning until the very end.”—Itsy Bitsy Book Bits

“If you enjoy Motorcycle Club Romance, then pick up Hidden Heat. . . . It’s a good solid story, and one I would recommend to anyone who enjoys this genre.”—Keeper Bookshelf

“A different perspective into the MC lifestyle that offered a nice change from the norm.”—Life with Two Boys

“I recommend this book if you want strong characters, heat, suspense, and an interesting story.”—Stephanie’s Book Reports

“If you’re a fan of MC romance, you’ve got to read Hidden Heat.”—Unwrapping Romance

Carla Swafford loves romance novels, action/adventure movies, and men, and her books reflect that. She’s married to her high school sweetheart and lives in Alabama.

A Brothers of Mayhem Novel 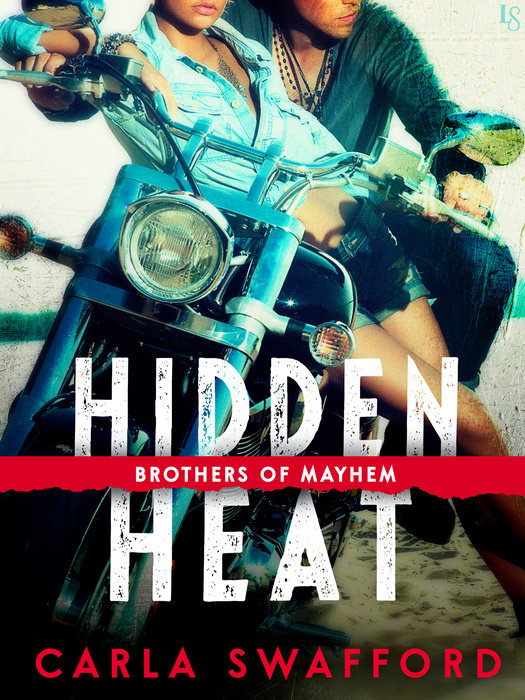