A Murder, a Private Investigator, and Her Search for Justice

EDGAR AWARD FINALIST • A private investigator revisits the case that has haunted her for decades and sets out on a deeply personal quest to sort truth from lies.

CLUE AWARD FINALIST • “[A] haunting memoir, which also unfolds as a gripping true-crime narrative . . . This is a powerful, unsettling story, told with bracing honesty and skill.”—The Washington Post

Decades later, McGarrahan, now a successful private investigator, is still gripped by the mystery and infamy of the Tafero case, and decides she must investigate it herself. Her quest will take her around the world and deep into the harrowing heart of obsession, and as questions of guilt and innocence become more complex, McGarrahan discovers she is not alone in her need for closure. For whenever a human life is taken by violence, the reckoning is long and difficult for all.

A rare and vivid account of a private investigator’s real life and a classic true-crime tale, Two Truths and a Lie is ultimately a profound meditation on truth, grief, complicity, and justice.

An excerpt from Two Truths and a Lie

Fort Lauderdale, Florida. January 2015. A dead-­end street beneath a power plant, just west of downtown. Except for the metallic buzzing sound in the air around me, the day is empty and dusty and bright. I am standing in the middle of the street, listening to the power plant and staring at an apartment building. Single-­story, chipped stucco, asphalt for a front yard. I’ve got an old newspaper clipping with me from the days immediately after the murders—­“Witness Testifies Tafero Didn’t Shoot”—­and I dig it out now to double-­check the address.

In the winter of 1976, Walter Rhodes lived in this building. In Apartment B, up on the right, second door in from the street. One afternoon around Valentine’s Day, just after Taxi Driver hit the movie theaters and as heiress Patty Hearst was standing trial for bank robbery out in California, Walter took a call in Apartment B from his friend Jesse Tafero. Jesse asked if he could come crash with his girlfriend and kids for a few days. Walter said okay. And on about their third day here together, Walter and Jesse and Sunny and the children came out of Apartment B, down this cement walkway, climbed into a red Ford Fairlane, and drove off. For Jesse Tafero, that trip ended in the electric chair.

There are some things I need to make clear, here at the outset. I’m a licensed private detective but I don’t carry a gun. I’ve never slapped a witness or slept with one, although there’ve been some who deserved it and a few who tried it. All my life I’ve been mistaken for someone else—­Don’t I know you? Haven’t we met?—­and what people assume about me is usually wrong. I’m not going to lie: That used to piss me off. Once when I was a newspaper reporter, the press secretary to the governor of Florida asked me who I’d slept with to get my job. I wrote a whole newspaper column about how sexist and outrageous and unacceptably ubiquitous his attitude was. But not long into my new life as a detective I realized all that bullshit was now working in my favor. Being underestimated, talked over, talked down to, ignored, pitied, patronized, flirted with, hit on—­all super­powers, to a professional investigator. No wonder women make good private eyes. For nearly twenty years now, I’ve earned my living by speaking to strangers, but in my own life I’m shy. And I don’t know how I feel right now, standing here, except that I cannot believe it is real.

Four days ago, after I finally got up my nerve to do this, my husband and I shuttered our house up north, threw some clothes in the car, and headed off into a blizzard so fierce it took five hours to drive fifty miles. Trucks skidding off into drifts in Michigan, snow blowing across the road in Indiana, rain pounding down in the mountains of Tennessee. All the way along, I tried not to think about what I was getting myself into, but the electric chair flickered in the back of my mind. Now I’m in South Florida for the first time in a quarter century, standing on this street, looking at this building, and feeling—­nothing. It’s weird. Nothing at all.

Up at Apartment B, there’s a doorbell, an aluminum threshold, and a window so dirty I can’t see inside. I stand still for a moment, staring at a pile of cigarette butts on the ground. It’s not that I’m expecting to trip over a bullet here and solve the case. But this threshold is the threshold Jesse and Sunny and Walter crossed, setting off. This roof is the last roof Jesse Tafero slept under as a free man. An investigation has to start somewhere, and I like to touch base. It’s a form of superstition, possibly. The hope that the past will be present in a place.

And I don’t have any other clues. This building. Some old newspaper clippings. A few court records. Seriously. That’s it. With those as my starting point, I have to find the truth about two heartless murders committed almost forty years ago on the side of an interstate highway in a rest area that has long since been completely torn down. Obliterated. Erased.

Detective work is, in its essence, a form of time travel. It’s being in two places at once—­now, and then. Now being me, with all my fears and flaws. Then being the split seconds those shots rang out in the rest area. That is the instant I need to get back to. To own my life again. That.

I raise my hand. I knock.

But no luck. There’s no sound. No one’s around.

At the Fort Lauderdale courthouse the next day, I write the names Jesse Joseph Tafero, Sonia Jacobs Linder, and Walter Norman Rhodes Jr. on a piece of scrap paper and slide it to the clerk who sits behind a pane of bulletproof glass. It’s a gorgeous day today—­I drove along the Atlantic Ocean on my way here, cobalt waves beneath a clear blue sky—­but this office is windowless with overhead lights that buzz and snap. I hate the buzzing. I’ve spent the morning calling my clients to tell them I’m taking some time off. I don’t say why. Nobody wants a haunted detective. I’ve given myself three months here in Florida, from now until the end of March, to figure this case out. It’s day two and already I feel like I’m running behind.

Now the clerk is coming toward me with a stack of boxes on a cart. Broward County’s official court file for case number 76-­127SCF, State of Florida v. Tafero et al. The case is thirty-­nine years old and the boxes look alarming. Onionskin documents, faint purple mimeographs from the 1970s, mold on the pages, staples rusted in place. But somewhere in this mess are the undisputed facts of this mystery, the facts that have always been accepted by everyone as true. Every case has them, even this one. I reach into the box, take a file folder, and begin.

February 20, 1976. A Friday morning, about seven o’clock. In a rest area off Interstate 95, a beat-­up green two-­door Camaro is parked tight alongside a grassy curb. The car’s windows are cracked open, its hood is bashed and rusted, the door on its passenger side is jammed shut, its front bumper is falling off. The sun is up but the day is foggy and the rest area is covered in white mist.

Over in the front passenger seat: Jesse Tafero. Jesse is asleep too. He’s wearing a tan leather jacket, a dress shirt, tan slacks, and white slip-­on shoes. He has wavy brown hair, a mustache, thick muttonchop sideburns, and a dark beard. Around his neck, on his smooth bare chest, he wears a green-­and-­gold Buddha on a chain.

Jesse’s girlfriend, Sunny Jacobs, is in the backseat, also asleep. Sunny is delicately built, five feet tall and one hundred pounds, with wide brown eyes and long hair. She’s got on a green pullover sweater, loose on her thin shoulders, and bell-­bottom jeans. With to her are two sleeping children: nine-­year-­old Eric and baby Tina, ten months. A denim bag with pink baby pajamas is at Sunny’s feet.

Just past seven o’clock, a marked Florida Highway Patrol cruiser pulls in off Interstate 95, Trooper Phillip Black at the wheel. Trooper Black is starting his shift this morning with a routine patrol of the highway rest areas. Waking people up, checking they’re okay: He’s told friends that he considers it one of the basic duties of his job. Black is tall and fit, with short brown hair and a square jaw; clean-­cut, friendly, helpful, and popular, he’s a central-­casting version of a handsome state trooper. He’s also a former United States Marine who picks up his young son from school after his shift ends and stays a moment to help tidy up the classroom too. Today he’s wearing his Florida Highway Patrol uniform: light brown shirt and trousers, black epaulets, belt, and shoes, a cream Stetson hat. Black has a fully loaded .357 Magnum service revolver strapped in a holster at his waist. And this morning, Black has a friend riding along.

Donald Irwin is a Canadian constable who, along with his wife, has been spending the week as a guest of the Black family. Both officers are white, thirty-­nine years old, and married with children. It’s the last day of Irwin’s Florida vacation; tomorrow he and his wife are heading home to the Ontario cold. As a ride-­along, Irwin is here as an observer with no official police powers, so he is dressed in civilian clothes: a white knit T-­shirt, gray Levi’s, brown shoes. He’s wearing gold-­framed aviator eyeglasses. He is unarmed. Irwin has been a police officer in Canada since 1958, and in those eighteen years, he has never once fired a weapon in the line of duty or come face-­to-­face with a gunman.

In his cruiser, Black pulls alongside the Camaro. The two cars are side by side now, with the cruiser on the left. Black parks, and he and Irwin step out into the morning mist. As Irwin hangs back, Black walks over to the Camaro. Two young children, asleep in the backseat. A fragile-­looking young woman, sleeping with them. Walter, asleep in the driver’s seat. There’s a handgun at Walter’s feet. A Smith & Wesson 9mm semiautomatic, black steel with a wood grip.

Trooper Black reaches into the Camaro and takes the gun.

That wakes everybody up.

Ellen McGarrahan earned a degree in history from Yale and worked as an investigative reporter at newspapers in New York City, Boston, Miami and San Francisco before accidentally finding her calling as a private detective. For two decades her investigations agency has specialized in complex civil and criminal cases ranging from corporate whistleblowing to capital murder. Two Truths and a Lie is her first book.

A Murder, a Private Investigator, and Her Search for Justice 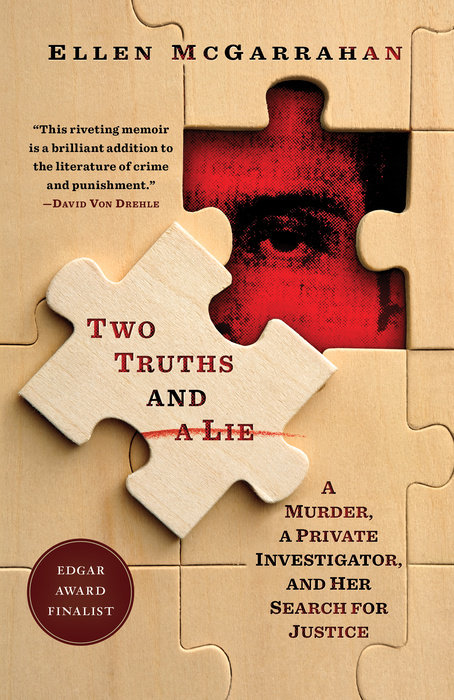