#1 NEW YORK TIMES BESTSELLER • An eye-opening, no-holds-barred memoir about life in the Church of Scientology, now with a new afterword by the author—the outspoken actress and star of the A&E docuseries Leah Remini: Scientology and the Aftermath

Leah Remini has never been the type to hold her tongue. That willingness to speak her mind, stand her ground, and rattle the occasional cage has enabled this tough-talking girl from Brooklyn to forge an enduring and successful career in Hollywood. But being a troublemaker has come at a cost.

That was never more evident than in 2013, when Remini loudly and publicly broke with the Church of Scientology. Now, in this frank, funny, poignant memoir, the former King of Queens star opens up about that experience for the first time, revealing the in-depth details of her painful split with the church and its controversial practices.

Indoctrinated into the church as a child while living with her mother and sister in New York, Remini eventually moved to Los Angeles, where her dreams of becoming an actress and advancing Scientology’s causes grew increasingly intertwined. As an adult, she found the success she’d worked so hard for, and with it a prominent place in the hierarchy of celebrity Scientologists alongside people such as Tom Cruise, Scientology’s most high-profile adherent. Remini spent time directly with Cruise and was included among the guests at his 2006 wedding to Katie Holmes.

But when she began to raise questions about some of the church’s actions, she found herself a target. In the end, she was declared by the church to be a threat to their organization and therefore a “Suppressive Person,” and as a result, all of her fellow parishioners—including members of her own family—were told to disconnect from her. Forever.

Bold, brash, and bravely confessional, Troublemaker chronicles Leah Remini’s remarkable journey toward emotional and spiritual freedom, both for herself and for her family. This is a memoir designed to reveal the hard-won truths of a life lived honestly—from an author unafraid of the consequences.

“An aggressively honest memoir . . . Troublemaker is the most raw and revealing Scientology memoir to date.”—Entertainment Weekly

“Leah’s story is a juicy, inside-Hollywood read, but it’s more than that. It’s a moving story about the value of questioning authority and how one woman survived a profound crisis of faith.”—People

An excerpt from Troublemaker

AS FAR BACK AS I can remember, I was always performing and trying to make people laugh. I grew up on I Love Lucy, Welcome Back, Kotter, Happy Days, Gilligan’s Island, Three’s Company, Sanford and Son, All in the Family, Good Times…You get the idea. Watching all of these shows always made me feel something. I knew early on that I wanted to make people feel this same way.

As a kid I was always putting on shows—re-creating skits from The Carol Burnett Show and singing Donny and Marie songs in the living room. My older sister, Nicole, reluctantly played my sidekick; although she never had any enthusiasm for these skits and performances, she obliged. I also took to giving her notes like “Nic, Donny loves Marie, so when we do ‘I’m a Little Bit Country,’ you gotta look at me like he looks at Marie, with a smile and maybe a wink.” She would respond with “Or how about I just punch you in the face?” Okay, we all make choices as performers.

WHEN I WAS NINE YEARS old, I heard that the Broadway musical Annie was holding open auditions for the lead role. I didn’t let the fact that I had no singing talent or acting experience deter me. My mom supported me, believing that I would one day be an actress, and she got a playwright friend to teach me the song “Tomorrow” and take me to the group audition. Her boyfriend at the time photographed me for my “headshots,” in which I wore my very best Little House on the Prairie shirt. When I got the pictures back, I was seriously floored at how beautiful I looked. Clearly, the Annie people would see this little gem from Brooklyn and want to hire me on the spot—but I was still willing to sing for them if need be.

The audition was a cattle call, which meant everyone was assigned a number and sat in the audience section of a huge theater until that number was called. The image running through my mind was that of a front-page headline in the New York Post: “Brooklyn Girl with No Experience Nabs Annie Role.” Whatever I lacked in terms of dancing or singing, someone could teach me. I had the chutzpah to land the part. And as for my long, straight brown hair—well, that’s what wigs were for. And with that, I was off to hand the director my picture.

But as soon as my name was called and I got onstage, facing the director and all those people sitting in the darkened theater, I went blind with panic.

The pianist hit a key and I started to sing immediately. “The—”

“No. That’s for the key,” the director interrupted.

“Okay. Well, maybe you should tell people…Do you want me to start again?” I said.

“That’s okay. Go home to Mommy,” the director said as he looked down at his clipboard.

I burst into tears before I had even gotten off the stage. I was crying the way kids do when they can’t catch their breath. My mom’s friend, the one who taught me the song, who had brought me to the audition, took me for a slice of pizza and an Italian ice, over which we discussed how that director would regret not hiring me and how Annie would bomb without me. The Broadway show Annie would suffer and suffer big without me in it!


WHEN I WASN’T ACTING OUT my favorite TV shows, Nicole and I could be found hanging out on Eighty-sixth Street, near Bay Parkway, where loud music thumped from the cars to get girls’ attention, even though the guys in their gold chains, Old Spice, and gelled hair acted like they were too cool to care. I aspired to be one of those girls whose attention the guys sought—tight Jordache and Sergio Valente jeans with a brush jammed in the back pocket, lots of makeup and Aqua Net, and even more attitude. All they ever seemed to do was hang out on the corner—like a hooker, but not—and I wanted in. I vowed that when I was older—maybe twelve or thirteen—I would be just like them.

This was Bensonhurst, Brooklyn, circa 1980. We talked tough, but ultimately it was a protective neighborhood for those who belonged. When a car alarm went off, there would be five Joeys and Frankies out on the street with bats within two minutes. There was no such thing as minding your own business. If a boyfriend was fighting with his girlfriend, another guy would start yelling at him: “Yo, don’t fuckin’ talk to a girl like that.” ’Nuff said.

When we were kids, our neighborhood—basically consisting of a bakery, a pizzeria, a bagel store, a Baskin-Robbins, a Chock full o’Nuts, a Te-Amo, and an Optima—was our whole universe.

While Manhattan, just a quick train ride away, was foreign to Nicole and me, places like Long Island and New Jersey were another planet. When our mom took us to the Poconos for vacation (a rarity), we met a group of girls who asked us if we wanted to help “collect things for a collage.” First we had to clear up what a collage was, because my sister and I didn’t speak French. When it rained, these kids stayed inside and played Atari, unlike us Brooklyn kids, who were used to hanging out in front of the candy store come rain, sleet, or mini-hurricane.

Our regular neighborhood haunt was the local Te-Amo convenience store, near the D train. We could also be found at other people’s houses, where it seemed there were always better toys and better food than at ours. I spent a lot of time at my friend’s place above our apartment on Bay Parkway. She had a Barbie Dreamhouse, which back then, to little girls, was pretty much the equivalent of crack. That’s where I was playing one day when my mom called Nicole and me down to share some news.

“I’ve got to tell you girls something,” Mom said. “Your dad and I are separating. I don’t want you to be upset. I’m okay, and we’re going to be okay.”

I sat there basically without expression and looked at my sister, wondering if I should try to fake being more upset.

George, my dad, was the classic paesan of Sicilian origin who used hairspray on his remaining three hairs, wore a rope chain and pinky ring, got his nails done, and kept his car—a Cadillac, of course—perfectly clean and smelling good with one of those scented trees that hang from the rearview mirror. And I was scared shitless of the man.

He never hit me. (Nicole, on the other hand, would get smacked. “You are older. You should know better,” he used to say to my sister, as if she were going to college already, though she was just a year older than me.) What terrified me was the way my dad could annihilate you when he spoke, throwing around words like “idiot,” “retard,” “moron” at the drop of a hat.

One time when we were little and pretending to make soup in the bathroom sink out of his Old Spice, Contac cold capsules, and most of the other contents of the medicine cabinet, I saw my dad at the end of the hallway. When he asked, “What the fuck are you’s doing?” I got hot all over and couldn’t say a word. After Nicole answered, “We are making a soup,” he spanked her. For some reason I always laughed when my sister got hit. I’m sure it was a defense against more complicated emotions. Or I was just evil as a kid and liked her getting hit.

He was only raising us the way he had been raised, but anytime he was around, I was tense—even when he was trying to be kind. For example, one time when I came to the dinner table, I found a paper bag on my chair, so I didn’t sit down.

“What are you going to do, stand there?” he asked, looking at me.

I didn’t want to say the wrong thing, so I didn’t say anything.

Thinking this was some kind of a trick, I nervously picked up the bag and opened it. Inside was a doll. By the time I realized what it was, however, I was so wound up that I had started to cry.

“What’s with you?” Dad started yelling. “Someone tries to give you a gift and you’re crying?”

I couldn’t catch my breath to explain.

I remember once when I carelessly shoved a box of cookies into the kitchen cabinet. My dad walked by, saw what I was doing, and said, “What kind of fucking animal puts cookies back this way?!” He grabbed the box and threw the cookies across the room.

REBECCA PALEY is the bestselling coauthor of several memoirs. 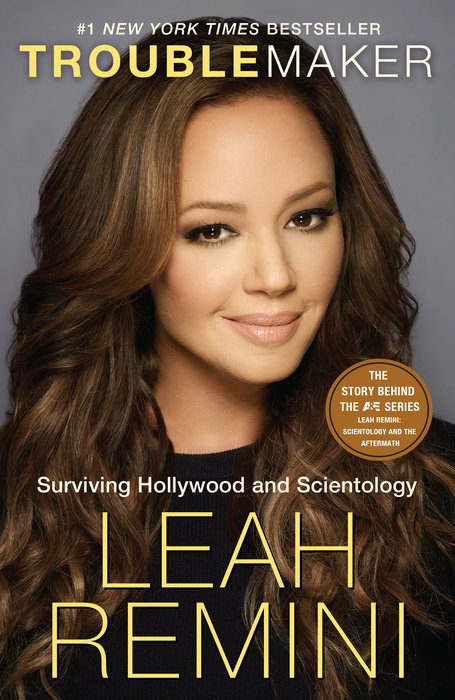