In this intense and intimate family portrait that moves at a thriller’s pace, a troubled woman faces a gripping moral dilemma after rescuing two abandoned children from a hurricane.

On the outskirts of North Carolina’s Outer Banks sits the Paradise, an apartment complex where renters never stay long enough to call the place “home”—and neighbors are seldom neighborly. It’s ideal for Sara Lennox, who moved there to escape a complicated past—and even her name—and rebuild a new life for herself under the radar. But Sara cannot help but notice the family next door, especially twelve-year-old Cassie and five-year-old Boon. She hears rumors and whispers of a recent tragedy slowly tearing them apart.

When a raging storm threatens then slams the coastal community, Sara makes a quick, bold decision: Rescue Cassie and Boon from the storm and their broken home—without telling a soul. But this seemingly noble act is not without consequences. Some lethal.

Praise for The Liar’s Child

“Surprising and rewarding . . . Ms. Buckley does what only the best suspense writers can do: She makes you care about what happens to her characters, provoking your emotions as well as your curiosity.”—The Wall Street Journal

“Buckley has crafted a complex and compelling story. The nuances and dynamics at play in The Liar’s Child will take the most jaded reader on a heartfelt and emotional journey.”—Associated Press

“A wonderfully complex and multilayered drama complete with the suspense that keeps the pages turning. Fans of Kate White and Diane Chamberlain will be asking if it’s possible for a child to leave the past behind long after the book ends.”—Booklist

“Carla Buckley’s superb psychological thrillers are always emotionally wrenching but The Liar’s Child packs a visceral gut punch that knocks the wind right out of us . . . Emotive writing that packs a wallop to both the heart and the mind.”—Book Trib

An excerpt from The Liar's Child

They’d assigned her a man and a woman—the woman was there to accompany Sara into the restrooms and motel rooms along the trip from St. Paul to the Outer Banks, places where the man couldn’t go. Nicole, her name was. His was Luis. Or so they said. Sara didn’t care. She’d been playing this game longer than they had.

They rode in a dark sedan with tinted windows. They followed a circuitous route, driving west, then south, and finally east, stopping along the way in small towns to change vehicles—pulling into an empty parking lot, Luis getting out rst to walk around and check the new car, shining a light beneath the undercarriage and passing a hand- held device along the dashboard before Nicole would let Sara climb out of one backseat and into the next. e vehicles were exactly alike, the differences among them being the way each smelled. The first had reeked of popcorn, and the second, a sharp pine scent. is one, stale coffee.

When they stopped for the night, Nicole would check out the motel room while Luis waited in the car with Sara. Then Nicole would wave Sara out of the car and inside the room, closing the door quickly behind them and sliding the chain. Then it was lights-out—no TV, no reading, no chitchat. Sara was skilled at getting people to talk about themselves, but she didn’t even try with these two. What was the point?

Where have you always wanted to live? the Director had asked, back at the beginning, when they first started talking about using her instead of prosecuting her. California, Sara said, instantly, maybe Seattle. They picked North Carolina. e Outer Banks was filled with vacationers who came and went, they explained, and permanent residents who wanted to keep to themselves. No one would pay Sara the least bit of attention. As long as she kept her head down, she’d be okay.

It had been a long journey conducted mostly in silence, leaving behind sleety avenues and overcast skies before winding through serrated mountains and emerging into a land transformed by greenery and flowers. When at last they drove onto the long, narrow bridge soaring over the ocean, Nicole rolled down the windows. “Smell that air.”
Sara said nothing. It wasn’t California or Seattle.

The Outer Banks was a strip of land hanging out in the Atlantic, accessible only by bridges at the northern and southern tips, studded with magnolia trees and palms. Signs bristled. Peaches, barbecue, fresh boiled peanuts. Churches and Brazilian waxes.

Luis slowed the sedan and flicked on the turn signal. Sara glanced at the strip mall opposite, the faded placards taped to shop windows. This was an area in transition, though whether it was trending up or down, she couldn’t tell. She’d usually spent her time in neighborhoods that had already decided.

They bumped into a courtyard. The Paradise, the sign said. It didn’t look like paradise. The grubby building in front of her rose four bleak stories connected by stark concrete walkways. e roof was patched. Beach towels sagged over railings; miniblinds dangled over every window. The parked cars were older models with sagging bumpers and decaying panels. The only thing running in the stone fountain were rivulets of rust beneath the spigots. Three teenage boys and a girl stopped to let them drive past, all four dressed in black. Making a statement. Clueless, Sara thought.

Luis braked to a stop. “This is it?” Sara couldn’t keep the horror out of her voice.

Luis glanced back at her. Of the two, he’d turned out to be the friendly one. He and Nicole had probably flipped a coin, deciding who would play good cop. “It’s on the ocean.”

Maybe he was afraid she’d refuse to get out of the car. The Paradise was a full block from the ocean, a line of private residences standing between it and the water. She could hear the ocean and smell it, but she couldn’t see it.

Sara got out to talk to the building manager. Luis and Nicole waited in the car. Inside, a circulating fan beat the humid air. The guy behind the counter glanced up. Bald, fat, sweat prickling his upper lip. “Help you?”

“I’m here about an apartment.”

She didn’t even stumble. “Sara Lennox.” It was her first time using it.

Carla Buckley is the author of The Good Goodbye, The Deepest Secret, Invisible, and The Things That Keep Us Here, which was nominated for a Thriller Award as a best first novel and the Ohioana Book Award for fiction. She is a graduate of Oberlin College and the Wharton School of Business, and lives in Chapel Hill, North Carolina, with her husband and three children. She is currently at work on her next novel. 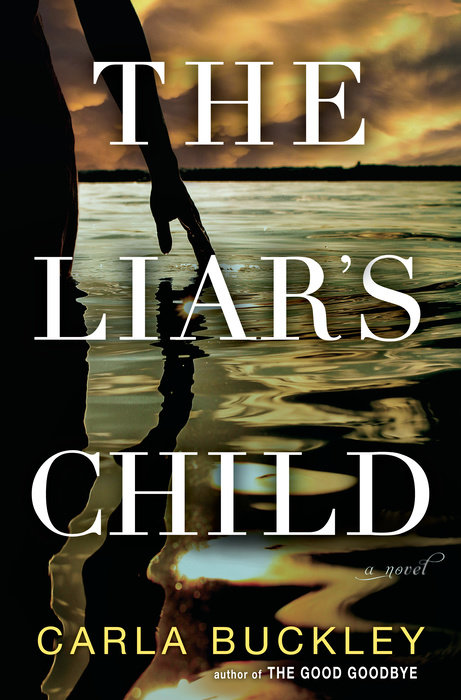