150+ Delicious Recipes to Flatten Your Belly, Turn Off Your Fat Genes, and Help Keep You Lean for Life!

Based on Zero Belly Diet, the revolutionary bestselling weight-loss plan from NBC News health and wellness contributor David Zinczenko, creator of Eat This, Not That!, Zero Belly Cookbook is a groundbreaking collection of recipes that will teach anyone how to cook beautifully, lose weight fast, and get healthier in just minutes a day.

SEE THE DELICIOUS DIFFERENCE IN JUST FOURTEEN DAYS! Strip away up to 16 pounds in two weeks with the weight-loss power of gourmet superfoods.

Ever since the arrival of David Zinczenko’s bestselling Zero Belly Diet—with its proven formula to rev up metabolism, melt away fat, and turn off the genes that cause weight gain—fans have been clamoring for more scrumptious, waist-slimming recipes to add to their weekly menus. Zinczenko answers the call in Zero Belly Cookbook—a collection of more than 150 quick, simple, restaurant-quality meals that will improve how you eat, feel, and live.

Including tasty dishes from such celebrated chefs as Jason Lawless, Susan Feniger, Chris Jaeckle, and Anita Lo, these tantalizing, easy-to-prepare recipes are specifically designed to target the fat that matters most to your health: belly fat. Regardless of your health history, your lifestyle, or even your genes, Zero Belly Cookbook will give you the power to flatten your belly, heal your body, soothe your soul, and live better than ever.

An excerpt from Zero Belly Cookbook

Sometimes you start out to write a book, and you accidentally start a revolution.

Within just weeks after the publication of Zero Belly Diet, a spontaneous support group, Zero Belly Way of Life, sprung up on Facebook, with readers swapping recipes, sharing tips, and describing their experiences as they watched stubborn pounds suddenly fall away, effortlessly. In fact, readers have become my best advertisers, sharing word of mouth about how effective Zero Belly is. They’ve just had one consistent request:

Can we have more recipes, please?

This cookbook is a delicious answer to those tens of thousands of clamoring fans who want to take Zero Belly to the next level. Zero Belly—like the Facebook group says—isn’t a diet. It’s a way of life. And the more seamlessly you can incorporate its principles into your day-to-day routine, the greater the health gains and weight loss you’ll experience.

If you’re not already a fan of Zero Belly, this chapter will give you some background into the program: how it works and, more interesting, why it works. Even if you don’t care much for science (hey, I’m here to get some awesome recipes!), you’ll find this little recap pretty cool, because it explains why simply tweaking the way in which we eat can change everything about our bodies and our lives. (And I bet the Slow-Cooked Beef Stew on page 149 is going to taste that much more delicious when you know just how many great things it’s doing for your body.)

Ask anyone what the key principles of weight loss are, and they’ll probably come back with something like “hunger, sweat, and misery.” Between the toothy TV trainers who want to take you to boot camp and the supplement companies who want to sell you “fat-burners” and the diet food makers who’ve packaged up low-fat, low-carb, low-cal, low-fun frozen misery meals, it’s no wonder that dropping pounds seems like it has to be ugly and onerous.

But that’s because most weight-loss plans are based on the erroneous idea that cutting calories is the way to strip off pounds. Or that cutting fat, or carbs, or meat, is the golden path. Or that pounding away at the treadmill or the stationary rower is the way to go. And all of those approaches will work, to a certain extent. But each of them comes with the same three problems:

•They’re not sustainable in the long run.

•They work against your body, not with it.

Zero Belly is something different. Zero Belly tweaks your approach to eating in a way that makes weight loss effortless. It resets your metabolism so fat-burning becomes automatic. And it harnesses the power of food to work with your body, unleashing your natural weight-loss mechanisms. I don’t have to convince you that losing belly fat is a good idea.

We just have to convince your body.

If you carry more fat than you want, it’s because your body has programmed itself to store the energy you eat as fat. Your body is like one of those crazy hoarders whose every nook and cranny is crammed with stuffed cats and dusty flea market finds. All that exercise and diet can do are to tidy up a bit. But if we can convince your body to give up all the energy it’s storing as fat, you’ll see rapid changes that will last a lifetime. It’s like backing the 1-800-GOT-JUNK truck up to your door and unloading all the unwanted storage!

In fact, when I built the original Zero Belly Diet, I identified three ways in which the program works. But since its publication in December 2014, we’ve learned even more about the power of the Zero Belly Foods, and new ways to tweak the program to turbocharge your weight loss.

The first thing Zero Belly does is to turn up the dial on your internal calorie furnace—a furnace that feeds on belly fat. Zero Belly unleashes the power of protein, fiber, and healthy fats to burn calories by encouraging lean muscle growth and maximizing the thermogenic effects of eating—meaning, the number of calories you burn simply by digesting your food.

You’ve probably heard a lot about “fat-burning foods,” but how exactly do they work? In fact, there are two types of fat-burning foods: those that decrease blood sugar spikes (when your blood sugar spikes, the hormone insulin rushes in and tries to store the sugar calories as fat), and those that increase metabolism (meaning you literally burn off more calories, even as you sleep).

The key is to attack fat from both ends—prevent more from forming while burning off the stores you already have. Foods that control blood sugar generally contain some combination of protein, healthy fat, and fiber—the three hallmarks of a Zero Belly meal. Calorie-burning foods, on the other hand, include green tea, vinegar, and anything that’s high in protein such as eggs, lean meats, and fish.

Protein also helps build lean muscle tissue—belly fat’s sworn enemy. In fact, the more muscle your body has, the more belly fat it burns on a daily basis. And the more belly fat you have, the harder it is to maintain muscle mass. That’s why lean protein and other muscle-supporting foods are such a critical component of these recipes.

Add a cup of green tea each day.

Protein, fiber, and healthy fats are all found throughout these recipes, but adding a cup (or two) of green tea to your daily regimen can help fire your fat furnace in both ways. First, it controls blood sugar and quashes hunger: In a Swedish study that looked at green tea’s effect on hunger, researchers divided up participants into two groups. One group sipped water with their meal and the other group drank green tea. Not only did tea-sippers report less of a desire to eat their favorite foods (even two hours after sipping the brew), they found those foods to be less satisfying. And second, it boosts your calorie burn, especially if you have it before any type of exercise: In a recent twelve-week study, participants who combined a daily habit of 4-5 cups of green tea each day with a 25-minute sweat session lost an average of two more pounds than the non-tea-drinking exercisers. Once again it’s the power of the unique catechins found in green tea that can blast adipose tissue by triggering the release of fat from fat cells (particularly in the belly), and then speeding up the liver’s capacity for turning that fat into energy. All this while doing something unique for your heart: A 2015 study from the Institute of Food Research found that the polyphenols in green tea block a “signaling molecule” called VEGF, which in the body can trigger both heart disease and cancer.

Happening right now, inside your belly, is an epic power struggle worthy of Shakespeare. But instead of Tudors and Plantagenets, you have different sorts of microbes battling it out to become monarch of your midsection—about five hundred different tribes, in fact. Some of them break down your food and extract nutrients; others hunt for food pathogens that snuck in on a bad bit of bratwurst; still others help protect you from colds and flus. (In fact, 80 percent of our immune system is based in our guts.) Scientists even believe that depression may be caused in part by unbalanced gut microbes, since 95 percent of our feel-good hormone serotonin is also located in the belly.

But it’s our weight that’s most dramatically affected by these little buggers. In fact, studies show that obese people have higher levels of bad bacteria from the phylum Firmicutes, while lean people have higher levels of bacteria from the phylum Bacteroidetes. How critical is a healthy gut to weight loss? Researchers at Kyung Hee University in Seoul, Korea, induced obesity in lab rats by feeding them a high-fat diet, then fed one group of them probiotics (in this case, Lactobacillus brevis, a healthy bacteria found in fermented foods like kimchi). The probiotic suppressed the diet-induced increase in weight gain by 28 percent!

But as with any conflict, sometimes the good guys get overwhelmed. Too much junk food (especially sugar) can knock our digestive systems out of whack and give the advantage over to the Firmicutes (a poorly named tribe, as they make you neither firm nor cute); so too can drugs such as antibiotics, heartburn remedies, or antidepressants. That’s why Zero Belly Foods are high in fiber and low in sugar, preservatives, and bloating foods like dairy. When you’re feeling lean and clean, it means your belly is in balance and the good guys are ruling the day.

Give your belly biome a workout.

One of the big buzzwords in nutrition right now is “resistant starch.” No, it’s not something your dry cleaner sprays on your shirt to make it wrinkle less. It’s actually a type of carbohydrate that, as the name suggests, resists digestion.

A lot of the buzz around resistant starch is about its great metabolism-boosting properties—in fact, it hits both ends of the metabolism spectrum, slowing down your digestive process (thereby controlling blood sugar) while also forcing your body to burn more calories during the digestion process. But resistant starch has another awesome Zero Belly property: it feeds your “good” belly bacteria.

When you do resistance training, your muscles get stronger. But according to a 2015 study in the Journal of Functional Foods, when you eat resistant starch, your gut biome gets stronger—healthy bacteria literally get a workout digesting the healthy starch, becoming more dominant and leading to a healthier gut.

150+ Delicious Recipes to Flatten Your Belly, Turn Off Your Fat Genes, and Help Keep You Lean for Life! 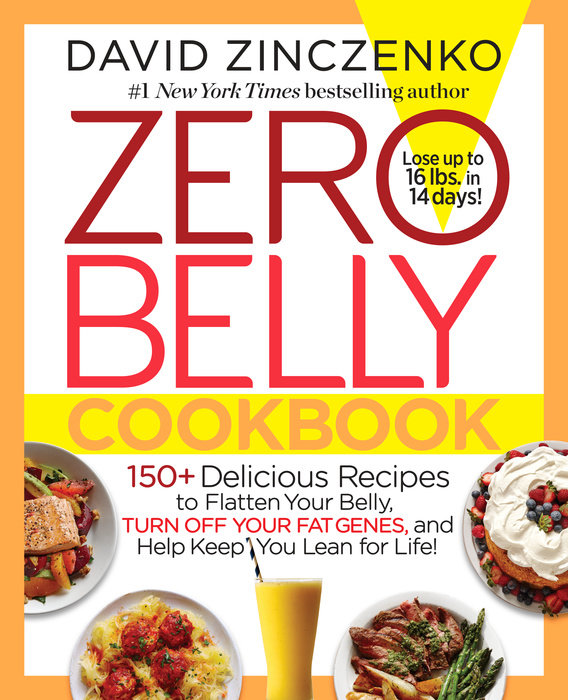