For Dr. David Beck, the loss was shattering. And every day for the past eight years, he has relived the horror of what happened. The gleaming lake. The pale moonlight. The piercing screams. The night his wife was taken. The last night he saw her alive.

Everyone tells him it’s time to move on, to forget the past once and for all. But for David Beck, there can be no closure. A message has appeared on his computer, a phrase only he and his dead wife know. Suddenly Beck is taunted with the impossible–that somewhere, somehow, Elizabeth is alive.

Beck has been warned to tell no one. And he doesn’t. Instead, he runs from the people he trusts the most, plunging headlong into a search for the shadowy figure whose messages hold out a desperate hope.

But already Beck is being hunted down. He’s headed straight into the heart of a dark and deadly secret–and someone intends to stop him before he gets there.

An excerpt from Tell No One

Another girl was about to break my heart.

She had brown eyes and kinky hair and a toothy smile. She also had braces and was fourteen years old and—

"Are you pregnant?" I asked.

I managed not to close my eyes. This was not the first time I'd seen a pregnant teen. Not even the first time today. I've been a pediatrician at this Washington Heights clinic since I finished my residency at nearby Columbia-Presbyterian Medical Center five years ago. We serve a Medicaid (read: poor) population with general family health care, including obstetrics, internal medicine, and, of course, pediatrics. Many people believe this makes me a bleeding-heart do-gooder. It doesn't. I like being a pediatrician. I don't particularly like doing it out in the suburbs with soccer moms and manicured dads and, well, people like me.

"What do you plan on doing?" I asked.

"How old is Terrell?"

She looked up at me, happy and smiling. Again I managed not to close my eyes.

The thing that always surprises me—always—is that most of these pregnancies are not accidental. These babies want to have babies. No one gets that. They talk about birth control and abstinence and that's all fine and good, but the truth is, their cool friends are having babies and their friends are getting all kinds of attention and so, hey, Terrell, why not us?

"He loves me," this fourteen-year-old told me.

"Have you told your mother?"

"Not yet." She squirmed and looked almost all her fourteen years. "I was hoping you could tell her with me."

I've learned not to judge. I listen. I empathize. When I was a resident, I would lecture. I would look down from on high and bestow upon patients the knowledge of how self-destructive their behavior was. But on a cold Manhattan afternoon, a weary seventeen-year-old girl who was having her third kid with a third father looked me straight in the eye and spoke an indisputable truth: "You don't know my life."

It shut me up. So I listen now. I stopped playing Benevolent White Man and became a better doctor. I will give this fourteen-year-old and her baby the absolute best care possible. I won't tell her that Terrell will never stay, that she's just cut her future off at the pass, that if she is like most of the patients here, she'll be in a similar state with at least two more men before she turns twenty.

Think about it too much and you'll go nuts.

We spoke for a while—or, at least, she spoke and I listened. The examining room, which doubled as my office, was about the size of a prison cell (not that I know this from firsthand experience) and painted an institutional green, like the color of a bathroom in an elementary school. An eye chart, the one where you point in the directions the Es are facing, hung on the back of the door. Faded Disney decals spotted one wall while another was covered with a giant food pyramid poster. My fourteen-year-old patient sat on an examining table with a roll of sanitary paper we pulled down fresh for each kid. For some reason, the way the paper rolled out reminded me of wrapping a sandwich at the Carnegie Deli.

The radiator heat was beyond stifling, but you needed that in a place where kids were frequently getting undressed. I wore my customary pediatrician garb: blue jeans, Chuck Taylor Cons, a button-down oxford, and a bright Save the Children tie that screamed 1994. I didn't wear the white coat. I think it scares the kids.

My fourteen-year-old—yes, I couldn't get past her age—was a really good kid. Funny thing is, they all are. I referred her to an obstetrician I liked. Then I spoke to her mother. Nothing new or surprising. As I said, I do this almost every day. We hugged when she left. Over her shoulder, her mother and I exchanged a glance. Approximately twenty-five moms take their children to see me each day; at the end of the week, I can count on one hand how many are married.

Like I said, I don't judge. But I do observe.

After they left, I started jotting notes in the girl's chart. I flipped back a few pages. I'd been following her since I was a resident. That meant she started with me when she was eight years old. I looked at her growth chart. I remembered her as an eight-year-old, and then I thought about what she'd just looked like. She hadn't changed much. I finally closed my eyes and rubbed them.

Homer Simpson interrupted me by shouting, "The mail! The mail is here! Oooo!"

I opened my eyes and turned toward the monitor. This was Homer Simpson as in the TV show The Simpsons. Someone had replaced the computer's droning "You've got mail" with this Homer audio wave. I liked it. I liked it a lot.

I was about to check my email when the intercom's squawking stopped my hand. Wanda, a receptionist, said, "You're, uh, hmm, you're, uh . . . Shauna is on the phone."

I understood the confusion. I thanked her and hit the blinking button. "Hello, sweetums."

Shauna hung up her cellular. I stood and walked down the corridor as Shauna made her entrance from the street. Shauna stalks into a room as though it offends her. She was a plus-size model, one of the few known by one name. Shauna. Like Cher or Fabio. She stood six one and weighed one hundred ninety pounds. She was, as you might expect, a head-turner, and all heads in the waiting room obliged.

Shauna did not bother stopping at Reception and Reception knew better than to try to stop her. She pulled open the door and greeted me with the words "Lunch. Now."

I hesitated and she knew she had me.

"Come on, Beck, it'll be fun. Like in college. Remember how we used to go out and scope hot babes together?"

On the way back to my office, one of the mothers gave me a big smile and pulled me aside. "She's even more beautiful in person," she whispered.

"Are you and she . . . " The mother made a together motion with her hands.

"No, she's already involved with someone," I said.

We ate at a crummy Chinese restaurant with a Chinese waiter who spoke only Spanish. Shauna, dressed impeccably in a blue suit with a neckline that plunged like Black Monday, frowned. "Moo shu pork in a tortilla shell?"

"Be adventurous," I said.

We met our first day of college. Someone in the registrar's office had screwed up and thought her name was Shaun, and we thus ended up roommates. We were all set to report the mistake when we started chatting. She bought me a beer. I started to like her. A few hours later, we decided to give it a go because our real roommates might be assholes.

I went to Amherst College, an exclusive small-Ivy institution in western Massachusetts, and if there is a preppier place on the planet, I don't know it. Elizabeth, our high school valedictorian, chose Yale. We could have gone to the same college, but we discussed it and decided that this would be yet another excellent test for our relationship. Again, we were doing the mature thing. The result? We missed each other like mad. The separation deepened our commitment and gave our love a new distance-makes-the-heart-grow-fonder dimension.

Between bites, Shauna asked, "Can you baby-sit Mark tonight?"

Mark was my five-year-old nephew. Sometime during our senior year, Shauna started dating my older sister, Linda. They had a commitment ceremony seven years ago. Mark was the by-product of, well, their love, with a little help from artificial insemination. Linda carried him to term and Shauna adopted him. Being somewhat old-fashioned, they wanted their son to have a male role model in his life. Enter me.

Next to what I see at work, we're talking Ozzie and Harriet.

"The new Disney chick is a babe and a half," Shauna said. "Their hottest since Pocahontas."

"Beats the hell out of me. Now that lesbians are chic, our social calendar is ridiculous. I almost long for the days when we hid in closets."

I ordered a beer. Probably shouldn't have, but one wouldn't hurt.

Shauna ordered one too. "So you broke up with what's-her-name," she said.

"Right. Nice name, by the way. She have a sister named Whiskey?"

"We only went out twice."

"Good. She was a skinny witch. Besides, I got someone perfect for you."

"Remember the last time you set me up?"

"So what was wrong with her?"

"For one thing, she was a lesbian."

With more than seventy million books in print worldwide, Harlan Coben is the #1 New York Times bestselling author of more than thirty novels, including the Myron Bolitar series and a series aimed at young adults featuring Myron's nephew, Mickey Bolitar. His books are published in forty-three languages around the globe and have been number one bestsellers in more than a dozen countries. The winner of the Edgar, Shamus, and Anthony Awards, he lives in New Jersey. 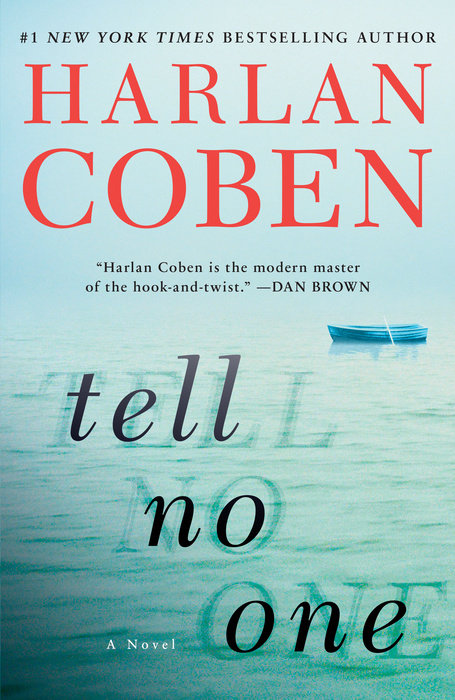