In this moving and playful collection, Billy Collins touches on an array of subjects—love, death, solitude, youth, and aging—delving deeper than ever before into the intricate folds of life.

An excerpt from Ballistics

I have stopped here on the rue des Écoles
just off the boulevard St-Germain
to look over the shoulder of a man
in a flannel shirt and a straw hat
who has set up an easel and a canvas chair
on the sidewalk in order to paint from a droll angle
a side-view of the Church of Saint Thomas Aquinas.

But where are you, reader,
who have not paused in your walk
to look over my shoulder
to see what I am jotting in this notebook?

Alone in this city,
I sometimes wonder what you look like,
if you are wearing a flannel shirt
or a wraparound blue skirt held together by a pin.

But every time I turn around
you have fled through a crease in the air
to a quiet room where the shutters are closed
against the heat of the afternoon,
where there is only the sound of your breathing
and every so often, the turning of a page.


Brightly Colored Boats Upturned on the Banks of the Charles

What is there to say about them
that has not been said in the title?
I saw them near dawn from a glassy room
on the other side of that river,
which flowed from some hidden spring
to the sea; but that is getting away from
the brightly colored boats upturned
on the banks of the Charles,
the sleek racing sculls of a college crew team.

They were beautiful in the clear early light—
red, yellow, blue and green—
is all I wanted to say about them,
although for the rest of the day
I pictured a lighter version of myself
calling time through a little megaphone,
first to the months of the year,
then to the twelve apostles, all grimacing
as they leaned and pulled on the long wooden oars.

I recall someone once admitting
that all he remembered of Anna Karenina
was something about a picnic basket,

and now, after consuming a book
devoted to the subject of Barcelona—
its people, its history, its complex architecture—

all I remember is the mention
of an albino gorilla, the inhabitant of a park
where the Citadel of the Bourbons once stood.

and point to show their children.
These locals called her Snowflake,
and here she has been mentioned again in print

in the hope of keeping her pallid flame alive
and helping her, despite her name, to endure
in this poem where she has found another cage.

Oh, Snowflake,
I had no interest in the capital of Catalonia—
its people, its history, its complex architecture—

no, you were the reason
I kept my light on late into the night
turning all those pages, searching for you everywhere.

Billy Collins is the author of twelve collections of poetry including The Rain in Portugal, Aimless Love, Horoscopes for the Dead, Ballistics, The Trouble with Poetry, Nine Horses, Sailing Alone Around the Room, Questions About Angels, The Art of Drowning, and Picnic, Lightning. He is also the editor of Poetry 180: A Turning Back to Poetry, 180 More: Extraordinary Poems for Every Day, and Bright Wings: An Illustrated Anthology of Poems About Birds. A former Distinguished Professor at Lehman College of the City University of New York, Collins served as Poet Laureate of the United States from 2001 to 2003 and as New York State Poet from 2004 to 2006. In 2016 he was inducted into the American Academy of Arts and Letters. He lives in Florida with his wife Suzannah. 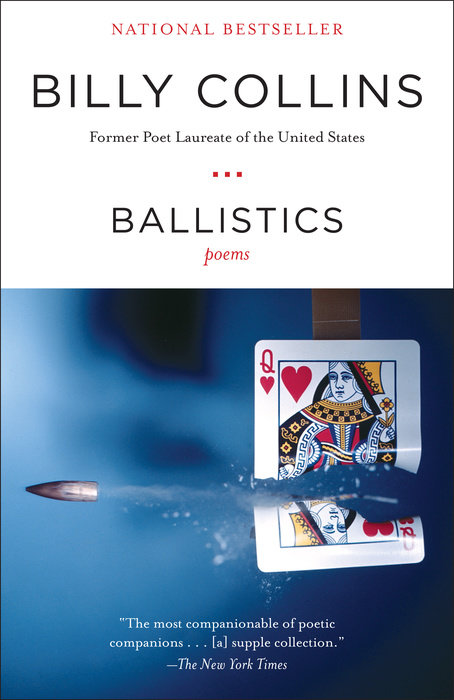