"        Never were Mr. Conrad's felicity of phrase and charm of atmosphere more obvious. . . . A book of the rare literary quality of Lord Jim is something to receive with gratitude and joy."--The New York Times

Originally published in 1900, Lord Jim is one of Joseph Conrad's most complex literary masterpieces. The story of a young sailor whose moment of cowardice haunts him for the rest of his life, Lord Jim explores Conrad's lifelong obsessions with the nature of guilt and the possibility of redemption.
Nostromo is considered by many to be Conrad's supreme achievement, and Conrad himself referred to Nostromo as his "widest canvas." Set in the fictitious South American republic of Costaguana, Nostromo reveals the effects that misguided idealism, unparalleled greed, and imperialist interests can have on a fledging nation. V. S. Pritchett wrote: "Nostromo is the most strikingly modern of Conrad's novels. It is pervaded by a profound, even morbid sense of insecurity which is the very spirit of our age."
Robert D. Kaplan's Introduction explains why the two novels together form Conrad's darkest glimpse into the flawed nature of humankind.

ROBERT D. KAPLAN is a correspondent for The Atlantic Monthly and the author of seven books of travel and foreign affairs that have been translated into a dozen languages, including Balkan Ghosts, The Ends of the Earth, and An Empire Wilderness, all bestsellers, and a collection of essays, The Coming Anarchy. He lectures frequently to the U.S. military.

An excerpt from Lord Jim & Nostromo

He was an inch, perhaps two, under six feet, powerfully built, and he advanced straight at you with a slight stoop of the shoulders, head forward, and a fixed from-under stare which made you think of a charging bull. His voice was deep, loud, and his manner displayed a kind of dogged self-assertion which had nothing aggressive in it. It seemed a necessity, and it was directed apparently as much at himself as at anybody else. He was spotlessly neat, apparelled in immaculate white from shoes to hat, and in the various Eastern ports where he got his living as ship-chandler's water-clerk he was very popular.

A water-clerk need not pass an examination in anything under the sun, but he must have Ability in the abstract and demonstrate it practically. His work consists in racing under sail, steam, or oars against other water-clerks for any ship about to anchor, greeting her captain cheerily, forcing upon him a card--the business card of the ship-chandler--and on his first visit on shore piloting him firmly but without ostentation to a vast, cavern-like shop which is full of things that are eaten and drunk on board ship; where you can get everything to make her seaworthy and beautiful, from a set of chain-hooks for her cable to a book of gold-leaf for the carvings of her stern; and where her commander is received like a brother by a ship-chandler he has never seen before. There is a cool parlour, easy-chairs, bottles, cigars, writing implements, a copy of harbour regulations, and a warmth of welcome that melts the salt of a three months' passage out of a seaman's heart. The connection thus begun is kept up, as long as the ship remains in harbour, by the daily visits of the water-clerk. To the captain he is faithful like a friend and attentive like a son, with the patience of Job, the unselfish devotion of a woman, and the jollity of a boon companion. Later on the bill is sent in. It is a beautiful and humane occupation. Therefore good water-clerks are scarce. When a water-clerk who possesses Ability in the abstract has also the advantage of having been brought up to the sea, he is worth to his employer a lot of money and some humouring.

Jim had always good wages and as much humouring as would have bought the fidelity of a fiend. Nevertheless, with black ingratitude he would throw up the job suddenly and depart. To his employers the reasons he gave were obviously inadequate. They said "Confounded fool!" as soon as his back was turned. This was their criticism on his exquisite sensibility.

To the white men in the waterside business and to the captains of ships he was just Jim--nothing more. He had, of course, another name, but he was anxious that it should not be pronounced. His incognito, which had as many holes as a sieve, was not meant to hide a personality but a fact. When the fact broke through the incognito he would leave suddenly the seaport where he happened to be at the time and go to another--generally farther east. He kept to seaports because he was a seaman in exile from the sea, and had Ability in the abstract, which is good for no other work but that of a water-clerk. He retreated in good order towards the rising sun, and the fact followed him casually but inevitably. Thus in the course of years he was known successively in Bombay, in Calcutta, in Rangoon, in Penang, in Batavia--and in each of these halting-places was just Jim the water-clerk. Afterwards, when his keen perception of the Intolerable drove him away for good from seaports and white men, even into the virgin forest, the Malays of the jungle village, where he had elected to conceal his deplorable faculty, added a word to the monosyllable of his incognito. They called him Tuan Jim: as one might say--Lord Jim.

Originally he came from a parsonage. Many commanders of fine merchant-ships come from these abodes of piety and peace. Jim's father possessed such certain knowledge of the Unknowable as made for the righteousness of people in cottages without disturbing the ease of mind of those whom an unerring Providence enables to live in mansions. The little church on a hill had the mossy greyness of a rock seen through a ragged screen of leaves. It had stood there for centuries, but the trees around probably remembered the laying of the first stone. Below, the red front of the rectory gleamed with a warm tint in the midst of grass-plots, flower-beds, and fir-trees, with an orchard at the back, a paved stableyard to the left, and the sloping glass of greenhouses tacked along a wall of bricks. The living had belonged to the family for generations; but Jim was one of five sons, and when after a course of light holiday literature his vocation for the sea had declared itself, he was sent at once to a "training-ship for oYcers of the mercantile marine."

He learned there a little trigonometry and how to cross top-gallant yards. He was generally liked. He had the third place in navigation and pulled stroke in the first cutter. Having a steady head with an excellent physique, he was very smart aloft. His station was in the fore-top, and often from there he looked down, with the contempt of a man destined to shine in the midst of dangers, at the peaceful multitude of roofs cut in two by the brown tide of the stream, while scattered on the outskirts of the surrounding plain the factory chimneys rose perpendicular against a grimy sky, each slender like a pencil, and belching out smoke like a volcano. He could see the big ships departing, the broad-beamed ferries constantly on the move, the little boats floating far below his feet, with the hazy splendour of the sea in the distance, and the hope of a stirring life in the world of adventure.

On the lower deck in the babel of two hundred voices he would forget himself, and beforehand live in his mind the sea-life of light literature. He saw himself saving people from sinking ships, cutting away masts in a hurricane, swimming through a surf with a line; or as a lonely castaway, barefooted and half naked, walking on uncovered reefs in search of shellfish to stave oV starvation. He
confronted savages on tropical shores, quelled mutinies on the high seas, and in a small boat upon the ocean kept up the hearts of despairing men--always an example of devotion to duty, and as unflinching as a hero in a book.

"Something's up. Come along."
He leaped to his feet. The boys were streaming up the ladders. Above could be heard a great scurrying about and shouting, and when he got through the hatchway he stood still--as if confounded.

It was the dusk of a winter's day. The gale had freshened since noon, stopping the traYc on the river and now blew with the strength of a hurricane in fitful bursts that boomed like salvoes of great guns firing over the ocean. The rain slanted in sheets that flicked and subsided, and between whiles Jim had threatening glimpses of the tumbling tide, the small craft jumbled and tossing along the shore, the motionless buildings in the driving mist, the broad ferryboats pitching ponderously at anchor, the vast landing-stages heaving up and down and smothered in sprays. The next gust seemed to blow all this away. The air was full of flying water. There was a fierce purpose in the gale, a furious earnestness in the screech of the wind, in the brutal tumult of earth and sky, that seemed directed at him, and made him hold his breath in awe. He stood still. It seemed to him he was whirled around.

He was jostled. "Man the cutter!" Boys rushed past him. A coaster running in for shelter had crashed through a schooner at anchor, and one of the ship's instructors had seen the accident. A mob of boys clambered on the rails, clustered round the davits. "Collision. Just ahead of us. Mr. Symons saw it." A push made him stagger against the mizzen-mast, and he caught hold of a rope. The old training-ship chained to her moorings quivered all over, bowing gently head to wind, and with her scanty rigging humming in a deep bass the breathless song of her youth at sea. "Lower away!" He saw the boat, manned, drop swiftly below the rail, and rushed after her. He heard a splash. "Let go; clear the falls!" He leaned over. The river alongside seethed in frothy streaks. The cutter could be seen in the falling darkness under the spell of tide and wind, that for a moment held her bound, and tossing abreast of the ship. A yelling voice in her reached him faintly: "Keep stroke, you young whelps, if you want to save anybody! Keep stroke!" And suddenly she lifted high her bow, and, leaping with raised oars over a wave, broke the spell cast upon her by the wind and tide.

Joseph Conrad was born in Berdichev, Ukraine, in 1857. After both of his parents died of tuberculosis, Conrad went to live with his uncle in Switzerland. After attending school in Kraków, he joined the French and then the British merchant marines, sailing to exotic destinations like the West Indies and the Congo, which would later become the backdrops for some of his fiction. In 1894 he settled down in England and began his literary career. In 1902 Conrad published his most famous work, Heart of Darkness, and continued to write until his death in 1924. 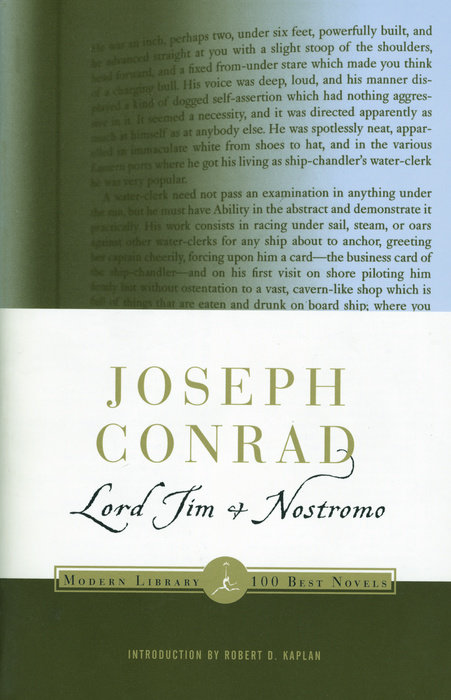