In 1993, archaeologists unearthed a set of ancient bamboo scrolls that contained the earliest known version of the Dao de jing. Composed more than two thousand years ago, this life-changing document offers a regimen of self-cultivation to attain personal excellence and revitalize moral behavior. Now in this luminous new translation, renowned China scholars Roger T. Ames and David L. Hall bring the timeless wisdom of the Dao de jing into our contemporary world.

In this elegant volume, Ames and Hall feature the original Chinese texts of the Dao de jing and translate them into crisp, chiseled English that reads like poetry. Each of the eighty-one brief chapters is followed by clear, thought-provoking commentary exploring the layers of meaning in the text. This new version of one of the world’s most influential documents will stand as both a compelling introduction to Daoist thought and as the classic modern English translation.

An excerpt from Dao De Jing

The Daodejing has probably been translated into the English language more often than any other piece of world literature. Why translate it again? An entirely reasonable question.

And a reasonable question requires a reasonable answer. Recent archaeological finds (Mawangdui 1973 and Guodian 1993) have provided us with textual materials that are physically more than a millennium earlier than previously available versions of Daodejing. Such finds challenge the authority of existing translations to the extent that these new materials have increased our knowledge of the text and of the circumstances of its transmission. And there is broad scholarly agreement that these early redactions of the Daodejing do indeed cast important new light on the structure and the meaning of this defining document in Daoist philosophy.

In addition to providing new insights into an old document, these archaeological finds have also provided us with textual materials that are importantly different from what has been available up until now, enabling us to resolve some persistent linguistic problems. Undoubtedly the most substantial addition to the Daodejing are the fourteen strips–The Great One Gives Birth to the Waters–that appear as an integral element within one of the Guodian versions of the text. Beyond the seamless physical consistency of these strips with the rest of this early exemplar of the Daodejing, they contain a discussion of Daoist cosmology that not only uses the familiar Daodejing vocabulary, but further brings a clarity to this cosmology that enables us to understand other chapters of the Daodejing in a way that has not been possible before. In deference to a continuing and yet inconclusive debate on the relationship between this exciting new portion of the text and the Daodejing itself, we have followed the practice of excerpting this new document and of giving it the title The Great One Gives Birth to the Waters. We have translated it, and have discussed it in some detail, in an appendix. Whatever the ultimate status of these strips with respect to the Daodejing itself, their critical importance as a resource for illuminating the Daoist response to the cosmological question of the source and nature of creativity is nowhere in question.

However, beyond the archaeological finds there is, if possible, an even more compelling reason to take up the project of offering yet another English-language translation of the Daodejing. The Daodejing is a profoundly “philosophical” text, and yet it has not been treated as such. It has been translated and interpreted initially by missionaries, and more recently by sinologists. That is to say that, to date, the Daodejing has only incidentally and tangentially been engaged by philosophers. This assertion is meant neither to impugn the usually good intentions of the missionaries nor to pretend that there is any substitute for the sophisticated philological, historical, literary, and cultural sensibilities that we associate with good sinology. In fact, if there is an indictment to be made, it is to be directed against professional philosophy in our Western seats of learning that, in its own self-understanding, continues to insist that philosophy is exclusively an Anglo-European enterprise.


Given this marginalization of other philosophical traditions, philosophy as a discipline has an unfulfilled responsibility to our academy. An essential occupation of philosophers is to identify and describe the generic traits of the human experience in order to locate problems within the broadest possible context. And these defining generic characteristics are importantly different as we move from one cultural and epochal site to another. Philosophers have the responsibility to seek out and to understand the uncommon assumptions that distinguish cultures as a preventative against cultural reductionism and the misconceptions such ethnocentrism entails. Thus, the absence of philosophers in the interpretation of Chinese philosophy has come at a cost. It has become a commonplace to acknowledge that, in the process of Western humanists attempting to make sense of the classical Chinese philosophical literature, many Western assumptions have inadvertently been insinuated into the understanding of these texts, and have colored the vocabulary through which this understanding has been articulated. Chinese philosophy has been made familiar to Western readers by first “Christianizing” it, and then more recently by locating it within a poetical-mystical-occult worldview. To the extent that Chinese philosophy has become the subject of Western philosophical interest at all, it has usually been analyzed within the framework of categories and philosophical problems not its own.

The recent recovery of new versions of existing texts and the further discovery of many that have been long lost has occasioned the retranslation of many of the classics, and has provided both a pretext and an opportunity for philosophers to step up and rethink our standard readings. Most importantly, it has presented us with the challenges of trying, with imagination, to take these texts on their own terms by locating and interpreting them within their own worldview.

The happy collaboration of Hall and Ames has, over nearly a quarter of a century, been an attempt, however imperfect, to bring together both sinological and philosophical skills first in our interpretive studies of classical Chinese philosophy, and more recently, in our new translations of seminal texts. In developing a strategy for our translations, benefiting enormously from the participation of Henry Rosemont Jr. in these efforts, we have developed a structure that includes a philosophical introduction, an evolving glossary of key philosophical terms, a self-consciously interpretive translation, and the inclusion of a critical Chinese text. 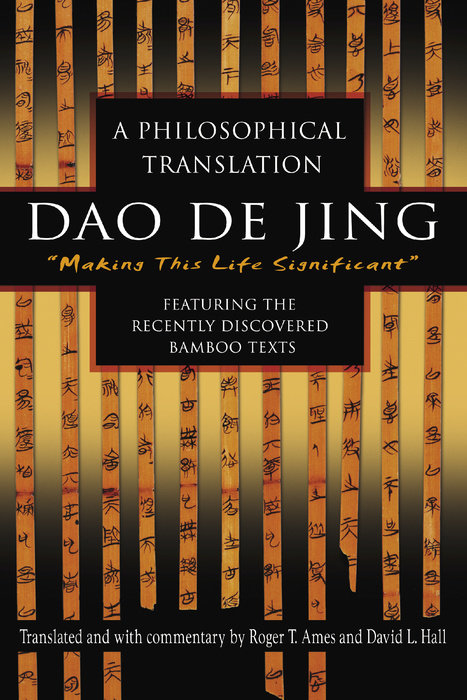