The most widely read military classic in human history, newly translated and revised in accordance with newly discovered materials of unprecedented historical significance.

Fluid, crisp and rigorously faithful to the original, this new text is destined to stand as the definitive version of this cornerstone work of Classical Chinese. Of compelling importance not only to students of Chinese history and literature, but to all readers interested in the art or the philosophy of war.

An excerpt from Sun-Tzu: The Art of Warfare

The Sun-tzu, or “Master Sun,” is the longest existing and most widely studied military classic in human history. Quite appropriately, it dates back to the Warring States period (c. 403-221 B.C.), a formative phase in Chinese civilization when contributions in literature and philosophy were rivaled in magnitude and sophistication only by developments in an increasingly efficient military culture.

Over the course of the preceding Spring and Autumn period (c. 722-481 B.C.), scores of small, semiautonomous states had joined in an ongoing war of survival, leaving in its wake only the dozen or so “central states” (chung-kuo) from which present-day “China” takes its actual Chinese-language name.1 By the fifth century B.C., it had become clear to all contenders that the only alternative to winning was to perish. And as these rivals for the throne of a unified China grew fewer, the stakes and the brutality of warfare increased exponentially.

During this period, warfare was transformed from a gentlemanly art to an industry, and lives lost on the killing fields climbed to numbers in the hundreds of thousands. Itinerant philosophers toured the central states of China, offering their advice and services to the contesting ruling families. Along with the Confucian, Mohist, and the Legalist philosophers who joined this tour was a new breed of military specialists schooled in the concrete tactics and strategies of waging effective warfare. Of these military experts, history has remembered best a man named Sun Wu from the state of Wu, known honorifically as “Sun-tzu” or “Master Sun.”

A major reason why Master Sun has remained such a prominent force in the military arts is the military treatise Sun-tzu: The Art of Warfare (Sun-tzu ping-fa), that came to be associated with his name early in the tradition. Over the centuries, a library of commentaries has accrued around the text, and it has been translated into many, if not most, of the world’s major languages.

Although there are several popular English translations of the Sun-tzu, several of which are discussed below, there are reasons why a new translation and study of the text is necessary at this time. The Sun-tzu offered here in this Classics of Ancient China series differs markedly from previous editions in several important respects.

In 1972 a new text of the Sun-tzu was uncovered in an archaeological find in Shantung province, containing not only large sections of the thirteen-chapter work that has come down to the present day, but also portions of five lost chapters of the Sun-tzu. All of these materials, previously unavailable to the student of the Sun-tzu text, were entombed as burial items sometime between 140 and 118 B.C.

The English translation of the thirteen-chapter core text contained in Part I of this book has been informed by a copy of the Sun-tzu over a thousand years older than those on which previous translations were based. Prior to the excavations at Yin-ch’üeh-shan, the most recent text on which translations could be based had been a Sung dynasty (960–1279) edition. The supplemental five chapters that have been translated below as Part II and which in length are about 20 percent of the thirteen-chapter core text, are entirely new, and provide us with additional insights into both the content and the structure of the original text.

Part III of this book contains another window on the Sun-tzu provided by traditional encyclopedic works and commentaries containing references to the Sun-tzu dating back as early as the first century A.D. In length, this section adds more than 2,200 characters—over a third of the thirteen-chapter text. The encyclopedic works as a genre were generally compiled by gathering citations from the classical texts around specific topics such as the court, animals, plants, omens, courtesans, and so on. One recurring encylopedia topic has been warfare. Ancient commentaries written by scholars to explain classical works have also on occasion referred to the Sun-tzu. To this new, expanded text of Sun-tzu I have added Part III. It contains materials from the encyclopedias, and from some of the earliest commentaries, that have been ascribed directly to Master Sun. Now that we can have greater confidence that the Sun-tzu was a larger, more complex text, there is good reason to believe that at least some of these attributions are authentic. One factor that had previously brought these materials into question was a difference in style: The thirteen-chapter text is narrative prose while the encyclopedic citations are, by and large, in dialogue form. Now that we have confirmed “outer” commentarial chapters of the Sun-tzu that are also structured as dialogues and that share many stylistic features with the encyclopedic citations, our reasons for being suspicious are less compelling. Although the authenticity of any one of these passages is still impossible to determine, the general correspondence between passages found in the reconstructed Sun-tzu and those preserved in the encyclopedias suggest that many of the citations might well be from the lost portions of this text.

I also have included in Part III a few fragments from a 1978 archaeological find in Ch’ing-hai province dating from the first or second centuries B.C. Six of the strips uncovered refer explicitly to “Master Sun,” suggesting some relationship with the Sun-tzu.

In addition to working from the earliest text of the Sun-tzu now available and translating newly recovered portions of the Sun-tzu, I have tried to underscore the philosophic importance of this early work. Most accounts of the Sun-tzu have tended to be historical; mine is cultural. In the Introduction that precedes the translations, I have attempted to identify those cultural presuppositions that must be consciously entertained if we are to place the text within its own world view. In our encounter with a text from a tradition as different from ours as is classical China’s, we must exercise our minds and our imaginations to locate it within its own ways of thinking and living. Otherwise we cannot help but see only our own reflection appearing on the surface of Chinese culture when we give prominence to what is culturally familiar and important to us, while inadvertently ignoring precisely those more exotic elements that are essential to an appreciation of China’s differences. By contrasting our assumptions with those of the classical Chinese world view, I have tried to secure and lift to the surface those peculiar features of classical Chinese thought which are in danger of receding in our interpretation of the text.

In addition to the role that philosophy plays in enabling us to distinguish the classical Chinese world view from our own, it has another kind of prominence. We must explain the intimate relationship in this culture between philosophy and warfare: We need to say why almost every one of the early Chinese philosophers took warfare to be an area of sustained philosophical reflection and how the military texts are themselves applied philosophy.

This edition of the Sun-tzu seeks to satisfy the needs of the China specialist as well as those of the generalist. To this end, a critical Chinese-language text of the Sun-tzu has been reconstructed from the available redactions of the work on the basis of the most authoritative scholarship available, and included with the translation. This critical text is based upon the collective judgment of China’s leading scholars in military affairs. For the generalist who seeks a better understanding of the text within its broader intellectual environment, I have provided the aforementioned philosophic overview.

Given the long and eventful history of the Sun-tzu itself, its introduction to the English-speaking world has been very recent and rather undistinguished.2 In spite of some illuminating criticisms by D. C. Lau (1965) about the quality of the Samuel B. Griffith translation (1963), one would still have to allow that Griffith’s rendition of the Sun-tzu and his commentary on various aspects of the text was a quantum improvement over what had gone before and to date has been our best effort to capture the text for the English-speaking world. The first prominent English translation by Captain E. F. Calthrop (1908) was indeed so inadequate that the vitriolic and undignified assault that it provoked from the well-known sinologist and translator Lionel Giles, then an assistant curator at the British Museum, discolors the reasonable quality of Giles’s own attempt. While the Giles translation of 1910 is somewhat compromised by his unrelenting unkindnesses to poor pioneering Calthrop, it is still a scholarly first run on a difficult text and has the virtue of including a version of the Sun-tzu in Chinese.

Not much happened in the half century between Giles and Griffith. The strength of Griffith’s work is that it is the product of a mature and intelligent military man. Samuel B. Griffith rose to the rank of Brigadier General in the United States Marine Corps, and wrote extensively and well on military matters from the battle of Guadalcanal to the Chinese People’s Liberation Army. The many practical insights provided by Griffith’s commentary are invaluable, and the quality of his translation is superior to Giles’s and to recent popular attempts such as the Thomas Cleary translation (1988), informed as the latter is by neither practical military wisdom nor scholarship.

Finally, I have used the occasion of this publication to introduce the reader to recent Chinese archaeological excavations—especially those beginning at Yin-ch’üeh-shan in 1972—in acknowledgment of the importance of these discoveries for rethinking the classical period in China. From these sites we have recovered a cache of textual materials, including everything from new redactions of extant classics to works that have been lost for thousands of years. In many ways, each of these excavations captures one historical moment from centuries long past, and allows us, with imagination, to step back and steal a glimpse of a material China that has not otherwise been available to us. And from these ancient relics and textual materials we are able to reconstitute one cultural site to test our theories and speculations about a world that is no more.

Roger T. Ames is a professor of Chinese philosophy at the University of Hawaii, and the director of its Center for Chinese Studies. He is also editor of the journals Philosophy East & West and China Review International. He is the author of several interpretative studies on classical Confucianism, including Thinking Through Confucius (with David L. Hall). His earlier translation of Sun-Tzu: The Art of Warfare is recognized as a landmark of contemporary Chinese military and philosophical studies. 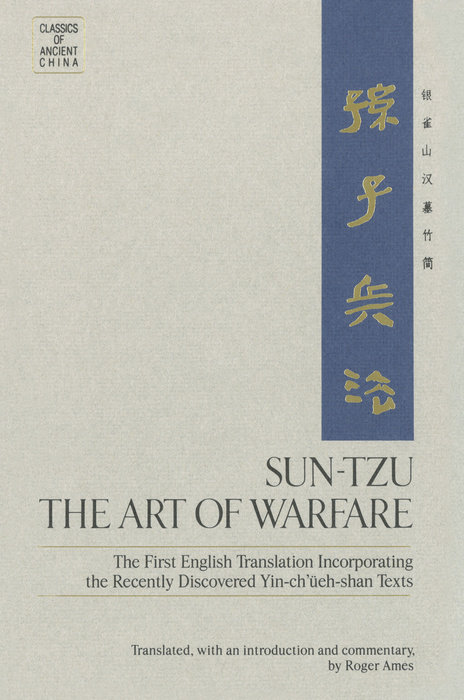