#1 NEW YORK TIMES BESTSELLER • From the author of Timeline, Sphere, and Congo, this is the classic thriller of science run amok that took the world by storm.

An astonishing technique for recovering and cloning dinosaur DNA has been discovered. Now humankind’s most thrilling fantasies have come true. Creatures extinct for eons roam Jurassic Park with their awesome presence and profound mystery, and all the world can visit them—for a price.

In Jurassic Park, Michael Crichton taps all his mesmerizing talent and scientific brilliance to create his most electrifying technothriller.

An excerpt from Jurassic Park

Mike Bowman whistled cheerfully as he drove the Land Rover through the Cabo Blanco Biological Reserve, on the west coast of Costa Rica. It was a beautiful morning in July, and the road before him was spectacular: hugging the edge of a cliff, overlooking the jungle and the blue Pacific. According to the guidebooks, Cabo Blanco was unspoiled wilderness, almost a paradise. Seeing it now made Bowman feel as if the vacation was back on track.

Bowman, a thirty-six-year-old real estate developer from Dallas, had come to Costa Rica with his wife and daughter for a two-week holiday. The trip had actually been his wife’s idea; for weeks Ellen had filled his ear about the wonderful national parks of Costa Rica, and how good it would be for Tina to see them. Then, when they arrived, it turned out Ellen had an appointment to see a plastic surgeon in San Jose. That was the first Mike Bowman had heard about the excellent and inexpensive plastic surgery available in Costa Rica, and all the luxurious private clinics in San Jose.

Of course they’d had a huge fight. Mike felt she’d lied to him, and she had. And he put his foot down about this plastic surgery business. Anyway, it was ridiculous, Ellen was only thirty, and she was a beautiful woman. Hell, she’d been Homecoming Queen her senior year at Rice, and that was not even ten years earlier. But Ellen tended to be insecure, and worried. And it seemed as if in recent years she had mostly worried about losing her looks.

That, and everything else.

The Land Rover bounced in a pothole, splashing mud. Seated beside him, Ellen said, “Mike, are you sure this is the right road? We haven’t seen any other people for hours.”

“There was another car fifteen minutes ago,” he reminded her. “Remember, the blue one?”

“Darling, you wanted a deserted beach,” he said, “and that’s what you’re going to get.”

“Yeah, Dad, I hope you’re right,” said Christina, from the backseat. She was eight years old.

“Trust me, I’m right.” He drove in silence a moment. “It’s beautiful, isn’t it? Look at that view. It’s beautiful.”

Ellen got out a compact and looked at herself in the mirror, pressing under her eyes. She sighed, and put the compact away.

The road began to descend, and Mike Bowman concentrated on driving. Suddenly a small black shape flashed across the road and Tina shrieked, “Look! Look!” Then it was gone, into the jungle.

“Can I count it?” Tina said, taking her pencil out. She was keeping a list of all the animals she had seen on her trip, as a project for school.

Tina consulted the pictures in the guidebook. “I don’t think it was a squirrel monkey,” she said. “I think it was just another howler.” They had seen several howler monkeys already on their trip.

“Hey,” she said, more brightly. “According to this book, ‘the beaches of Cabo Blanco are frequented by a variety of wildlife, including howler and white-faced monkeys, three-toed sloths, and coatimundis.’ You think we’ll see a three-toed sloth, Dad?”

“Just look in the mirror.”

The road sloped downward through the jungle, toward the ocean.

Mike Bowman felt like a hero when they finally reached the beach: a two-mile crescent of white sand, utterly deserted. He parked the Land Rover in the shade of the palm trees that fringed the beach, and got out the box lunches. Ellen changed into her bathing suit, saying, “Honestly, I don’t know how I’m going to get this weight off.”

“You look great, hon.” Actually, he felt that she was too thin, but he had learned not to mention that.

Tina was already running down the beach.

“Later,” Tina shouted, over her shoulder. “I’m going to see if there’s a sloth.”

Ellen Bowman looked around at the beach, and the trees. “You think she’s all right?”

“Honey,” he said firmly. “Snakes are cold-blooded. They’re reptiles. They can’t control their body temperature. It’s ninety degrees on that sand. If a snake came out, it’d be cooked. Believe me. There’s no snakes on the beach.” He watched his daughter scampering down the beach, a dark spot on the white sand. “Let her go. Let her have a good time.”

He put his arm around his wife’s waist.

Tina ran until she was exhausted, and then she threw herself down on the sand and gleefully rolled to the water’s edge. The ocean was warm, and there was hardly any surf at all. She sat for a while, catching her breath, and then she looked back toward her parents and the car, to see how far she had come.

Her mother waved, beckoning her to return. Tina waved back cheerfully, pretending she didn’t understand. Tina didn’t want to put sunscreen on. And she didn’t want to go back and hear her mother talk about losing weight. She wanted to stay right here, and maybe see a sloth.

Tina had seen a sloth two days earlier at the zoo in San Jose. It looked like a Muppets character, and it seemed harmless. In any case, it couldn’t move fast; she could easily outrun it.

Now her mother was calling to her, and Tina decided to move out of the sun, back from the water, to the shade of the palm trees. In this part of the beach, the palm trees overhung a gnarled tangle of mangrove roots, which blocked any attempt to penetrate inland. Tina sat in the sand and kicked the dried mangrove leaves. She noticed many bird tracks in the sand. Costa Rica was famous for its birds. The guidebooks said there were three times as many birds in Costa Rica as in all of America and Canada.

In the sand, some of the three-toed bird tracks were small, and so faint they could hardly be seen. Other tracks were large, and cut deeper in the sand. Tina was looking idly at the tracks when she heard a chirping, followed by a rustling in the mangrove thicket.

Did sloths make a chirping sound? Tina didn’t think so, but she wasn’t sure. The chirping was probably some ocean bird. She waited quietly, not moving, hearing the rustling again, and finally she saw the source of the sounds. A few yards away, a lizard emerged from the mangrove roots and peered at her.

Tina held her breath. A new animal for her list! The lizard stood up on its hind legs, balancing on its thick tail, and stared at her. Standing like that, it was almost a foot tall, dark green with brown stripes along its back. Its tiny front legs ended in little lizard fingers that wiggled in the air. The lizard cocked its head as it looked at her.

Tina thought it was cute. Sort of like a big salamander. She raised her hand and wiggled her fingers back.

The lizard wasn’t frightened. It came toward her, walking upright on its hind legs. It was hardly bigger than a chicken, and like a chicken it bobbed its head as it walked. Tina thought it would make a wonderful pet.

She noticed that the lizard left three-toed tracks that looked exactly like bird tracks. The lizard came closer to Tina. She kept her body still, not wanting to frighten the little animal. She was amazed that it would come so close, but she remembered that this was a national park. All the animals in the park would know that they were protected. This lizard was probably tame. Maybe it even expected her to give it some food. Unfortunately she didn’t have any. Slowly, Tina extended her hand, palm open, to show she didn’t have any food.

The lizard paused, cocked his head, and chirped.

And then, without warning, the lizard jumped up onto her outstretched hand. Tina could feel its little toes pinching the skin of her palm, and she felt the surprising weight of the animal’s body pressing her arm down.

And then the lizard scrambled up her arm, toward her face.

“I just wish I could see her,” Ellen Bowman said, squinting in the sunlight. “That’s all. Just see her.”

“I’m sure she’s fine,” Mike said, picking through the box lunch packed by the hotel. There was unappetizing grilled chicken, and some kind of a meat-filled pastry. Not that Ellen would eat any of it.

“I thought that’s what you wanted,” Mike Bowman said.

“I just wish I could see her, is all,” Ellen said.

Then, from down the beach, carried by the wind, they heard their daughter’s voice. She was screaming.

Michael Crichton was a writer, director, and producer, best known as the author of Jurassic Park and the creator of ER. One of the most recognizable names in literature and entertainment, Crichton sold more than 200 million copies of his books, which have been translated into 40 languages and adapted into 15 films. He died in 2008. 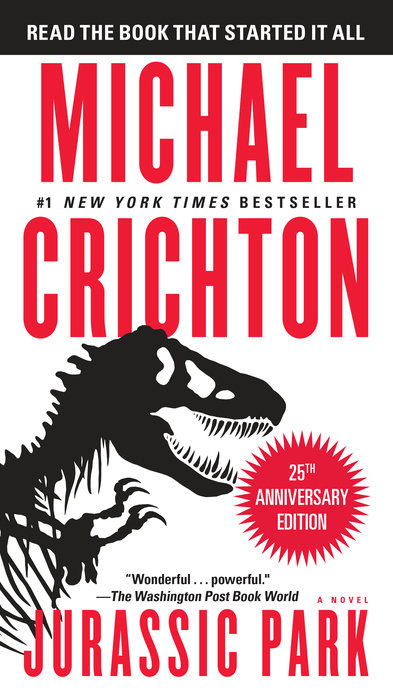