How This Crisis Can Restore Our Values and Renew America

“This is the end of the world as we’ve known it,” Kurt Andersen writes in Reset. “But it isn’t the end of the world.” In this smart and refreshingly hopeful book, Andersen–a brilliant analyst and synthesizer of historical and cultural trends, as well as a bestselling novelist and host of public radio’s Studio 360–shows us why the current economic crisis is actually a moment of great opportunity to get ourselves and our nation back on track.

Historically, America has always shifted between wild, exuberant speculation and steady, sober hard work, as well as back and forth between economic booms and busts, and between right and left politically. This is one of the rare moments when all these cycles shift dramatically and simultaneously–a moment when complacency ends, ossified structures loosen up, and enormous positive change is possible.

The shock to the system can enable each of us to rethink certain habits and focus more on the things that make us authentically happy. The present flux can enable us as a society to consolidate the enormous gains of the last several decades in areas such as technology, crime prevention, women’s and civil rights, and the democratization of the planet. We can reap the fruits of a revival of realism and pragmatism at home and abroad. As we enter a new era of post-party-line common sense, we can start to reinvent hopelessly broken systems–in health care, education, climate change, and more–and rediscover some of the old-fashioned American values of which we’ve lost sight.

In Reset, Andersen explains how we’ve done it before and why we are about to do it again–and better than ever.

An excerpt from Reset


We Let the Good Times Roll

Let’s be honest: we all saw this coming for a long, long time.

In the early 1980s, right around when Ronald Reagan became president and Wall Street’s great modern bull market began, we Americans gave ourselves over to gambling (and winning). We started thinking magically. From 1980 to 2007 the price of the average new American home quadrupled, and almost doubled even after adjusting for inflation. The Dow Jones Industrial Average climbed from 803 in the summer of 1982 to 14,165 in the fall of 2007–a 500 percent increase after inflation.

From the beginning of the 1980s through 2007, the share of disposable income that each household spent paying off its mortgage and consumer debt increased by 35 percent. Back in 1982, the average American household saved 11 percent of its disposable income, but then the percentage steadily dropped, to less than 1 percent in 2007.

Not coincidentally, it was during this same period that state- sanctioned and state- run gambling became ubiquitous in America. Until the late 1980s, only Nevada and New Jersey had casinos, but now twelve states do, and forty- eight of the fifty have some form of legalized betting. It’s as if we decided that Mardi Gras and Christmas are so much fun we ought to make them year- round ways of life. We started living large literally as well as figuratively. From the beginning to the end of the long boom, the size of the average new American house increased by half, even as the average family became smaller. During the two decades ending 2007, the average new American car got 29 percent heavier, 89 percent more powerful, and 2 percent less efficient. Meanwhile, the average American gained about a pound a year, so that an adult of a given age is now at least twenty pounds heavier than someone of the same age during the 1970s. Back in the late 1970s, 15 percent of Americans were obese; more than a third of us are now.

We saw what was happening for years, for decades, but we ignored it or shrugged it off, not quite believing that push would really, finally come to shove. The U.S. automobile industry has been in deep trouble for decades. Detroit’s unprofitability this last year has been breathtaking, but as long ago as 1980 (the year the federal government first bailed out Chrysler) newspapers were regularly carrying headlines about “record losses” at the car companies. Ever since then, cheap oil and occasional upticks–minivans and pickup trucks and SUVs! Saturn! the PT Cruiser!– have prolonged the great denial, sustaining an increasingly desperate wishfulness that the good old days might somehow return.

For a decade now, ever since the web really took off, almost every part of the old- media industry–newspapers, magazines, network TV, local TV, records–has been in trouble, with only the rate, speed, and severity of shrinkage in question. But until very recently, most of them were managed as though their businesses wouldn’t, couldn’t ever really, finally die. But newspapers’ circulations are now evaporating at a stupendously accelerating rate–by 5 and 10 and 20 percent a year–and last year Americans bought fewer than half as many CDs as they did in 2000. We watched the median household income steadily decline since the end of the twentieth century . . . but, but, but our houses and our 401(k)s were ballooning in value, right? Even (and sometimes especially) smart, proudly rational people engaged in magical thinking, acting as if the miraculous power of the Internet and its “new economy” would somehow, miraculously, make everything copacetic again. We all clapped our hands and believed in fairies. We gorged on free lunches.

The popular culture tried to warn us. For twenty years now, we have had Homer Simpson’s spot- on caricature of the quintessential American–childish, irresponsible, willfully oblivious, fat and happy. And more recently, there was Wall- E, with all of humanity reduced to Homerized refugees from a despoiled earth. There was also a profusion of darker speculations, fictional and otherwise, concerning our decline and fall–some fact based, some entirely fictional, but all expressions of a shared and growing sense that our recklessness and complacency were sending us over the falls. There were news stories warning of a real estate bubble back in 2005, years before the bubble burst. Every season saw some new comparison of the United States to the late Roman Empire by authors of every ideological stripe. There were also the Left Behind novels, Cormac McCarthy’s The Road, end- of- the- world feature films (The Day After Tomorrow, 28 Days, I Am Legend) and documentaries (An Inconvenient Truth), and a rise of hysterical chatter about the cosmic meltdown scheduled by the ancient Mayans for 2012.

Even in opinion polls taken last year, before the crash, between 70 and 85 percent of Americans were saying they thought the country was “on the wrong track.” We knew, in our heart of hearts, that something had to give.

Especially those of us of a certain age. Remember when each decade, not long after it finished, assumed a distinct character? We all knew and know what “the ’50s” mean, and they definitively ended with the Pill, JFK’s assassination, and the Beatles. Then “the ’60s” ended when countercultural utopians abandoned their fantasies and everyone else got tired of being perpetually alarmed and hectored. And “the ’70s” ended when stimulants overtook depressants as America’s substances of choice, and AIDS appeared.

Yet in all salient respects, “the ’80s”–as defined by Reaganism’s reshaping of the political economy, the enthralling introduction of PCs, and the vertiginous rise in the stock market–simply never ended.

It’s as if the Roaring Twenties, instead of crashing to a halt in 1929, had lasted all the way until 1945, uninterrupted by a depression or world war. Despite the recession of 1990 . . . and the popped bubble in technology stocks in 2000 . . . and then another recession . . . and the terrorist attacks in 2001 . . . despite all of it, the 1980s spirit endured, like an awesome winning streak in Las Vegas or a multigenerational rave that went on and on and on. The Soviet Union collapsed: yes! American- style capitalism triumphed and spread: hooray! So what if every year since the turn of the twenty- first century the U.S. economy was growing much more slowly than the global economy? The (Chinese- made) stuff we were all buying at Walmart and Costco and H&M stayed supercheap–as did money itself, which our new best friends, the Chinese, obligingly supplied to us by the low- interest- rate trillion. The fresh technological miracles and wonders just kept on coming, reinforcing our sense that progress was on the march and magic was in the air. Even 9/11 and our resulting Iraqi debacle, after a while, came to seem like mere bumps in the road.

Deep down we had an inkling at least that the spiral of over- leverage and overspending and the prices of stocks and houses bubbling ever higher were unsustainable, just as everyone figured that the unprecedented performances of baseball players like Barry Bonds and Roger Clemens couldn’t be kosher, but . . . no one wanted to be a buzz kill. From 1982 until 2008, we partied like it was 1999.

Kurt Andersen is the bestselling author of Evil Geniuses, Fantasyland and the novels True Believers, Heyday andTurn of the Century, among other books. He contributes to The New York Times and was host and co-creator of Studio 360, the Peabody Award–winning public radio show and podcast. He also writes for television, film, and the stage. Andersen co-founded Spy magazine, served as editor in chief of New York, and was a cultural columnist and design critic for Time, New York and The New Yorker. He graduated from Harvard College and lives in Brooklyn.

How This Crisis Can Restore Our Values and Renew America 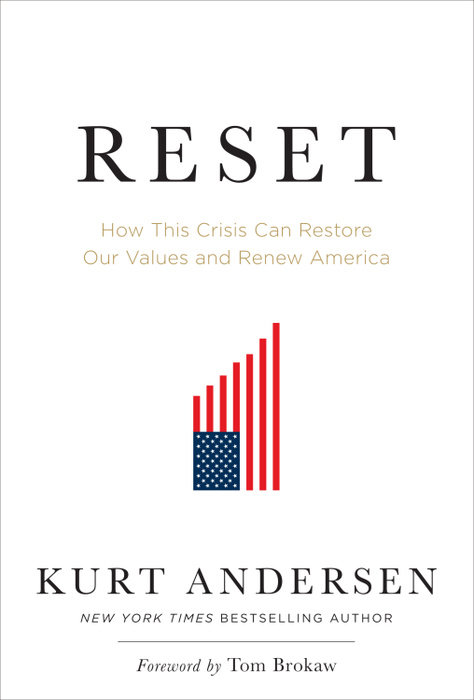