Angels have been with us in every time and culture, and in many religious traditions. Ask Your Angels vividly chronicles how they are currently reaching out to every one of us in a totally new way, bridging our physical reality with their pure spiritual energy. From historical writings and widespread contemporary experience that includes their own workshops, the authors show us how we can draw on the power of angels to reconnect with our lost inner selves and to achieve our goals, whether they be better relationships, healing an illness, or recovery from addiction

To align with the angelic energy field, you will use five simple steps, as well as exercises, meditations, and visualizations, to learn how to talk with your angels—in your mind, in letters, in dreams, on a computer—and ask their guidance in matters from the inspired to the mundane.

From Gabriel, Michael, Raphael, and Uriel to the angels of birth and death, from the Earth Angel to the guardian or companion angel who is your personal teacher, comforter, and intimate friend, this guide will introduce you to humor, wisdom, and companionship that come from contact with angels, for they are a doorway to the Divine within us.

An excerpt from Ask Your Angels

You are driving on the interstate across the great southwestern desert. It’s night. In the focused beams of your headlights you see a large metal tire iron falling from the tow truck thirty yards ahead of you. It bounces once and hurtles straight for your windshield. Feet away, it simply disappears.

It happened to Carolina.

You’re traveling in your station wagon with a friend beside you. It’s late, you’re tired, and you’ve been driving hard for hours. The snow has stopped falling, but there are slippery patches of ice on the road. Suddenly, while you both watch, frozen in horror, the eighteen-wheeler in front of you jackknifes. Then everything seems to be happening in slow motion. You, your dumbstruck companion, and your heavily laden station wagon are sailing out over the median, right over the two opposite lanes of oncoming traffic. You’re deposited on the other side of the freeway, so gently that nothing and no one is damaged, facing back in the direction from which you came.

It happened to Sara and her friend.

Joe never could explain it, however many times he’d run it through his mind afterward. Something about the entire event made him feel acutely uncomfortable, as if he’d been wholly, unreasonably privileged. Saved for an unspecified destiny.

It happened in Vietnam. Joe was working in a shed in the camp’s ammunition dump when an enemy mortar scored a direct hit. The shell demolished the dump. One hundred and eighty-four men died—but Joe walked out of it untouched.

Three true examples of mysterious happenings—incidents that defy rational, logical explanation. Our culture would have us believe that angels don’t exist. But Carolina, Sara, and Joe know that angels do exist. Angels saved their lives.

Angels don’t only show up in life-threatening situations. They’re with us all the time. Polly saw an angel in her kitchen, on a sunny afternoon when she was baking cookies for her kids. And Ben’s been talking to angels since his grandmother first told him about them in 1957.

Perhaps when you were young, you were in touch with your invisible friends but weren’t believed and learned to keep silent after that—and forgot. Almost everyone has had a mysterious, unexplained occurrence in his life. Your story may not be as dramatic as the first three examples we’ve given. Or you may not even think you have a story. But the angels come into our lives in different ways. If you’ve picked up this book, the angels have already touched you. And this is the beginning of your story.

There are many books about people’s encounters with angels. There are also a number of books on the history of angels in art and literature. This book is different from all the rest. It will teach you how to talk with your angels. The simple five-step method you will be using is called the GRACE Process.

Ask Your Angels is a guide to establishing a new form of relationship with your celestial companions—that of best friends. It comes into being as part of the great reawakening to the angels that is currently under way. Whatever belief you’ve previously held about them, applying what you’ll learn here will open you to a new way of being with these blessed messengers.

In Part I, we’ll be sharing a bit of the history of angelic encounters with the human race. Then we trace the evolution of how people have perceived angels and the celestials’ impact on the World Mind. And to give you a sense of how it happened to us, we’ll tell you the stories of how we met our own angels. We hope that our personal stories will pave the way for you to enter into a new spiritual companionship of your own.

Anyone and everyone can talk with celestials—the three of us have been doing it for years. And with direct input from our beloved companions we have taught many, many other people to do it, too. From all these experiences, we distilled the GRACE Process, which we’ll be guiding you through in Part II of the book. If you approach the exercises and meditations that we offer with heartfelt sincerity, you’ll make full, joyful contact with your own guardian angels.

There are many different divination tools, such as the tarot, the runes, and the I Ching. In this book we will be sharing a new one with you—the Angel Oracle. Using it is an enjoyable way to open yourself to the wisdom of a wide range of angels and will help you tap into your own intuitive knowing.

Once you form a relationship with your heavenly helpers, whole new vistas unfold. In Part III, you enter into a working partnership with the angels, for the purpose of personal and global transformation. You’ll learn how to fine-tune your relationship and team up with the angels to achieve your goals. We will show you how to bring the winged ones into all your relationships, dreams, healing, and recovery. Our angels end the book with their inspiring visions of how we can dance with them into the twenty-first century.

Angels are intelligent beings, capable of feelings, yet a different species, who have their existence on a slightly finer vibrational frequency from the one to which our physical senses are tuned. This means we can’t perceive them ordinarily with our eyes or ears, but they can perceive us. Our realities interpenetrate one another—with their reality encompassing and enfolding ours.

The word angel is a generic name for the collective group of beings—citizens of “inner space”—whose responsibilities include the harmonious organization of the inhabited universe. Some people believe that angels are the thoughts of God, while others hold that they are the creation of the Divine Mother Spirit. A relatively small number of this vast multitude is immediately concerned with humanity and our planet. Among these are our closest companions—-our guardian angels—and also the many millions of angels who tend our planetary reality. Our research has made it clear to us that there are angels who watch over virtually every aspect of human activity.

For example, we were given an angel to help us in the creation and writing of this book. It’s hard to imagine how this all could have worked without Abigrael’s skillful mediation. Abigrael is indeed its name, which immediately brings us to the first strangeness we encounter when communing with an angel. Angels are genderless. Two of us, for instance, perceive Abigrael as female, yet for the third it is unquestionably male. Angels are androgynous. They have both male and female qualities along with their individual characteristics.

This underlines a most important fact to be borne in mind while reading this book: There is no correct way to perceive angels. They come to us very much on their own terms, appearing to us in ways that are highly personal to each individual. They are here to help us raise our loving understanding and they connect with us at the highest level at which we are capable of functioning.

Contact and conversation with your angel is filled with all the tenderness, love, and wonderment of discovering a best friend—known forever, but not seen in years. Talking with angels is an entirely natural relationship, although over the centuries it’s become obscured by the belief that if you can’t see something or touch it—it isn’t real.

Now, however, at a time when we need help more than ever before, the angels are stepping forward once again. Interestingly, they tell us that it is because of reorganizations within their own domain that they are receiving instructions to make closer contact with us. Just as we are preparing ourselves for the enormous changes ahead, so the angels tell us that they are also evolving. As above, so below.

Their closer presence is deeply encouraging—just the helping hand for which so many of us have been praying. The angels are here. They are with us whether we believe in them or not. The universe works on a need-to-know basis; when we ask we are answered. In talking to our angels we extend and expand our capacity for growth and transformation—and move closer to our destiny.

• HOW DO ANGELS FUNCTION? •

A clue lies in the word angel itself, derived from the Greek word angelos and meaning messenger. Angels are messengers of our Creator. Within them they contain the basic patterns of creation that become manifest in our three-dimensional world. They are literally messengers who are themselves the message.

Angels work with our souls, in conjunction with Universal Mind, to help us raise our sights and spirits by reminding us of the truth, beauty, and goodness that exist within everything. By invoking our angels to help us accomplish mundane as well as inspired tasks, we can be confident that all will proceed according to Higher Will, not just ours alone. Through this act of cooperation, we lose our sense of isolation. We begin to truly comprehend that we’re not alone, not unaided; that there is help and guidance all around us. And we start opening to the state of gratitude in which miracles can occur. 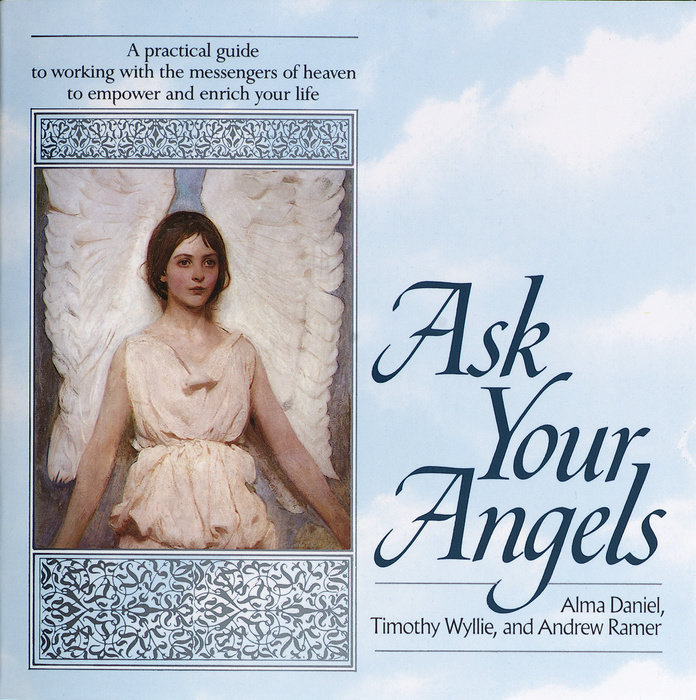