Published in 1975, Ragtime changed our very concept of what a novel could be. An extraordinary tapestry, Ragtime captures the spirit of America in the era between the turn of the century and the First World War.

The story opens in 1906 in New Rochelle, New York, at the home of an affluent American family. One lazy Sunday afternoon, the famous escape artist Harry Houdini swerves his car into a telephone pole outside their house. And almost magically, the line between fantasy and historical fact, between real and imaginary characters, disappears. Henry Ford, Emma Goldman, J. P. Morgan, Evelyn Nesbit, Sigmund Freud, and Emiliano Zapata slip in and out of the tale, crossing paths with Doctorow's imagined family and other fictional characters, including an immigrant peddler and a ragtime musician from Harlem whose insistence on a point of justice drives him to revolutionary violence.

An excerpt from Ragtime

In 1902 Father built a house at the crest of the Broadview Avenue hill in New Rochelle, New York. It was a three-story brown shingle with dormers, bay windows and a screened porch. Striped awnings shaded the windows. The family took possession of this stout manse on a sunny day in June and it seemed for some years thereafter that all their days would be warm and fair. The best part of Father's income was derived from the manufacture of flags and buntings and other accoutrements of patriotism, including fireworks. Patriotism was a reliable sentiment in the early 1900's. Teddy Roosevelt was President. The population customarily gathered in great numbers either out of doors for parades, public concerts, fish fries, political picnics, social outings, or indoors in meeting halls, vaudeville theatres, operas, ballrooms. There seemed to be no entertainment that did not involve great swarms of people. Trains and steamers and trolleys moved them from one place to another. That was the style, that was the way people lived. Women were stouter then. They visited the fleet carrying white parasols. Everyone wore white in summer. Tennis racquets were hefty and the racquet faces elliptical. There was a lot of sexual fainting. There were no Negroes. There were no immigrants. On Sunday afternoon, after dinner, Father and Mother went upstairs and closed the bedroom door. Grandfather fell asleep on the divan in the parlor. The Little Boy in the sailor blouse sat on the screened porch and waved away the flies. Down at the bottom of the hill Mother's Younger Brother boarded the streetcar and rode to the end of the line. He was a lonely, withdrawn young man with blond moustaches, and was thought to be having difficulty finding himself. The end of the line was an empty field of tall marsh grasses. The air was salt. Mother's Younger Brother in his white linen suit and boater rolled his trousers and walked barefoot in the salt marshes. Sea birds started and flew up. This was the time in our history when Winslow Homer was doing his painting. A certain light was still available along the Eastern seaboard. Homer painted the light. It gave the sea a heavy dull menace and shone coldly on the rocks and shoals of the New England coast. There were unexplained shipwrecks and brave towline rescues. Odd things went on in lighthouses and in shacks nestled in the wild beach plum. Across America sex and death were barely distinguishable. Runaway women died in the rigors of ecstasy. Stories were hushed up and reporters paid off by rich families. One read between the lines of the journals and gazettes. In New York City the papers were full of the shooting of the famous architect Stanford White by Harry K. Thaw, eccentric scion of a coke and railroad fortune. Harry K. Thaw was the husband of Evelyn Nesbit, the celebrated beauty who had once been Stanford White's mistress. The shooting took place in the roof garden of the Madison Square Garden on 26th Street, a spectacular block-long building of yellow brick and terra cotta that White himself had designed in the Sevillian style. It was the opening night of a revue entitled Mamzelle Champagne, and as the chorus sang and danced the eccentric scion wearing on this summer night a straw boater and heavy black coat pulled out a pistol and shot the famous architect three times in the head. On the roof. There were screams. Evelyn fainted. She had been a well-known artist's model at the age of fifteen. Her underclothes were white. Her husband habitually whipped her. She happened once to meet Emma Goldman, the revolutionary. Goldman lashed her with her tongue. Apparently there were Negroes. There were immigrants. And though the newspapers called the shooting the Crime of the Century, Goldman knew it was only 1906 and there were ninety-four years to go.

Mother's Younger Brother was in love with Evelyn Nesbit. He had closely followed the scandal surrounding her name and had begun to reason that the death of her lover Stanford White and the imprisonment of her husband Harry K. Thaw left her in need of the attentions of a genteel middle-class young man with no money. He thought about her all the time. He was desperate to have her. In his room pinned on the wall was a newspaper drawing by Charles Dana Gibson entitled 'The Eternal Question.' It showed Evelyn in profile, with a profusion of hair, one thick strand undone and fallen in the configuration of a question mark. Her downcast eye was embellished with a fallen ringlet that threw her brow in shadow. Her nose was delicately upturned. Her mouth was slightly pouted. Her long neck curved like a bird taking wing. Evelyn Nesbit had caused the death of one man and wrecked the life of another and from that he deduced that there was nothing in life worth having, worth wanting, but the embrace of her thin arms.

The afternoon was a blue haze. Tidewater seeped into his footprints. He bent down and found a perfect shell specimen, a variety not common to western Long Island Sound. It was a voluted pink and amber shell the shape of a thimble, and what he did in the hazy sun with the salt drying on his ankles was to throw his head back and drink the minute amount of sea water in the shell. Gulls wheeled overhead, crying like oboes, and behind him at the land end of the marsh, out of sight behind the tall grasses, the distant bell of the North Avenue streetcar tolled its warning.

Across town the little boy in the sailor suit was suddenly restless and began to measure the length of the porch. He trod with his toe upon the runner of the cane-backed rocking chair. He had reached that age of knowledge and wisdom in a child when it is not expected by the adults around him and consequently goes unrecognized. He read the newspaper daily and was currently following the dispute between the professional baseballers and a scientist who claimed that the curve ball was an optical illusion. He felt that the circumstances of his family's life operated against his need to see things and to go places. For instance he had conceived an enormous interest in the works and career of Harry Houdini, the escape artist. But he had not been taken to a performance. Houdini was a headliner in the top vaudeville circuits. His audiences were poor people--carriers, peddlers, policemen, children. His life was absurd. He went all over the world accepting all kinds of bondage and escaping. He was roped to a chair. He escaped. He was chained to a ladder. He escaped. He was handcuffed, his legs were put in irons, he was tied up in a strait jacket and put in a locked cabinet. He escaped. He escaped from bank vaults, nailed-up barrels, sewn mailbags; he escaped from a zinc-lined Knabe piano case, a giant football, a galvanized iron boiler, a rolltop desk, a sausage skin. His escapes were mystifying because he never damaged or appeared to unlock what he escaped from. The screen was pulled away and there he stood disheveled but triumphant beside the inviolate container that was supposed to have contained him. He waved to the crowd. He escaped from a sealed milk can filled with water. He escaped from a Siberian exile van. From a Chinese torture crucifix. From a Hamburg penitentiary. From an English prison ship. From a Boston jail. He was chained to automobile tires, water wheels, cannon, and he escaped. He dove manacled from a bridge into the Mississippi, the Seine, the Mersey, and came up waving. He hung upside down and strait-jacketed from cranes, biplanes and the tops of buildings. He was dropped into the ocean padlocked in a diving suit fully weighted and not connected to an air supply, and he escaped. He was buried alive in a grave and could not escape, and had to be rescued. Hurriedly, they dug him out. The earth is too heavy, he said gasping. His nails bled. Soil fell from his eyes. He was drained of color and couldn't stand. His assistant threw up. Houdini wheezed and sputtered. He coughed blood. They cleaned him off and took him back to the hotel. Today, nearly fifty years since his death, the audience for escapes is even larger.

The little boy stood at the end of the porch and fixed his gaze on a bluebottle fly traversing the screen in a way that made it appear to be coming up the hill from North Avenue. The fly flew off. An automobile was coming up the hill from North Avenue. As it drew closer he saw it was a black 45-horsepower Pope-Toledo Runabout. He ran along the porch and stood at the top of the steps. The car came past his house, made a loud noise and swerved into the telephone pole. The little boy ran inside and called upstairs to his mother and father. Grandfather woke with a start. The boy ran back to the porch. The driver and the passenger were standing in the street looking at the car: it had big wheels with pneumatic tires and wooden spokes painted in black enamel. It had brass headlamps in front of the radiator and brass sidelamps over the fenders. It had tufted upholstery and double side entrances. It did not appear to be damaged. The driver was in livery. He folded back the hood and a geyser of white steam shot up with a hiss.

E. L. Doctorow’s works of fiction include Andrew’s Brain, Homer & Langley, The March, Billy Bathgate, Ragtime, The Book of Daniel, City of God, Welcome to Hard Times, Loon Lake, World’s Fair, The Waterworks, and All the Time in the World. Among his honors are the National Book Award, three National Book Critics Circle awards, two PEN/Faulkner awards, and the presidentially conferred National Humanities Medal. In 2009 he was shortlisted for the Man Booker International Prize, honoring a writer’s lifetime achievement in fiction, and in 2012 he was inducted into the New York State Writers Hall of Fame and won the PEN/Saul Bellow Award for Achievement in American Fiction, which is given to an author whose “scale of achievement over a sustained career [places] him in the highest rank of American literature.” In 2013 he received the Gold Medal for Fiction from the American Academy of Arts and Letters and the Medal for Distinguished Contribution to American Letters from the National Book Foundation. Doctorow died in 2015. 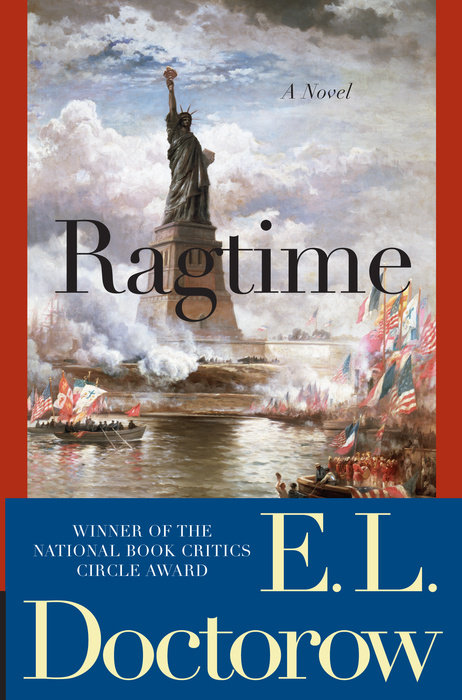