Xanth was the enchanted land where magic ruled—where every citizen had a special spell only he could cast. It was a land of centaurs and dragons and basilisks.

For Bink of North Village, however, Xanth was no fairy tale. He alone had no magic. And unless he got some—and got some fast!—he would be exiled. Forever. But the Good Magician Humfrey was convinced that Bink did indeed have magic. In fact, both Beauregard the genie and the magic wall chart insisted that Bink had magic. Magic as powerful as any possessed by the King or by Good Magician Humfrey—or even by the Evil Magician Trent.

Be that as it may, no one could fathom the nature of Bink’s very special magic. Bink was in despair. This was even worse than having no magic at all . . . and he would still be exiled!

An excerpt from A Spell for Chameleon

a small lizard perched on a brown stone. Feeling threatened by the approach of human beings along the path, it metamorphosed into a stingray beetle, then into a stench-puffer, then into a fiery salamander.

Bink smiled. These conversions weren’t real. It had assumed the forms of obnoxious little monsters, but not their essence. It could not sting, stink, or burn. It was a chameleon, using its magic to mimic creatures of genuine threat.

Yet as it shifted into the form of a basilisk it glared at him with such ferocity that Bink’s mirth abated. If its malice could strike him, he would be horribly dead.

Then abruptly a silent moth hawk swooped down from the sky and caught the chameleon in its beak. There was a thin scream of anguish as the lizard convulsed; then it dangled limply as the hawk ascended. The chameleon, despite all its pretensions, was dead. Even while trying to threaten Bink, it had been destroyed by another agency.

This realization continued to percolate through Bink’s emotion. The chameleon was harmless—but most of untamed Xanth was not. Was this some twisted omen, a small suggestion of a dire fate awaiting him? Omens were serious business; they always came true, but usually were misinterpreted until too late. Was Bink fated to die brutally—or was some enemy of his?

He had, so far as he knew, no enemies.

The golden sun of Xanth shone through the magic Shield, striking sparkles from the trees. All plants had their enchantments, but no spell could eliminate the need for light, water, and healthy soil. Instead, magic was used to make these necessities of the vegetable kingdom more available, and to protect the plants from destruction, unless they were overpowered by stronger magic or simple bad luck, like the chameleon.

Bink looked at the girl beside him as she stepped through a slanting sunbeam. He was no plant, but he too had needs, and even the most casual inspection of her made him aware of this. Sabrina was absolutely beautiful—and her beauty was completely natural. Other girls managed to enhance their appearance by cosmetics or padding or specialized spells, but beside Sabrina all other females looked somewhat artificial. She was no enemy!

They came to Lookout Rock. This was not a particularly lofty promontory, but its situational magic made it seem more elevated than it was, so that they could look down on a quarter slice of Xanth. This was a land of multicolored vegetation, small pretty lakes, and deceptively quiet fields of flowers, ferns, and crops. Even as Bink watched, one of the lakes expanded slightly, making itself seem cooler and deeper, a better place for a swim.

Bink wondered briefly about this, as he often did. He had an unruly mind, which constantly pestered him with questions for which there were no ready answers. As a child he had driven parents and friends almost to distraction with his “Why is the sun yellow?” “Why do ogres crunch bones?” “Why can’t sea monsters cast spells?” and similarly infantile prattle. No wonder he had soon been hustled away to centaur school. Now he had learned to control his mouth, but not his brain, and so he let it run on in silence.

Animate spells he could understand, such as those of the unfortunate chameleon; they facilitated comfort, survival, or image for living creatures. But why should inanimate things have magic? Did a lake care who swam in it? Well, maybe so; a lake was an ecological unit, and the community of living things within it might have a mutual interest in promoting it. Or a freshwater dragon might be responsible, luring in prey. Dragons were the most varied and dangerous life forms of Xanth; species occupied air, earth, and water, and a number breathed fire. One thing they all had in common: good appetite. Pure chance might not bring in enough fresh meat.

But what about Lookout Rock? It was bare, without even lichen, and hardly beautiful. Why should it want company? And if it did, why not make itself more handsome, instead of remaining gray and drab? People did not come here to admire the rock, but to admire the rest of Xanth. Such a spell seemed self-defeating.

Then Bink stubbed his toe on a sharp fragment of stone. He was standing on a cracked-rock terrace, formed generations ago by the breaking up of a pretty-colored boulder and—

There it was! That other boulder, which must have been close to Lookout Rock and of similar size, had been fragmented to make this path and terrace, losing its identity. Lookout Rock had survived. Nobody would break it up, because it would make an ugly path, and its unselfish magic made it useful as it stood. One minor mystery solved.

Still, there were philosophical considerations, his insatiable mind insisted. How could an inanimate thing think or have feelings? What was survival to a rock? A boulder was merely the fragment of a prior layer of rock; why should it have a personal identity if the bedrock didn’t? Still, the same question could be asked of a man: he had been formed from the tissues of the plants and animals he consumed, yet he had a separate—

“What did you wish to talk to me about, Bink?” Sabrina inquired demurely.

As if she didn’t know. But as his mind formed the necessary words, his mouth balked. He knew what her answer had to be. No one could remain in Xanth after his twenty-fifth birthday unless he demonstrated a magic talent. Bink’s own critical birthday was barely a month away. He was no child now. How could she marry a man who was so soon to be exiled?

Why hadn’t he thought of that before bringing her out here? He could only embarrass himself! Now he had to say something to her, or suffer further embarrassment, making it awkward for her as well. “I just wanted to see your—your—”

“See my what?” she inquired with an arch lift of eyebrow.

He felt the heat starting up his neck. “Your holograph,” he blurted. There was much more of her he longed to see, and to touch, but that could come only after marriage. She was that sort of girl, and it was part of her appeal. The girls who had it didn’t need to put it on casual display.

Well, not quite true. He thought of Aurora, who certainly had it, yet who—

“Bink, there is a way,” Sabrina said.

He glanced sidelong at her, then quickly away, confused. She couldn’t be suggesting—

“What?” He had been on quite a different track, no credit to his willful mind.

“Humfrey knows a hundred spells. Maybe one of them—I’m sure he could find out what your talent is. Then everything would be all right.”

Oh. “But he charges a year’s service for a single spell,” Bink protested. “I have only a month.” But that was not quite accurate; if the Magician identified a talent for Bink, then he would not be exiled, and he would have a year available. He was deeply touched by Sabrina’s faith in him. She did not say what others said: that he had no magic. She did him the immense courtesy of choosing to believe that his magic merely remained undiscovered.

Perhaps it was that faith that had first attracted him to her. Certainly she was beautiful and intelligent and talented, a prize by any definition. But she could have been much less in all categories and still been his—

“A year is not so long,” Sabrina murmured. “I would wait.”

Bink stared down at his hands, pondering. His right hand was normal, but he had lost the middle finger of his left hand in a childhood accident. It had not even been the result of inimical magic; he had been playing with a cleaver, holding down a stalk of coilgrass while he chopped, pretending it was the tail of a dragon. After all, a boy could not start to practice too early for the serious side of life. The grass had twitched out of his grip as he swung, and he had grabbed for it, and the cleaver had come down hard on his extended finger.

It had hurt, but the worst of it was that because he was not supposed to play with the cleaver, he had not dared scream or tell of his injury. He had controlled himself with extreme effort and suffered in silence. He had buried the finger, and managed to hide his mutilation by keeping his hand closed for several days. When the truth finally came out, it was too late for a restorative spell; the finger was rotted and could not be reattached. A strong-enough spell could have attached it—but it would have remained a zombie finger.

He had not been punished. His mother, Bianca, believed he had learned his lesson—and he had, he had! Next time he played with a cleaver on the sly he would watch where his fingers were. His father seemed privately pleased that Bink had shown so much courage and tenacity in adversity, even in his wrongdoing, “The lad’s got nerve,” Roland had said. “Now if only he had magic—”

Bink jerked his eyes away from the hand. That had been fifteen years ago. Suddenly a year seemed short indeed. One year of service—in exchange for a lifetime with Sabrina. It was a bargain.

Yet—suppose he had no magic? Was he to pay a year of his life to verify the certainty of being thrust into the drear realm of the null-talented? Or would it be better to accept exile, preserving the useless hope that he did have a latent talent?

Piers Anthony is one of the world's most popular fantasy authors, and a New York Times bestseller twenty-one times over. His Mode novels have been read and loved by millions of readers around the world, and he daily receives hundreds of letters from his devoted fans. 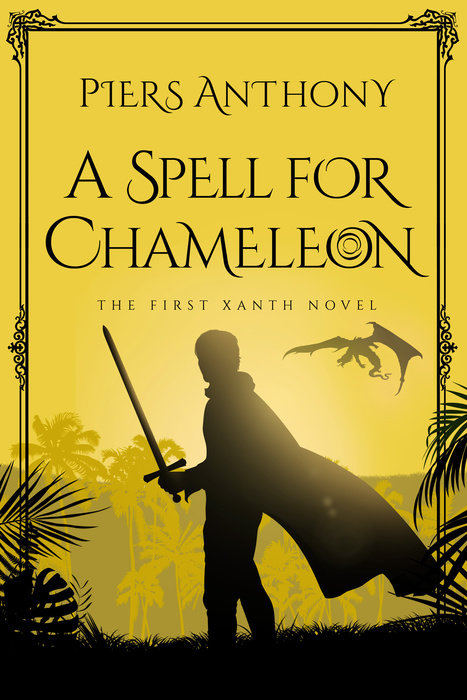