It’s been more than twenty years since Eve Ensler’s international sensation The Vagina Monologues gave birth to V-Day, the radical, global grassroots movement to end violence against women and girls. This special edition features six never-before-published monologues, a new foreword by National Book Award winner Jacqueline Woodson, a new introduction by the author, and a new afterword by One Billion Rising director Monique Wilson on the stage phenomenon’s global impact. Witty and irreverent, compassionate and wise, this award-winning masterpiece gives voice to real women’s deepest fantasies, fears, anger, and pleasure, and calls for a world where all women are safe, equal, free, and alive in their bodies.

Praise for The Vagina Monologues

“Probably the most important piece of political theater of the last decade.”—The New York Times

“This play changed the world. Seeing it changed my soul. Performing in it changed my life. I am forever indebted to Eve Ensler and the transformative legacy of this play.”—Kerry Washington

“Spellbinding, funny, and almost unbearably moving . . . both a work of art and an incisive piece of cultural history, a poem and a polemic, a performance and a balm and a benediction.”—Variety

“Extraordinary . . . a compelling rhapsody of the female essence.”—Chicago Tribune

An excerpt from The Vagina Monologues

In the first place, it's not so easy even to find your vagina. Women go weeks, months, sometimes years without looking at it. I interviewed a high-powered businesswoman who told me she was too busy; she didn't have the time. Looking at your vagina, she said, is a full day's work. You have to get down there on your back in front of a mirror that's standing on its own, full-length preferred. You've got to get in the perfect position, with the perfect light, which then is shadowed somehow by the mirror and the angle you're at. You get all twisted up. You're arching your head up, killing your back. You're exhausted by then. She said she didn't have the time for that. She was busy.

So I decided to talk to women about their vaginas, to do vagina interviews, which became vagina monologues. I talked with over two hundred women. I talked to older women, young women, married women, single women, lesbians, college professors, actors, corporate professionals, sex workers, African American women, Hispanic women, Asian American women, Native American
women, Caucasian women, Jewish women. At first women were reluctant to talk. They were a little shy. But once they got going, you couldn't stop them. Women secretly love to talk about their vaginas. They get very excited, mainly because no one's ever asked them before.

Let's just start with the word "vagina." It sounds like an infection at best, maybe a medical instrument: "Hurry, Nurse, bring me the vagina." "Vagina." "Vagina." Doesn't matter how many times you say it, it never sounds like a word you want to say. It's a totally ridiculous, completely
unsexy word. If you use it during sex, trying to be politically correct-"Darling, could you stroke my vagina?"-you kill the act right there.

I'm worried about vaginas, what we call them and don't call them.

Some of the monologues are close to verbatim interviews, some are composite interviews, and with some I just began with the seed of an interview and had a good time. This monologue is pretty much the way I heard it. Its subject, however, came up in every interview, and often it was fraught. The subject being

You cannot love a vagina unless you love hair. Many people do not love hair. My first and only husband hated hair. He said it was cluttered and dirty. He made me shave my vagina. It looked puffy and exposed and like a little girl. This excited him. When he made love to me, my vagina felt the way a beard must feel. It felt good to rub it, and painful. Like scratching a mosquito bite. It felt like it was on fire. There were screaming red bumps. I refused to shave it again. Then my husband had an affair. When we went to marital therapy, he said he screwed around because I wouldn't
please him sexually. I wouldn't shave my vagina. The therapist had a thick German accent and gasped between sentences to show her empathy. She asked me why I didn't want to please my husband. I told her I thought it was weird. I felt little when my hair was gone down there, and I couldn't help talking in a baby voice, and the skin got irritated and even calamine lotion wouldn't help it. She told me marriage was a compromise. I asked her if shaving my vagina would stop him from screwing around. I asked her if she'd had many cases like this before. She said that questions diluted the process. I needed to jump in. She was sure it was a good beginning.

This time, when we got home, he got to shave my vagina. It was like a therapy bonus prize. He clipped it a few times, and there was a little blood in the bathtub. He didn't even notice it, 'cause he was so happy shaving me. Then, later, when my husband was pressing against me, I could feel his spiky sharpness sticking into me, my naked puffy vagina. There was no protection. There was no fluff.

I realized then that hair is there for a reason-it's the leaf around the flower, the lawn around the house. You have to love hair in order to love the vagina. You can't pick the parts you want. And besides, my husband never stopped screwing around.

I asked all the women I interviewed the same questions and then I picked my favorite answers. Although I must tell you, I've never heard an answer I didn't love. I asked women:

"If your vagina got dressed, what would it wear?"

A large hat full of flowers.

An electrical shock device to keep unwanted strangers away.

Purple feathers and twigs and shells.

Eve Ensler is an internationally bestselling author and Tony Award–winning playwright whose theatrical works include the Obie Award–winning The Vagina Monologues, as well as Necessary Targets, The Good Body, and Emotional Creature. She is the author of the political memoir Insecure at Last, the New York Times bestseller I Am an Emotional Creature, and a critically acclaimed memoir, In the Body of the World, which she has adapted for the stage and will premiere at Manhattan Theatre Club in January 2018. Ensler is the founder of V-Day, the global movement to end violence against women and girls that has raised more than $100 million for local groups and activists. She is also the founder of One Billion Rising, the biggest global mass action campaign to end violence against women in human history, which is active in more than two hundred countries, and the co-founder of the City of Joy, the revolutionary leadership center for survivors of gender violence in the Democratic Republic of Congo. 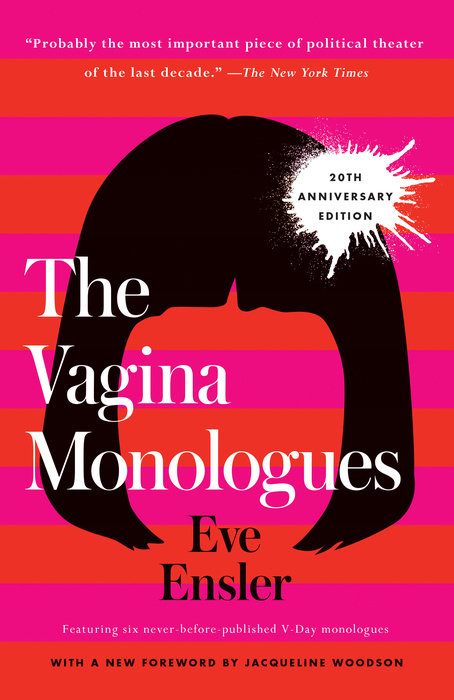