From the Modern Library’s new set of beautifully repackaged hardcover classics by William Faulkner—also available are Snopes, As I Lay Dying, Light in August, Absalom, Absalom!, and Selected Short Stories

The Sound and the Fury, first published in 1929, is perhaps William Faulkner’s greatest book. It was immediately praised for its innovative narrative technique, and comparisons were made with Joyce and Dostoyevsky, but it did not receive popular acclaim until the late forties, shortly before Faulkner received the Nobel Prize for Literature.

The novel reveals the story of the disintegration of the Compson family, doomed inhabitants of Faulkner’s mythical Yoknapatawpha County, through the interior monologues of the idiot Benjy and his brothers, Quentin and Jason. Featuring a new Foreword by Marilynne Robinson, this edition follows the text corrected in 1984 by Faulkner expert Noel Polk and corresponds as closely as possible to the author’s original intentions. Included also is the Appendix that Faulkner wrote for The Portable Faulkner in 1946, which he called the “key to the whole book.”

An excerpt from The Sound and the Fury

"Here, caddie." He hit. They went away across the pasture. I held to the fence and watched them going away.

"Listen at you, now." Luster said. "Aint you something, thirty three years old, going on that way. After I done went all the way to town to buy you that cake. Hush up that moaning. Aint you going to help me find that quarter so I can go to the show tonight."

They were hitting little, across the pasture. I went back along the fence to where the flag was. It flapped on the bright grass and the trees.

"Come on." Luster said. "We done looked there. They aint no more coming right now. Les go down to the branch and find that quarter before them niggers finds it."

It was red, flapping on the pasture. Then there was a bird slanting and tilting on it. Luster threw. The flag flapped on the bright grass and the trees. I held to the fence.

"Shut up that moaning." Luster said. "I cant make them come if they aint coming, can I. If you dont hush up, mammy aint going to have no birthday for you. If you dont hush, you know what I going to do. I going to eat that cake all up. Eat them candles, too. Eat all them thirty three candles. Come on, les go down to the branch. I got to find my quarter. Maybe we can find one of they balls. Here. Here they is. Way over yonder. See." He came to the fence and pointed his arm. "See them. They aint coming back here no more. Come on."

We went along the fence and came to the garden fence, where our shadows were. My shadow was higher than Luster's on the fence. We came to the broken place and went through it.

"Wait a minute." Luster said. "You snagged on that nail again. Cant you never crawl through here without snagging on that nail."

Caddy uncaught me and we crawled through. Uncle Maury said to not let anybody see us, so we better stoop over, Caddy said. Stoop over, Benjy. Like this, see. We stooped over and crossed the garden, where the flowers rasped and rattled against us. The ground was hard. We climbed the fence, where the pigs were grunting and snuffing. I expect they're sorry because one of them got killed today, Caddy said. The ground was hard, churned and knotted.

Keep your hands in your pockets, Caddy said. Or they'll get froze. You dont want your hands froze on Christmas, do you.

"It's too cold out there." Versh said. "You dont want to go out doors."

"What is it now." Mother said.

"He want to go out doors." Versh said.

"You, Benjamin." Mother said. "If you dont be good, you'll have to go to the kitchen."

"Mammy say keep him out the kitchen today." Versh said. "She say she got all that cooking to get done."

"Let him go, Caroline." Uncle Maury said. "You'll worry yourself sick over him."

"I know it." Mother said. "It's a judgment on me. I sometimes wonder."

"I know, I know." Uncle Maury said. "You must keep your strength up. I'll make you a toddy."

"It just upsets me that much more." Mother said. "Dont you know it does."

"You'll feel better." Uncle Maury said. "Wrap him up good, boy, and take him out for a while."

"Please hush." Mother said. "We're trying to get you out as fast as we can. I dont want you to get sick."

Versh put my overshoes and overcoat on and we took my cap and went out. Uncle Maury was putting the bottle away in the sideboard in the diningroom.

"Keep him out about half an hour, boy." Uncle Maury said. "Keep him in the yard, now."

We went out doors. The sun was cold and bright.

"Where you heading for." Versh said. "You dont think you going to town, does you." We went through the rattling leaves. The gate was cold. "You better keep them hands in your pockets." Versh said. "You get them froze onto that gate, then what you do. Whyn't you wait for them in the house." He put my hands into my pockets. I could hear him rattling in the leaves. I could smell the cold. The gate was cold.

"Here some hickeynuts. Whooey. Git up that tree. Look here at this squirl, Benjy."

I couldn't feel the gate at all, but I could smell the bright cold.

"You better put them hands back in your pockets."

Caddy was walking. Then she was running, her book-satchel swinging and jouncing behind her.

"I told him to keep them in his pockets." Versh said. "Holding on to that ahun gate."

"Did you come to meet Caddy," she said, rubbing my hands. "What is it. What are you trying to tell Caddy." Caddy smelled like trees and like when she says we were asleep.

What are you moaning about, Luster said. You can watch them again when we get to the branch. Here. Here's you a jimson weed. He gave me the flower. We went through the fence, into the lot.

"What is it." Caddy said. "What are you trying to tell Caddy. Did they send him out, Versh."

"Couldn't keep him in." Versh said. "He kept on until they let him go and he come right straight down here, looking through the gate."

"What is it." Caddy said. "Did you think it would be Christmas when I came home from school. Is that what you thought. Christmas is the day after tomorrow. Santy Claus, Benjy. Santy Claus. Come on, let's run to the house and get warm." She took my hand and we ran through the bright rustling leaves. We ran up the steps and out of the bright cold, into the dark cold. Uncle Maury was putting the bottle back in the sideboard. He called Caddy. Caddy said,

We went to the fire. Mother said,

"Take his overcoat and overshoes off." Mother said. "How many times do I have to tell you not to bring him into the house with his overshoes on."

"Wait, Versh. Cant he go out again, Mother. I want him to go with me."

"I think you'd both better stay in." Mother said. "It's getting colder, Dilsey says."

"Nonsense." Uncle Maury said. "She's been in school all day. She needs the fresh air. Run along, Candace."

"Then why did you mention it before him." Mother said. "Why did you come in here. To give him some excuse to worry me again. You've been out enough today. I think you'd better sit down here and play with him."

"Let them go, Caroline." Uncle Maury said. "A little cold wont hurt them. Remember, you've got to keep your strength up."

"I know." Mother said. "Nobody knows how I dread Christmas. Nobody knows. I am not one of those women who can stand things. I wish for Jason's and the children's sakes I was stronger."

"You must do the best you can and not let them worry you." Uncle Maury said. "Run along, you two. But dont stay out long, now. Your mother will worry."

"Yes, sir." Caddy said. "Come on, Benjy. We're going out doors again." She buttoned my coat and we went toward the door.

"Are you going to take that baby out without his overshoes." Mother said. "Do you want to make him sick, with the house full of company."

We went back. "You must think." Mother said. Hold still now Versh said. He put my overshoes on. "Someday I'll be gone, and you'll have to think for him." Now stomp Versh said. "Come here and kiss Mother, Benjamin."

Caddy took me to Mother's chair and Mother took my face in her hands and then she held me against her.

"All right." Versh said. "I aint going out in that cold for no fun." He went on and we stopped in the hall and Caddy knelt and put her arms around me and her cold bright face against mine. She smelled like trees.

Cant you shut up that moaning and slobbering, Luster said. Aint you shamed of yourself, making all this racket. We passed the carriage house, where the carriage was. It had a new wheel.

"Git in, now, and set still until your maw come." Dilsey said. She shoved me into the carriage. T. P. held the reins. "Clare I dont see how come Jason wont get a new surrey." Dilsey said. "This thing going to fall to pieces under you all some day. Look at them wheels."

Mother came out, pulling her veil down. She had some flowers. 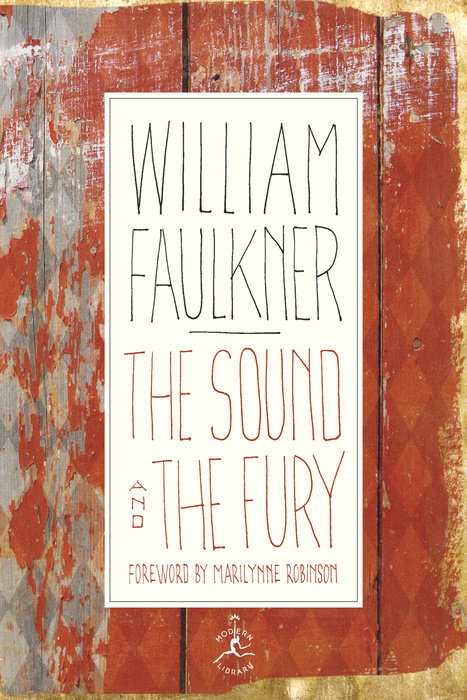