The Foundations of Screenwriting

Hollywood’s script guru teaches you how to write a screenplay in “the ‘bible’ of screenwriting” (The New York Times)—now celebrating forty years of screenwriting success!

Syd Field’s books on the essential structure of emotionally satisfying screenplays have ignited lucrative careers in film and television since 1979. In this revised edition of his premiere guide, the underpinnings of successful onscreen narratives are revealed in clear and encouraging language that will remain wise and practical as long as audiences watch stories unfold visually—from hand-held devices to IMAX to virtual reality . . . and whatever comes next.

As the first person to articulate common structural elements unique to successful movies, celebrated producer, lecturer, teacher and bestselling author Syd Field has gifted us a classic text. From concept to character, from opening scene to finished script, here are fundamental guidelines to help all screenwriters—novices and Oscar-winners—hone their craft and sell their work.

In Screenplay, Syd Field can help you discover:
• Why the first ten pages of every script are crucial to keeping professional readers’ interest
• How to visually “grab” these influential readers from page one, word one
• Why structure and character are the basic components of all narrative screenplays
• How to adapt a novel, a play, or an article into a saleable script
• Tips on protecting your work—three ways to establish legal ownership of screenplays
• Vital insights on writing authentic dialogue, crafting memorable characters, building strong yet flexible storylines (form, not formula), overcoming writer's block, and much more

Syd Field is revered as the original master of screenplay story structure, and this guide continues to be the industry’s gold standard for learning the foundations of screenwriting.

An excerpt from Screenplay


What Is a Screenplay?

“Suppose you’re in your office. . . . A pretty stenographer you’ve seen before comes into the room and you watch her. . . . She takes off her gloves, opens her purse and dumps it out on the table. . . . She has two dimes and a nickel—and a cardboard match box. She leaves the nickel on the desk, puts the two dimes back into her purse and takes her black gloves to the stove. . . . Just then your telephone rings. The girl picks it up, says hello—listens—and says deliberately into the phone, “I’ve never owned a pair of black gloves in my life.” She hangs up . . . and you glance around very suddenly and see another man in the office, watching every move the girl makes. . . .”

“I don’t know,” said Stahr. “I was just making pictures.”

In the summer of 1937, F. Scott Fitzgerald, drinking far too much, deeply in debt, and drowning in the suffocating well of despair, moved to Hollywood seeking new beginnings, hoping to reinvent himself by writing for the movies. The author of The Great Gatsby, Tender Is the Night, This Side of Paradise, and the uncompleted The Last Tycoon, perhaps America’s greatest novelist, was, as one friend put it, seeking redemption.

During the two and a half years he spent in Hollywood, he took the craft of screenwriting “very seriously,” says one noted Fitzgerald authority: “It’s heartbreaking to see how much effort he put into it.” Fitzgerald approached every screenplay as if it were a novel and often wrote long backstories for each of the main characters before putting one word of dialogue down on paper.

Despite all the preparation he put into each assignment, he was obsessed with finding the answer to a question that haunted him continuously: What makes a good screenplay? Billy Wilder once compared Fitzgerald to “a great sculptor who is hired to do a plumbing job. He did not know how to connect the pipes so the water could flow.”

Throughout his Hollywood years, he was always trying to find the “balance” between the words spoken and the pictures seen. During this time, he received only one screen credit, adapting the novel Three Comrades by Erich Maria Remarque (starring Robert Taylor and Margaret Sullavan), but Joseph L. Mankiewicz eventually rewrote his script. He worked on rewrites for several other movies, including a disastrous week on Gone With the Wind (he was forbidden to use any words that did not appear in Margaret Mitchell’s novel), but after Three Comrades, all of his projects ended in fail- ure. One, a script for Joan Crawford called Infidelity, was left uncompleted, canceled because it dealt with the theme of adultery. Fitzgerald died in 1941, working on his last, unfinished novel, The Last Tycoon.

He died believing himself to be a failure.

I’ve always been intrigued by the journey of F. Scott Fitzgerald. What resonates with me the most is that he was constantly searching for the answer to what made a good screenplay. His overwhelming external circumstances—his wife Zelda’s institutionalization, his unmanageable debts and lifestyle, his excessive drinking—all fed into his insecurities about the craft of screenwriting. And make no mistake: Screenwriting is a craft, a craft that can be learned. Even though he worked excessively hard, and was disciplined and responsible, he failed to achieve the results he was so desperately striving for.

I don’t think there’s any one answer. But reading his books and writings and letters from this period, it seems clear that he was never exactly sure what a screenplay was; he always wondered whether he was “doing it right,” whether there were certain rules he had to follow in order to write a successful screenplay.

When I was studying at the University of California, Berkeley, as an English lit major, I read the first and second editions of Tender Is the Night for one of my classes. It is the story of a psychiatrist who marries one of his patients, who, as she slowly recovers, exhausts his vitality until he is “a man used up.” The book, the last one Fitzgerald completed, was considered technically faulty and was commercially unsuccessful.

In the first edition of the novel, Book I is written from the point of view of Rosemary Hoyt, a young actress who shares her obser- vations about meeting the circle that surrounds Dick and Nicole Diver. Rosemary is on the beach at Cap d’Antibes on the French Riviera, watching the Divers enjoying an outing on the sand. As she watches, she sees them as a beautiful couple who appear, at least from her point of view, to have everything going for them. They are, she thinks, the ideal couple. Rich, beautiful, intelligent, they look to be the embodiment of what everyone wants for himself or herself. But the second book of the novel focuses on the life of Dick and Nicole, and we learn that what we saw through Rosemary’s eyes was only the relationship they showed to the world; it was not really true. The Divers have major problems, which drain them emotionally and spiritually, and ultimately destroy them.

When the first edition of Tender Is the Night was published, sales were poor, and Fitzgerald thought he had probably been drinking too much and might have compromised his vision. But from his Hollywood experience, he came to believe he did not introduce his main characters early enough. “Its great fault,” Fitzgerald wrote of Tender Is the Night to his editor, Maxwell Perkins, “is that the true beginning—the young psychiatrist in Switzerland—is tucked away in the middle of the book.” He decided that when the second edition was printed, he would interchange the first section with the second and open the novel with Dick Diver in wartime Switzerland in order to explain the mystery about the Divers’ courtship and marriage. So he opened the book focusing on the main character, Dick Diver. But that didn’t work either, and Fitzgerald was crushed. The book was financially unsuccessful until many years later, when Fitzgerald’s genius was finally acknowledged.

What strikes me so vividly is what Fitzgerald didn’t see; his opening section focusing on how Rosemary saw the Divers was more cinematic than novelistic. It’s a great cinematic opening, setting up the characters as others see them, like an establishing shot; in this first edition, Fitzgerald was showing us how this model couple looked to the world, beautiful and rich, seeming to have everything. How we look to the outside world, of course, is a lot different from who we really are behind closed doors. My personal feeling is that it was Fitzgerald’s insecurity about the craft of screenwriting that drove him to change that great opening.

F. Scott Fitzgerald was an artist literally caught between two worlds, caught between his genius as a writer and his self-doubt and inability to express that genius in screenplay form.

Screenwriting is a definite craft, a definite art. Over the years, I’ve read thousands upon thousands of screenplays, and I always look for certain things. First, how does it look on the page? Is there plenty of white space, or are the paragraphs dense, too thick, the dialogue too long? Or is the reverse true: Is the scene description too thin, the dialogue too sparse? And this is before I read one word; this is just what it “looks” like on the page. You’d be surprised how many decisions are made in Hollywood by the way a screenplay looks—you can tell whether it’s been written by a professional or by someone who’ s still aspiring to be a professional.

Everybody is writing screenplays, from the waiter at your favorite bar or restaurant to the limo driver, the doctor, the lawyer, or the barista serving up the White Chocolate Dream Latte at the local Coffee Bean. Last year, more than seventy-five thousand screenplays were registered at the Writers Guild of America, West and East, and out of that number maybe four or five hundred scripts were actually produced.

What makes one screenplay better than another? There are many answers, of course, because each screenplay is unique. But if you want to sit down and spend six months to a year writing a screenplay, you first have to know what a screenplay is—what its nature is.

What is a screenplay? Is it a guide, or an outline, for a movie? A blueprint, or a diagram? Or maybe it’ s a series of images, scenes, and sequences strung together with dialogue and description, like pearls on a strand? Perhaps it’s simply the landscape of a dream?

Syd Field (1935–2013), the internationally renowned “guru of screenwriting,” was the author of eight bestselling books on the subject, including Screenplay, published in twenty-three languages and used in hundreds of colleges and universities nationwide and around the world. He was inducted into the Final Draft Hall of Fame in 2006 and was the first inductee into the Screenwriting Hall of Fame of the American Screenwriting Association. He was also a special consultant to the Film Preservation Project for the Getty Center.

The Foundations of Screenwriting 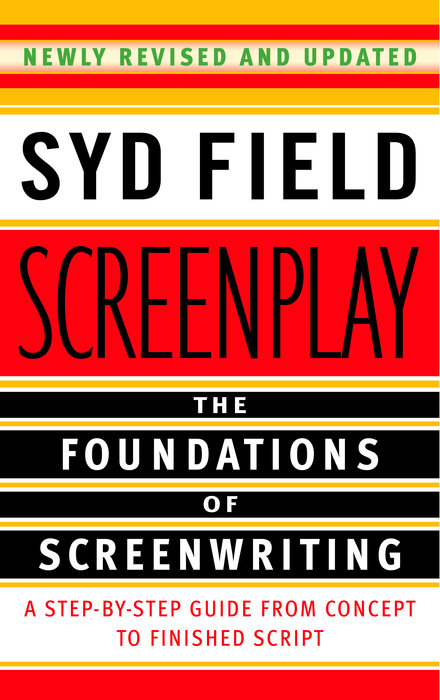