Who doesn’t love Naked Men? In Christi Barth’s irresistible series, a group of close-knit friends talk out their problems with naked honesty on a popular blog. Bonded by a high-school tragedy, they’re moving on from the past—and fighting for the future with strong and sassy women.

Griffin Montgomery helps people. As a teenager, he kept his best friends alive after their soccer team’s bus crashed in the Alps. Now, as a Coast Guard search and rescue pilot, he saves lives with reckless abandon—until he goes too far and earns a lengthy suspension. Working on the Naked Men projects keeps his mind busy, but Griff’s itching to get back in the action. That’s when he finds his latest rescue mission: a pretty wallflower who’s stuck in her comfort zone.

Chloe Widmore doesn’t take risks. As a professional letter writer, she gets enough excitement out of expressing other people’s emotions. So when the hottest man she’s ever seen invades her coffee shop, Chloe surprises herself with how much she wants to be with him. Routines make her feel safe. Griff makes her deliciously unsafe, in so many ways. But falling for him is one risk she might just have to take . . . whether she’s ready or not.

Catch all of USA Today bestselling author Christi Barth’s charming Naked Men novels:
RISKING IT ALL | WANTING IT ALL | GIVING IT ALL | TRYING IT ALL

Praise for Risking It All

“The perfect escapist read—sweet and sexy, with an ending that will remind you of all the reasons you love romance.”—USA Today bestselling author Lauren Layne

“Smart, sexy, and flat-out fun, Risking It All is one story readers will have a hard time putting down. Christi Barth’s heroes will make you laugh, sigh, and swoon—what could be better?”—USA Today bestselling author Kimberly Kincaid

“Risking It All delivers sexy romance, laugh-out-loud humor, unexpected surprises, and an unbreakable bond between friends. Christi Barth has written a winner!”—Tracy March, award-winning author of Should’ve Said No

“Something special happens when Chloe and Griffin meet. Christi Barth takes you on a journey of discovery you won’t want to put down.”—Vonnie Davis, author of the Highlander’s Beloved series

“I enjoyed [Barth’s] humor and clever use of metaphor [with] this group of successful, varied, intelligent, and witty characters.”—Books and Bindings

“I can’t wait for the rest of this series.”—Obsessive Book Nerd

“An entertaining read about ordinary people who’ve fallen in love . . . It’s a great start to what should be a good series—it’s not much to risk!”—Once Upon an Alpha

“Barth does an excellent job of giving readers just enough information about Griff’s teammates to whet our appetites. I definitely want to read their stories but this one stands alone with no problem.”—Xtreme Delusions

“The banter is one of the many highlights within Risking It All.”—Book Angel Booktopia

An excerpt from Risking It All

Chloe Widmore waved at the knitting group seated next to her in the coffeehouse. They came every Monday morning, a chatty group of seniors, always with a smile for Chloe. Sometimes a little too chatty. After all, she didn’t come to Busboys and Poets every day for a caffeine buzz. She came to work.

Methodically, she began her start-of-the-day routine. Sure, the soaring, two-level industrial space smelled like cocoa-mocha goodness and buzzed with laughter like a good party. But to her it was a workplace every bit as much as the closet-like offices a few miles down the road in the Capitol, White House, and Old Executive Office Building. Just . . . without the Secret Service snipers on the rooftop.

So while Chloe’s laptop booted, she set out her backup Netbook, iPad, legal pad, box of assorted stationery, as well as two pencils; pens in purple, pink, blue, and green; and an old-fashioned fountain pen. These were only her mobile essentials. She carefully culled them every morning, depending on that day’s to-do list, from a much more comprehensive and colorful stash in her home office. It took up the entire four-top table. But the staff didn’t mind how much space she used. She tipped well and always ordered breakfast and lunch. Who was she kidding? An afternoon cookie got ordered more often than not, too.

A wave of applause began by the front door and traveled the length of the building to her. Applause? People actually standing up to clap at nine a.m.? Chloe liked distractions sprinkled throughout the day. Just not before she’d ordered her first cinnamon latte.

No matter how she craned her neck, she couldn’t tell what had sparked all the hoopla. There’d been nothing online about a movie filming in the area. And D.C. residents were far too blasé about even the biggest politicians to put their hands together for someone with a flag pin on their lapel. This didn’t make sense. The big table next to her probably had a great view. “Rosalia, what’s going on up there?”

The older woman patted her stiff, white curls as if prepping to get her flirt on. Kind of a scary thought. Even scarier when Rosalia pinched her cheeks sharply as she replied, “It’s that pilot.”

Two major airports for D.C., and another just twenty-five miles up the road in Baltimore, meant that pilots were as ubiquitous as lobbyists and spies. “Nobody would bother to clap like that for a pilot.”

“It’s the one who was on the news.” Rosalia thumped a hand onto her mountainous bosom. “He risked his life and his crew to heroically battle a storm and rescue a family.”

Potentially interesting. She’d have to Google the full story later, though, since Rosalia was prone to exaggeration. The woman once paid for a table’s drinks—total strangers—because she overheard the mom mention that her son had caught his first lightning bug. Rosalia called it a milestone.

But what really poked at the grammar nerd part of Chloe’s brain? Rosalia’s use of language. “‘He heroically battled a storm’?” She used her fingers to make air quotes. Because yes, the idea was that ridiculous.

“Technically, you can’t battle a storm. It’s not like he pulled out an assault rifle and ordered the clouds to quit it or he’d shoot.”

Good thing Chloe hadn’t ordered her latte yet. The glare Rosalie sent her way would’ve frozen it into a mochalicious popsicle. “Girls, stand up,” the leader of the knitters ordered. “This young man saved one of us.”

“A knitter? A cat lover?” Chloe guessed with a grin. Crap. She realized about two seconds too late, thanks to the multiple white-topped heads that snapped toward her with the precision of the Rockettes kick line, that she’d guessed out loud. Geez, she should go grab a coffee to kick-start her brain before she offended her seatmates any more.

“A grandmother,” hissed the short woman closest to her. “That pilot saved a child, a mother, and a grandmother. Without a moment’s thought to his own safety.”

Poor word choice, yet again. There was no way she could know whether or not the pilot thought about his safety while he was—apparently—bitch slapping the storm into submission. Still, she’d try to sneak a peek when she got in line for coffee. Because who could resist a hero?

Chloe rummaged in her hot-pink-and-brown dotted messenger bag for her wallet. Unfortunately, the first thing her fingers hit was a stiff, thick envelope. The reunion invitation she’d been ignoring. Just like she did every year. Because who in their right mind wanted to celebrate being shot and ten years of subsequent therapy?

The smooth, baritone voice jerked her head up. Across the table stood a handsome blond man. A ruggedly handsome blond man with about two days of sexy scruff darkening his jaw. The blue shade of his eyes matched the topaz on Chloe’s right hand. His black leather jacket hung open, framing a navy tee stretched tight across a set of pecs that made her blink twice. Because below the amazing pecs the shirt tucked into jeans that bulged directly at the level of her eyes. Not that Chloe was looking. Well, not that she’d keep looking.

USA Today bestselling author Christi Barth earned a master’s degree in vocal performance and embarked upon a career on the stage. A love of romance then drew her to wedding planning. Ultimately she succumbed to her lifelong love of books and now writes contemporary romance. Barth lives in Maryland with her husband. 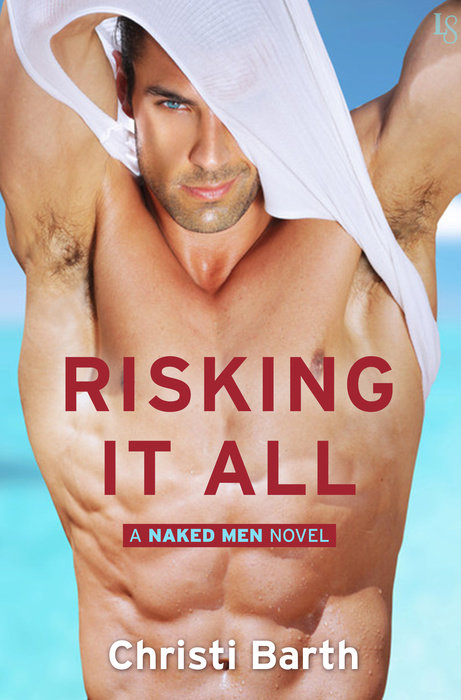