A captivating thriller of clashing cultures, the code of honor, the power of mercy, and the tangled lies between friends and family, Honor Role follows the quest of a fearless detective determined to do what she believes is right—no matter the cost.

It should have been an open-and-shut case: suicide by cyanide. But when Detective Inspector Tessa Grantley pries open the hidden parts of Freddy Hayworth’s life, she uncovers his complicated battle with mental illness and the parade of spurned women left in Freddy’s wake. Quickly, a full-blown homicide investigation ensues, where nothing is as it seems.

Outside of her demanding police work, DI Grantley seems to have outrun the secrets of her past. She is raising her son in a loving home, in a quiet London neighborhood, embraced by a tight-knit, supportive community. And while she might occasionally have different ideas about child-rearing than her Pakistani-born nanny, Jabirah Rahman, Tessa and Jabirah develop a bond not easily broken . . . until Jabirah disappears. Then, Tessa must use her intuition and investigative skills on two fronts. What she finds puts her on a collision course with ideas of justice and righteousness that dangerously conflict with her own.

In this thriller from the author of Still Death, the boundaries between Detective Inspector Tessa Grantley’s career and her family fatally blur, causing her to question everything she believes in.

An excerpt from Honor Role

Since leaving Sussex for London NW8—a thankfully quiet part of St. John’s Wood—my son, Jonathan, and I had kept our lives in order, barely, through the divine intercession of Mademoiselle Mazarine Binet, age twenty, who came to us from deepest Brittany. Mazarine lived in and cooked on weeknights. I arrived home to hearty meals, a good and generous glass of red, and the sound of Mazarine and my son nattering in French. Five-year-old Jonathan was a budding force of nature, tearing through childhood mostly with a smile. Mazarine kept him fed, happy, and safe. She was, as a friend said, our own au pair extraordinaire. For me, a single mother with a full-time-and-then-some job on the Metropolitan Police, Mazarine proved her worth time and again. I should have known it couldn’t last. Karma, remember, loves to mess with us.

One spring morning, in her by-then-proficient English, Mazarine informed me she’d decided to go back to school. I applauded her initiative, until she added she’d been accepted at the University of Nantes. God forbid she avail herself of the solid higher education on offer in England, which I would have gladly subsidized! Mais non, she was French; she wanted France. Kindly, Mazarine gave a summer’s notice, which I thought would allow time to find a suitable replacement.

Details of the rejected Mazarine candidates could fill a book, one I’ll never write. The heroin addict got my vote for worst of the lot, but he had stiff competition. In the end, the one I took may have been the least likely.

When nineteen-year-old Jabirah Rahman rang our doorbell, my first thought was to turn her away, to tell her politely it wouldn’t do. Not that she arrived dirty, high, or otherwise impaired; she was perfectly groomed, clothed in a striking salwar kameez. A scarf loosely covered her hair.

The problem that afternoon wasn’t Jabirah. It was me. It was my reaction to her headscarf—all the prejudice and preconceptions my fulsome mind associated with the placement of a piece of fabric. At the door I offered no smile, only judgment. I’m not a big fan of religion. That’s putting it tactfully. My deepest disapproval is reserved for those denominations that seem little more than the half-baked notions of some man—the “leader,” the “prophet,” whatever name he’s taken or been given—to keep women obedient, submissive, second-class. Some claim God grants them the right to have multiple wives, but if one of those wives tries the same, they’ll stone her to death. Such nonsense! The extent of my understanding was that Muslim women must cover their bodies lest they incite the lust of men, a notion I find both silly and insulting. So when I opened my door on that warm, sunny day to a woman with her head covered for reasons other than rain, I wasn’t sunny or warm.

“Yes?” I asked, Greenland-cold. In winter.

“I’ve come about the nanny position?” she said, her voice hesitant, the statement more a question. “My name is Jabirah Rahman.”

I paused too long before answering, knowing I was being rude. I knew better. After all, this person on my front step had done nothing to cause offense. She’d simply dressed with care for a job interview, full stop.

“I’m Tessa Grantley,” I said. “Please come in.” I never told Jabirah how close I came to saying the position had been filled, or whatever other fib entered my mind.

As soon as I closed the door, Jabirah removed the headscarf, which made her even more beautiful. I calmed. She followed me to the kitchen. I offered her tea, which she accepted. I’d expected a brief quarter hour of worthless small talk, after which I’d walk her to the door and out of my life. How wrong I was.

Jabirah came with strong references as well as a recently received certificate in child care. Her voice held the tinge of an accent. She had, she explained, been born in northern Pakistan. A decade ago her family had immigrated to Britain. My initial read was that she was a kind, intelligent young woman, but animosity blinded me. I’m not proud of myself for that.

After a few minutes of awkward chatting, Jabirah said, “Perhaps I should go.”

“Perhaps the position has been filled?”

“You wouldn’t be sitting here if it had,” I replied.

“I see,” she said and added, with irony, “Ms. Grantley, I’d hoped to care for your son and your home. I have no intention of turning Jonathan into an Islamic terrorist, but I would like to keep him happy, healthy, and safe. That, I’d be good at.”

Jabirah stood to take her leave. It took me a second to recover from the punch. Something between a gasp and a laugh escaped from me. Shocked, I rose. I took her hand in both of mine.

“Okay, I’m going to press the rewind button,” I said, “if you’ll let me. Please sit down and start from the beginning—after I apologize, which I’m trying to do even though I sound like a complete fool. I am sorry.”

Jabirah smiled and sat. Her body, until then tense, relaxed. We talked for nearly two hours. I was honest, putting my bigotry on display. Jabirah swatted it down with finesse. She explained, for example, how wearing a headscarf could be liberating, expressing pride in one’s culture while keeping unwanted attention at bay, an idea that astonished me until I heard her out. When she left, she had a job. And I’d had a life lesson. Jabirah changed my life.

For almost two years, Jabirah Rahman was the glue that made our house a home. She kept all of us nourished. She made us happy. I believe we made her happy too.

My first visit with Mr. Frederick Hayworth brought to mind a line from a song my father used to sing when I was little: “Say I look nice when I’m not.” Freddy, as everyone called him, looked nice. It didn’t take long to find out he wasn’t. Of course, the first time I saw him I knew nothing about the man, except that he was dead.

Mr. Hayworth, only thirty-one, met his untimely demise in a smart riverside flat—in its master bedroom en suite lav to be exact—pants crunched to his ankles. Hayworth owned the flat, which was smack on the South Bank and couldn’t have come cheap. The first photos of his body to hit my inbox brought back something toxic my not-so-sainted mum used to say—one of those casually cruel shells she lobbed during what she referred to as the “ordeal” of raising me: “No matter how careful, someday you’re going to step in shit.”

If memory serves, that shell burst after I’d won a spelling bee. Ever the glass half-empty with Mum.

Once I’d pulled his financials, it appeared that Freddy, as he was called, had also left a significant stash of money. Add to this a draft will, unsigned. Polish it off with a trail of broken hearts. Oh, and a few thousand “fans,” which we’ll get to in good time.

Freddy hadn’t been to work in two days. He hadn’t phoned in sick, which was “not like him,” colleagues insisted. The voicemail on his landline was full, his mobile battery dead. On request, the building porter had taken a look, poor fellow. Seek and ye shall find. The coroner estimated Hayworth had been dead those two days. Initial indications suggested a heart attack, rare but not unheard of in someone his age. Surprisingly, however, the autopsy found a lethal amount of cyanide, which he’d likely ingested while “crouched on the crapper,” as my partner DI Peter Lazarus put it. Eloquence is such a gift.

Hayworth, however, wasn’t actually found seated; the kick of the toxin most likely ejected him. He convulsed on the tiled floor, if only briefly, before expiring, eyes shocked open. In death, Hayworth lay hunched in a fetal curl giving a sad circularity to his too-brief existence. Not a noble way to go, but the truth was, Mr. Hayworth pleased the eye even in disheveled death. A striking face, chiseled olive skin with eyes a rare purplish hue. Good teeth, and his hair—think of the only time you ever hear the word luxuriant—a longish, wavy brown. I scrolled through the snaps taken when the first responders went over the premises. At the time, it wasn’t pegged a crime scene for it didn’t look as if a crime had been committed, other than one self-inflicted. When the autopsy found poison, the death was assumed to be suicide. Quick as a blink, it went off our books. Mr. Hayworth would answer to his God, if any, not to us. Things might well have stopped there, had Peter not made a passing remark.

Tim Hoy is the author of Still Death. As a senior vice president of Wasserman Media Group, based in the company’s Los Angeles office, he represents professional athletes, including a number of prominent NBA players. A graduate of Oberlin College, UCLA School of Theater, Film, and Television, and the University of Michigan Law School, Hoy is active in Democratic Party politics and has served on the Board of Trustees of the Lawyers’ Committee for Civil Rights Under Law. He is currently secretary of VoteRiders, a nonprofit that assists citizens with obtaining voter identification. 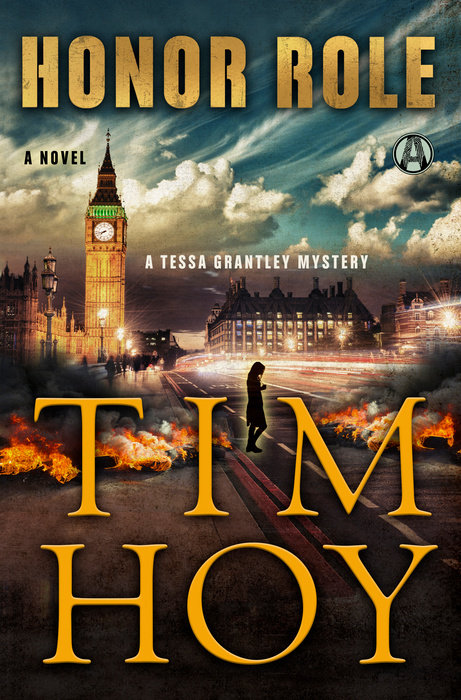