Wilderness survival is the name of the game as the line blurs between reality TV and reality itself in this fast-paced novel of suspense in the vein of Yellowjackets.

“Taut, tense, and at times almost unbearably real.”—Ruth Ware, author of One by One

She wanted an adventure. She never imagined it would go this far.

It begins with a reality TV show. Twelve contestants are sent into the woods to face challenges that will test the limits of their endurance. While they are out there, something terrible happens—but how widespread is the destruction, and has it occurred naturally or is it man-made? Cut off from society, the contestants know nothing of it. When one of them—a young woman the show’s producers call Zoo—stumbles across the devastation, she can imagine only that it is part of the game.

Alone and disoriented, Zoo is heavy with doubt regarding the life—and husband—she left behind, but she refuses to quit. Staggering countless miles across unfamiliar territory, Zoo must summon all her survival skills—and learn new ones as she goes.

But as her emotional and physical reserves dwindle, she grasps that the real world might have been altered in terrifying ways—and her ability to parse the charade will be either her triumph or her undoing.

Sophisticated and provocative, The Last One is a novel that forces us to confront the role that media plays in our perception of what is real: how readily we cast our judgments, how easily we are manipulated.

Praise for The Last One

“[Alexandra] Oliva brilliantly scrutinizes the recorded (and heavily revised) narratives we believe, and the last one hundred pages will have the reader constantly guessing just what Zoo is capable of doing to find her way back home.”—Washington Post

“A high-concept, high-octane affair . . . The conceit is undoubtedly clever and . . . well executed, but what makes The Last One such a page-turner is Zoo herself: practical, tough-minded and appealing.”—The Guardian

“Oliva takes this (possibly) post-apocalyptic setting, grafts on a knowledgeable skewering of the inner workings of reality television and gives us a gripping story of survival. . . . This is the genius of Oliva’s storytelling. . . . [She] makes a stunning debut with this page turner, and becomes a writer to watch.”—Seattle Times

“Oliva delivers a pulse-pounding psychological tale of survival. . . .  [She] masterfully manipulates her characters and the setting, creating a mash-up of popular TV genres: Survivor meets The Walking Dead.”—Bookpage

An excerpt from The Last One

The first one on the production team to die will be the editor. He doesn’t yet feel ill, and he’s no longer out in the field. He went out only once, before filming started, to see the woods and to shake the hands of the men whose footage he’d be shaping; asymptomatic transmission. He’s been back for more than a week now and is sitting alone in the editing studio, feeling perfectly well. His T-­shirt reads: coffee in, genius out. He taps a key and images flicker across the thirty-­two-­inch screen dominating his cluttered workstation.

The opening credits. A flash of leaves, oak and maple, followed immediately by an image of a woman who described her complexion as “mocha” on her application, and aptly so. She has dark eyes and large breasts barely contained in an orange sport top. Her hair is a mass of tight black spirals, each placed with perfection.

Next, panoramic mountains, one of the nation’s northeastern glories, green and vibrant at the peak of summer. Then, a rabbit poised to bolt and, limping through a field, a young white man with buzzed-­off hair that glints like mica in the sun. A close-­up of this same man, looking stern and young with sharp blue eyes. Next, a petite woman of Korean descent wearing a blue plaid shirt and kneeling on one leg. She’s holding a knife and looking at the ground. Behind her, a tall bald man with panther-­dark skin and a week’s worth of stubble. The camera zooms in. The woman is skinning a rabbit. This is followed by another still, the man with the dark skin, but this time without the stubble. His brown-­black eyes meet the camera calmly and with confidence, a look that says I mean to win.

A river. A gray cliff face dotted with lichen—­and another white man, this one with wild red hair. He clings to the cliff, the focus of the shot manipulated so that the rope holding him fades into the rock, like a salmon-­colored slick.

The next still is of a light-­skinned, light-­haired woman, her green eyes shining through brown-­rimmed square glasses. The editor pauses on this image. There’s something about this woman’s smile and the way she’s looking off to the side of the camera that he likes. She seems more genuine than the others. Maybe she’s just better at pretending, but still, he likes it, he likes her, because he can pretend too. The production team is ten days into filming, and this woman is the one he’s pegged as Fan Favorite. The animal-­loving blonde, the eager student. The quick study with the easy laugh. So many angles from which to choose—­if only it were his choice alone.

The studio door opens and a tall white man strides in. The editor stiffens in his chair as the off-­site producer comes to lean over his shoulder.

“Where do you have Zoo now?” asks the producer.

“After Tracker,” says the editor. “Before Rancher.”

The producer nods thoughtfully and takes a step away. He’s wearing a crisp blue shirt, a dotted yellow tie, and jeans. The editor is as light-­skinned as the producer but would darken in the sun. His ancestry is complicated. Growing up, he never knew which ethnicity box to check; in the last census he selected white.

“What about Air Force? Did you add the flag?” asks the producer.

The editor swivels in his chair. Backlit by the computer monitor, his dark hair shimmers like a jagged halo. “You were serious about that?” he asks.

“Absolutely,” says the producer. “And who do you have last?”

But that’s what I’m working on is what the editor had been about to say. He’s been putting off rearranging the opening credits since yesterday, and he still has to finish the week’s finale. He has a long day ahead. A long night too. Annoyed, he turns back to his screen. “I was thinking either Banker or Black Doctor,” he says.

“Banker,” says the producer. “Trust me.” He pauses, then asks, “Have you seen yesterday’s clips?”

Three episodes a week, no lead time to speak of. They might as well be broadcasting live. It’s unsustainable, thinks the editor. “Just the first half hour.”

The producer laughs. In the glow of the monitor his straight teeth reflect yellow. “We struck gold,” he says. “Waitress, Zoo, and, uh . .  .” He snaps his fingers, trying to remember. “Rancher. They don’t finish in time and Waitress flips her shit when they see the”—­air quotes—­“  ‘body.’ She’s crying and hyperventilating—­and Zoo snaps.”

The editor shifts nervously in his seat. “Did she quit?” he asks. Disappointment warms his face. He was looking forward to editing her victory, or, more likely, her graceful defeat in the endgame. Because he doesn’t know how she could possibly overcome Tracker; Air Force has his tweaked ankle working against him, but Tracker is so steady, so knowledgeable, so strong, that he seems destined to win. It is the editor’s job to make Tracker’s victory seem a little less inevitable, and he was planning to use Zoo as his primary tool in this. He enjoys editing the two of them together, creating art from contrast.

“No, she didn’t quit,” says the producer. He claps the shoulder of the editor. “But she was mean.”

The editor looks at Zoo’s soft image, the kindness in those green eyes. He doesn’t like this turn of events. This doesn’t fit at all.

“She yells at Waitress,” the producer continues, “tells her she’s the reason they lost. All this shit. It’s fantastic. I mean, she apologizes like a minute later, but whatever. You’ll see.”

Even the best among us can break, thinks the editor. That’s the whole idea behind the show, after all—­to break the contestants. Though the twelve who entered the ring were told that it’s about survival. That it’s a race. All true, but. Even the title they were told was a deception. Subject to change, as the fine print read. The title in its textbox does not read The Woods, but In the Dark.

“Anyway, we need the updated credits by noon,” says the producer.

“Cool. Just making sure.” The producer purses his fingers into a pistol and pops a shot at the editor, then turns to leave. He pauses, nodding toward the monitor. The screen has dimmed into energy-­saving mode, but Zoo’s face is still visible, though faint. “Look at her, smiling,” he says. “Poor thing had no idea what she was in for.” He laughs, the soft sound somewhere between pity and glee, then exits to the hall.

The editor turns to his computer. He shakes his mouse, brightening Zoo’s smiling face, then gets back to work. By the time he finishes the opening credits, lethargy will be settling into his bones. The first cough will come as he completes the week’s finale early tomorrow morning. By the following evening he will become an early data point, a standout before the explosion. Specialists will strive to understand, but they won’t have time. Whatever this is, it lingers before it strikes. Just along for the ride, then suddenly behind the wheel and gunning for a cliff. Many of the specialists are already infected.

The producer too will die, five days from today. He will be alone in his 4,100-­square-­foot home, weak and abandoned, when it happens. In his final moments of life he will unconsciously lap at the blood leaking from his nose, because his tongue will be just that dry. By then, all three episodes of the premiere week will have aired, the last a delightfully mindless break from breaking news. But they’re still filming, mired in the region hit first and hardest. The production team tries to get everyone out, but they’re on Solo Challenges and widespread. There were contingency plans in place, but not for this. It’s a spiral like that child’s toy: a pen on paper, guided by plastic. A pattern, then something slips and—­madness. Incompetency and panic collide. Good intentions give way to self-­preservation. No one knows for sure what happened, small scale or large. No one knows precisely what went wrong. But before he dies, the producer will know this much: Something went wrong.

Born and raised in upstate New York, Alexandra Oliva is the author of The Last One and Forget Me Not. She has a BA in history from Yale University and an MFA in creative writing from The New School. She lives in the Pacific Northwest with her husband, dog, and young son. 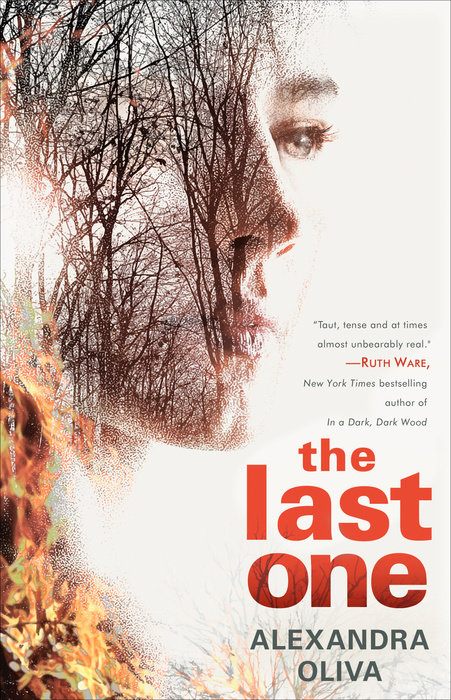