She was born for all the wrong reasons. But her search for the truth reveals answers she wishes she could bury in Forget Me Not, a suspenseful and deeply moving near-future thriller from the author of The Last One.

“In Oliva’s timely, compelling novel Forget Me Not, nothing is as it seems, which keeps the pages flying.”—Laurie Frankel, New York Times bestselling author of This Is How It Always Is

What if your past wasn’t what you thought?

As a child, Linda Russell was left to raise herself in a twenty-acre walled-off property in rural Washington. The woods were her home, and for twelve years she lived oblivious to a stark and terrible truth: Her mother had birthed her only to replace another daughter who died in a tragic accident years before.

Then one day Linda witnesses something she wasn’t meant to see. Terrified and alone, she climbs the wall and abandons her home, but her escape becomes a different kind of trap when she is thrust into the modern world—a world for which she is not only entirely unprepared, but which is unprepared to accept her.

And you couldn’t see a future for yourself?

Years later, Linda is living in bustling Seattle, but she has never felt more alone. With social media more ubiquitous than ever before, she is hounded by the society she is now forced to inhabit. When Linda meets a fascinating new neighbor who might just be a potential friend, and who shows her the possibility of a new escape through virtual reality, she begins to allow herself to hope for more by being sucked into a world that feels safe, but isn’t real.

What would it take to reclaim your life?

Then an unexplained fire at her infamous childhood home jolts Linda back to reality. She must return to the property for the first time since she was a girl, unleashing a chain of events that will not only endanger her life but challenge her understanding of family, memory, and the world itself.

An excerpt from Forget Me Not

A woman whose name shouldn’t be Linda stands inside the locked front door of her apartment, listening. Footsteps: a neighbor, walking. Linda knows her neighbors only from names on lobby mailboxes and glances through the peephole, doesn’t care to meet them, can’t chance being known. She gives the footsteps enough time to reach the elevator. To press the button, step in, and begin their descent. Then she unlocks the door, exhales the breath she was hiding from the passerby, and steps out onto the hallway’s checkered carpet.

The carpet doesn’t look any different from yesterday, and Linda wonders if it’d feel different beneath her toes if she was barefoot. She was trapped yesterday afternoon, waiting for a vacuum to be turned off and taken to another floor. By the time it was gone, her excursion window had passed: School was out, the evening rush about to begin. And though it’s in some ways easier to slip away into a crowd, it makes her skin crawl: the talking, the laughter, the heavy-­heeled steps. All these people who don’t care who overhears the intimate details of their lives as they blather into their earcuffs. Even when they aren’t talking, they’re tapping and typing, creating hashtags for their confessions and trying to make them trend.

Linda doesn’t understand how anyone can seek out the public eye. Yet every day her social feed bleeds the secrets of strangers, willingly shared.

She locks her door, then walks toward the stairwell. She wants to sprint, but that would send the message she’s worth looking at. Pushing through the door, she feels a little better. This high up, the stairs are nearly always deserted. Sometimes children dash short distances to visit a friend above or below, but they’re loud, echoing creatures—­easily avoided—­and those old enough to roam are now at school. The stairwell rings only with Linda’s footsteps. Still, she pauses to listen at each landing. The casual hello to a stranger, eye contact—­she can do it, but it drains her. She can never shake the fear that the person will recognize her, the fear of what they might say or do. She thinks of the woman last summer. The disgust in her eyes as she hissed, What did you do with the bones, freak? The glob of spit that hit Linda’s window as a hired driver whisked her out of that neighborhood for the last time.

Linda exits the stairwell. The lobby attendant is sitting at his desk, a blue leopard-­print earcuff screaming from his pale ear. Nick. Linda sometimes gets the two white attendants confused, but the earcuff is a dead giveaway. Nick doesn’t look at her, and he isn’t talking into his earcuff, isn’t singing or bobbing his head along to some starlet’s vocal fry. He’s probably listening to one of the self-­help podcasts that are popular. Tips in Attention Splitting is the one Linda keeps seeing mentioned on SocialHub: TAS Tips for Maximum Efficiency, or TASTMEs. Layers of acronyms; Linda likes to make up her own meanings. She hurries past the attendant, thinking: Totally Anonymous Shitheads Tell Man Everything.

She didn’t want a doorman building. She didn’t want to be in the city at all, had asked for a small house in the mountains, where it would be just her and the trees, maybe even the occasional fox. But Arthur insisted: It’s for the best. That’s what Dr. Tambor used to say and what Arthur still says. They’d been born to this world, so they should know.

Just as Linda is about to push her way through the lobby’s revolving door, a woman buckling beneath the weight of a plastic crate backs into the door from outside. Linda steps aside. The woman with the box is shorter than she is, looks to also be in her mid-­twenties, and her skin is dark enough that it’s clear she’s not Caucasian, though Linda can’t identify her ethnicity. She often can’t distinguish ethnicities. Dr. Tambor told her this made sense, given her isolated background; she compared it to Linda’s inability to distinguish among commonwealth accents—­a matter of exposure, no more. But interacting with darker-­skinned strangers always sends a special nervousness spiking through her. She worries they can sense this wrongness of hers: an ignorance and curiosity she’s learned to never admit to aloud.

And Linda is curious about the incoming woman. She’s striking. Her black hair is short and spiky, save for a violet-dyed swath that falls across one temple, and even burdened with the box she moves with a grace and confidence Linda covets. When the woman emerges into the lobby, it’s as a conqueror. Her eyes catch Linda’s and she chirps, “Afternoon.” Her irises are the color and pattern of crystallized honey. Linda shifts her gaze to the floor.

As the attendant scurries to help the newcomer, Linda pushes out into the wet, heavy breeze. Above, scattered clouds bask in winter daylight. A passing man pulls his coat tight as he hustles by a large shipping pod parked nearby.

Linda thinks of the elderly couple who moved out of the apartment down the hall from hers a few weeks ago—­they were ideal neighbors: quiet, unprying—­and hopes the eye-­contact-­seeking woman isn’t moving onto her floor. In a building this size, there must be other open apartments.

She squeezes her eyes shut for a moment, allowing the damp air to calm her, and thinks of how she used to love waking in her tarp-­lined nest, feeling the dew on her eyelashes, listening to the good-­morning drip of gentle rain, and watching the mist retreat. It was her favorite time of day as a child. Waking with a brief spark of hope that maybe something new would happen.

She misses that: the naïveté of assuming new meant better.

Linda burrows her chin into the collar of her wool coat and walks forward in a quick hunch, blending as best she can. But everything feels wrong: the weight of her coat, the pressure of her Sheath against her left forearm, even her gait. She’s wearing the thinnest-­soled sneakers Arthur’s assistant could find, but even after all these years she still misses the give of the fern-­lined forest floor—­running and playing Hide-­and-­Find. Sleeping in the trees; the white-­faced fox who followed her around one summer. That Christmas, the only one she can remember celebrating, where the snow fell swift and heavy and there was a green disc sled waiting, slick and new, and she skidded down the hill, laughing, toward welcoming arms.

She was loved once.

She knows it, she feels it. Some days the loneliness tears at her so hard, it seems the only thing that keeps her breathing is the tiny, stupid hope that since it had happened once, it might happen again. Though maybe cause and effect runs in the opposite direction: Maybe her mind kindles this hope because her body refuses to stop breathing. She isn’t sure it makes a difference.

A gas-­powered car drives by, louder than the rest; Linda feels a pulse of adrenaline, and she pushes past the catch in her step, telling herself, It’s just a car. She has a route in mind, one that will take her away from cars and buses to a nearby park. She needs somewhere quiet so she can make up for missing her excursion yesterday.

She pushed it once, to see what would happen if the tracking app on her Sheath recorded that she hadn’t met her mandated hour a day of excursion time. She opened all her windows, burrowed into her chair, and waited, rising only for bodily needs. Friday evening a warning had blipped across her Sheath. The following Monday, Arthur’s assistant called: Are you okay, dear? She even sounded sincere. Or so Linda thought; she often has trouble discerning sincerity. She mumbled an affirmative and what she knew was an unconvincing lie—­I’ve been out, but I forgot to wear my Sheath—­and ended the call. Then she hurried outside, walking forty minutes in one direction before turning back, accounting for the fact that she always moved faster when heading toward home. The pressure of strangers’ gazes felt especially intense that day, and it was only after she returned and saw her sneakers sitting by the door that she realized she’d been walking barefoot.

Linda pauses at the corner and waits for the light to change. The word rolls around her mind: home. Home used to be twenty wooded acres. A pond choked by native cattails and invasive bamboo. An old fox hutch with fallen mesh pinned to the earth by moss and clover. A big-­leaf maple where she built her nest: a single tree that, long before Linda’s memory began, started as three trees. Saplings that sprouted too close together and merged without thought, without consciousness, cell by cell, to become one.

Born and raised in upstate New York, Alexandra Oliva is the author of The Last One and Forget Me Not. She has a BA in history from Yale University and an MFA in creative writing from The New School. She lives in the Pacific Northwest with her husband, dog, and young son. 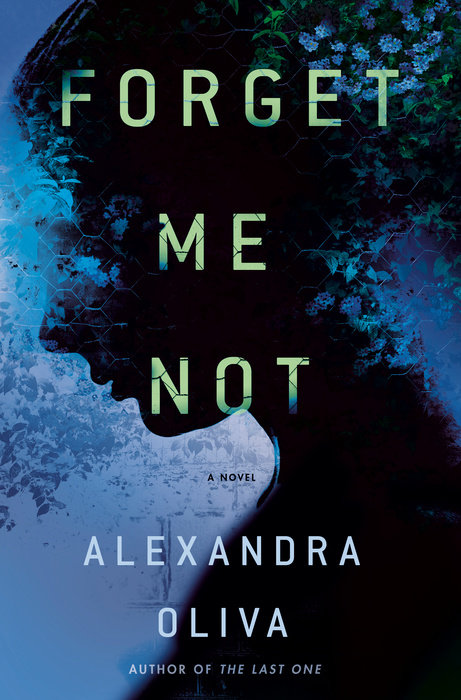