EVERY END IS A NEW BEGINNING.

As the final showdown between the New Republic and the Empire draws near, all eyes turn to a once-isolated planet: Jakku.

The Battle of Endor shattered the Empire, scattering its remaining forces across the galaxy. But the months following the Rebellion’s victory have not been easy. The fledgling New Republic has suffered a devastating attack from the Imperial remnant, forcing the new democracy to escalate its hunt for the hidden enemy.

For her role in the deadly ambush, Grand Admiral Rae Sloane is the most wanted Imperial war criminal—and one-time rebel pilot Norra Wexley, back in service at Leia’s urgent request, is leading the hunt. But more than just loyalty to the New Republic drives Norra forward: Her husband was turned into a murderous pawn in Sloane’s assassination plot, and now she wants vengeance as much as justice.

Sloane, too, is on a furious quest: pursuing the treacherous Gallius Rax to the barren planet Jakku. As the true mastermind behind the Empire’s devastating attack, Rax has led the Empire to its defining moment. The cunning strategist has gathered the powerful remnants of the Empire’s war machine, preparing to execute the late Emperor Palpatine’s final plan. As the Imperial fleet orbits Jakku, an armada of Republic fighters closes in to finish what began at Endor. Norra and her crew soar into the heart of an apocalyptic clash that will leave land and sky alike scorched. And the future of the galaxy will finally be decided.

“Star Wars: Aftermath [reveals] what happened after the events of 1983’s Return of the Jedi. It turns out, there’s more than just the Empire for the good guys to worry about.”—The Hollywood Reporter

“The Force is strong with Star Wars: Aftermath.”—Alternative Nation

“The Star Wars universe is fresh and new again, and just as rich and mysterious as it always was.”—Den of Geek!

“Compulsively readable, the kind of caramel-corn book you just keep stuffing in your face until it’s gone.”—Tordotcom

“Man oh man, this is good stuff. [Life Debt] reveals what Han and Chewie were up to after Return of the Jedi.”—io9

Leia startles at the sound of a furious pounding on the door, her knee banging into the table above which a glittering star map is projected. The map flickers, and when the voice comes through the door—“Leia! Leia!”—she struggles to stand swiftly, almost forgetting the tremendous living weight around her midsection. The child inside her kicks and tumbles as she endeavors to get upright. Calm down, little angel. You’ll be free soon enough.

“Mum,” says her protocol droid, T-2LC. “It appears as if someone is at the door.”

“Yes, I hear that, Elsie.” She winces as she moves out from around the couch. That couch was supposed to be comfortable—but all it does is swallow her up like a devouring sarlacc. “It’s just Han.”

“Is he in danger, mum? He sounds like he’s in danger. Should I open the door? I don’t want to let the danger in, but—”

“Leia, damnit, the door,” Han says from the other side. His voice is followed swiftly by more thumps and thuds. He’s kicking the door, she realizes.

“But your condition, mum—” “I’m not dying, I’m pregnant,” she snaps back, then opens the door. Han wastes no time in almost falling through it, his arm cradling a lumpy, uneven bag of something.

“Took you long enough,” he says, smirking as he juggles his footing and skirts past her, giving her a quick kiss on the cheek as he does.

“Don’t you know,” she says, shooting T-2LC a dubious look, “I have a condition.”

“Elsie, I told you, Leia doesn’t have a damn condition.” But then, more seriously and in a lower register, he says to her: “You do need to slow it down a little bit.” He gestures toward the star map. “For instance.”

“I am in command of my own body, thank you very much.”

“Tell that to the little bandit,” he says, dropping the sack of whatever down on the counter in the kitchen. The little bandit is what he’s taken to calling the child currently wrestling inside her belly.

“You mean the little angel.” She follows him into the kitchen, and T-2LC’s whining servomotors behind her indicate he’s following closely behind because someone (Han) told the droid to keep close to her in case she falls. Never mind the fact the droid stays so close to her, she’s nearly tripped on his metal feet half a dozen times already. “What did you bring?”

Han winks, thrusts his hand down into the bag, and pulls it out gripping a jogan fruit. “Look.” He gives it a lascivious squeeze.

She sighs, crestfallen. “Is that . . . whole bag full of jogan fruit?”

“I cannot possibly eat that much jogan fruit.”

“Let me rephrase: I don’t want to eat that much jogan fruit.”

“Dr. Kalonia said to incorporate jogan into my diet, not to replace everything with jogan fruit.”

He sweeps up on her, cradling her face with his rough hand. He strokes her cheek gently. “All right, all right. I’m just trying to do right by you two.”

“If I think I can help, I’ll always help. With whatever you or our son needs. You know that, right?”

It’s been hard for Han. He won’t say it out loud, but she can see it on his face. Her husband needs something to do. He’s bored. Chewbacca’s back home, looking for his family. Luke’s searching the galaxy for old Jedi teachings. Han Solo’s got nothing to smuggle, nowhere to gamble, no foolish Rebellion to fight for.

He’s like the Falcon: retired to a hangar somewhere, waiting for something, anything, to happen.

So he buys fruit.

Lots and lots of fruit.

And, of course, he worries about her. He turns her toward the table and the star map. “You’re not still on this, are you?”

“I’m always lucky with you by my side, scoundrel.”

He shakes his head. “You joke, but this is nuts.”

“It’s not nuts,” she says, suddenly irritated. “What we did on Kashyyyk was the right thing to do, and you know it. If we could formalize that process, if we could target other worlds that the Senate is too cowardly to liberate, then maybe we could—with the unofficial sanction of our friendly chancellor—find a way to do right by those worlds. Which means not only do we save whole systems, but those systems might swing our way and join the chorus of voices here in the New Republic.”

“Look,” she says, heading over to the star map. “Tatooine. Kerev Doi. Demesel. Horuz. All worlds still in thrall either to some Imperial remnant or to criminal syndicates or gangs. Rebellions work. We’ve seen it. We’ve helped make it happen.”

“You know Mon’s not going to go for that.”

In the aftermath of the attack on Chandrila, the New Republic was left reeling. Already the whispers arose: The New Republic cannot protect itself, how can it protect us? Already the accusations have been aimed at Mon Mothma’s head like turning rifles: She is weak on military presence and now she’s injured, how can she truly lead us? Leia and Han came back bringing a much-needed—if illegal and unexpected— victory for the New Republic at a time when it badly needed it. Yes, Chandrila was attacked. But they saved Kashyyyk. They ran off the Empire and liberated the Wookiees. It was a win. And it stopped the Senate from hemorrhaging loyal senators.

She starts to say, “If we could aid rebels on each of these worlds—”

“Mum,” T-2LC chimes in, literally thrusting his copper-shine protocol droid head in front of her. “You have a call.”

“I’ll take it here.” She settles back down into the couch, then swipes the star map off the projector. A new image replaces it: the face of Norra Wexley. Once a pilot for the Rebellion, and recently the leader of a team of “Imperial hunters,” tracking down the Empire’s many war criminals when they fled to various corners of the galaxy to hide. She had helped Leia in a different capacity, finding her missing husband and helping Han free Chewbacca and his planet from the Empire. Now, though? Norra is out there looking for prey most elusive: Grand Admiral Rae Sloane.

Chuck Wendig is the New York Times bestselling author of Wanderers, The Book of Accidents, and Wayward, and over two dozen other books for adults and young adults. A finalist for the Astounding Award and an alum of the Sundance Screenwriters Lab, he has also written comics, games, and for film and television. He’s known for his popular blog, terribleminds, and books about writing such as Damn Fine Story. He lives in Bucks County, Pennsylvania, with his family. 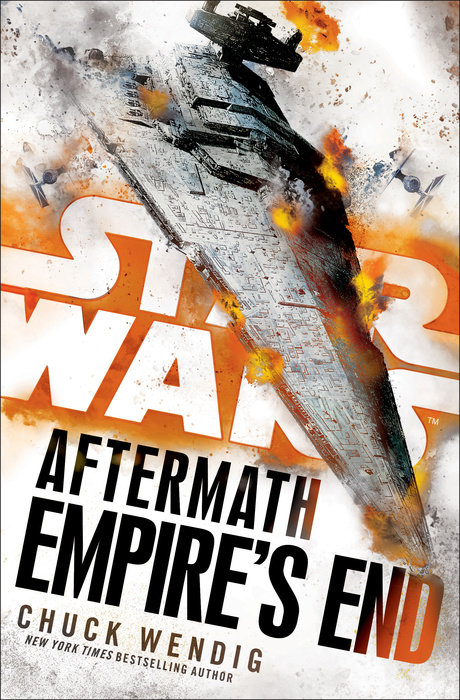