A real-life vanishing act leaves one man looking for his missing friend in this Kafkaesque new novel from the author of The Room and The Invoice.

NAMED ONE OF THE MOST ANTICIPATED BOOKS OF 2020 BY The New York Times • BookRiot • The A.V. Club • Gizmodo

The gentle, off-beat narrator of The Circus is perfectly content with his quiet life. By day he works in a bakery, and by night he obsessively organizes and reorganizes his record collection: it’s all just the way he likes it. But when his childhood friend Magnus comes calling out of the blue, the contours of our narrator’s familiar world begin to shift. On a visit to the circus together, Magnus volunteers to participate in the magician’s disappearing act, and midway through the routine he vanishes. Is this part of the act? What’s happened to Magnus? And who is it calling on the phone in the dead of night, breathing into the receiver, but never saying a word?

Smart, sharply unsettling, and with its sleight of hand exquisitely kept, The Circus is a funhouse mirror of a read—one that ingeniously reveals the way we see ourselves and the stories we tell.

An excerpt from The Circus

It all started with the usual discussion: is it possible to be friends with someone who listens to “Fix You” by Coldplay? Then it broadened out and turned into a debate about friends and friendship in general. For a while I thought there was something wrong with the phone, like when you get a crossed line and find yourself talking to someone else. Dansson had told me you could find yourself talking to a complete stranger. Obviously I should have learned never to trust Dansson. Nor Jallo, come to that. Look, I’m getting this all muddled up. I’m not actually sure what order things happened in, to be honest. But I do know what happened. What happened when Magnus Gabrielsson disappeared at the circus. And by that I don’t mean he got lost in the crowd. I mean he disappeared and didn’t come back.

An old friend of mine, Magnus, had called me and asked if I wanted to go to the circus with him. I didn’t particularly like circuses, but Magnus said this one was worth going to.

“They’ve got clowns,” he said.

I was standing in front of my record collection holding my phone between my ear and my shoulder. In one hand I had Fun Boy Three, and in the other one of Terry Hall’s solo albums, which I was trying to squeeze in between the albums by the Specials and those by the Special AKA.

I’d already spent all morning lying on Jallo’s couch, drinking coffee and talking crap about all sorts of stuff. Music, old memories, the usual gossip. On and on we went. The atmosphere was pretty strained right from the start, and by the end we’d fallen out badly. It began with a discussion of “Fix You” by Coldplay, but soon developed into a wider debate about “real friends.”

“So what is a ‘real friend,’ then?” Jallo asked, scratching his chin.

The whole thing was ridiculous. I had no desire to get bogged down in that sort of pseudo-philosophical nonsense. And the question sounded like a bit of a guilt trip. Are you a real friend? What do you mean, a real friend?

“Maybe your real friends aren’t always the ones you think they are,” Jallo went on, and started talking about a bully from back at school called Dennis, who had the worst music taste in the world.

“We become new people all the time,” Jallo said.

“What do you mean by that?”

“We change. There’s nothing weird about it.”

In the end I got so angry that I stood up and shouted at him. I slammed the door behind me and walked all the way home. Right now all I wanted was to be left alone for a while.

Magnus went on talking about the circus, about the different acts. He gave me a long spiel about who was doing what, and what order it would be happening in. I was only half-listening, and let him go on while I sorted my records and checked that they were grouped together properly. Madness next to the Selecter next to the Specials next to Elvis Costello. Lucinda Williams next to Jolie Holland next to M. Ward next to She & Him. When Magnus noticed I still sounded dubious, he added, as if he’d suddenly remembered, “My treat, obviously.”

Magnus Gabrielsson always made me feel guilty. We were old childhood friends and nowadays only met up every couple of years out of duty. We’d sit and stare at each other in awkward silence, saying it was good to see each other, that we really must do this more often, that we ought to go bowling sometime. Then we would go our separate ways, relieved that we didn’t have to go through that again for another year or so.

I suppose we still had a few things in common. Music, of course, but there were other things that made us both a bit different. Neither of us had bothered to get a mobile phone, for instance. Not out of any particular point of principle—I was actually one of the first to get a cordless phone—but when mobiles appeared for some reason I never caught up. Suddenly everybody had one. And getting one then would mean being last. So neither Magnus nor I bothered. That’s made things a bit difficult, and to be honest I have thought about getting one, but it’s become a matter of saving face now. So we called each other on our landlines. Just less and less often. It had been over a year since we last spoke, and now he wanted me to go to the circus with him.

I thought about all the things I’d rather do: look round record shops, rent a film, browse the latest IKEA catalogue, poke about on the Ginza music website, clean the bathroom, do the sudoku in yesterday’s paper. Or just carry on sorting my records. After thinking about it for a while, I decided I’d go. Not because I wanted to, but because it felt like a good opportunity to get a meeting with Magnus out of the way. Maybe that discussion about “real friends” had something to do with it as well.

The circus was called Hansen and Larsen’s Magic Company, and it was more of a theatrical “happening” than a traditional circus. We passed a big neon sign on which bright red and yellow letters lit up one at a time, from the top down, until you realized that the letters formed a top hat. I was following Magnus. A band was already playing when we arrived, but the whole thing felt shabby, haphazard, and not particularly well organized. The woman standing by the entrance was busy with her mobile phone. She didn’t even look up when we showed our tickets. We headed down a corridor made of bright orange curtains, walking on a cheap, crumpled blue carpet. A string of lights ran along one side of the carpet, curling around itself in places. You had to take care not to trip over it. Scattered around were things that had clearly been taken from someone’s living room: a dresser, a standard lamp with a fabric shade, an extension cord running across a handwoven carpet. It all helped reinforce the illusion that we were indoors, even though we were outside. I was already regretting coming because the moment we entered the main arena I started humming Frank Sinatra’s “Love and Marriage,” and whenever I get that stuck in my head I always know things are going to turn out badly. It’s like a premonition, a way for my subconscious to let my conscious mind know that something isn’t right.

The tent wasn’t very big, and felt cramped and homespun, with draped material forming tunnels leading off in different directions. The floor sloped. Everything sloped. Even though there wasn’t much room it was full of people, but somehow Magnus and I still managed to get good seats. In the middle of one of the benches, fairly close to the front.

The lights dimmed to leave a spotlight shining on a little red velvet curtain. Magnus stretched out beside me, tapping his foot and very excited. Almost as if he was nervous. Like a child. I wondered if maybe he’d never been to a circus before. I’d been a couple of times when I was little. Even if they were nothing like this one.

The ringmaster welcomed us all and I wondered if he was Hansen or Larsen. He waved a staff in front of our faces. I could smell the acrid stench of his old tailcoat when he raised his arm.

The ringmaster introduced a trapeze artist, supposedly the best in Europe, and she entered the ring to loud applause. The trapeze artist turned out to be a very sturdy woman with a mane of hair and big muscles. She spun some plates with cakes and pastries on them while she was balancing on the wire. But the wire was only suspended a few centimeters above the ground, so they might as well not have bothered. It could have even touched the ground as she walked along it. Either way, the audience was very enthusiastic. Magnus clapped several times, even in the middle of the act. After the trapeze artist two clowns in blue hats came in and started to build a tower out of old musical instruments while a third clown in a red hat sabotaged their efforts. They had planned the routine very cleverly so that the first two clowns never saw the third. None of them saw the others, because as soon as one went out the other two came in, and so on. The clown in the red hat hid behind the instruments and kept rearranging things when the others had left the ring. When he had wound the other two up so much that they started shouting at each other, he switched strategy and began to help them instead, and without any of them seeming to realize how it happened, in the end they succeeded in building some sort of tower. The clowns in the blue hats shook hands and congratulated each other while the clown in the red hat toppled the whole thing over and the instruments fell to the ground with a great crash. The first two clowns chased each other out of the ring with rubber mallets.

The whole act made me feel uncomfortable. But Magnus and the children in front of me laughed so hard they could hardly breathe. Magnus looked at me, but I just shook my head.

After the clowns the ringmaster came back in to introduce a magician.

“Ladies and gentlemen,” he said. “I present to you Mr. Magic Bobbi!”

Bobbi was wearing a long cape and dazzling white gloves. He started off with some tricks involving rabbits and doves and playing cards, all the things magicians usually do. Then, after a while, he pulled off his gloves and said he was going to make a member of the audience disappear. He asked for a volunteer. A deafening silence followed, and I wondered if anyone was going to offer themselves. Then I realized that Magnus was raising his hand right next to my head. Everyone turned to look at us.

Jonas Karlsson is the author of The Circus, The Room, and The Invoice. One of Sweden's most prominent actors, Karlsson has performed on Sweden's premier stage and in several acclaimed feature films and television series. In 2005, Karlsson made his debut as a playwright, earning rave reviews from audiences and critics alike. Spurred by the joy of writing for the stage, Karlsson began writing fiction. 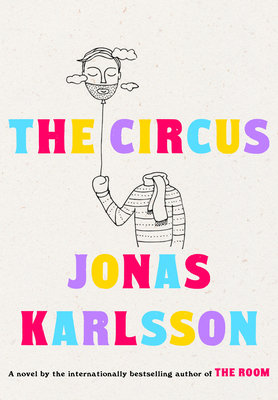