Encounters with the Islamic State

What does ISIS really want? This is the definitive account of the strategy, psychology, and fundamentalism driving the Islamic State.

NAMED ONE OF THE BEST BOOKS OF THE YEAR BY FOREIGN AFFAIRS • “Worthy of Joseph Conrad . . . gripping, sobering and revelatory.”—Tom Holland, New Statesman

The Islamic State inspired a wave of true believers to travel to Syria from Europe, America, and the Middle East, in numbers not seen since the Crusades. What compelled tens of thousands of men and women to leave comfortable, privileged lives to join a death cult in the desert? Steven Pinker called Graeme Wood’s analysis of this phenomenon in The Atlantic “fascinating, terrifying, occasionally blackly humorous.” In The Way of the Strangers, Wood uses character study, analysis, and original reporting to take us further into the Islamic State’s apocalyptic vision.

Though the Islamic State has lost territory, it threatens to rise again, and its followers are plotting on every continent. From the streets of Cairo to the mosques of London, Wood meets with supporters, recruiters, and scholars and asks them why they believe that killing and dying for this cause is the only path to Paradise. With a new afterword, The Way of the Strangers uncovers the theology and emotional appeal of this resilient group and explores its idiosyncratic, coherent approach to Islam. Just as Lawrence Wright’s The Looming Tower explained the rise of Al Qaida, this book will shape our understanding of a new and deadlier generation of terrorists.

Praise for The Way of the Strangers

“The Way of the Strangers represents journalism at its best: vivid writing, indefatigable legwork, and fearless analysis.”—Robert D. Kaplan, author of The Return of Marco Polo’s World

“Wood is a brilliant analyst and storyteller, and his firsthand reporting and language abilities make him the most reliable commentator on the Islamic State that I have read. His wit matches his intelligence (’Well-behaved Salafis seldom make history’)—you don't get through any two pages in his book without a good laugh.”—Peter Theroux, author of Sandstorms: Days and Nights in Arabia

“Excruciatingly well observed and devastatingly honest . . . This is the first and only book about the Islamic State to expose, explain, and ultimately undermine its ideology with the relentless irony that comes from blending deep knowledge with hands-on experience. Wood makes it impossible not to laugh, despite the horrors.”—Elisabeth Kendall, senior research fellow in Arabic and Islamic studies, University of Oxford

An excerpt from The Way of the Strangers

Man at last will begin to harmonize himself in earnest. He will make it his business to achieve beauty by giving the movement of his own limbs the utmost precision, purposefulness and economy in his work, his walk and his play. He will try to master first the semiconscious and then the subconscious processes in his own organism, such as breathing, the circulation of the blood, digestion, [and] reproduction. . . . The human species, the coagulated Homo sapiens, will once more enter into a state of radical transformation.

The Islamic State’s war for the end of the world began for me the same way it has for many others: with a lesson in etiquette.

In October 2011, two and a half years before the declaration of the caliphate of Abu Bakr al Baghdadi, I came to Cairo, the capital of Egypt and the largest city in the Arab world. That Cairo is also the most ill-mannered city in the Arab world is not in doubt; whether one loves it or reviles it for its discourtesy is a matter of taste. Short-term visitors are cheated by cab drivers or browbeaten by tourist guides, and they board their flights home denouncing Cairo as a city of rogues. But Cairo’s disobedience often breeds cleverness—artistic, social, literary—of a productive and admirable sort. Nine months before, it had made Cairo a crucible of political renewal, when the Tahrir Square revolution ousted Hosni Mubarak and put in his place a provisional government led by the Muslim Brotherhood, and therefore far friendlier to religious politics. Now the country faced an uncertain fate, and all factions were plotting, with varying competence, to press their advantages.

At twilight, after the sun is down and before the shop lights and street lamps switch on, Cairo becomes a city lit by headlights, and the dust and grit from the day’s traffic hang visibly in the air. One such evening, at a political rally near Tahrir Square, I met Hesham Elashry, then in his early fifties, and accepted his invitation to a meal and a stroll. Hesham was a politically engaged Muslim. At the time, there was not yet an Islamic State to support, but he associated with other people and groups with clear jihadist leanings. He did not conceal his motive in talking to me: he wanted me to become a Muslim.

We were downtown, in an area near several government ministries and offices. Traffic interrupted our dialogue now and then. But occasionally we’d pass close to a sensitive building, and security checkpoints would stop most cars from entering, so that we’d have a few minutes of pedestrian peace. Hesham filled the silences. His instruction began with bearing, poise, and dress. I had been hopping around to avoid tripping on chasms in the broken pavement. Hesham approved of my pace and noted that the Prophet Muhammad walked quickly as well. “The Prophet walked fast,” he said, “as if he was jogging.” He corrected me, politely, with literally every step. When the cars came back, they passed close, their slipstream tickling the hairs on my forearm and dusting us with carbon. “Walk this way,” he said, taking my left arm with his right arm and putting himself, chivalrously, between me and the traffic. “The Prophet said to touch other people with your right hand, to keep what is good on your right.” He explained the virtue of elegant footsteps, particularly for women; of hair kept short on certain parts of the face and body and allowed to grow jungly elsewhere; of gentle language, for both men and women, and abstention from guttersnipe dialects of Arabic in favor of the baroque and complex language of classical Arabic and the Koran.

I felt myself straightening my back and tongue under his tutelage. He could be kind and insulting in the same sentence. “With Islam, there is a way for everything,” he told me—a way to pick one’s teeth (with a miswak, a gingery-tasting stick), a way to dress (in loose trousers that stop mid-calf, exposing the ankles), a way to eat and drink. “Without Islam, you are like an animal,” just making decisions based on instinct, and ruled by base pleasures. (“Worse than an animal,” another jihadist later told me. “An animal has to obey Allah. It has no soul, no will. You can disobey. You can be worse.”) Hesham assured me that God would be patient. “If you become a Muslim tonight,” he said, “you will be a baby Muslim.” Just as a child learns to walk by pulling himself up, staggering and tumbling, I would be expected to falter and misstep at first. But he promised I would soon glide through the world with righteous aplomb. I would float three inches above the filth of the sidewalks and the decay of the mortal world—in it, but no longer of it.

The Sheikh Henry Higgins routine, offering an extreme makeover of my soul, had a political purpose as well as a personal one. When the Islamic State’s predecessors in Iraq began recruiting globally over the next few years, they stressed a theme of metamorphosis through Islam. And I recognized from my experience with Hesham, which did not end with that gritty stroll, that he had been recruiting me to join more than his religion. He was recruiting me to a polity that didn’t yet exist, an Islamic state that might resemble, ultimately, the Islamic State to come.

One of the illusions surrounding the Islamic State is that it arose from nowhere, that it drew itself into being on a blank slate. But it could never have achieved so much, so fast, if there had not been millions of people already hungry for what the Islamic State promised. And in Hesham’s proselytizing I detected a voracious appetite.

Both Hesham and the Islamic State adhere to a broad category of Islamic interpretation and practice known as Salafism. The term “Salafi” comes from the Arabic al salaf al salih [the pious forefathers], which refers to the first three generations of Muslims. Sunni Muslims all profess to adore these early Muslims and to take them, after the Prophet himself, as models of behavior. The reason for this veneration is a saying of the Prophet: “The best of my community are my generation, the ones who follow them, and the ones who follow them.” Salafis take the Koran, the example of the Prophet, and the actions and beliefs of these men and women as their primary sources of religious authority, and they reject the opinions of many Muslims who came later.

In reviving the ways of the Salaf, they tend to view the present world as a fallen one, and the majority of Muslims—who are not Salafi—as misguided for modifying or modernizing the faith from its perfect beginnings. Salafis reserve particular scorn for Sufis and Shia. Both Sufis and Shia, Salafis contend, are guilty of idolatry [shirk] for their innovative practices, particularly the veneration of saints and building shrines. Salafis’ first order of business is to expiate sin by ridding the world of these innovations. Some Salafis have been willing to use force to do so. Most household-name violent jihadists, including Osama bin Laden and the Islamic State’s Abu Bakr al Baghdadi, have been jihadi-Salafis. Since the Prophet and his followers lived in a period of military conquest, their historical example offers modern jihadists ample precedent for violence.

But to model oneself after the Prophet and his followers is not necessarily to embrace violence, and to fight in the name of Islam is not to be Salafi. (In Chechnya and Libya, to name two recent venues, Sufis have wreaked havoc on infidel armies.) And most Salafis are political quietists who eschew political violence and concentrate on personal piety. Salafism, in a form evangelized by Muhammad ibn ʿAbd al Wahhab (1703–1792), is the state religion of Saudi Arabia, and that country’s political establishment views Salafism as a way to keep its population acquiescent to the existing order.

Well-behaved Salafis seldom make history, however, and neither Hesham nor Abu Bakr al Baghdadi has been among the more couth of their kind. They believe it is a virtue and an obligation to resist, violently, an infidel political order. The name of that resistance is jihad. Those who think the ideology of the Islamic State emerged Athena-like, suddenly and fully formed, from the head of Abu Bakr al Baghdadi would see their illusion dispelled by observing the transformation of Hesham, and the rise of jihadi Salafism as a whole.

Graeme Wood is a national correspondent for The Atlantic. He has written for The New Republic, The New Yorker, Bloomberg Businessweek, The American Scholar, The Wall Street Journal, The New York Times, and many other publications. He was the 2014–2015 Edward R. Murrow Press Fellow at the Council on Foreign Relations, and he teaches in the political science department at Yale University.

Encounters with the Islamic State 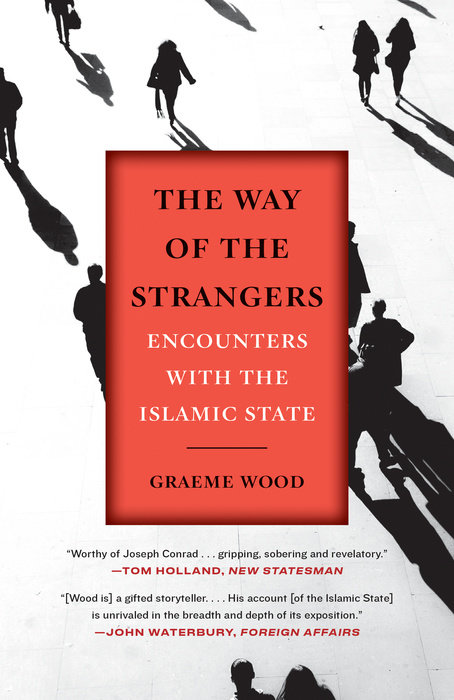