After her music career crashes and burns spectacularly, Juliet Langley is forced to turn to the only other business she knows: food service. Unfortunately, bad luck strikes yet again when her two-timing fiancé robs her blind and runs off with her best waitress. Flushing what’s left of her beloved café down the toilet with her failed engagement, Juliet packs up and moves back to her college stomping grounds in Nashville to manage an old friend’s coffeehouse. At first glance, it seems as though nothing’s changed at Java Jive. What could possibly go wrong? Only that the place is hemorrhaging money, the staff is in open revolt, and Juliet finds one unlucky employee dead in the dumpster out back before her first day is even over.

The corpse just so happens to belong to the cook who’d locked horns with Juliet over the finer points of the health code. Unimpressed with her management style, the other disgruntled employees are only too eager to spill the beans about her fiery temper to the detective on the case. Add to the mix a hunky stranger who’s asking way too many questions, and suddenly Juliet finds herself in some very hot water. If she can’t simmer down and sleuth her way to the real killer, she’s going to get burned.

Praise for Death Before Decaf

“I was hooked from the first page. I loved it!”—Dorothy Cannell, award-winning author of the Ellie Haskell mysteries

“Caroline Fardig brings a fun cast of characters to life in Death Before Decaf! Juliet had me laughing, smiling, and rooting for her from the first page to the last. I can’t wait for more!”—Gina LaManna, author of Teased to Death

“Caroline Fardig keeps you turning pages in this fast-paced mystery set in a Nashville coffee shop.”—Nancy J. Parra, author of Engaged in Murder

“With a fair share of twists, turns, and a murderer I did not suspect, Fardig delivers a caffeinated romp and a promising start to the Java Jive mystery series.”—Book Club Librarian

“A delightfully charming mystery with humor, suspense and a cast of characters to die for.”—Moonlight Rendezvous

“I can see this being a series to help bring a younger audience to the cozy mystery genre.”—Musings and Ramblings

“[Juliet’s] temper plus a good sense of humor make her a great series protagonist, someone readers would actually like to befriend.”—Mallory Heart Reviews

“This book had me hopping from murder to love interest and back to criminal activities.”—Storeybook Reviews

An excerpt from Death Before Decaf

I hate college kids. From their unwashed righteousness to their impossibly naïve view of the “real world,” they really piss me off. So, on the eve of my thirtieth birthday, what did I do? I went and moved into a craphole apartment building full of the little buggers. Oh, and I took a job at a university-area coffeehouse, so that I could serve them, too. Brilliant idea. Truly brilliant.

Now, why would I go and do a stupid thing like that, you ask? Necessity. I was broke. It was either move in with my parents (again), or accept a job from an old friend and strike out on my own, penniless. I would choose loneliness and poverty over suffocation and nagging any day. Not that my parents aren’t wonderful people, because they are. It’s just that I can’t stand living under the same roof with them.

So here I was, back in Nashville, in my old college stomping grounds. I have a degree in vocal performance from Belmont, but that doesn’t do a person with paralyzing, all-consuming stage fright much good. That was why I took the job at my friend Pete’s coffeehouse, because you can’t be a teacher or a lawyer or a rocket scientist with a vocal music degree. You can, however, be a damn good restaurant manager, which I am. Well, if you don’t count the time my dickhead fiancé stole all of the money from the café we owned together and left town with my best waitress.

Life has given me lemons. What’s a girl to do? I’m going to make some coffee.

The moment I set foot inside Java Jive, I felt like I was home. The place looked exactly the same as it had the first time I walked through the door over ten years ago, and the pervasive aroma of freshly brewed coffee still hung heavy in the air. My longtime best friend, Pete Bennett, was even behind the counter, wiping up a spill and throwing a towel over his shoulder exactly like he always did. When he looked up and smiled at me, a wave of nostalgia hit me like a ton of bricks, and I was immediately transported back to the first time we met.

At that time, I was nineteen and a freshman at Belmont University. My parents had given me exactly five hundred dollars of spending money for the entirety of my freshman year. Needless to say, it was long gone before Christmas break, and I was in desperate need of a job. I answered a “help wanted” ad posted on campus for a local coffeehouse, Java Jive, and scheduled an interview with the owner. Besides babysitting, I had never had a job before. To say that I was nervous would have been a heinous understatement.

I walked in the door, and a boy from school was standing behind the counter, wiping up a spill. I had a huge crush on him, but I hadn’t known he worked here. All I knew was that his name was Pete and that he was dreamy, with his spiky black hair and ever-present smile. He threw the towel over his shoulder and greeted me, “Hi, what can I get you?”

He frowned. “Then I’m going to have to ask you to leave. We have a strict ‘no loitering’ policy here.”

Breaking into a grin, he said, “I’m just yanking your chain. I know who you are.”

Wide-eyed, I asked, “You do?” How could he possibly have known me? He was a year ahead of me, and we didn’t have any classes together. Plus, I was still dealing with homesickness, so I wasn’t overly outgoing—not what you’d call big man on campus, or whatever the female equivalent of that is.

“Sure. You’re Juliet.” He then broke into song, his voice throaty and pitch-perfect: “‘Juliet. Oh, Juliet. The night was magic when we first met.’”

My blush deepened as I tried desperately not to grin like an idiot at the fact that Dreamy Pete was serenading me. That was no easy feat for a lonely nineteen-year-old girl, but I managed to choke out, “I’m, um, here for an . . . interview.”

His face turned serious. “Yeah, about that. My pop—he’s the owner—usually does those, but he had to run and pick up my little sister from dance class. You’re stuck with me.”

I remember thinking how awesome it would be to have Dreamy Pete all to myself for a while. But then the reality hit me that I’d have to be able to form a complete sentence around him (if I wanted the job, that is). Before my brain had a chance to catch up, I blurted, “I’d like to be stuck with you,” and immediately cringed.

He smiled again. “That’s good enough for me. You’re hired.”

My mouth dropped open. “That’s it? You don’t want to know about my job history or work ethic? Or if I’m an axe murderer or anything?”

Chuckling, he answered, “You don’t look like an axe murderer to me. And if you’re terrible at the job, Pop will fire you. Deal?”

“Great. Wanna hang out with me and have some coffee?”

I couldn’t believe my luck. What were the odds I’d meet my crush and get a job working with him and get invited to hang out with him, all in under five minutes? That night we talked for hours, staying long after the coffeehouse closed. It was the first time since I had left home that I felt like I was exactly where I was supposed to be.

Caroline Fardig is the USA Today bestselling author of more than a dozen mysteries. Fardig’s Bad Medicine was named one of the best books of the year by Suspense Magazine. She worked as a schoolteacher, church organist, insurance agent, funeral parlor associate, and stay-at-home mom before she realized that she wanted to be a writer when she grew up. Born and raised in a small town in Indiana, Fardig still lives in that same town with an understanding husband, two sweet kids, two energetic dogs, and one malevolent cat. 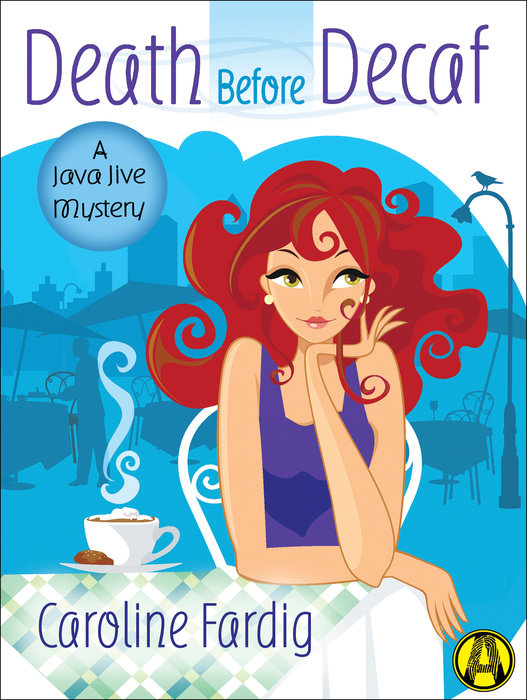