NEW YORK TIMES BESTSELLER • “A world of invention and skulduggery, populated by the likes of Edison, Westinghouse, and Tesla.”—Erik Larson

From Graham Moore, the Oscar-winning screenwriter of The Imitation Game and New York Times bestselling author of The Sherlockian, comes a thrilling novel—based on actual events—about the nature of genius, the cost of ambition, and the battle to electrify America.

New York, 1888. Gas lamps still flicker in the city streets, but the miracle of electric light is in its infancy. The person who controls the means to turn night into day will make history—and a vast fortune. A young untested lawyer named Paul Cravath, fresh out of Columbia Law School, takes a case that seems impossible to win. Paul’s client, George Westinghouse, has been sued by Thomas Edison over a billion-dollar question: Who invented the light bulb and holds the right to power the country?

The case affords Paul entry to the heady world of high society—the glittering parties in Gramercy Park mansions, and the more insidious dealings done behind closed doors. The task facing him is beyond daunting. Edison is a wily, dangerous opponent with vast resources at his disposal—private spies, newspapers in his pocket, and the backing of J. P. Morgan himself. Yet this unknown lawyer shares with his famous adversary a compulsion to win at all costs. How will he do it?

In obsessive pursuit of victory, Paul crosses paths with Nikola Tesla, an eccentric, brilliant inventor who may hold the key to defeating Edison, and with Agnes Huntington, a beautiful opera singer who proves to be a flawless performer on stage and off. As Paul takes greater and greater risks, he’ll find that everyone in his path is playing their own game, and no one is quite who they seem.

“A satisfying romp . . . Takes place against a backdrop rich with period detail . . . Works wonderfully as an entertainment . . . As it charges forward, the novel leaves no dot unconnected.”—Noah Hawley, The New York Times Book Review

An excerpt from The Last Days of Night

CHAPTER 1
The Last Days of Night

People don’t know what they want until you show it to them. —Steve Jobs

On the day that he would first meet Thomas Edison, Paul watched a man burn alive in the sky above Broadway.

The immolation occurred late on a Friday morning. The lunchtime bustle was picking up as Paul descended from his office building onto the crowded street. He cut an imposing figure against the flow of pedestrians: six feet four inches, broad shouldered, cleanshaven, clothed in the matching black coat, vest, and long tie that was to be expected of New York’s young professional men. His hair, perfectly parted on the left, had just begun to recede into a gentle widow’s peak. He looked older than his twenty-six years.

As Paul joined the throng along Broadway, he briefly noticed a young man in a Western Union uniform standing on a ladder. The workman was fiddling with electrical wires, the thick black cables that had recently begun to streak the skies of the city. They crisscrossed the thinner, older telegraph wires, and the spring winds had gusted them into a knotty bundle. The Western Union man was attempting to untangle the two sets of wires. He looked like a child flummoxed by enormous shoelaces.

Paul’s mind was on coffee. He was still new to the financial district, new to his law firm’s offices on the third floor of 346 Broadway. He hadn’t determined which of the local coffeehouses he preferred. There was the one to the north, along Walker. And the slower-serving but more fashionable one, on Baxter, with the rooster on the door. Paul was tired. The air felt good against his cheeks. He hadn’t been outside yet that day. He’d slept in his office the night before.

When he saw the first spark, he didn’t immediately realize what was happening. The workman grabbed hold of a wire and tugged. Paul heard a pop—just a quick, strange pop—as the man shuddered. Paul would later remember seeing a flash, even if at the time he wasn’t sure what it was. The workman reached out for support, grasping another wire with his free hand. This, Paul would come to understand, was the man’s mistake. He’d created a connection. He’d become a live conductor.

And then both of the workman’s arms jolted with orange sparks.

There had to be two hundred people crowding the street that morning, and every head seemed to turn at the same time. Financiers parading in their wide-brimmed top hats; stock traders’ assistants sprinting down to Wall Street clutching secret messages; social secretaries in teal skirts and sharp matching jackets; accountants out hunting for sandwiches; ladies in Doucet dresses visiting from Washington Square; local politicians eager for their duck lunches; a fleet of horses dragging thick-wheeled cabs over the uneven cobblestones. Broadway was the artery that fueled lower Manhattan. A wealth heretofore unknown on the face of the earth was burbling up from beneath these very streets. In the morning’s paper Paul had read that John Jacob Astor had just become officially richer than the Queen of England.

All eyes fixed on the man in the air. A blue flame shot from his mouth. The flame set fire to his hair. His clothes burned off instantly. He fell forward, his arms still wrapped around the wires. His feet dangled against the ladder. His body assumed the position of Jesus upon the cross. The blue flame fired through his mouth and melted the skin from his bones.

No one had screamed yet. Paul still wasn’t even sure what he was watching. He had seen violence before. He’d grown up on a Tennessee farm. Death and the dying were unspectacular sights along the Cumberland River. But he’d never seen anything like this.

Epochal seconds later, as the man’s blood poured onto the teenage newsboys below, the screaming began. A stampede of bodies fled the scene. Grown men knocked into women. The newsboys ran through the crowd, not heading anywhere in particular, simply running. Trying to pull the charred flesh from their hair.

The horses reared on their haunches, kicking their legs into the sky. Their hooves flew at the faces of their panicked owners. Paul was frozen in place until he saw a newsboy fall in front of the wheels of a two-horse carriage. The stallions shook at their reins, lurching forward and drawing the wheels toward the boy’s chest. Paul was not aware of making the decision to lunge—he simply did it. He grabbed the boy by the shoulder, pulling him out of the road.

Paul used his coat sleeve to brush the dirt and blood from the child’s face. But before Paul could check him for injuries, the boy fled into the crowd again.

Paul sat down against a nearby telegraph pole. His stomach churned. He realized he was panting and tried to steady his breath as he rested in the dirt.

It was another ten minutes before the ringing of bells announced the arrival of the firemen. Three horses pulled a water truck to a stop beside the grim scene. A half dozen firemen in black-buttoned uniforms lifted their disbelieving eyes to the sky. One reached instinctively for his steam-powered hose, but the rest simply gazed in horror. This was like no fire they’d ever witnessed. This was electricity. And the dark marvel of man-made lightning was as mysterious and incomprehensible as an Old Testament plague.

Paul sat transfixed for the forty-five minutes it took the fearful firemen to cut down the blackened body. He took in every detail of what he saw, not to remember, but to forget.

Paul was an attorney. And this was what his as yet brief career in the law had done to his brain. He was comforted by minutiae. His mortal fears could be assuaged only by an encyclopedic command of detail.

Paul was a professional builder of narratives. He was a teller of concise tales. His work was to take a series of isolated events and, shearing from them their dross, craft from them a progression. The morning’s discrete images—a routine labor, a clumsy error, a grasping arm, a crowded street, a spark of fire, a blood-speckled child, a dripping corpse—could be assembled into a story. There would be a beginning, a middle, and an end. Stories reach conclusions, and then they go away. Such is their desperately needed magic. That day’s story, once told in his mind, could be wrapped up, put aside, and recalled only when necessary. The properly assembled narrative would guard his mind from the terror of raw memory

Even a true story is a fiction, Paul knew. It is the comforting tool we use to organize the chaotic world around us into something comprehensible. It is the cognitive machine that separates the wheat of emotion from the chaff of sensation. The real world is overfull with incidents, brimming over with occurrences. In our stories, we disregard most of them until clear reason and motivation emerge. Every story is an invention, a technological device not unlike the very one that on that morning had seared a man’s skin from his bones. A good story could be put to no less dangerous a purpose.

As an attorney, the tales that Paul told were moral ones. There existed, in his narratives, only the injured and their abusers. The slandered and the liars. The swindled and the thieves. Paul constructed these characters painstakingly until the righteousness of his plaintiff—or his defendant—became overwhelming. It was not the job of a litigator to determine facts; it was his job to construct a story from those facts by which a clear moral conclusion would be unavoidable. That was the business of Paul’s stories: to present an undeniable view of the world. And then to vanish, once the world had been so organized and a profit fairly earned. A bold beginning, a thrilling middle, a satisfying end, perhaps one last little twist, and then . . . gone. Catalogued and boxed, stored for safekeeping.

All Paul had to do was to tell today’s story to himself and it would disappear. To revisit the images over and over in his head. Salvation through repetition.

But as it turned out, a flaming corpse over Broadway was only the second most terrifying thing that Paul Cravath would see that day.

Later that evening—after his secretary had departed to her Yorkville apartment, after his senior partners had retired to their upper Fifth Avenue three-stories, long after Paul had failed to leave for his Fiftieth Street bachelor’s flat and instead penned so many notes with his rubber Waterman that the blister popped on his right middle finger—a boy arrived at the office door. He bore a telegram.

“Your presence is desired immediately,” read the message. “Much to discuss in strictest confidence.”

Graham Moore is the New York Times bestselling author of The Sherlockian and the Academy Award–winning screenwriter for The Imitation Game, which also won a Writers Guild of America Award for best adapted screenplay. Moore was born in Chicago, received a B.A. in religious history from Columbia University in 2003, and now lives in Los Angeles. 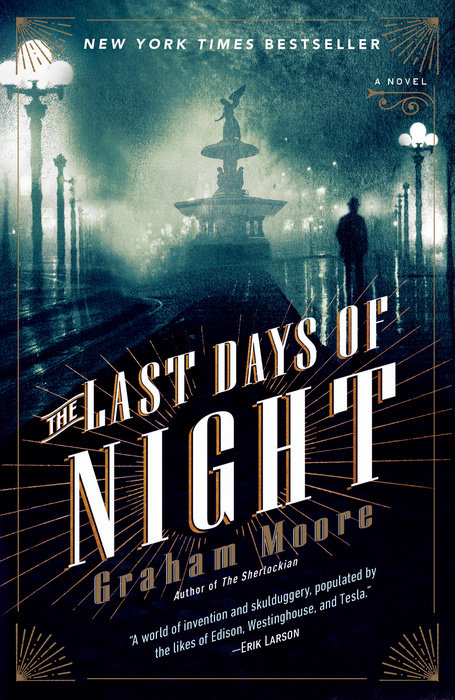