NEW YORK TIMES BESTSELLER • The star of the hit Netflix series Tidying Up with Marie Kondo and author of The Life-Changing Magic of Tidying Up helps you visualize your ideal lifestyle.

Japanese decluttering guru Marie Kondo has revolutionized homes—and lives—across the world. Now, Kondo presents an illustrated guide to usingher acclaimed KonMari Method to create a joy-filled home that works the way you need it to.

Spark Joy features step-by-step folding illustrations for everything from shirts to socks, plus drawings of perfectly organized drawers and closets. Kondo also answers frequently asked questions, such as whether to keep “necessary” items that may not bring you joy. With guidance on specific categories including kitchen tools, cleaning supplies, hobby goods, digital photos, and even building your own personal “power spot” in your home, this comprehensive companion is sure to spark joy in anyone who wants to simplify their life.

An excerpt from Spark Joy

Life truly begins only after you have put your house in order. That’s why I’ve devoted most of my life to the study of tidying. I want to help as many people as possible tidy up once and for all.
This doesn’t mean, however, that you should just dump anything and everything. Far from it. Only when you know how to choose those things that spark joy can you attain your ideal lifestyle.
If you are confident that something brings you joy, keep it, regardless of what anyone else might say. Even if it isn’t perfect, no matter how mundane it might be, when you use it with care and respect, you transform it into something priceless. As you repeat this selection process, you increase your sensitivity to joy. This not only acceler-ates your tidying pace but also hones your decision-making

What sparks joy for you personally? And what doesn’t?

The answers to these questions represent a major clue for getting to know yourself as a recipient of the gift of life. And I am convinced that the perspective we gain through this process represents the driving force that can make not only our lifestyle, but our very lives, shine.
Some people have told me that they had almost

nothing left after discarding those things that didn’t spark joy and, at first, didn’t know what to do. This reaction seems particularly common when people finish tidying their clothes. If it happens to you, don’t be discouraged. The important thing is that you have noticed. The real tragedy is to live your entire life without anything that brings you joy and never even realize it. From the moment you finish tidying, you can begin to add a new zest to your home and to your life.

Only two skills are necessary to successfully put your house in order: the ability to keep what sparks joy and chuck the rest, and the ability to decide where to keep each thing you choose and always put it back in its place.

The important thing in tidying is not deciding what to discard but rather what you want to keep in your life. It is my hope that the magic of tidying will help you create a bright and joyful future.

Enchanted with organizing since her childhood, Marie began her tidying consultant business as a 19-year-old university student in Tokyo. Today, Marie is a renowned tidying expert helping people around the world to transform their cluttered homes into spaces of serenity and inspiration.

Marie has been featured on more than fifty major Japanese television and radio programs as well as in The New York Times, The Wall Street Journal, The Times of London, Vogue, Ellen, the Rachael Ray show, and many more. She has also been listed as one of Time magazine’s 100 most influential people. 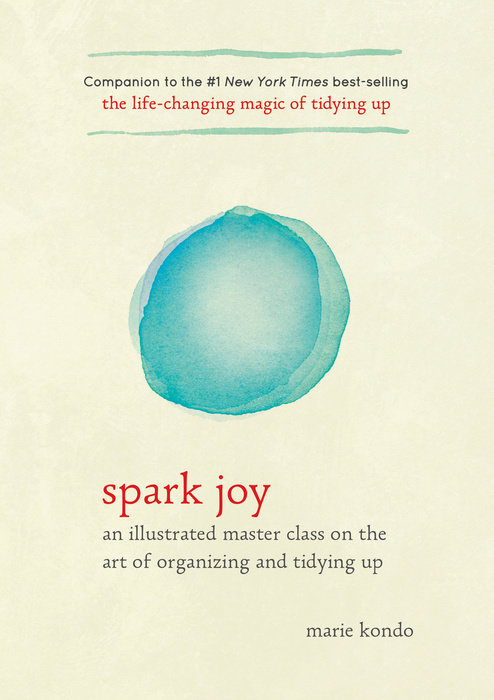