In this scintillating novel from the author of My Tempting Highlander (“Another exciting and heartwarming time-travel romance.”—Vonnie Davis), the ladies’ man of Loch Ness meets a hot-tempered lass who sets his heart aflame.

Though part of a legacy of time-traveling sisters, Lilia Sinclair is planted firmly in twenty-first-century Edinburgh. Her granny’s matchmaking with thirteenth-century Highlanders isn’t about to lure her into the past, especially as ancient Scotland enters troubled times. After all, Lilia is blessed—or cursed—with dire prophetic visions. To protect herself, she’s put up an icy emotional wall no man could cross—until a pair of gorgeous, rippling arms breaks right through.

Graham MacTavish is pure trouble. Once the dragon bound to Loch Ness, he’s transformed into a philanderer of the first order. In fact, because of his dalliances with other men’s wives, a rival clan wants his head on a pike. Before he provokes an all-out war, Graham is banished to the twenty-first century, where he must win Lilia’s hand—or return to die. But after meeting a lass as fierce as any Highland warrior, Graham knows one thing: life with Lilia, in any century, is a fate to embrace.

Praise for My Seductive Highlander

“Ms. Greyson pens a masterpiece of visions, kilted passions, and humor to cast a spell of utter delight over her readers. My Seductive Highlander is a perfect romance you won’t want to miss.”—Vonnie Davis, author of both the Highlanders Beloved and the Black Eagle Ops series

“Maeve Greyson weaves a magical tale. My Seductive Highlander will have you holding your breath and flipping pages late into the night.”—Lisa Kessler, author of the Moon series

“Just like all the other books in this series, I loved it. I’m sad to see the series end.”—A Crazy Vermonter’s Book Reviews

“The epilogue literally had me in tears—it was so lovely and such a great way to end this series.”—Kilts and Swords

An excerpt from My Seductive Highlander

“Dammit, man! Did ye no’ think to learn her name afore ye decided to bed her?” Gray MacKenna, chieftain of Clan MacKenna, moved to the edge of his seat as though ready to lunge across the room, wrap his hands around Graham’s throat, and choke the livin’ shit out of him.

Graham MacTavish edged back a step whilst rubbing the nape of his neck. He stole a quick glance about the room. All eyes were locked on him and ’twas no small wonder. This was thrice in a fortnight that the MacKenna had publicly chewed his arse over what he had honestly deemed as sound choices at the time that he’d made them—but apparently, once again, he’d chosen poorly.

Dammit all ta hell and back. Graham swiped a hand across his mouth, vainly attempting to wipe away any forthcoming words that might damn him even further. He’d ne’er picked his words wisely. He thought back to the particular debacle in question. Nay. Neither lass had hinted at their surnames. Why had the one no’ mentioned her husband was bloody chieftain to the Buchanans?

Ah well . . . it doesna verra well matter now. What’s done is done. He squared his shoulders and locked his fists to the small of his back. Lifting his chin, he boldly met Gray’s infuriated glare. “I didna take her to m’bed. We stayed in the stables.”

From the purplish shading of the MacKenna’s face and the vein twitching along the man’s temple, perhaps that was no’ the best defense Graham couldha chosen. He’d better try again. “But ye’ll be pleased to know, I didna lift any of their cattle—nor a single horse this time.”

“I should turn ye over to the Buchanan and be done wi’ ye.” Gray huffed out a rumbling growl, fixing Graham with a murderous look. The sorely annoyed chieftain threw himself back in his ceremonial chair centered on the dais. The great meeting hall fell silent, all poised to hear what Graham’s punishment would be.

Graham’s gut tightened. That would no’ be good at all t’be turned over to the Buchanans. But if that was the MacKenna’s wish . . .

Snorting out a silent humorless laugh, Graham shook his head. ’Twould be a damn shame to die o’er one such as that lass and her maid. The women’s shrill tirades and dead aims with clods of dried horse shit on the morning after the quite enjoyable romp had taught him a thing or two—mainly that ye best ne’er get too deep in yer cups when charmin’ the lasses because their druthers could sorely change when ye sobered up and faced them the next day.

A soft clearing of a throat drew Graham’s attention to the chieftain’s wife sitting quietly at her husband’s side. Lady Trulie smoothed a hand atop her husband’s tensed forearm and sat taller in her chair. “Now, now. We can’t do that, Gray. You know what would happen if we turned him over to the Buchanans.”

She leaned forward the slightest bit, staring down at Graham from the raised platform as though he were a disobedient child. “We understand your need to experience all that you missed while cursed but”—Lady Trulie’s face darkened like a building storm—“dammit, Graham, pull your head out of your ass and stop endangering the peace and safety of this clan just because you can’t keep your britches on and your hands off what belongs to somebody else.”

Britches? What the hell are britches? Perhaps the Lady Trulie was referrin’ to his trews? Actually, he’d nay even removed his léine while samplin’ the sweet lasses, but perhaps now was nary the time to get into the particulars. 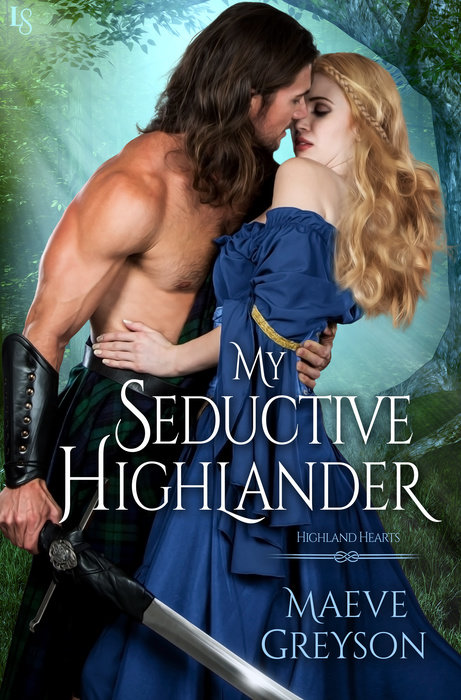