A Pip and Flinx Adventure

Unlikely duo Pip and Flinx return to right another wrong in this all-new sci-fi adventure from one of the genre’s living legends.

The unexpected return of an old friend draws Flinx and Pip to the backward planet of Largess, whose seal-like denizens’ primitive technology and fractious clan politics have kept a wary Commonwealth from a profitable trade relationship. But now a rogue human employing forbidden advanced weaponry threatens to ignite a war among the Larians. And Flinx is just the man to stop it before it starts.

But once on Largess, Flinx discovers that his empathic abilities—usually his greatest asset—are rendered useless by the natives’ unique language, which is sung rather than spoken. Worse, the abduction of a powerful chieftain’s daughter has raised tensions to the boiling point. Now Flinx must depend on his own mettle—and of course Pip, the devoted minidrag with the deadly edge—to right wrongs, mend fences, and battle a cold-blooded adversary armed with enough firepower to blow them all away . . . and destroy the chance for peace in Largess forever.

An excerpt from Strange Music

“There’s a whale here to see you.”

The pale pink sunsuit covered Clarity Held from neck to feet. Lighter than gossamer, it was akin to wearing a moderate blush. Photosensitive, it did what was necessary to allow the body to produce vitamin D while simultaneously preventing the wearer’s epidermis from burning. Brilliant as the work of any jeweler, the slender emerald coils of the dozing Alaspinian minidrag Scrap lay draped around her neck.

Though Flinx wore a similar suit for similar reasons, his was all but transparent. As his olive-hued skin was much darker than Clarity’s, he required proportionately less protection from Cachalot’s burning tropical sun. The bright yellow star beamed down through a smattering of scattered cumulus that hung like cotton in a baby-blue sky.

Though there was some moderate wave action beneath them, it did not jostle the platform that sustained their home. Hydrophobic construction materials kept it sufficiently elevated so that only the occasional breaking crest splashed against the underside. Small high-efficiency wave generators moored aft of their residence combined with solar coatings and energy storage to provide ample power for their needs irrespective of the weather.

With a sigh Flinx set aside his imported antique fishing pole, careful not to make contact with the thumbnail-size stunbar that hung at the end of the high-test line. So far the day’s catch consisted of a pair of tubular o’otts, slick with the extruded oil that let them shoot through the tepid water, and a single migratory thamm. Not much more than a drifting brown mouth lined with electrified nodules, the thamm would be suitable only for the soup pot.

Not much of a fisherman, he told himself. Not even after living on Cachalot for a year. His risible efforts were a running joke among the local dolphins.

A brilliant crimson, blue, and green shape spiraled down to wrap itself around the hoop mast that served as a wind stabilizer for the extended dwelling. Though Pip seemed far more at home on Cachalot than any human, the truth was that to survive here she needed something only humans could provide: a dry surface. Unlike many of the Terran snakes she so closely resembled, she was not a particularly good swimmer. And her formidable arsenal of corrosive neuro- toxin was useless for defense underwater.

It served superbly for bringing down native aerial lifeforms, however.

Squinting at the mast, Flinx saw that she had caught a wispl. Little more than airborne fragments of netting with eyes, wispls drifted in vast flocks over Cachalot’s world-girdling ocean, surviving by consuming the tiny eggs of those sea creatures who utilized the wind to disperse their offspring. As he watched, she munched casually on the fragile meal, radiating contentment and not in the least distracted by the enormous gray shape that rose partially out of the water on the port side of the residence, scarcely an arm’s length from her master.

Turning away from his winged companion, Flinx confronted a fin whale that was longer than his home. Clarity’s announcement had been superfluous: he had sensed the approaching presence long before it had arrived. Like all its kind (except for the dolphins, who were endlessly effervescent and irrepressible, sometimes irritatingly so), the fin’s emotional state suggested vastness and warmth, intelligence and reassurance. It reminded him of nothing so much as a great old tree. Like the rest of the perfectly hydrodynamic form, the head was sleek. Water cascaded from the fluted flesh of the lower jaw as the visitor lifted its huge head to regard Flinx out of one contemplative eye.

Sylent, who wasn’t as reticent as his name implied, replied in the profoundly deep basso of his kind. In their speech the baleens were less weighty than the catodons but more somber than the orcas or porpoises: neither profound nor playful.

“Daylight Brightness to You, Flinxman. Goes well your Life, swims fast your Mate?”

“Both wet a-going, thank you graciously. What propels your fine visit?”

“News I bring. From Farefa’are’i. Of a New Person come see You.”

The spaceport? Flinx tensed. He and Clarity were not expecting company. It was his experience that visitors meant nothing but trouble, sometimes of the potentially lethal kind. On the other hand, whoever had arrived had gone some way toward dispelling such concern by making the effort to announce themselves in advance.

But why do so via cetacean? A simple “hello” via communit would have been much quicker. It hinted at a need for formal subterfuge. He remained wary yet intrigued.

“Did the New Person give a Naming?”

Water rushed beneath the hovering house complex as Sylent’s enormous head slid slowly back down into the water.

Unusual name, Flinx mused. Then he smiled to himself. “Surprise” was likely not the name of the visitor but a description of his or her arrival. It also helped to explain why the still-unknown individual had chosen this way of announcing their arrival.

Flinx knew it was always time for the big baleens to feed, but he made no effort to stay the bearer of unexpected news. “Eat well, Sylent, and with my thanks go.”

“So going, Flinxman. Cold Upwellings to your Mate.”

And with a farewell lobtailing that soaked the port side of the habitat, the fin whale was gone.

Flinx pondered a moment, then headed toward the living quarters that occupied the center of the residential platform. Clarity needed to be told. That visitors were a rare thing bothered neither of them in the least. Coming to this world in search of peace and privacy, they had discovered both in abundance. Cachalot, its scattered human inhabitants, and its millions of cetaceans had embraced the two newcomers and their needs without qualification, without question. It was as good a place in the Commonwealth as any in which to lose oneself without completely cutting the bonds of civilization. For more than a year now they had both been content, dwelling in isolation, humidity, and connubial bliss. While not regarded as intrusive, neither was visitation encouraged.

It appeared that someone had sought him out, however. That was flattering, provided they had not come seeking his head. Or its contents. Few knew who he was. Even fewer knew what he was. Less than a handful were aware of what he could do, or what he had done. In Clarity’s company he sought anonymity and a little happiness, and had managed to find both.

So he and his companion would welcome whoever had come looking for him, with food and drink and open arms, while keeping more lethal arms at the ready.

He did not have to call Pip down from her high perch. His feelings, which the serpentine alien empath readily perceived, were enough to bring her to him. With her head resting on his shoulder, she used slitted eyes to search his face while a part of her mind melded with his own. Finding concern there but not fear, she folded her pink and blue wings against her flanks, coiled a portion of her muscular shimmering self loosely around his neck, and went to sleep.

A Pip and Flinx Adventure 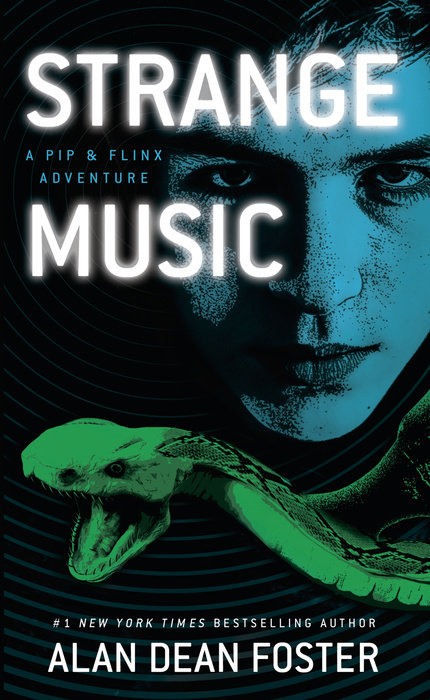